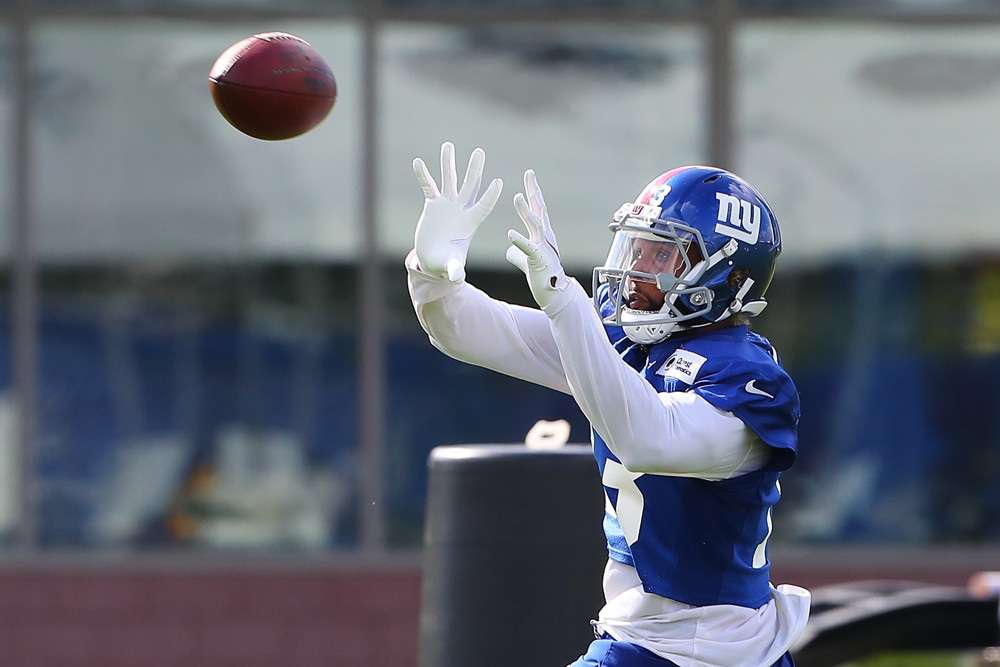 As I said in my Draft Day Philosophy piece, tier-based rankings can be used as a guide when drafting. It is best to do your own rankings but never fear, the Fantasy Professor is here. I have put together my tier-based wide receiver rankings for PPR scoring.

We all know who the top dogs are at the running back position. And, if you have not participated in any mock drafts yet, I suggest you do so. Running backs are going off the board so fast that by the fourth round you will be left with scraps.

Draft players at the back end of tiers to maximize value.

Using the tier-based wide receiver rankings will help you keep track of the wide receiver studs still on the board so that you can stack up on running backs early.

Let’s dive into some rankings!

AB is the consensus WR1 anywhere you go. Show me where he isn’t and I will have questions for this person. Since 2013 Brown has averaged 116.4 receptions, 1,569.6 yards, and 10.4 touchdowns. He is a lock for over 150 targets and still has the speed to break the big play.

In 2016 Odell Beckham had 169 targets in a full 16-game slate. In four games last season before he got injured, OBJ was on pace for 164 targets. He is the big play waiting to happen along with the model of consistency. His touchdowns in his first three seasons: 12,13,10.

D-Hop could actually exceed last year’s brilliant season if we get a full-16 of DeShaun Watson. In seven games with Watson, Hopkins scored seven touchdowns. In Week 7 against the Seahawks, Watson provided Hopkins with an eight-catch, 224-yard, one touchdown game. Last year’s WR1 in standard scoring has a tall ceiling if Watson stays healthy.

Julio Jones is perhaps the most gifted athlete at the wide receiver position. At 6’3, 220 pounds Jones is just as fast as the Top receivers on this list. Last year’s three touchdowns were flukey and there is obvious positive regression in store for the eight-year pro. In 16 games Jones had 88 catches for 1,444 yards in 2017.

Allen is the clear-cut number one target in the Chargers offense. Last season, a full slate of games proved to be the recipe for Fantasy success for the six-year pro. Allen will share the field with Mike Williams, Tyrell Williams, and Travis Benjamin. With Hunter Henry on injured reserve, there is touchdown upside for the league leader in red zone targets among wide receivers last season (24).

Michael Thomas has been a stud since he entered the league in 2016. He improved last season in targets (149), receptions (102), and yards (1,245). His touchdowns took a dip from nine in his rookie year to five, but Mark Ingram being out the first four weeks should help facilitate positive regression. Most people think Ingram’s absence will help Alvin Kamara- I think Thomas sees an increased target share in these games as well, especially in the red zone.

Mike Evans is a target monster. 2016 saw Evans targeted 173 times. In 15 games last season Evans had 136 targets. The addition of Chris Godwin in the starting lineup will help Evans see less double teams. Evans is due for a double-digit touchdown season as he had in 2014 had 2016. Once Jameis Winston is back in the lineup, Evans will be a WR1 for the rest of the season.

Adams is now the No. 1 WR for Aaron Rodgers and the Packers. Although he has never had a 1,000-yard season or had more than 75 catches, Adams should be able to exceed those numbers this year. He has had 12 and 10 touchdowns in each of the past two seasons and Aaron Rodgers’ number one target has scored double-digit touchdowns since 2014.

Fitzgerald has had over 100 receptions in each of the last three seasons. He is a PPR monster out of the slot and has shown no signs of slowing down. The addition of Sam Bradford, despite the bad reputation, is going to benefit Fitzgerald’s Fantasy output. Bradford loves to utilize his slot receiver and Fitz provides a big target for the veteran. If Bradford is to get hurt, rookie Josh Rosen’s best chance at success is to pepper the future Hall of Famer with targets.

Doug Baldwin could be in store for a large target share in 2018. His career-high is 125 targets in 2016 when he had 94 catches, also a career-high. If he is healthy (and that is in question) Baldwin should be able to match that workload from two seasons ago. Baldwin scored 14 touchdowns in 2015 and Jimmy Graham’s 26 red zone targets from last year are vacant.

Jarvis Landry had 161 targets for 112 catches last season. It was the first time he had been under 1,000 yards (987) since his rookie season. However, 2017 also saw a career-high in touchdowns for Landry with nine. Landry’s targets should come down with the plethora of weapons the Browns have. I project Landry to get 130-140 targets which should still provide the PPR stud with 90-100 receptions and over 1,000 yards receiving.

T.Y. Hilton was the WR5 overall and led the NFL in receiving yards in 2016 in a full season with Andrew Luck. Hilton is the number one option for Luck and the Colts offense and he has played in 16 games for three straight seasons. Excluding last season with Jacoby Brissett, Hilton had at least 130 targets from 2013 to 2016. He is a superstar and is being undervalued – even by me as he is my WR13.