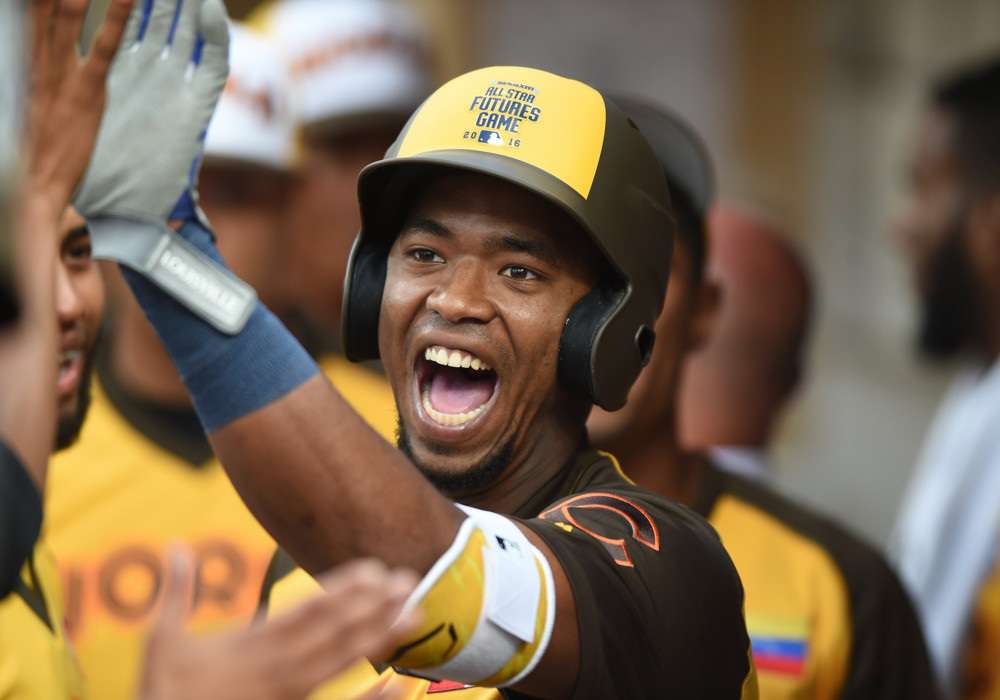 Don’t you dare quit on your fantasy baseball team now. This is the time of year when things really get interesting. The trade deadline is now a distant memory, but we have roster expansions and subsequent September prospect call-ups to look forward to. If your league has any sliver of competitiveness, these guys below will likely be long gone when the news breaks that they’re getting the call to the show. So, how do you offset that and make sure you can land a few impact prospects for the stretch run? Add them now of course. Prospect stashes are low risk, high reward.

Now, a lot went into these rankings. The below is a combination of positional need at the Major League level, proximity to the Majors, current production, and unfortunately, whether service time might factor in. That last reason is why you’ll see some big names a tad lower than you might have expected.

This one was easy. The White Sox are once again well out of playoff contention and don’t exactly have what you would call an all-star caliber outfield. Meanwhile, roughly 750 miles away in Charlotte, North Carolina, their top prospect is destroying baseballs and giving Triple-A pitchers nightmares. In 35 Triple-A games, Jimenez has slashed .351/.393/.672/1.065 with 10 doubles and 11 home runs. On top of that, he’s only striking out in 12.8% of his plate appearances.

Very few prospects can combine his power, hit tool, and plate discipline all into one package. When Jimenez gets the call, which is likely very soon, he has the potential to be a high impact addition for the stretch run. The type of addition that pays major dividends.

Eloy Jimenez showing off his oppo power with a 3-run bomb for @KnightsBaseball. pic.twitter.com/nWdJ1tNc6F

Meadows might have exhausted his prospect status earlier in the season, but you know what? Close enough. Meadows finally made his long-awaited Major League debut on May 18th and immediately showed why he’s been a top prospect for the last few seasons. In 154 at-bats, Meadows hit .292 and was on a near 20/20 pace before being sent back down to Triple-A, traded to Tampa Bay, and kept in Triple-A.

Kevin Kiermaier and Mallex Smith’s starting spots are fairly safe, but then you have Carlos Gomez hitting .215 out in right field. It makes a lot more sense for the Rays to give Meadows a look come September in hopes he can step in as a full-time starter in 2019. Once he’s up, Meadows can contribute across the board without hurting you in any single category.

After a bout of wildness mid-season, Kopech turned a corner in a big way following some extra time off during the Triple-A All-Star break in early July. His last six starts before the break yielded an 8.4 BB/9, including one outing where he only threw 35 of 86 (41%) pitches for strikes. Yikes. Control like that isn’t going to get you anywhere. But a 0.9 BB/9 certainly will. That’s Kopech’s walk rate in six starts since the break. Much better, right?

He’s always had the stuff to dominate Major league hitters, but as you can see, the control comes and goes as it pleases. Dylan Covey and his 6.06 ERA better keep an eye out. Once Kopech takes Covey’s rotation spot, which should be any day now, expect elite strikeout numbers at the very least with the potential for some strong ratios as well if he can keep his control in check.

With Johan Camargo currently manning the hot corner in Hot-lanta, Riley has a golden opportunity to get the call and run with the role down the stretch. Apparently, no one has told him that as he’s struck out in 50% of his plate appearances over the last week. However, he’s still hitting for a high average, so, not all is bad.

Now, Camargo hasn’t been bad by any means. He’s actually been playing fairly well with an OPS hovering around .800. But he’s not the long-term answer at third for Atlanta. Riley is. If Carmago struggles at all to close out August, expect the Braves to call up Riley come September. His combination of power and batting average will give him plenty of value in fantasy leagues.

I’m not even sure the Met believe themselves anymore when it comes to not calling up Alonso. I mean, have you taken a look at the Mets depth chart lately? First base is wide open and the current minor league RBI leader is more than ready to seize that spot and run away with it like Road Runner running away from Wile E. Coyote in the Looney Tunes.

Nobody in baseball, including J.D. Martinez, can match Alonso’s 105 RBI. Along with those RBI, Alonso has 29 home runs and a .285 batting average. The last 10 games have been even more dominant with a .368 average, five dingers, and 15 RBI. He’s ready.

Peter Alonso hit a bomb to top all bombs! pic.twitter.com/MBEX1PXwpy

Since the all-star break, Oakland has the 3rd lowest team ERA behind only Cleveland and Boston. So why would they need a guy like Luzardo? Go take one look at their depth chart and you’ll see why. The odds of Brett Anderson staying healthy and Edwin Jackson staying effective are slim to none. And with Oakland battling for the AL West crown and/or a wild card spot, they’ll need all the help they can get.

For the season, Luzardo has posted a stellar 2.30 ERA, 1.01 WHIP, 2.2 BB/9, and 10.8 K/9. In fact, the four earned runs he allowed last start is one more than he allowed in his previous 10 starts combined. Yeah, he’s been pretty damn good lately. Luzardo’s three plus pitches, plus control, and veteran-like poise on the mound should allow him to succeed right out of the gate.

If he had continued to hit well earlier in the season, there’s a strong possibility that Stewart is already a full-fledged member of the Tigers everyday starting lineup. However, various bouts of inconsistency have kept Stewart at Triple-A… for now. The Tigers aren’t going anywhere this season and have been patching together their outfield around Nicholas Castellanos.

Promoting Stewart would be a major upgrade for the Tigers in left field and would give them a chance to get a long look at him before making him a starter in 2019. Stewart’s average currently sits at a lackluster .246 this season, but that has come with 21 home runs and 68 RBI. On top of that, Stewart has improved his walk rate from 10.1% to 11.9% and cut his strikeout rate down from 24.9% to 21.3%.

The AL East might be out of reach with how Boston is playing, but the Yankees still have a very good chance at securing one of the two wild-card spots. They added J.A. Happ and Lance Lynn at the deadline to bolster their pitching staff, but still find themselves needing a starter two weeks later.

Sonny Gray and his 5.52 ERA haven’t been getting the job done and now C.C. Sabathia is on the DL with discomfort in his surgically repaired knee. He’s only expected to miss a start or two, but again, he’s a 38-year-old hefty hurler with discomfort in a surgically repaired knee. Sheffield has been nothing short of dominant in the upper minors this season with a 2.19 ERA, 1.10 WHIP, and 9.6 K/9 through 107 innings.

This will only happen if there’s an injury to one of the current Nationals starting outfielders. FOR THE LOVE OF JOBU’S RUM, DO NOT LET BRYCE HARPER OR JUAN SOTO GET HURT. If Soto goes down, you might see a grown man cry. Let’s just hope that doesn’t happen. If playing time does open up, Mr. Robles is patiently waiting in Triple-A.

Robles isn’t exactly tearing the cover off the ball since returning from a gruesome elbow injury. But what he has working for him is a Major League ready skillset, incredible plate discipline (21 walks to 19 strikeouts), and experience from a cup of coffee with the Nationals last September. Don’t expect much power, but Roble’s plus speed would be a big asset to fantasy owners down the stretch.

This is the perfect example of when service time plays a factor. It’s blatantly obvious that Guerrero is ready to hit in the Major Leagues. And not just hit, I mean hit at an All-Star caliber level. Heck, he has been basically since Opening Day back in April. But the Blue Jays have no incentive to play him. Zero. Ziltch. None. Would they benefit from it in the short-term? Absolutely. They currently are playing a long-time catcher at third and have aging and underwhelming Kendrys Morales at DH.

Vlad is head and shoulders better than anything Toronto currently has in its lineup, but bringing him up in 2018 starts his service clock. While the chances of a 2018 Vlad promotion are becoming more and more unlikely, the enormous upside is worth stashing in all leagues if you have the room. You know, just in case.

Alex Verdugo (OF – LAD) – The Dodgers outfield is currently set, but shaky. Puig has been dinged up off and on this season and both Joc Pederson and Matt Kemp can resemble Dr. Jeckyl and Mr. Hyde at times. Verdugo has been up a couple times already and is first in line to get the call if playing time opens up. Verdugo’s power and speed only grade as average at best, but his hit tool is easily plus and is apparent in his Triple-A leading .346 batting average.

Garrett Hampson (2B – COL) – Hampson already got a cup of coffee with Colorado last month when D.J. LeMahieu was on the shelf and played fairly well in his limited shot. If LeMahieu or Trevor Story end up missing any time moving forward, Hampson and his .300/40SB upside can slide into the starting lineup and provide solid fantasy value.