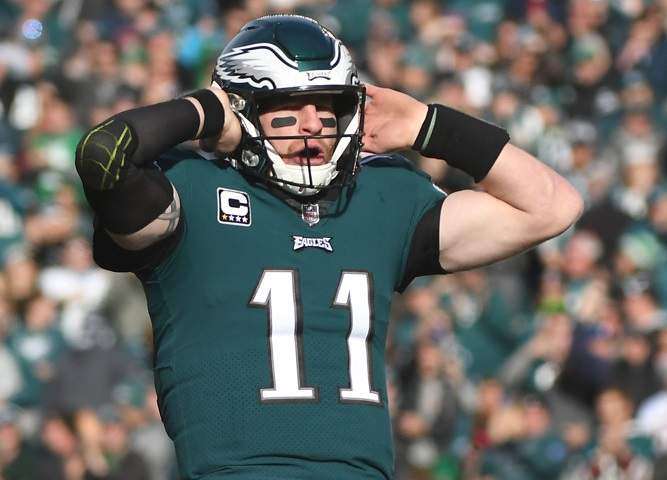 There are a lot of injuries to keep an eye on as we head into Week 3 of the NFL season, especially at the running back position. You’ll notice a few names inside the Top 30 in my Fantasy Football Week 3 Rankings, who you may not have predicted would be there two weeks ago. There will be constant updates in my standard and PPR rankings as we get practice reports and injury news leading up to kickoff each Sunday.

As you’ll see below, I’ve highlighted some of the players I like and dislike more than others, using the Expert Consensus Rankings on FantasyPros. As we get into tougher matchups, this may help you decide if you have to start or sit a certain player. Feel free to hit me up with any questions @chrismeaney.

This is by no means a friendly environment for a visiting quarterback. Jimmy Garoppolo faired alright in the opener in Minnesota, though. He was just the seventh QB to throw for 200 yards against the Vikings over the last 18 games and ended up with a decent fantasy day. Arrowhead is a tough place to play, but KC doesn’t have the same type of defense as Minnesota. The Chiefs have allowed the most fantasy points to QBs and the most passing yards over the first two weeks. If Pat Mahomes and company are going to score (and they are), Jimmy G will have to try and keep pace. The FantasyPros consensus has Garoppolo outside the Top 10, I have him in there. Either way, you’re starting him.

Carson Wentz is cleared to start Sunday, which will be his first game since suffering a torn ACL last season in Week 14. Wentz was looking like the league’s MVP at the time of the injury as he had 33 touchdowns and seven interceptions. Well on his way to a top finish in fantasy at the position. The matchup this week is nice, but don’t be surprised if Wentz shows a bit of rust in his first game. Alshon Jeffery remains sidelined, deep threat Mike Wallace has been placed on IR, left tackle Jason Peters is questionable and Jay Ajayi is likely out. Don’t expect a lot of zone reads or quarterback runs (23 rushing yards per game in 2017) in Wentz’s first game. There are still plenty of weapons in Zach Ertz and Nelson Agholor for Wentz to have a QB1 day, but know there is some risk involved. I never thought I would say this, but if you are somehow 2-0 because you started Ryan Fitzpatrick as your QB when Wentz was sidelined, you almost have to go Fitz again, right? Ride out the magic.

The Arizona Cardinals offense has looked miserable to start 2018 (last in yards, passing yards, and points) and a lot has been made of David Johnson’s performance. Is it really on him, though? He hasn’t looked great, but neither has Sam Bradford. Arizona only ran one play on the Rams’ side of the field last week and they’ve ran eight plays inside the red zone in two games. Let’s be honest, Mike McCoy is not using DJ properly.

Many are upset with how David Johnson is being used in the passing game, but Arizona is also just running him mainly inside. Could mix in some more outside runs for someone with Johnson’s athleticism. pic.twitter.com/pWtBlrOp4o

While not using Johnson on the outside is puzzling and part of the problem, you should be more concerned he’s averaging 14 touches per game. Rookie backup Chase Edmunds has nine catches which are three more than DJ. In 2016 he scored 20 touchdowns and averaged 23.3 touches per game. At this pace, he’ll be lucky to score seven-to-ten touchdowns. I wouldn’t sell him just yet as his value is super low. In fact, I think there’s a good buy-low opportunity and he’s worth the risk, but don’t spend too much. Johnson is likely an RB2 in PPR formats from here on out, but we all know a change at the QB position and a few adjustments could put him in that RB1 conversation again. At least he’s healthy, which is more than you can say for a few running backs at the moment. Tough matchup this week, but worthy of your start.

Just two weeks in the books and you can make the case for benching Derrick Henry. The expert consensus on the  FantasyPros Week 3 rankings for Henry is RB34. That’s flex material. We knew this backfield would give people headaches, but it’s Dion Lewis who has the edge right now. Lewis has 35 more yards on the ground than Henry, and he’s out-touched him 36-29 overall. Henry only has one catch to Lewis’ six and that’s what hurts his value. Predicting game script is huge in determining potential success from these two and with a matchup against the Jaguars, it’ll likely be Lewis again who has the better day.

I’m not sure why Austin Ekeler is ranked so low in standard formats. I know his value lies in PPR leagues, but Ekeler has been a big part of this Chargers’ offense and he’ll likely be a big factor against the Rams. It feels weird to rank two running backs from the same team in the top 30 in my Week 3 rankings, but Philip Rivers has been using both Melvin Gordon and Ekeler in the passing game. Ekeler has been very Danny Woodhead-like for Rivers as he has 116 rushing yards on 16 carries and eight catches for 108 yards. He’s third on the team in targets, catches and receiving yards. The Rams have a solid secondary and there’s a good chance the Chargers are playing from behind which will likely mean more work through the air. As the old saying goes, yards are yards.

Ekeler is someone I would start over Jamaal Williams. I’m actually surprised to see Williams ranked as a Top 30 running back with the return of Aaron Jones. Williams probably still has the starting job in Green Bay due to his pass blocking abilities and involvement in the passing game, but he wasn’t good enough to keep Jones off the field. Williams is a very risky flex play and this backfield has committee written all over it.

Latavius Murray is an RB2 this week with Dalvin Cook sidelined, and he has an RB1 upside in this matchup. The Vikings the huge home favorites and Murray could see a lot of play in the second half. Buffalo allowed a rushing touchdown to all three Baltimore backs in Week 1 and they allowed three to Melvin Gordon last week. Murray was one of my ‘must-own’ RB handcuffs for moments like this. Murray had double-digit carries in 11 of the 12 games Cook missed in the regular season, and he hit 20-plus carries in four of his last six games. Murray also scored eight rushing touchdowns in his final 10 games which included two postseason contests.

Like these Week 3 Rankings? Get more Chris Meaney on his new podcast, By Any Means. Each week he’ll bring in guests from around the industry to break down all the fantasy news you need to know for your march to the championship.