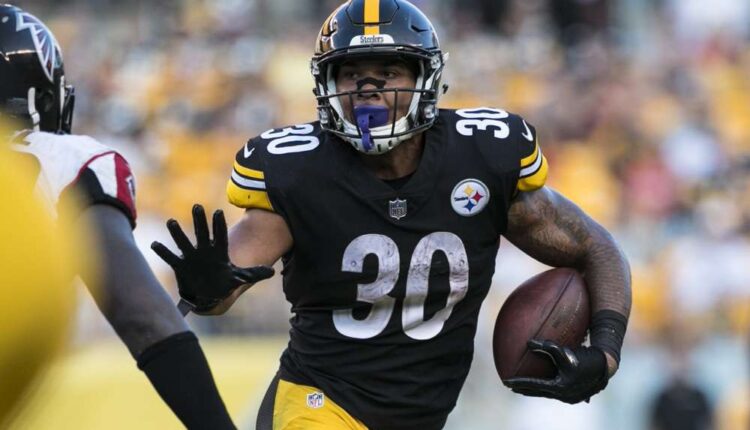 Drafting RB handcuffs is not a strategy everyone needs to take. It does, however, feel appropriate to take a running back’s direct positional backup as an insurance policy. Especially when you’ve taken the starter so early in your draft. There’s nothing wrong with protecting your investment with RB handcuffs. Even more so in deeper Fantasy Football formats. Running backs are more likely to get injured than any other position. The more potential three-down running backs you have the more of an edge you’ll have on your opponents. You can handcuff at any position really, but we’ll focus on must-own RB handcuffs.

There are several things to consider when deciding to draft RB handcuffs: First you need to be sure that you’re selecting your running back’s primary backup. It’s not ideal to draft a backup who may be involved in a timeshare should something happen to your starter. A lot of teams are employing a running back by committee offense, so focusing on a potential three-down back on a run-heavy team is something to consider.

When Dalvin Cook suffered a season-ending knee injury last season, there was no clear-cut backup in Minnesota. In fact, Latavius Murray and Jerick McKinnon weren’t drafted as RB handcuffs, and they were both picked up off the waiver wire when Cook went down. Both were valuable, but both were used pretty much equally throughout the rest of the season. Sometimes there are no sure-bet RB handcuffs as teams will lean on two or three other running backs in their system to carry the load.

You’re obviously putting the time in. Now go make it pay off! Head on over to Fantrax to start or join a Fantasy Football league. Fantrax can work with virtually any league format you can dream up.

Other times, the backup running back isn’t even worth drafting because of his skill set. Branden Oliver did absolutely nothing when Melvin Gordon suffered a hip injury a couple years back. If you’re lucky enough to draft Saquon Barkley, you don’t need to draft Jonathan Stewart. You’re better off drafting a depth piece with upside towards the end of your draft in that case. Stewart is unlikely to carry a heavy workload, or be all that productive should something happen to Barkley.

There are backups who would take on a heavy workload should something happen to the starter, but their current ADP is a hefty price to pay. Tevin Coleman filled in nicely for Devonta Freeman when he missed parts of three games with a concussion last season. Those were three of the five games Coleman had double-digit carries. If Freeman is starting, Coleman is nothing more than a fringe flex play in PPR formats. Is that something you really want to spend a sixth pick on?

When David Johnson suffered a wrist injury last season in Week 1, there was nobody who stepped up and ran away with the job. Chris Johnson, Andre Ellington, Elijhaa Penny and Kerwynn Williams all proved to be wasted adds and FAAB money. The Cardinals had to bring in Adrian Peterson, who at times showed he could play, but he finished with fewer than 30 rushing yards in three of his six games with Arizona. There’s a reason the team went out and drafted Chase Edmonds in the fourth round this past offseason. Edmonds is one of the few, true RB handcuffs out there and will get the bulk of the work should something happen to Johnson again. He had 67 rushing touchdowns and 86 catches in four seasons with the Fordham Rams. If given the opportunity, he could be a three-down back for Arizona.

CHASE EDMONDS (@ChaseEdmonds22) is projected to be the primary backup RB for the #AZCardinals pic.twitter.com/4au57pT5Rx

If you’ve already completed a draft and have Le’Veon Bell on your team, stop reading and go grab James Conner. If you’re playing in a 10-team league it’s not necessary, but it’s a must in deeper formats. Out of all the running backs drafted in the Top 10, Bell may be the riskiest. He missed the first three games of his NFL career due to a pedal lisfranc sprain. He hyperextended his knee in the final regular season game of his sophomore year, missing a playoff game. His season was cut short in 2015 after tearing his MCL and he suffered a groin injury in 2016 which resulted in offseason surgery. Bell was also suspended three games in 2016 for violating the league’s substance abuse policy. Not to mention talk of a potential holdout to start the season due to a contract dispute.

Bell owners should strongly consider drafting Conner, not only because of the injury history, but due to the potential usage Conner could have in the Pittsburgh offense. Bell has averaged 27.1 and 28.1 touches per game over the last two seasons. He had a ridiculous 406 touches in 2017 and is set to be a free agent at the end of the season. Conner would unlikely get that kind of volume, but I’ll give him the edge over Stevan Ridley, Fitzgerald Toussaint, and newly drafted Jaylen Samuels. At least for now. Samuels is certainly intriguing. This is a backfield you’ll want to pay close attention to throughout the preseason. Bell will not be playing in those games, so if you’re drafting late you’ll have an idea of which backup looked best and played with the first-team offense. Conner only totaled 144 rushing yards on 32 carries as a rookie last season but seems motivated for more work in 2018.

Todd Gurley is coming off a 19-touchdown campaign which saw him touch the ball 343 times. The Rams selected John Kelly in the sixth round this past summer and he possesses all the tools you look for in a three-down back. The Rams scored a league-high 30.1 points per game last season as their offense ran directly through Gurley. It’s possible Sean McVay cuts down on Gurley’s workload this season and should something happen, you have to believe the head coach would make good use of Kelly. If you’re spending a first or second overall pick on Gurley, back it up with Kelly.

As mentioned above, Latavius Murray wasn’t the clear-cut number one option for the Vikings when Cook went down last season. Jerick McKinnon was sprinkled in, especially early on, but it was Murray who eventually took over the early down work. Murray had double-digit carries in 11 of the 12 games Cook missed in the regular season, and he hit 20-plus carries in four of his last six games. Murray also scored eight rushing touchdowns in his final 10 games which included two postseason contests. We already know Murray can play and handle a full workload should Cook have knee problems again. Also, McKinnon has moved on to the 49ers. Murray will cost you a 13th round pick as his current ADP is RB 52, according to Fantasy Football Calculator.

McKinnon is positioned for a feature back role in Kyle Shanahan’s offense with the 49ers, but can he handle it? McKinnon had a 3.4 yards per carry mark on 159 attempts in 2016, and he hit 3.9 YPC on 150 attempts last season. He averaged 13.7 carries over the first seven games Cook missed last season, but only 8.8 in his final seven games, which included two postseason contests. He was given the first shot at filling in for Cook, but was later over taken by Murray. Matt Breida is the early favorite should McKinnon struggle or suffer an injury. Breida had a solid 4.4 yards per carry total on 105 attempts as rookie last season, playing behind the departed Carlos Hyde.

*UPDATE – Jerick McKinnon (calf) will miss the rest of the preseason, but should be ready for Week 1 according to reports.

Overvalued Quarterbacks Based off ADP in Fantasy Football