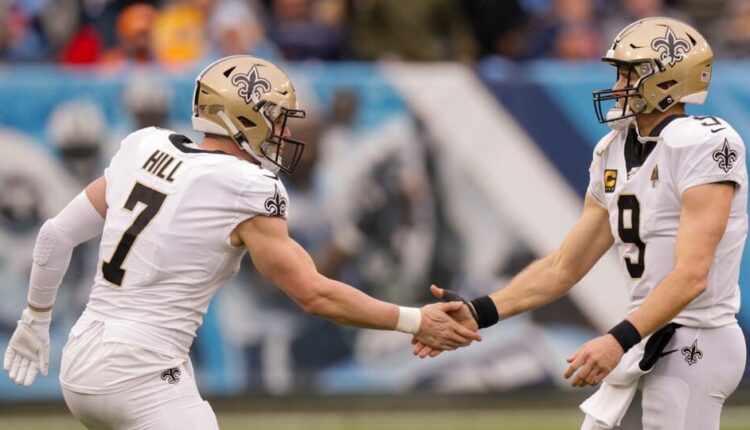 As we near the trade deadline in many leagues, it’s time for contending and rebuilding teams alike to make some final moves before the fantasy playoffs begin. Here are a couple of dynasty buys and sells to target in your leagues, but keep in mind the other team’s current situation when initiating trade talks.

All the first-round rookie picks in the world won’t help you acquire Derrick Henry if the other dynasty GM is contending for a title, and don’t attempt to sell veteran contributors like Julio Jones to teams clearly in a rebuild and not in position to vie for a championship this year.

I listed Jameis Winston as a sell candidate in last week’s article, and so it’s only fitting to discuss the other quarterback in New Orleans in our dynasty buys this week. It was reported late last week that Taysom Hill, not Winston, would start against the Falcons with Drew Brees out.

It’s worth noting that Atlanta’s secondary is among the worst in the league and has allowed the most fantasy points to opposing quarterbacks through 11 weeks. Even so, Hill’s performance was admirable, passing for 233 yards and rushing for 51 yards and two scores on the ground. He also had a 57-yard touchdown pass to Emmanuel Sanders that was called back due to offensive holding, or Hill might’ve had an even bigger day. Regardless of his passing acumen, we’ve seen that rushing production gives quarterbacks high weekly floors and ceilings in fantasy, with names like Kyler Murray and Lamar Jackson each having had breakout seasons over the last couple of years in large part due to their ability to complement their passing production with yards and touchdowns on the ground.

Denver will be a tougher matchup for Hill this week, but he has a good chance to solidify his position as the Saints’ starter going into 2021 if Brees retires at the end of this season. I mentioned last week that the Saints’ salary cap situation likely precludes them from extending Winston beyond his current one-year deal. Given the results of this recent Twitter poll, many are still skeptical of Hill’s dynasty value in the long run, and it’s very possible that he could be acquired for a second-round rookie pick in many superflex or 2QB leagues right now. If that’s the case, he’s among the best value dynasty buys right now. A potential starting quarterback with rushing floor and upside for less than a first-round pick in superflex or 2QB formats is an absolute steal.

Side note: It’s only been a one-week sample size, but Alvin Kamara‘s zero receptions on one target against the Falcons last week makes him a risky dynasty asset going forward, and I’ve previously written about him being overvalued due to the dynasty community’s failure to account for Brees’s pending retirement. If Hill continues to scramble when under pressure rather than check it down to Kamara, a large portion of Kamara’s PPR production could be in jeopardy. He’s not a must-sell, but it would be prudent for rebuilding dynasty teams to sell at peak value right now.

With Rex Burkhead out for the remainder of the season with a torn ACL, James White should resume his former role as the primary pass-catching back in the Patriots’ backfield. Though Burkhead played the entire first half against Houston prior to his injury, White played a season-high 57 percent of the snaps on offense with his second-half workload.

New England has recorded six losses through 11 weeks this season with their defense reeling from a number of COVID opt-outs and their offense struggling to produce with a lack of receiving talent. Three of their upcoming games against the Cardinals, Rams, and Bills figure to be high-scoring, and it’s possible that the Patriots could trail in the second half of each of these matchups.

In PPR formats, White could see enough target volume as a receiver out of the backfield to return flex production with upside based on matchup. Long term, White carries little value with him set to hit free agency after this year alongside a deep free agent running back class. But for contending dynasty teams in need of help at the running back position, he’s a cheap dynasty buy who could be acquired for a late second-round rookie pick or possibly even a third-round pick depending on the league.

Cole Beasley and Josh Reynolds were the Week 11 dynasty buys recommended. We’ll see how long John Brown is out, but Beasley should be a strong WR3 due to target volume with upside this week in a projected high-scoring affair against the Chargers and for as long as Brown remains sidelined by his high ankle sprain.

As for Reynolds, he took a backseat to both Robert Woods and Cooper Kupp against the Buccaneers on Monday night with just six targets to 28 combined for Woods and Kupp, but Reynolds remains a cheap buy given his upside with the Rams’ tantalizing fantasy playoff schedule against vulnerable Patriots, Jets, and Seahawks secondaries.

We received confirmation that Joe Burrow tore his ACL, MCL, and suffered other structural issues in his knee and wish him the best in his recovery. Modern medicine has advanced much in treating these devastating knee injuries that were previously career-ending, and luckily these injuries are not as concerning for quarterbacks as they are for other skill positions like running backs and wide receivers, who rely much on cutting and quick twitch lower-body movements. Because of both these factors, let’s be clear that Burrow is not a must-sell by any means.

That said, he’s likely sidelined for at least nine to twelve months, which makes it very possible that Burrow could miss time even into the 2021 regular season. The good news is that the Bengals were “encouraged” by the initial imaging results, so as of right now, there are no major worries regarding Burrow’s knee. But the early report is that Burrow also has added “structural issues” as a result of this injury, so there remain some concerns.

In fantasy football, and in dynasty formats in particular, it’s often wise to build a roster centered around minimizing risk. Teams looking to contend in 2021 should not rely on Burrow returning for the start of next season, and although rebuilding teams should still treat him as a high-potential young quarterback prospect, it would be prudent to consider the small but prevalent risk of an extended multi-year absence. Selling for an early first-round rookie pick plus another future first-round pick in superflex or 2QB formats could prove wise, allowing teams to mitigate the risk on Burrow by pivoting to another talented quarterback class plus added draft capital.

This one should be fairly obvious, but Kenny Golladay is expected to return from his hip injury for the Thanksgiving game this week. Even if he needs another week to heal, Golladay is close to coming back, which bodes ill for Marvin Jones‘s target share and fantasy production going forward.

In games where Golladay has been out this year, Jones has averaged a 19 percent target share and 14.5 fantasy points in PPR scoring. From Week 3 through Week 7 when Golladay was active, Jones’s per-game target share dropped to just 12 percent, and his fantasy production dipped significantly to just 6.5 PPR points per game. Jones can still be a serviceable fantasy play even after Golladay’s return, but contending dynasty teams should treat him more as an inconsistent flex play going forward rather than a reliable WR2.

And long term, Jones is 30 years old and on the final year of his deal with Detroit. It’s anyone’s guess as to how productive he’ll be going forward without knowing with which team he’ll sign, but he’s a risky bet given his age, and Jones is unlikely to be the no. 1 wide receiver no matter where he lands. The veteran receiver should be a priority sell candidate for rebuilding teams or contenders with ample wide receiver depth at the price of a late second-round rookie pick or better, and perhaps even for a third-round pick in shallower formats or in superflex and 2QB leagues.

Jameis Winston and Marquez Valdes-Scantling were the Week 11 dynasty sells recommended. Taysom Hill unexpectedly received the start against Atlanta in Week 11, so the sell window on Winston closed even more quickly than anticipated. Hopefully some dynasty GMs were able to take advantage and sell Winston in the few short days where his value spiked.

As for Valdes-Scantling, he struggled as predicted against a tough Colts defense and remains a priority sell for just about any late-round rookie pick. While he was still second on the team in targets behind Davante Adams, that was with Allen Lazard playing just 60 percent of the offensive snaps in his first game back from injury. Expect Lazard to overtake Valdes-Scantling as soon as this week, especially after Valdes-Scantling’s costly fumble losing the game for Green Bay in overtime.

Like Meng’s Week 12 Dynasty Buys and Sells? Check out the rest of our Week 12 Fantasy Football lineup!