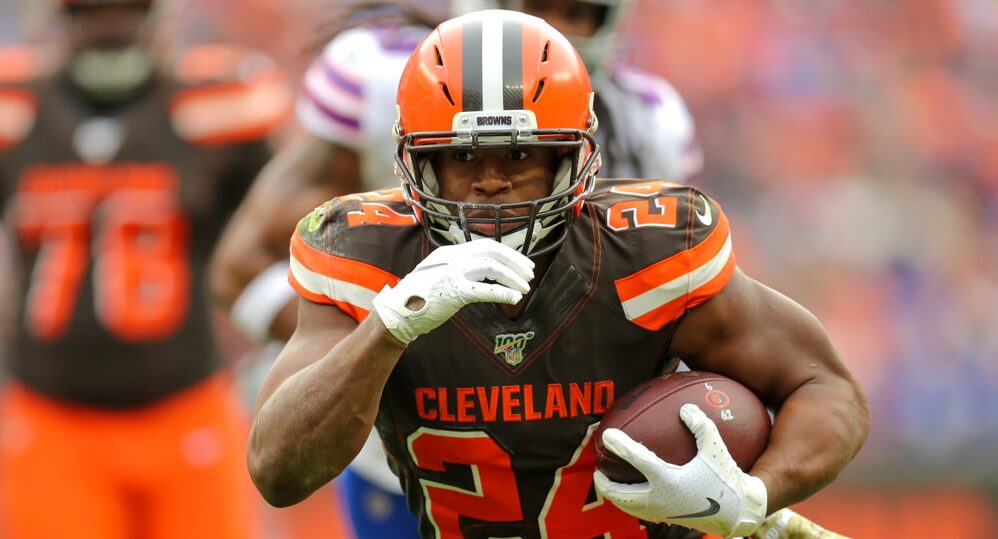 It hardly seems possible, but we are sprinting towards the finish line of the fantasy football regular season. That was evidenced last week when we saw Lambeau Field revert to the famed Frozen Tundra, as a layer of snow and ice-covered the field in the second half of Green Bay’s victory. It reminded me of Yogi Berra’s famous, “It gets late early out here” line. We are only two weeks out from Thanksgiving and the end of the fantasy regular season, and yet there are still lots of variables to weigh and situations that remain fluid. Here are a few situations I am keeping my eye on this week, as well as the first look at my Week 11 rankings.

Matthew Stafford missed his first game in nine years on Sunday, and his status for Week 11 remains in doubt. He was limited in practice all last week, but the injury was thought to be minor. Instead, Detroit ruled Stafford out on Sunday morning after an MRI revealed that Stafford has broken bones in his back. It was a brutal blow for fantasy owners, as Stafford had been the overall QB6 heading into Week 10 and still remains the QB5 on a point per game basis. The news was even worse if you had Stafford in a league where you cannot make transactions on the weekend. Stafford’s situation was a painful reminder (though I suppose not as painful as having broken bones in your back) that head coach Matt Patricia is not necessarily going to be forthcoming regarding injuries to players.

As things currently stand, Patricia has said that Stafford remains day-to-day and week-to-week. If you are in a pinch, you can drop the Lions signal-caller. Even if he suits up, his upcoming schedule is less than ideal. Each of his next four opponents is in the bottom half of the league in terms of fantasy points allowed to opposing quarterbacks. Jeff Driskel played well in Stafford’s stead; all things considered. The former Bengal finished the week as the QB12 in fantasy, displaying some good mobility and improvisational skills. Still, I would not recommend Driskel as a fantasy starter even if he gets the nod. He is the QB22 in my Week 11 rankings. If Stafford does manage to gut it out and play, he would likely slot in around QB15 or so.

Once again there was a lot to unpack with a few of the league’s most intriguing backfields. In Los Angeles, Melvin Gordon has picked it up after a horrific start. His weekly finishes in PPR leagues are RB40, RB34, RB20, RB24, RB3, and RB6. He has a dream Week 12 matchup against the Kansas City Chiefs. Derrick Henry repeatedly gashed Kansas City, and I would expect Gordon to get a ton of run, especially with the Chargers having a Week 12 bye. Austin Ekeler has remained relevant since Gordon’s return. He has finished as a top-30 PPR back in five of six games. I would consider Ekeler more than a Flex play this week. Both Charger running backs are inside my top 15 in PPR leagues and top 20 in standard formats.

It looks like the Cleveland Browns are looking to employ a similar backfield workload to that of the Chargers. Many fantasy owners were worried that the return of Kareem Hunt could spell doom for Nick Chubb. That was hardly the case. Chubb carried the ball 20 times for the fourth consecutive game and saw his third-highest snap count (57) of the season. Cleveland kept Hunt plenty involved as well. Hunt had just four carries but tied his career-high with seven catches on 38 snaps. The usage enabled both to finish the week as top-13 plays in PPR leagues. I want to see it for another week before trusting Hunt, but he does offer some Flex appeal on Thursday night. Chubb remains an RB1 even with a difficult Week 11 matchup against the Pittsburgh Steelers on the horizon.

Ronald Jones got the start for Tampa Bay and had a mostly productive day, but not in the way you would expect. Jones caught eight passes in the Bucs’ victory. The second-year player has long been derided for his inability to catch the football, so the receiving numbers were surprising, to say the least. Jones had just 15 grabs in his previous 17 NFL games. Still, he had a dropped pass and lost a fumble. He was also outgained by Peyton Barber on the ground, with Barber securing the victory with a late touchdown run. I still do not trust Barber, especially heading into a matchup with New Orleans and their stout rushing defense. Jones is a Flex for me against the Saints. He comes in an RB27 in my Week 11 rankings in both standard and PPR formats.

Devin Singletary was also supposed to unofficially usurp Frank Gore in Buffalo after totaling 140 yards from scrimmage the week prior. However, that did not go as planned. Singletary carried the ball just eight times while securing three receptions in Buffalo’s loss in Cleveland. The rookie did average over five yards a carry, but the volume simply was not there for whatever reason. Singletary will look to bounce back in Week 11 against the Miami Dolphins. While I still like Singletary as an RB2 this week, his floor remains rather low given his uncertain usage. Also, the matchup is not as friendly as season-long statistics would lead you to believe. Miami has won two straight and held Marlon Mack to an RB23 finish last week. Frank Gore still looms and figures to siphon goal-line work, further clouding Singletary’s outlook.

Finally, it looks like Derrius Guice will be active on Sunday in Washington to face the New York Jets. Owners should certainly scoop Guice up in the 18 percent of leagues in which he is available. However, there are too many question marks heading into Week 11. We do not know how much work he will get, and Adrian Peterson is still in the fold. Chris Thompson may also be back after missing the last three games. The Jets have been a tough team to run against, as evidenced by Saquon Barkley’s one-yard performance last week. Facing a difficult matchup and with an uncertain role and workload, Guice is just a desperation Flex play for those missing Barkley, Derrick Henry, Chris Carson, Aaron Jones, or Jamaal Williams.

Got a beef with Mick’s Week 11 Rankings? Let him hear it in the comments below!