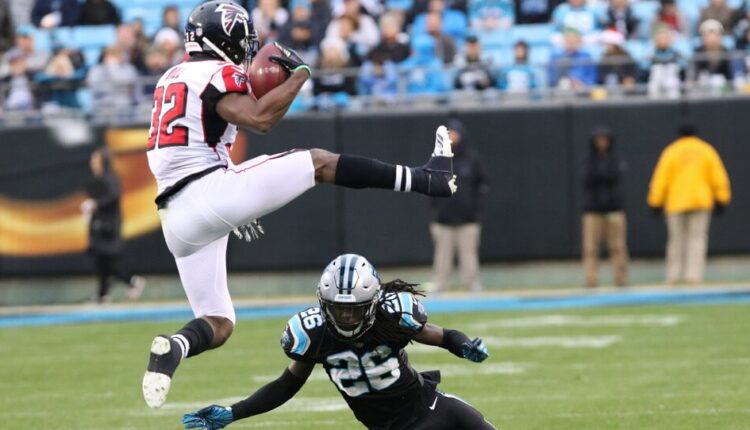 Last week’s article was a raving success. We had Damien Williams as the highlight of that piece and a season-high workload indicates that we made the right choice. We also had the Ravens D/ST in there and if you streamed them, you likely won your week! We’re back at it with more adds here, so let’s get into our Week 11 waiver wire picks!

If Devonta Freeman misses any time because of an ankle issue suffered in Week 10, Hill would easily be the biggest pickup of the week. He stepped right into that workhorse role in the absence of Freeman, collecting 20 carries for 61 yards and a TD against a stout Saints defense. Anyone getting 20 carries in a potent offense like this is definitely in consideration and Hill clearly has the ability to be the every-down back for the Falcons.

The reason we believe he’ll be the bell-cow back is that no one else received more than one carry outside of Hill in that game once Freeman went down. That’s big news with a couple of big bye weeks right around the corner, as Hill should have success against a Carolina defense that’s allowing over 133 yards per game on the ground this season.

Slayton had his best game of the season in Week 10 and it’s becoming clear that Daniel Jones trusts this kid. He finished that Week 10 loss to the Jets with 10 catches for 121 yards and two TDs. What we really like is the increase in opportunity. Evan Engram and Sterling Shepard both dealing with injuries allowed Slayton to play on nearly every snap in Week 10 and has led to four TDs over the last three games. As long as Engram and Shepard are out, Slayton’s target and snap share make him a tempting waiver wire pickup.

Juju Smith-Schuster has been one of the biggest busts in fantasy football and it’s very possible that Washington is the go-to guy in Pittsburgh right now. That was certainly the case in Week 10, with Washington leading the team with six catches for 90 yards and a TD. That marked his second-straight game with at least 69 yards, and he also has at least six targets in three of his last four games too. The simple fact is, Washington and Mason Rudolph have chemistry that JSS and Rudolph don’t, and a major part of that is because Washington and Mason played together in college.

Cook found himself in the consideration section of my article last week but this is probably the last time he’ll be available on your waiver wire. While he did get off to a terrible start, this is still a guy who was projected to be a Top-10 tight end at the beginning of the year. An injury to Drew Brees hampered that expectation and then an injury to Cook killed that notion. Now that both are back and fully healthy, it wouldn’t be surprising to see him return to that form for the final six weeks. That appeared to be the case in Week 10 when Cook collected six catches for 74 yards on 10 targets despite the Saints scoring just nine points. If you’re in need of a tight end and Cook is available, go pick him up!

With T.Y Hilton and Paris Campbell both dealing with injuries, Ebron is one of the best pickups in fantasy football. That opens up a ton of targets and that’s huge for a talented tight end like this. Ebron was actually one of the league leaders in red-zone targets last season, collecting 13 TDs in what was a breakout year. While he hasn’t been close to that production this season, we could see a big second half from Ebron.

Week 10 is a good indicator of that, with Ebron leading the team with five catches for 56 yards on 12 targets. Those 12 targets marked a season-high and it’s no surprise after he complained about his target share last week. If he continues to see a target share like this and continues to be a focal point in the red-zone, Ebron could end up being one of the most regrettable drops people had.

The Bengals are starting some quarterback named Ryan Finley and he allowed two defensive touchdowns to the Ravens in Week 10. That makes any D/ST worth starting against them and the Raiders have quietly been a solid unit this season. While they’ve been cut up through the air, their 98.4 rushing yards allowed per game is an impressive mark. That’s really the Bengals only strength right now and it’s scary that they’ll have to lean on Finley to have success against this unit. Vegas agrees with our assessment, making Oakland a projected 10.5-point favorite in this game with Cincy projected for fewer than 20 points.

Mike Gesicki (MIA): Gesicki is benefiting from injuries in Miami, picking up at least six targets in back-to-back games.

Kalen Ballage (MIA): Ballage is the only RB left in Miami, as he received a season-high 20 carries in Week 10 despite playing terribly yet again.

J.D. McKissic (DET): McKissic had six catches for the Lions in Week 10 and he looks to be the new Theo Riddick for this offense. He also played 58 snaps, which was the fifth-most of any RB in the NFL in Week 10.

O.J. Howard (TB): Howard was projected to be a Top-5 tight end at the beginning of the season and his best performance of the year in Week 10 could be a sign of things to come.

Dede Westbrook (JAX): Nick Foles has a man-crush on Westbrook and he could very well be the most targeted receiver in Jacksonville with Foles returning this week.