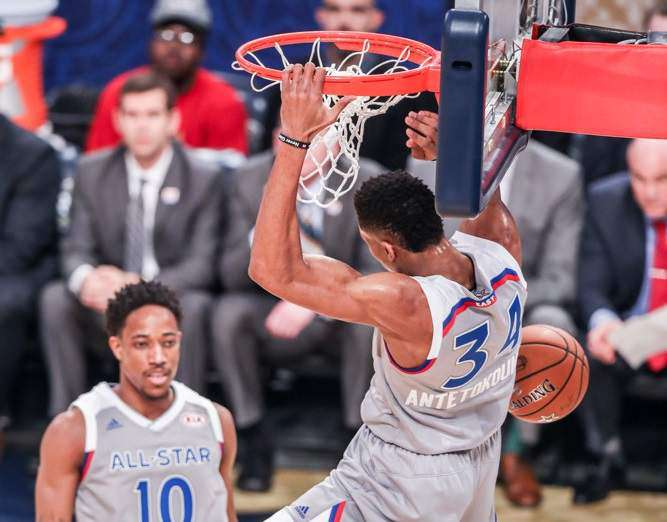 Kevin Durant and Giannis Antetokounmpo’s rankings can be swapped according to your strategy or preference. Durant should provide more threes as a better shooter. On the other hand, the Greek Freak will get you a little extra in terms of rebounds and defensive stats. That’s not to say Durant is a slouch on the defensive end. He has averaged 1.7 blocks per game during his time in the Bay area, the reason I have him atop my small forward rankings.

Kawhi Leonard burned a lot of fantasy basketball owners last year. However, reports say he’s already proving that he’s the top offensive talent in Toronto. Too much is at risk for him if he sits out yet another season, and Nick Nurse will build the Raptors offense around the Klaw.

The 4-7 range is very close for me. Ben Simmons is a unique talent that should only expand his skill set in his unofficial second season. Paul George improved as the Thunder moved away from Carmelo Anthony. Jimmy Butler is an all-around fantasy gem, but his situation in Minnesota is murky. There have been talks of him holding out until the situation is solved. If he ends up in a favorable location, he might jump to the top of this group.

Fast break finishes and outlet passes for wide open shots await the LA youngsters with LeBron James’ arrival. Brandon Ingram, Kyle Kuzma, and Josh Hart should be the primary beneficiaries, hence a bump in the rankings. Ingram and Kuzma, in particular, find a home within the top 36 among my small forward rankings.

Speaking of Kawhi, the Spurs have an open spot at small forward. With the departure of Kyle Anderson and Manu Ginobili’s retirement, the Spurs are left thin at the 3-spot. Rudy Gay could be a sneaky pickup later on in drafts. He’s in line for an expanded role and an uptick over his shockingly low 21 minutes per game last season.

Looking Ahead: Who Exactly is Jonathan Villar?