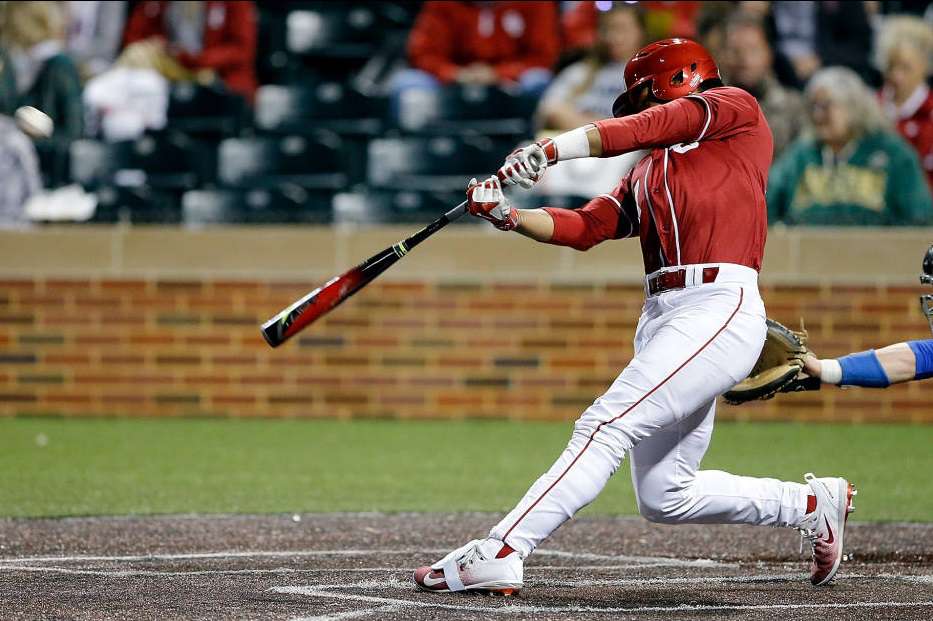 Welcome to the third and final installment of my first round 2018 MLB draft analysis. We started with pitchers a couple weeks back, infielders were the sequel, and the outfield prospects below are the finale. Good things always come in threes right? Or is that bad things come in threes?

While there aren’t as many glaring stars here as there were in the infield edition last week, there’s plenty of upside to go around, especially if players like Kyler Murray and Jordyn Adams develop and reach their potential.

Now, this is not me ranking these outfield prospects on their fantasy upside, as my mid-season prospect rankings will be out next week. This is a simple rundown of the top outfield prospects taken in the first round. So, let’s get started, shall we?

While it was deemed a slight reach by the Mets on draft day, there’s no denying that Jarred Kelenic has the offensive potential to be a future star in the Major Leagues. First off, I love this kid’s swing. Kelenic’s swing is compact, quick to the ball, and generates hard contact to all fields.

Wasn’t that fun to watch? Kelenic keeps his weight back and creates plenty of controlled torque on his swing with a strong lower half. His hands coil back and explode through the zone in a concise swing path. It might not be a Ken Griffey Jr swing, but it’s a damn fine swing for an 18-year-old prep outfielder. Kelenic should have no problems posting high batting averages as a professional.

Kelenic also has some power and speed to go along with that plus hit tool. That 6’1, 195-pound frame packs plenty of power potential that is beginning to scratch at the surface. If Kelenic continues to add loft to his swing, 20-25+ HR seasons will likely be in his future. The wheels are also above-average with close to 30 SB upside. Put it all together and you have an offensive star just waiting to happen.

One of the most intriguing outfield prospects in this first round without a doubt is Kyler Murray. First off, the man is No. 1 on the Oklahoma Sooners depth chart… at Quarterback. Yes, that’s the football position and not some new weird baseball position that Joe Maddon thought of while in a drunken stupor. This shows two things. First, that Murray is incredibly athletic. His elite speed is going to give minor league pitchers nightmares in the very near future with the potential for 40-plus steals per season down the line.

The second thing him playing Quarterback shows is that Murray is still very raw as a prospect and also a substantial risk as a top-10 selection. He hasn’t been able to solely focus on his craft, and while he has serious potential at the plate, he’s got a long ways to go to realize that potential. Also, the risk of Murray seriously injuring himself this fall playing football has to be on the mind of the Athletics front office.

Murray is a great player to have on your dynasty roster and has the upside to become one of the best outfielders, if not the best, from this draft class. I just wouldn’t use a top-10 FYPD pick to acquire his services, due to all the risk and uncertainty that surrounds him.

With a last name like Swaggerty, you better be pretty damn good at something. This particular Swaggerty is pretty damn good at a lot of things, starting with is plus speed. Although he only swiped nine bags after 19 the previous season, only Murray, Jordyn Adams, and maybe Connor Scott can for certain be ranked ahead of him as speed threats among these outfield prospects. He currently receives mostly 60-grades for his speed, but after watching him play, I think there’s 70-grade potential there if he continues to develop as a base stealer.

Unfortunately, the power is not as promising. Swaggerty has a swing built for line drives and likely won’t generate more than 15-20 or so homers annually without a swing adjustment to add some loft. He also has a tendency to shift his weight too early to his front foot which suppresses his power potential.

Tall and lanky with a ton of speed and below-average power potential. If you wanted the cliff notes version of Connor Scott, there it is. Sure, he can swat em out in BP, but his in-game power has yet to show up consistently. If he can fill out that 6’4″ frame of his and add some loft, there’s a chance he turns into an above-average power threat.

Now, enough about his power. Scott’s speed is what makes him one of the top outfield prospects in dynasty leagues. For a taller player, Scott sure can move. That speed, along with a plus left-handed hit tool, should have him in the .280/30 ballpark most seasons. If Scott’s power continues to develop, watch out.

Alright, I guess we’ll stick with this speed theme we got going on. The 2018 MLB Draft seems to be full of speedy outfield prospects.

Jordyn Adams can flat-out fly. And you know what, he can hit a little bit, too. Imagine if Billy Hamilton actually had an offensive game. Scary thought, isn’t it? Adam wreaks havoc on the basepaths whenever he gets on and is locked in the 3.7 range down to first base from the right-hand batter’s box. There’s legit 40 SB upside here, which by itself makes Adams a very intriguing dynasty prospect.

As majestic as it is, let’s move past his speed. Murray has as about as much upside as any of the outfield prospects listed, but is still very raw. There are a lot of moving parts to his swing. A pre-pitch bat wiggle, high leg kick, hand shift, blah, blah, blah. You get the idea. All of that will need to be refined into a simpler swing if he wants to put his top of the order upside to good use. Currently more of a line drive hitter, Adams should grow into more power as he matures physically. The ceiling here is a right-handed Carl Crawford, so keep a close eye on him as he progresses through the Angels system.

While his middle infield Beaver teammates have more of a contact oriented approach, Larnach brought the thunder to the Oregon State lineup. Larnach didn’t show much power during his first two collegiate seasons, but broke out in a big way this spring. In 225 at-bats, Larnach slashed .342/.468/.658/1.126 with 15 doubles, 18 home runs, and nearly as many walks (48) as strikeouts (55). His advanced approach at the plate and pitch selection are well beyond his years and will likely continue to yield high on-base percentages throughout his career.

Larnach’s power can be an asset for him as well. He uses his quick wrists to get the barrel of the bat through the zone and a slight uppercut swing to generate loft and power to all fields, with his pull power easily grading as plus. That combination of power and approach will plop him in the middle of the Twins order within the next few seasons.

If you looked up “bat-only” in the dictionary, you’d find a picture of Seth Beer. He has absolutely no speed, can’t play defense, and his arm stinks from both first base and the outfield. If his bat doesn’t make plenty of noise, he’s going to have a long career riding buses in the minor leagues.

Luckily for us, Beer has the bat capable of making that necessary noise. Beer has easy plus power, and while most of that is to his pull side, he can muscle pitches the opposite way, as evident by his first career professional home run a few days ago. Outside of that, there are just more questions to be answered. Beer struggled with wooden bats and doesn’t have the most fluid swing around. He gets by with his solid approach and plus-power but his long swing could get him in trouble as he begins to face more advanced pitching.

The Rays really nailed the first round of the 2018 MLB Draft. After drafting two high-upside southpaws in Matthew Libatore and Shane McClanahan, they selected toolsy high school outfielder Nick Schnell with their second pick in the competitive balance round.

Schnell doesn’t have one elite tool, but does a lot of things very well. Schnell profiles as a hitter that will hit leadoff or No. 2 in the batting order. He has a clean swing with a modest leg lick and hand coil that shifts to plus bat speed. His swing is more geared for line drives into the gap, but 20 home runs annually are attainable with some added loft. With all that being said, speed is the most noteworthy tool for Schell with 30-plus SB upside.

Jake McCarthy has leadoff hitter written on his forehead with permanent marker. Power will likely never be a big part of his game, but speed and on-base skills damn sure will. McCarthy finished his collegiate career with a .423 OBP and 36 steals in 338 at-bats. That’s a small sample size for sure, but just shows what McCarthy is capable of as a future leadoff hitter. His clean, line drive oriented swing will likely generate solid batting averages, but since he doesn’t use his lower half much in his swing, he’ll likely be capped in the 10-15 HR range.

Okay, I cheated a little here, but it’s certainly warranted. Parker Meadows was technically the first pick of the second round, but I’m including him since he’s Austin’s little brother and has a ton of fantasy upside.

Here are some BP hacks from @PGAllAmerican Parker Meadows. Stock trending up and one of the more toolsed-up prospects in the class. #mlbdraft pic.twitter.com/ZdzDo6Nf8f

The younger Meadows brother is a different hitter from his big bro. While Austin’s swing is geared more for line drives and a higher batting average, Parker’s is more of a power approach while sacrificing a little average along the way. The speed is plus just like his brother and could eclipse 30 steals on a regular basis. Best case scenario here is a Kyle Tucker kind of prospect if he continues to mature as a hitter.

Thank you for reading another edition of Dynasty Dugout here on Fantrax.  Got a question about the 2018 MLB Draft I didn’t cover here? Ask below or follow me on Twitter and ask there.