Outliers: High-BABIP Hitters Who are Built To Last

Over the last several years, BABIP has come to be accepted as a useful metric for fantasy owners. Extreme rates — those well above or below a normal mark of around .300 — can be a signal of impending regression. They can also indicate hitters who happen to be remarkably good (or bad) at getting hits on balls in play. Today we’re going to look at high-babip hitters and see why they get the results they do.

There are several ways that players can become high-BABIP hitters, year in and year out. They can hit line drives, which become hits more than two-thirds of the time. They can eschew popups, which are virtually automatic outs, or flyballs in general. Hitting to all fields enhances one’s BABIP, as does legging out infield hits. Old-fashioned hard contact doesn’t hurt either.

Matt Kemp is just shy of a .400 BABIP this season, and while he is due for some decline from his overall .338 batting average, he has a long history of high BABIP rates to reassure us. Addison Russell’s .355 BABIP and .277 overall batting average are creating the appearance of a mild breakout, but that BABIP is out of line with his career .304 rate and his .291 xBABIP for this season.

The following five high-BABIP hitters have much more in common with Kemp than Russell, even if their resumes of superb hitting on balls in play are not as well established as the Dodger outfielder’s. All have season-to-date BABIPs above .360. Some are widely available, perhaps because fantasy owners have been skeptical of their BABIP-boosted stats. Others are more popular among owners but are worth keeping on your radar if you somehow get a chance to acquire them.

Note: All current season stats are for games played through Sunday, June 17.

If you take a gander at Alfaro’s .241/.286/.385 slash line and No. 29 ranking among catchers in Roto value (per ESPN’s Player Rater), there doesn’t seem to be much to recommend using him in fantasy. If you dig deeper, there looks to be even less to like. Alfaro has swung at 46.5 percent of the pitches he has seen outside of the strike zone and swung and missed at nearly one out of every four pitches.

In that context, Alfaro’s .241 batting average looks like it could only be the result of a miracle. He is batting .385 on balls in play, which has blunted the impact of a 39.5 percent strikeout rate. Of hitters with at least 150 plate appearances, only Austin Jackson, Kemp, and Scooter Gennett have a higher BABIP. Yet, when you realize that Alfaro had a .420 BABIP when he came up for the last two months of last season, it raises the possibility that there just might be something to his ability to get hits on balls in play at a much higher rate than the typical major leaguer.

Aside from getting infield hits, Alfaro does just about everything a hitter would need to do to hit well on balls in play.

Both this season and last, Alfaro has rarely popped out or made weak contact, and his career pull rate of 29.5 percent is more than 10 percentage points below the major league average. So far this year, Alfaro is hitting line drives at a hearty 25.7 percent rate, and on liners and flyballs, he is generating an average exit velocity of 93.2 mph. The latter mark is actually 1.5 mph lower than last season’s mark, and he also struck out at a more respectable 28.9 percent rate last summer.

If Alfaro can make more consistent contact and hit with a bit more power — just like he did in his first season — he should rocket up the catcher rankings, and at worst, be a viable No. 2 fantasy catcher.

Whereas Alfaro entered this season with a track record (though limited) of good hitting on balls in play, Crawford embarked upon 2018 with a career .297 BABIP, which is as ordinary as ordinary can be. So what gives with his current .374 BABIP? What has turned him into one of baseball’s most extreme high-BABIP hitters?

He has made two important changes from previous seasons. Prior to this year, Crawford had never posted a line drive rate as high as 23 percent, but so far this season, he’s coasting with a 27.7 percent rate. Crawford has also gone from being fairly neutral in terms of his pull tendencies to decisively being an opposite-field hitter. If the drop in his pull rate from 38.9 percent in 2017 to 28.4 percent in 2018 doesn’t tell the story, these spray charts from FanGraphs will. 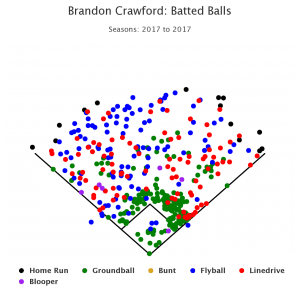 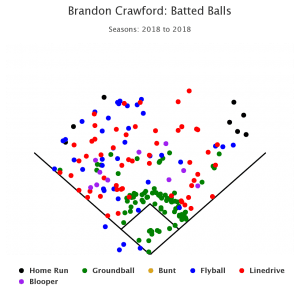 The left-handed-hitting Crawford’s power numbers haven’t suffered as a result of all of those opposite-field flyballs and line drives, but his BABIP on those batted balls has risen from .351 a year ago to .471 this year.

It’s not a given that Crawford will carry his line drive and opposite field tendencies over to the remainder of the season, but as long as he does, he has a legitimate chance to be a .300 hitter the rest of the way. Chances are slim that you can pick Crawford up on waivers, but maybe you can get him at a reasonable price in a trade with a skeptical owner.

In the latter part of May, Hernandez started to hit well enough to earn regular playing time. While he has not kept pace with his scorching May performance — a .325 batting average with five home runs — he has continued to start almost every game.

A spike in his groundball rate has sapped Hernandez’s power (.065 Iso in June), and a surge in strikeouts has limited his batting average to .239 this month. Even with the slump, Hernandez has been batting .345 on balls in play in June, and over the last 30 days, Hernandez has the 31st-highest Roto value of any outfielder.

Hernandez’s flyball and strikeout rates may bounce up and down, but he has posted a BABIP of at least .345 in each month of this season and in three of the final four months of last season. For this season to date, his BABIP stands at .374.

In 2018, Hernandez has done a superb job of avoiding weak contact. According to xStats.org, the major league rate of Poorly Hit balls (those that are typically automatic outs) is 22.7 percent, and Hernandez’s rate is roughly half that at 11.4 percent. He has also collected 10 infield singles in 184 plate appearances, which is a higher rate than Ender Inciarte or Trea Turner has.

We probably can’t count on Hernandez to rebound as a power hitter (though we can’t count it out, either), but given his history of decent K-rates, his current strikeout binge (17 of them in 55 June plate appearances) should come to an end soon. Hernandez has hit .290 overall and .377 on balls in play over 416 plate appearances going back to last June, so he could help fantasy owners with batting average and runs over the remainder of the season.

Duffy is not quite as available as Hernandez is, but his appeal to owners who need help with batting average and runs is even greater, and he is still unowned in many leagues. His current .379 BABIP is partially the product of a 26.5 percent line drive rate and a 33.1 percent hard contact rate. Both marks are out of line with his career norms, but whatever regression Duffy encounters won’t likely be dramatic. He has a career .331 BABIP that is weighed down by his numbers from an injury-plagued 2016 season, and after having missed all of 2017 while recovering from surgery on his Achilles, he appears to be in prime form again.

The former Giant consistently hits to all fields and seldom hits popups, which is the formula for most high-BABIP hitters, yet he doesn’t rely on his BABIP to cover up an unsightly strikeout rate. Duffy has struck out in 18.0 percent of his plate appearances, and that’s a slightly elevated rate for him. It’s utterly realistic to expect him to bat at least .280 over the rest of the season, and now that he is entrenched as the Rays’ leadoff hitter, Duffy should be a prolific run-scorer.

Matt Duffy has 25 hits in the last 18 games for the @RaysBaseball. ? ? #RaysUp #MLB pic.twitter.com/iatrEpxUiI

Anderson’s .368 BABIP is largely backed up by a .350 xBABIP, but he is the biggest enigma on this short list. His profile features several of the elements of similar high-BABIP hitters, but Anderson is not extreme in any of these facets. His Poorly Hit rate of 17.6 percent is lower than average, but not dramatically so. His 28.2 percent flyball rate is the 18th-lowest among qualified hitters, but he is nowhere close to Duffy (21.5 percent) in this regard.

Anderson hits with some force, and particularly when he is not launching the ball. Of the 162 batters who have put at least 150 balls in play, Anderson’s average exit velocity on ground balls of 89.1 mph is the 21st-highest. That may have contributed to Anderson’s .278 batting average on grounders, but that accomplishment pales in comparison to Yulieski Gurriel’s .330 average on grounders — and the 91.6 mph average exit velocity behind it.

While Anderson does not have a single standout skill that explains his high BABIP, the fact that he generally fits the profile of other reliable high-BABIP hitters makes his season-to-date performance trustworthy. Anderson’s ability to hit for average (.299 overall), get on base (.378 OBP) and score runs (40 in 307 plate appearances) has helped to make him the 11th-ranked third baseman in Roto value.

If there is a reason to sell high on Anderson, it’s because he has batted .406 with runners in scoring position. That will be difficult for him to sustain and owners should expect him to slow his season-to-date pace of 34 RBI in 72 games.