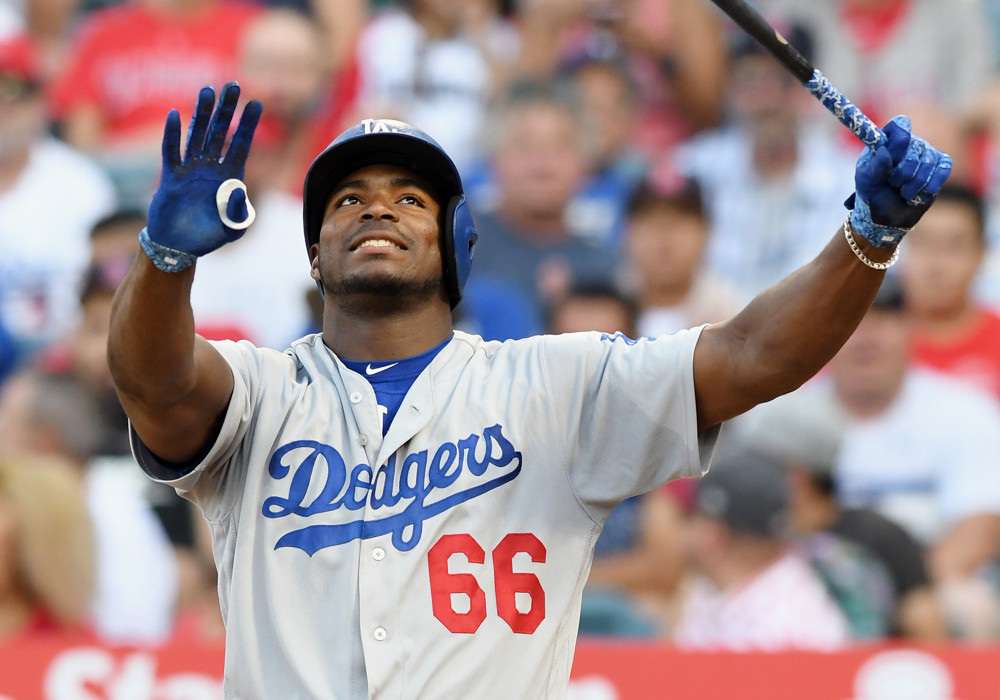 Getting all the latest news on MLB injuries is important. It can help you manage your roster and minimize the damage injuries do to your fantasy baseball teams. Dr. Mike Tanner helps you take it one step further and find ways to take advantage of various MLB injuries and find a little value in their wake.

The right oblique on a right-handed hitter serves as the “brakes” during the follow-through swing. It is tugged on and stretched with each follow through. The good news is this tends to affect power less than a left oblique strain, but it is more likely to suffer a second injury. It also may take a little bit more time to heal up. Couple that with the Machado rumors (pushing Taylor back into the outfield) and the Dodges may choose to be very conservative with Puig. He should be ready in early August barring any setbacks. Expected Return: early to mid-August

Keep your team on track heading into the second half.  Listen to Van Lee, Jeff Zimmerman and Rob Silver on the Launch Angle Podcast.

Gary Sanchez is on track to return after the All-Star Break or at least within a week or so.

Yoenis Cespedes has finally resumed baseball activities. I expected him back weeks ago, so clearly, he has suffered multiple setbacks. If you drafted, hopefully, you knew you weren’t buying 500 plate appearances.

Carlos Correa took grounders from a stationary position, which is more limited than I would expect at this point. It is possible that he is out several weeks after the All-Star Break. Look for an early August return.

Josh Donaldson also resumed baseball activities, but he’s still a week or two out from a rehab appearance. The Jays are tightlipped about his setbacks and a trade is looking less likely all the time.

Garrett Richards is facing a tough decision. The fact that conservative treatment is being offered indicates a partial tear. He tried the PRP injection last time, but it may be time to fix the problem surgically, meaning a lost 2019 entirely. This is likely the same fate Ohtani may be dealt and I expect both to return in 2020.

Joakim Soria likely won’t be wearing a White Sox uniform in August, which is when Jones may become relevant again. He is an excellent target now if you are needing a sneaky source of saves down the stretch. Expected Return early August

Joe Jimenez, the closer in waiting, is 1 for 2 in save changes in Greene’s absence. With nothing to play for in the second half, don’t be surprised if Greene resumes the closer role if he isn’t traded. No reason to increase Jimenez’ leverage in his arbitration years now. Expected Return: Post-Allstar break

Roberto Osuna is eligible to return on August 5, but his legal case is far from settled. Oh and Clippard have been reliable, but not spectacular in his absence. Tepera is not guaranteed to resume his role as a closer, but another option for deeper roto leagues if you are desperate to make up ground in this category. Expected Return: Late July

Compression on a nerve in his foot will keep him out of the All-Star Game and likely a week or two afterward. MLB injuries like this aren’t usually long-term issues, and Doolittle remains a Top-10 closer. Expected Return: Late July

The cautious Indians are finally letting Miller let it go in bullpens, and the results are promising. A rehab assignment in the upcoming week should wrap up his rehab. Expected Return: Late July

Pin removal signals the fracture in his hand is now stable. He’ll be ready to roll when he is eligible to come off the 60-day DL. He role is up in the air, but he was excellent when given a chance to close. Expected Return August 19

Obviously, you are a Fantasy Baseball diehard. There’s still time to relive draft day all over again? Head on over to Fantrax where you can draft a team 364 days a year.