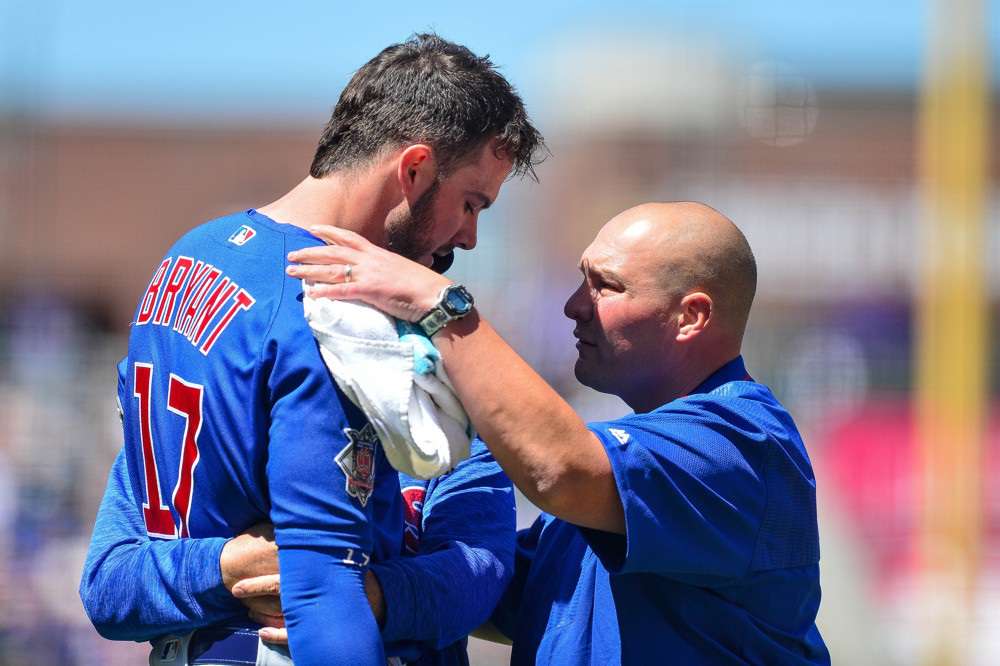 Why Yoenis Cespedes may miss all of 2019. It may be time to trade Kris Bryant in redraft leagues. A Dodger and Brave are returning to health just in time for your playoff or rankings push and two aces who may be in big trouble. Dr. Mike digs into the MLB injuries that hurting fantasy baseball owners.

They call it “Calcific Achilles Tendonosis” and it is a very, very bad thing. In English, it means that the area where the Achilles tendon attaches to the heel bone builds up excessive bone, and some of the tendon may actually turn into to bone as well. The body is very good at adapting and when there is too much friction it builds calluses and at times bones. You’ve likely heard of a bone spur, they are formed this way—too much resistance, the body fights back.

Cespedes has the problem in both heels. If you had any doubt the Mets were cursed, let’s just put that argument to bed now. He’ll have surgery on both heels, but only one at a time. The doctors told him he’d need 8-10 months to return, but keep in mind that the second surgery won’t happen until late October or November, so that’s when the rehab clock will actually start. 10 months from early November is early September, so Cespedes missing most or all of the 2019 season is on the table. I cut him today in a 12-team keeper league that allows each team to retain 10 players.

Injuries due to excessive stress/bone formation often have setbacks and require the player to manage the problem by having frequent days off. Similar to Daniel Murphy (who has started only 2/3 of the Nats games), even if he returns it would be tough for him to resume full-time work, or at least it would be unwise. Expected Return 2020 – why bring him back late in 2019, unless you think the Mets will be in the hunt?

The shoulder problem that is haunting the Cubs star third baseman is not going away. The club has never indicated more than “shoulder inflammation,” but if you are in a redraft league with a trade deadline approaching, it may not be a bad idea to trade him for name value before the ax drops. Two and half weeks wasn’t enough ‘rest’ to fix the problem, and it wouldn’t surprise me if this time around there were a lengthier absence.

Kris Bryant’s nagging shoulder issues could be a blow to the #Cubs‘ postseason aspirations. https://t.co/EstCLYfxEa

Nomar Mazara – progressed to hitting off a tee and should be a week to 10 days away from a return to the lineup.

Carlos Correa – Conservative doesn’t quite capture how careful the Astros have been with Correa thus far. He recently just hit off a tee and may be more than a week away. On a positive note, there has been no mention of setbacks.

Hyun-Jin Ryu – It’s safe to add Ryu in most 12 to 15-team formats if you need pitching help down the stretch. He’s about two weeks out from rejoining the crowded Dodgers rotation.

Max Fried – Although it was Double-A, Fried destroyed the competition for 10 Ks over 6.2 innings pitched. He’s worth a look in deeper leagues.

Michael Soroka – The Braves are playing it safe with their 20-year-old, and he may still be two months out, and likely not having a meaningful impact for fantasy in 2018

Black Snell – No real information released yet, but the word pitcher and shoulder in the same sentence can lead to bad things (Insert Jeff Samardzija picture here)

Corey Kluber — The knee clearly isn’t right, don’t be surprised if Kluber misses his next start or lands on the DL to give him time to heal up.