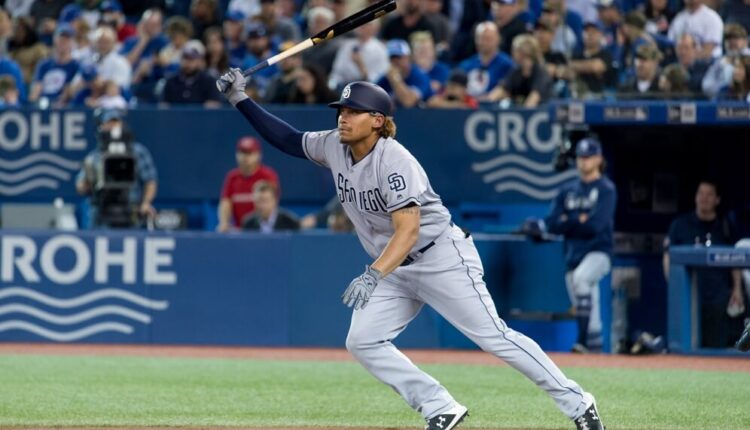 How many drafts are too many drafts? Because I’ve been doing it since Christmas, and I don’t want to stop. As one ends, I find myself in the lobby, and another begins. Lucky for me and my wallet, it’s the deep, 50-round draft-and-holds and best balls that have my attention at this point in fantasy baseball draft season. The deeper the draft, the deeper I get into the player pool. If deep leagues are your cup of tea as well, I’ve got something for you here in these late-round outfield fliers.

All offseason, I’ve been digging deep for late-round starting pitchers, potential closers, and middle-infield fliers. Now, we take things to the outfield. In these deeper leagues, finding outfield depth late in the draft can be tricky. Whether it’s playing time or upside you’re looking for, I’ve got four outfielders to consider taking a flier on.

Robbie Grossman went into the 2020 season with a changed approach at the plate, and it paid off. Grossman had a mini-breakout of sorts, hitting eight home runs, stealing eight bases, and slashed .241/.344/.482 for the Oakland A’s. The most drastic change for Grossman came in his batted ball profile. He pulled the ball more than ever at 47.7%. Take a look at his spray chat and see how that worked out for Grossman. 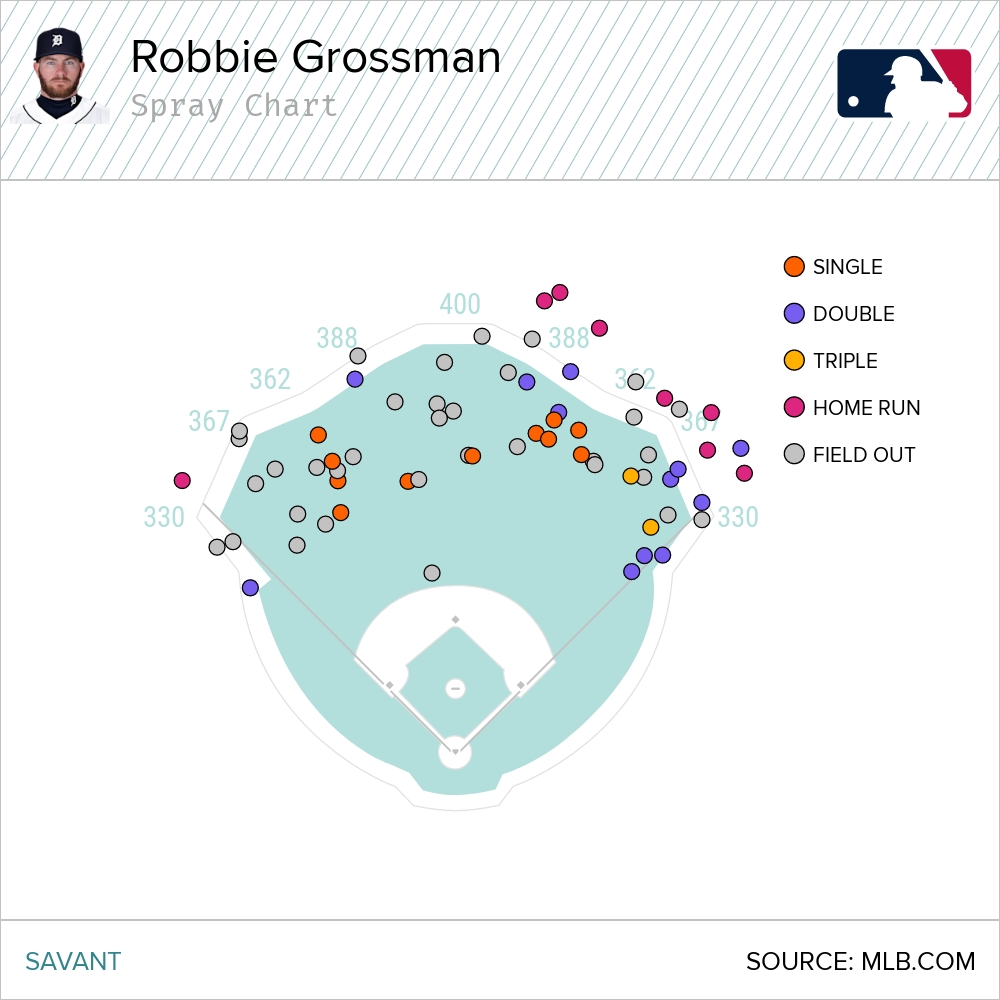 The other change that stood out for Grossman was his overall aggressiveness at the plate. He’s historically been an extremely patient hitter, sometimes to his detriment. His career swing percentage sits at 38.7%, well below the league average. While the patient approach has led to high walk rates, you can’t put the ball in play when you don’t swing the bat. In 2020, Grossman had a 43.4% swing rate, by far his career-high and more in line with the MLB average. Though he still had an excellent 10.9% walk rate.

After signing with Detroit, Grossman should have the opportunity to play every day and hit near the top of the lineup. Roster Resource currently projects Grossman to hit second in the lineup. If he can carry over his approach to 2021, we could get double-digit home runs and steals. I wouldn’t expect a helpful batting average, as pulling the ball half the time will cause teams to employ the shift, suppressing BABIP. And indeed, Grossman was shifted on more, and his .267 BABIP was his lowest since 2015. But this late in the draft, playing time and the potential for double-digit home runs and steals is well worth taking a flier on as a sixth or seventh outfielder in deeper leagues.

Is it time for the Braves’ top prospect to take over center field duties in Atlanta? It could very well be. Cristian Pache was thrust into the spotlight in the 2020 playoffs after an injury to Adam Duvall. He went 4-for-22 with a double and a home run. Let’s take a look at the rookie’s first MLB home run.

Touted for his defense, Pache has some work to do with his bat, namely his batted ball profile. He’s typically been very ground ball heavy in the minors. But he did give us a preview of what he’s capable of in his 2019 season at Double-A. Pache dropped his ground ball rate to 39% and hit 11 home runs in 104 games. And with a 94th percentile sprint speed, there’s no doubt he can steal some bases.

Even hitting ninth in the order, Pache could produce similar numbers to the previously mentioned Robby Grossman, though in a much better lineup. Much like Grossman, Pache pulls the ball to get to his power, as we saw in the video above. Double-digit home runs and steals could be in the cards for this rookie. In a draft-and-hold type league, he’s worth the flier for outfield depth with upside.

Outfielder Josh Naylor was traded to Cleveland in the deal that landed Mike Clevenger in San Diego. With a crowded outfield in San Diego, Naylor had little opportunity to be an everyday player. In Cleveland, the team is going into 2021 with Naylor, Oscar Mercado, and Daniel Johnson in the outfield. They’re really going to need someone to step up and produce, to say the lease. That very well could be Naylor.

In 383 career plate appearances, Naylor has hit nine home runs, stolen two bases, and hit .249. There’s some good and some bad to take away from Naylor’s small sample in the big leagues. Starting with the good, he’s been graded out with plus raw power, and it’s shown with a 115.1 max exit velocity and 93mph average exit velocity on line drives and fly balls. Second, Naylor has been able to make plenty of contact with an excellent 90.4% zone contact rate and 8.5% swinging-strike rate. So, he doesn’t strike out, puts the bat on the ball, and has plenty of raw power. What’s the problem?

Not many hitters would benefit more from a launch angle change than Josh Naylor. Having raw power is nice and all, but it doesn’t mean anything if it doesn’t translate in games. And that can’t happen with a 53.1% ground ball rate. He might just get every opportunity to work that out in Cleveland. The tools are there for Naylor. Could he make the change necessary to put it all together? It might be worth the flier to roster this potential breakout.

Speaking of former Padres, Edward Olivares was initially signed out of Venezuela by the Toronto Blue Jays. He spent the last two seasons in the San Diego farm system before being traded to Kansas City in a deal for Trevor Rosenthal. Like Naylor, a change of scenery might present an opportunity to play that Olivares didn’t have in San Diego. He might be the deepest of these outfield fliers.;

While he doesn’t have a particular standout tool, Olivares does just about everything well across the board. In 2019, he hit 18 home runs and stole 35 bases while hitting .283 in Double-A. Making his debut in 2020, Olivares hit three home runs with a .240 average in only 101 plate appearances. While he did strike out 24.8% of the time, strikeouts hadn’t previously been a big issue, consistently posting sub-20% strikeout rates in the minors. And his contact profile shows league-average numbers in zone contact and swinging-strike rates at 84.5% and 11.4%, respectively. His best tool might actually be his speed, as his sprint speed was in the 95th percentile in MLB last season. I see a foundation here for a solid big-leaguer with many paths to contribute to our fantasy teams if given the opportunity. I know I’m taking a flier on this outfielder in all draft-and-hold type leagues.

You buying into these outfield fliers? For more great rankings, strategy, and analysis check out the 2021 FantraxHQ Fantasy Baseball Draft Kit. We’ll be adding more content from now right up until Opening Day!