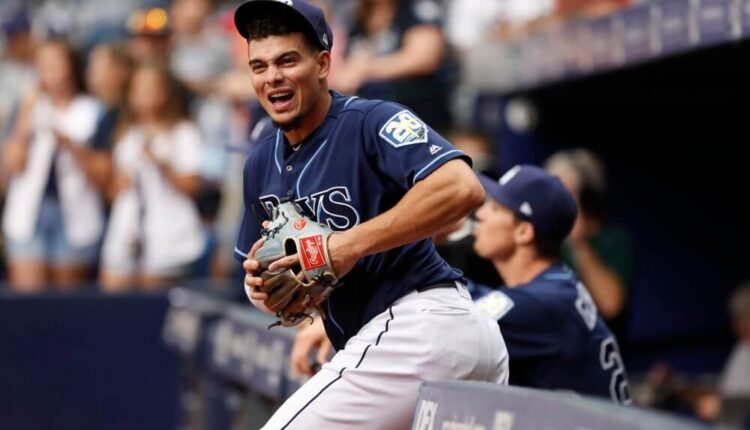 After diving into the late-round pitching market with some intriguing starting pitchers and potential closers, it’s time to take a look at some hitters. Whether you need a high-upside play or a solid all-around contributor, I’ve got five late-round middle infield fliers that could pay off big in 2021.

Going into 2020, Amed Rosario was touted by many in the industry, myself included, as a breakout candidate. A 2019 season in which he posted a .287 batting average with 15 home runs and 19 steals had him going as a top-150 pick. While Rosario didn’t quite live up to expectations in 2020, hitting only .252 with four home runs, it’s only 147 plate appearances separating him from that stellar 2019. Leading up to the season, he had been improving year-over-year since his debut in 2017. Take a look at the way things were trending for the talented young middle infielder. 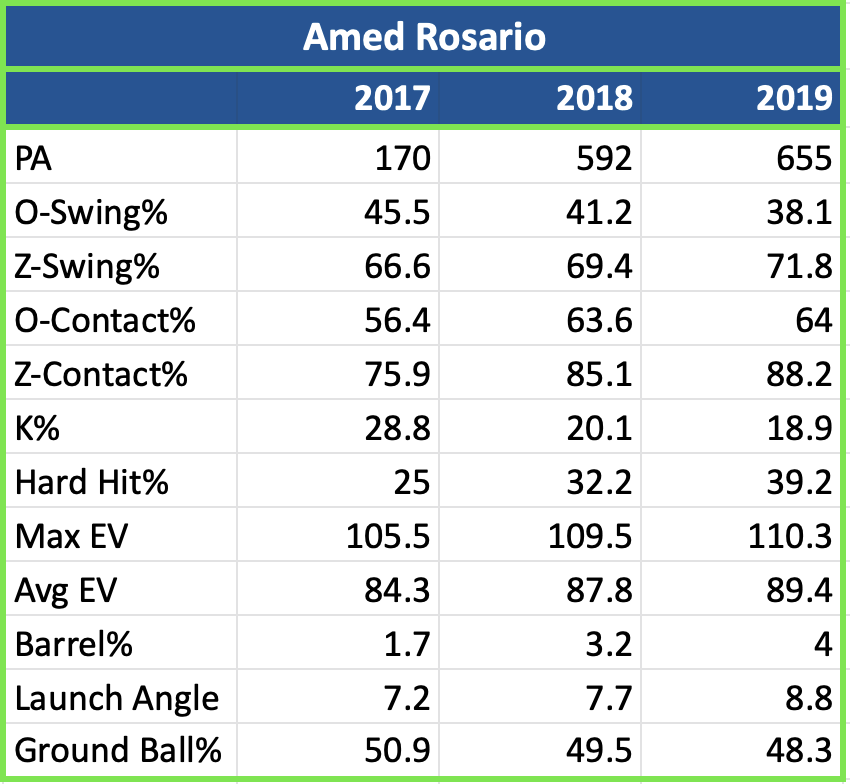 Seeing improvements across the board like that is pretty damn impressive. It’s easy to forget that Rosario was once considered one of the game’s top prospects. Recency bias and a crowded New York Mets team had driven Rosario’s cost down into the 300’s. Now, he finds himself in Cleveland with an opportunity to likely claim the everyday shortstop role. Given the shortcomings of his new lineup, Rosario could get the wheels going on the basepaths again. That team will have to manufacture runs somehow, and I see little reason to hold Rosario back despite a less than ideal success rate so far in his career. You’re looking at around 15 home runs, 15 steals, and a good batting average from the middle infield. And there’s 20/20 upside here. Take advantage of the price before it’s too late.

Speaking of former top prospects, Willy Adames was another sleeper going into 2020. Things went much better for him than they did for Rosario, Adames hit .259 and continued his power growth with eight home runs and stole two bases over 205 plate appearances. The power trend starts from his 2018 debut. Take a look at some of the improvements he’s made over the last few seasons. 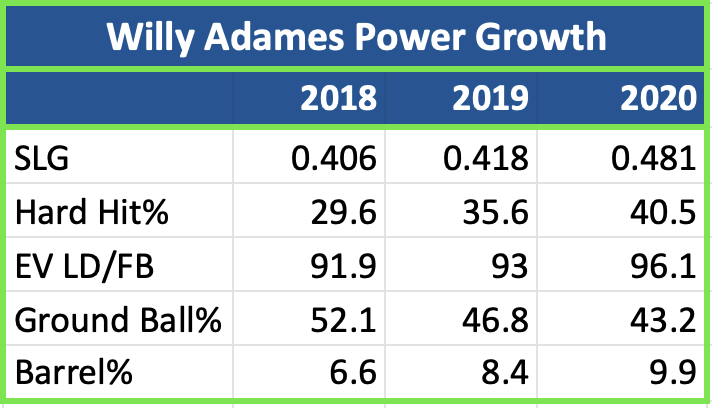 Though the power has been on the rise, it came at the expense of some contact in 2020. While Adames did have a better batting average in 2020 than he did in 2019, it came in a much different way. After achieving a league-average zone-contact rate of 84.5% in 2019, that fell to 73.2% in 2020, leading to a bloated strikeout rate of 36.1%. The average seems to have been carried by a .388 babip. Not the mention a 55% pull rate. These factors together brought on a .229 xBA. When you have a 96mph average exit velocity on line drives and fly balls, streaks like this can happen. You can get away with whiffing a lot over a short time, but regression comes, as shown by his .238 average in the second half of the short season.

If Adames can raise that contact rate once again and hold on to some of the power gains, it would go a long way to a possible breakout season. There plenty of talent there, and a 25 home run season seems in reach. Throw in a handful of steals, and we could be looking at a Javy Baez-light here to fill a middle infield position. Worth a flier at his current cost.

Mauricio Dubon debuted with the Giants in 2019 after being acquired at the trade deadline. He posted a .274 average with four home runs and three steals in 111 plate appearances. In 2020, he pretty much did the same, repeating the .274 average and four home runs while he stole two bases. Dubon just does a little bit of everything. In fact, he’s so versatile, the Giants asked him to be their primary center fielder after playing only five games in the outfield throughout his minor league career. He logged 44 games in the outfield and eight at both shortstop and second base, giving him valuable multi-position eligibility.

While Dubon won’t ever be a 20/20 candidate, he made some changes last season to project out some respectable power numbers. A swing change drove up his average launch angle, decreasing his ground ball rate from 47.7% to 33.6%. His xSLG rose almost .050 points from .358 to .403, with his hard hit% rising from 19.8% to 30.6%. Mike Kurland pointed out these changes here.

Now, these aren’t spectacular numbers by any means, but Dubon can hit just enough to contribute across the board. His line-drive rate remained consistent at about 26%. Combined with a 75th percentile sprint speed, it’s a recipe for a solid average. While Dubon might not project as an everyday player in the long-term, the Giants aren’t in a hurry to rush their top prospects up. So, he should have an opportunity to play every day this season. With multi-positional eligibility, Dubon could be a valuable reserve player on your roster that won’t hurt you anywhere, perhaps even a decent fifth outfielder. The upside here is 15 home runs, 12 steals, and a .275 average. Not a bad flier worth taking late in drafts.

The Washington Nationals lineup is looking a little stronger these days with the acquisitions of Josh Bell and Kyle Schwarber. But don’t forget about second baseman Starlin Castro. Castro hardly had time to get acclimated with his new team before suffering a broken wrist on August 14. Before that, he had hit .267 with two home runs in 63 plate appearances. What’s encouraging is the average launch angle of 16.8 degrees over that small sample. Granted, it was 63 plate appearances, but ground balls have long plagued Starlin Castro as he typically averaged about 50%. Though, the jump in launch angle didn’t come out of nowhere.

Over the last four seasons, Castro has raised his launch angle every year and slightly dropped his ground ball rate as a result. This went a long way in his successful 2019, in which he hit a career-high 22 home runs with a .270 average. With strong contact rates, Castro has always been able to hit for average. So, it’s nice to see him tapping into that power of late. If Castro could pick up where he left off in 2019 after the injury cut his 2020 short, he could be a steal in drafts. He currently projected to hit fifth in the order, behind Trea Turner, Juan Soto, Josh Bell, and Kyle Schwarber. There will be RBI opportunities galore. There’s possible .275, 25 HR, 90 RBI upside if Castro can play every day. The wrist injury was a fluke, and he has a history of high plate appearances. Many may think Castro is what he is, but the potential counting stats give him an upside that my other middle infield fliers just don’t have.

The Cubs drafted Nico Hoerner in the first round in 2018 out of Stanford. Known for having a polished bat, Hoerner quickly made his MLB debut the following year, hitting .282 with three home runs over 20 games. He wasn’t able to pick up where he left off, hitting only .222 with no home runs and three steals last season. Though there’s plenty to like here with Hoerner, mainly his contact skills.

Through 208 MLB plate appearances, Hoerner owns a 93% zone contact rate. For reference, the MLB average is about 84%. With good contact skills, a 16.8% strikeout rate so far in at the MLB level, and a 93rd percentile sprint speed, Hoerner seems like a likely batting average contributor. He also posted a respectable 93.5mph average exit velocity on line drives and fly balls last season, so there’s some power potential. The problem? An average launch angle of 0.8 led to a ground ball rate of 55.3%. Yikes. If Hoerner can learn to lift the ball more, he could reach double-digit home runs, provide batting average, and chip in some steals. With the Cubs looking like sellers, he could also find himself hitting higher in the order this season. This is a flier if there ever was one, but a flier worth a gamble at his ADP in deeper leagues.

Buying into these middle infield fliers? For more great rankings, strategy, and analysis check out the 2021 FantraxHQ Fantasy Baseball Draft Kit. We’ll be adding more content from now right up until Opening Day!