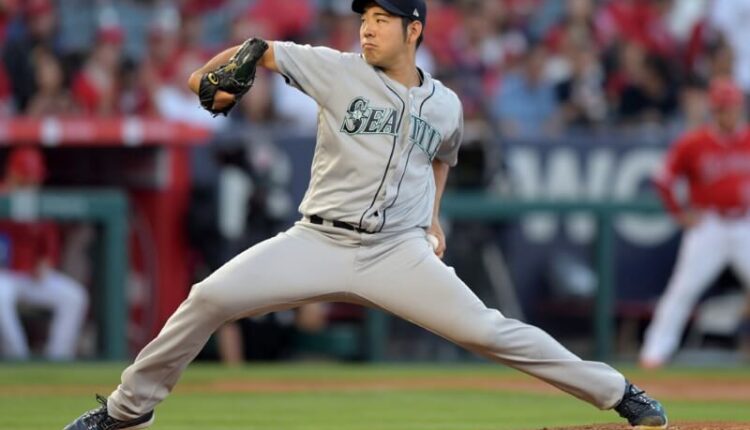 The calendar has yet to flip to 2021, all of the big-name free agents remain on the market, and we don’t even know what kind of season we will have next year. But if you’re like me, none of that matters when you see contest lobbies open up and drafts starting. Draft and Holds and Best Ball leagues are filling up in the Fantrax lobby and The NFBC. These 40-to-50 round drafts are a great way to start the draft season. Not only do you get to scratch that draft itch, but it goes a long way in getting to know the player pool and identifying those late-round values. Having so many roster spots to work with allows you to take some chances on players we think may help us in our quest for fantasy championships. In this article, I identify seven intriguing late-round starting pitchers that may be worth a gamble.

Late-Round Starting Pitchers to Gamble On

Miami has become a bit of a starting pitcher factory of late. Sixto Sanchez, Pablo Lopez, and Sandy Alcantara have all been garnering their own hype in the top-150. Meanwhile, Elieser Hernandez has made some impressive strides of his own.

Unfortunately, his season was cut short by a lat strain. Our resident Doctor of Physical Therapy, Nic Civale, actually wrote about the injury outlook here. Hernandez finished the 2020 season with 25.2 innings, 34 strikeouts, a 3.16 ERA, 3.89 FIP, and a 3.54 xFIP. These impressive numbers follow a trend of improvements he’s made over the last three seasons. Hernandez has improved on his strikeout, walk, zone-contact, and swinging-strike rates year-over-year since 2018. Take a look at the numbers.

That is the kind of growth you love to see from a young starting pitcher. But as impressive as those numbers are, there’s still one glaring weakness to Hernandez’s game. While his slider is his bread and butter, it’s the lack of a viable third pitch to get him three times through the order. He had a 1.93 ERA the first time through, a 1.64 the second time, but a whopping 54.00 ERA the third time.

Could his changeup be that third pitch? It’s been used effectively against left-handed hitters, having thrown the pitch 25 times against lefties last season and only twice against righties, but did not allow a single hit off it. He may have gotten lucky there as the pitch saw a drop in both movement and velocity difference from the fastball in 2020. Until he can refine that third offering, I wouldn’t expect him to go too deep into games. Regardless, there’s plenty to like, and things are definitely going in the right direction for this young starting pitcher.

First of all, I have to plug one of Fantrax’s own, The SP Streamer Podcast. Michael Simione recently had Michael Lorenzen on for a brief interview. I mean, how cool is that? You have to give it a listen.

Lorenzen pitched primarily out of the bullpen over the last few seasons and will make his transition to full-time starter in 2021. He ended the season with 33.2 innings and a 4.28 ERA. But things really weren’t as bad as the surface numbers would indicate. After a rough three outings, Lorenzen really locked things down. From August 1st on, he had a 3.19 ERA, 2.77 FIP, and 4.51 xFIP. This included two impressive starts against the Pirates and White Sox. On the year, he improved his swinging-strike rate from 13.9% to 14.5%. And the Statcast metrics are trending in the right direction. Take a look at his profile below. 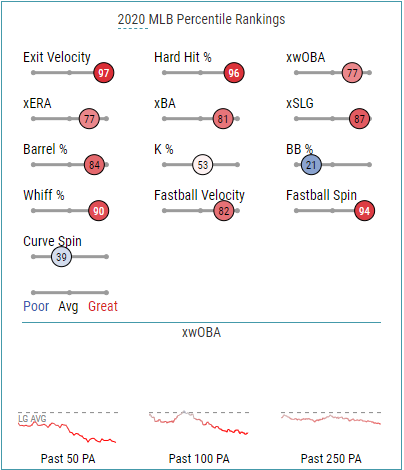 I can get behind that. Lorenzen expects to stay in the rotation all season. Improving on that walk rate will go a long way to doing just that. He’s already lowered his xBA, xSLG, and xwOBA over each of the last three seasons. I’m getting him at his ADP and taking a chance on Lorenzen putting it all together in the rotation. You can call me a #LorenzenLover.

Adbert Alzolay solidified his spot in the Chicago Cubs’ starting rotation with a stellar 2.95 ERA, 3.05 FIP, 3.62 xFIP, and 29 strikeouts in 21.1 innings. Alzolay compliments a mid-90’s fastball with a nasty slider, a changeup, and a curveball that induce swinging-strike rates of 18.9%, 19.4%, and 12%, respectively. And when I say nasty slider, I mean it’s a real weapon. Check it out.

The slider was actually Alzolay’s featured pitch with 39.8% usage. It came with a .028 average, .091 xBA, and a .138 xSLG. Overall, some of his Statcast metrics were among the best in the league, in particular his xBA, xSLG, and Barrel%. 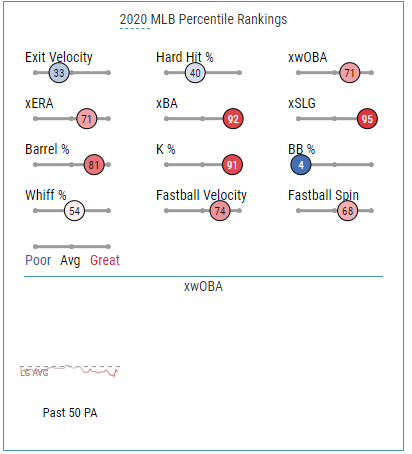 If he can tame that walk rate, watch out. Of all the late-round starting pitchers on this list, he has maybe the highest upside.

While Yusei Kikuchi’s time with the Mariners hasn’t gone as planned since signing from Japan, 2020 brought some indications that he may be on the verge of breaking out. Kikuchi finished the season with a 5.17 ERA, 3.30 FIP, 3.78 xFIP, and 47 strikeouts in 47 innings. The first thing that jumps out there is the difference between his ERA and ERA indicators. His ERA-FIP of 1.87 was third-highest in baseball among starters with at least 40 innings. He also had the third-lowest strand rate at only 59.9%. It is safe to say that Kikuchi was unlucky in 2020. So, what was behind the improvements under the hood?

First, he added 2.3mph to his fastball, raising his average velocity from 92.9 to 95.2. Second, he ditched the curveball for a more effective cutter, which was among the hardest thrown in the league and induced a 10.5% swinging-strike rate. He actually had a double-digit swinging-strike rate on all his pitches, including his cutter, fastball, slider, and change. Together, they produced a 12.1% swinging-strike rate overall, a 3.3% improvement from 2019, and an 81% Z-contact rate, down 8.3% from the previous year. Kikuchi also raised his ground ball rate from 44% to an impressive 52%. Avoiding contact and keeping the ball on the ground is a recipe for success. Kikuchi is one of the late-round starting pitchers I’ll be targeting heavily in drafts.

It was pretty much a disaster season for Anthony DeSclafani, who threw only 33.2 innings with a 7.22 ERA. Still, San Francisco saw something they liked in DeSclafani and signed him to a 1-year $6 million deal. Might they have just discarded a season in which, perhaps, he was never really able to get going? DeSclafani actually started the season on the injured list with a strained right teres major, part of the shoulder. It’s easy to see how that could impact him in a shortened season.

San Francisco is an excellent landing spot for DeSclafani. They’ve been able to help turn around the careers of other starting pitchers such as Drew Pomeranz, Drew Smyly, and Kevin Gausman. Additionally, the park is a perfect fit for him. One of DeSclafani’s struggles has always been against left-handed hitters, with a career .493 slugging percentage allowed to them, a stark contrast from the .377 slugging to righties. Now, he moves from the park that has allowed the most home runs to left-handed batters over the last five seasons to the park that has allowed the fewest. In that time, Oracle Park ranks among the bottom-five in slugging percentage to lefties. Meanwhile, Great American Ball Park ranks third-highest. Yes, I’m buying into Tony Disco once again.

Could Edward Cabrera be next season’s Sixto Sanchez? Some would argue he’s bound to be even better. Cabrera, one of Miami’s top prospects, will be turning 23-years-old next April and knocking on the door of his Major League debut. After putting up a 4.22 ERA and 8.34 K/9 in 100.1 innings in 2018 at the Single-A level, Cabrera made an adjustment to his arm slot and saw some drastic improvements in 2019. The change brought on a velocity jump with much better results. He put up a 2.02 ERA and 11.33 K/9 in 58 innings at High-A before being promoted to Double-A, where he continued to impress with a 2.56 ERA and 10.01 K/9.

Apart from Pablo Lopez’s team-leading 62.1 innings, no other Miami starting pitcher threw more than 47 innings in 2020. And manager Don Mattingly has already expressed that the rotation could be facing some innings restrictions next season. Edward Cabrera will get his shot at some point in 2021 and could be worth a late-round flier in your draft and holds.

Much like the previously mentioned Kikuchi, Lindblom’s 2020 numbers appear to be tied to some bad luck. He finished his first season back from the KBO with a 5.16 ERA, 3.88 FIP, 4.24 xFIP, and 52 strikeouts in 45.1 innings. His 1.29 ERA-FIP was fifth-highest in the majors last season. His .316 BABIP and 66.5% strand rate are also some indicators of misfortune. Apart from some expected regression, Lindblom showed some encouraging skills to build on next season with a 12.4% swinging-strike rate and a solid 18.8% K-BB rate.

Got some other late-round starting pitchers in mind? Don’t be a hoarder! Drop some names in the comments below.

The hot stove is just starting to heat up, but FantraxHQ has been cooking for a while now. Keep track of all our 2020-21 MLB Offseason Analysis.