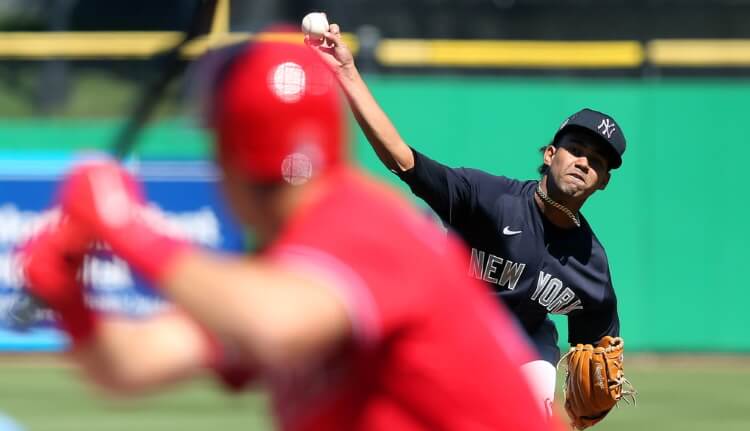 We’re at that point in the offseason where Jordan Lyles and Paolo Espino pique my interest. The main reason for that involves their increased slider usage. Thanks to @DynastyOneStop for helping with the spreadsheet skills. If you’re itching for more leagues, Nathan has you covered. Lyles and Espino increased their slider usage in 2021, with Lyles completely changing the pitch.

Just because a pitcher increases pitch usage, it doesn’t mean it automatically translates to success. However, we find intriguing pitch results, movement, and changes in 2021. Although this topic isn’t as exciting as Finding the Next Austin Riley, it should help fantasy managers in deeper leagues. 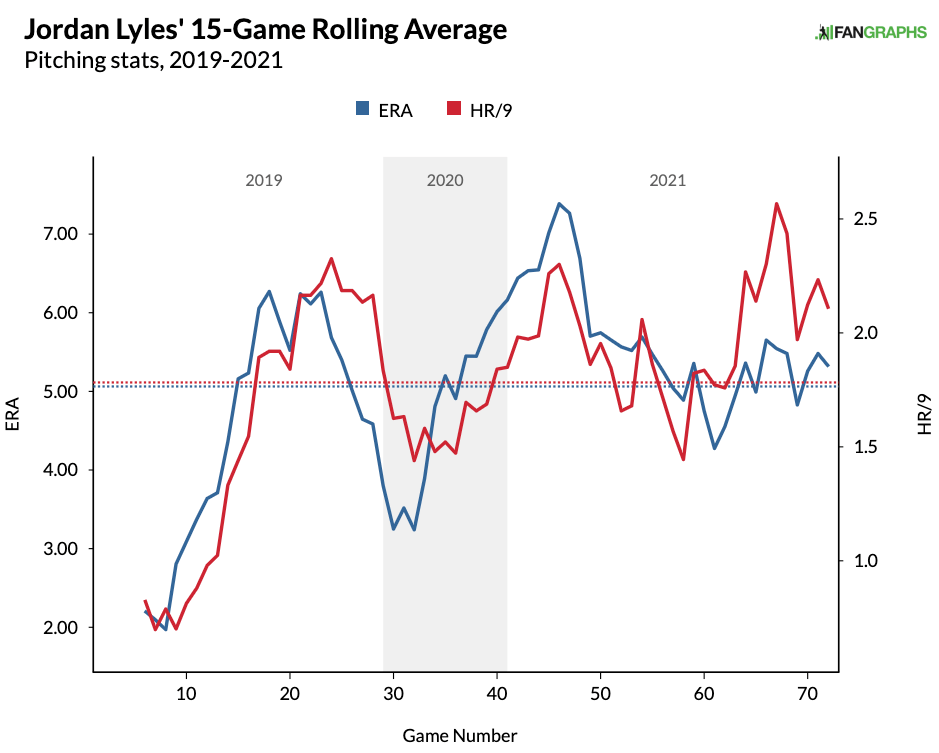 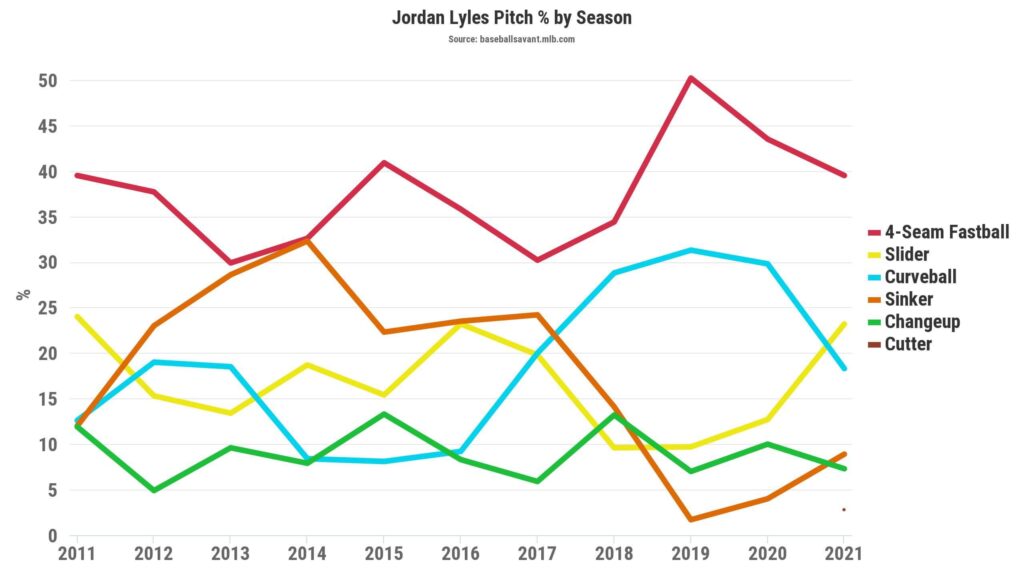 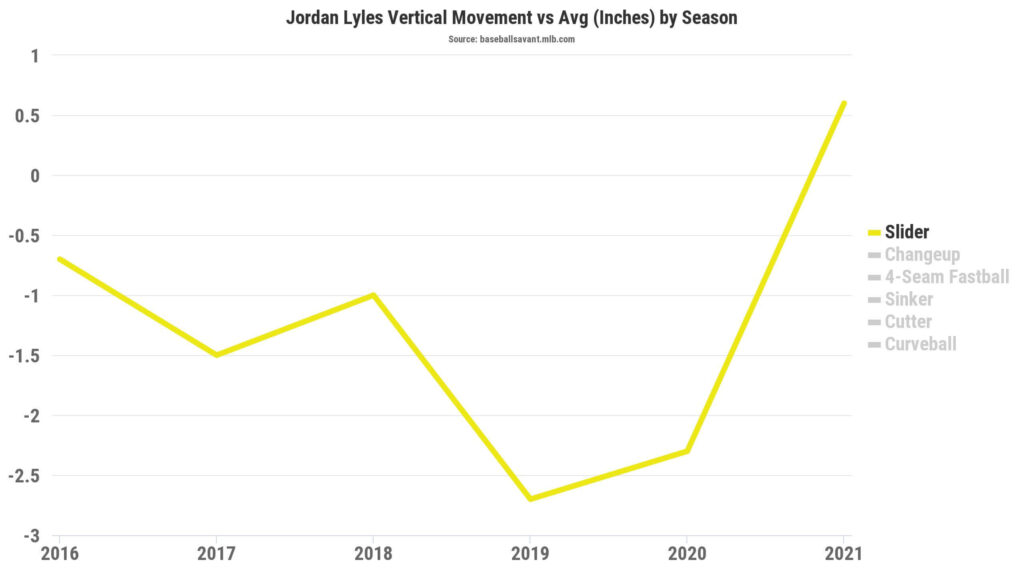 That led us to look at the movement profile on the slider, given the reduced velocity. Jordan Lyles’ slider dropped and broke more in 2021. The slider never possessed above-average vertical movement but usually broke slightly more than the average pitch. 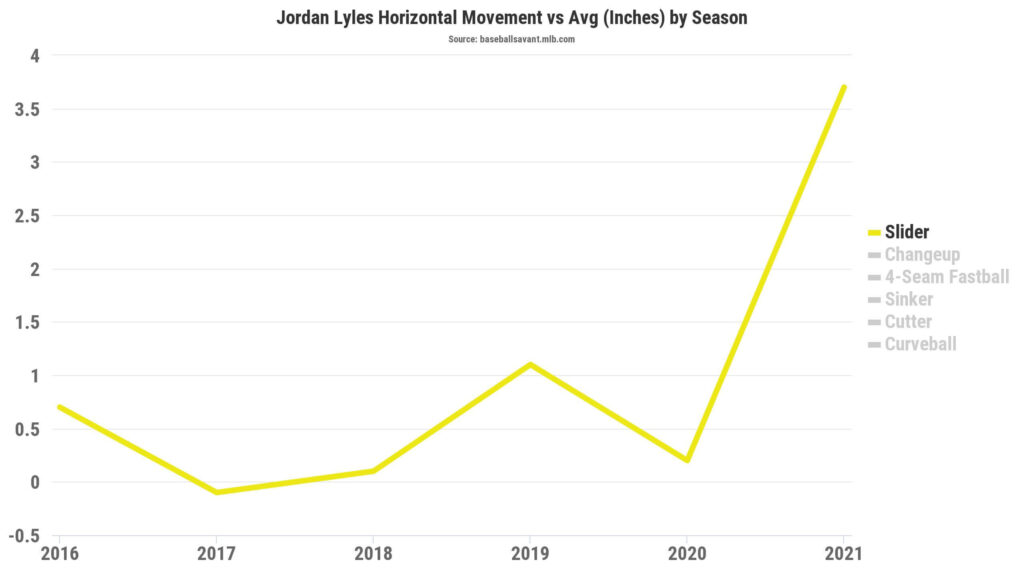 The slider’s horizontal break of 10.2 inches nearly tripled from previous seasons. Lyles’ slider broke 3.7 inches more than the average, which seems that pitch looked much different, given the reduced velocity. That said, it’s hard to compare to past seasons, but the slider elicited a career-best 14.7% swinging-strike rate compared to a career rate of 11.6%. 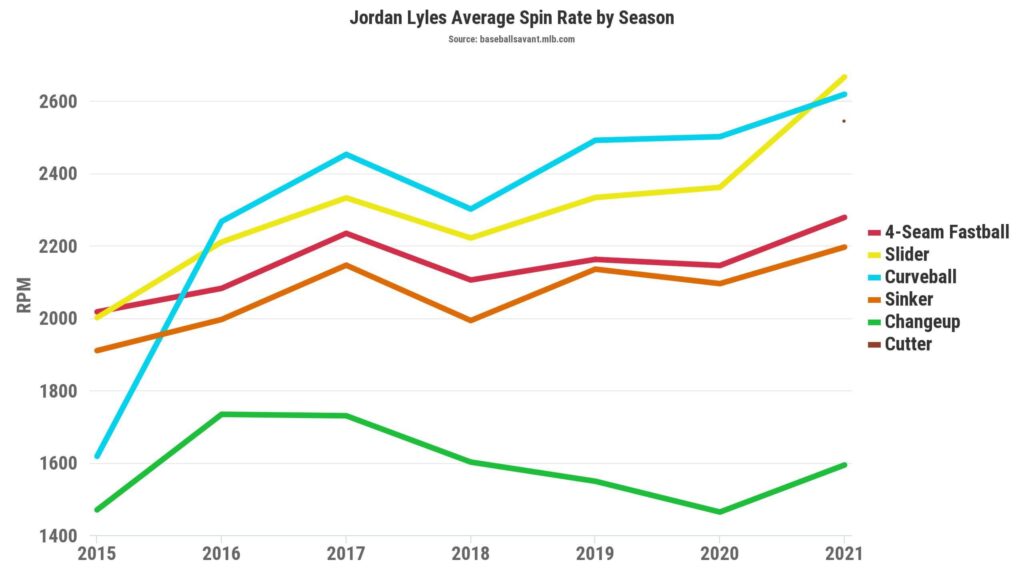 Unsurprisingly, the spin rate on the slider increased to 2,666 RPM. With the velocity, movement, and spin rate changes, Lyles slider evolved into a more sweeping slider. Given the higher average velocity, the slider didn’t break or drop much at all. 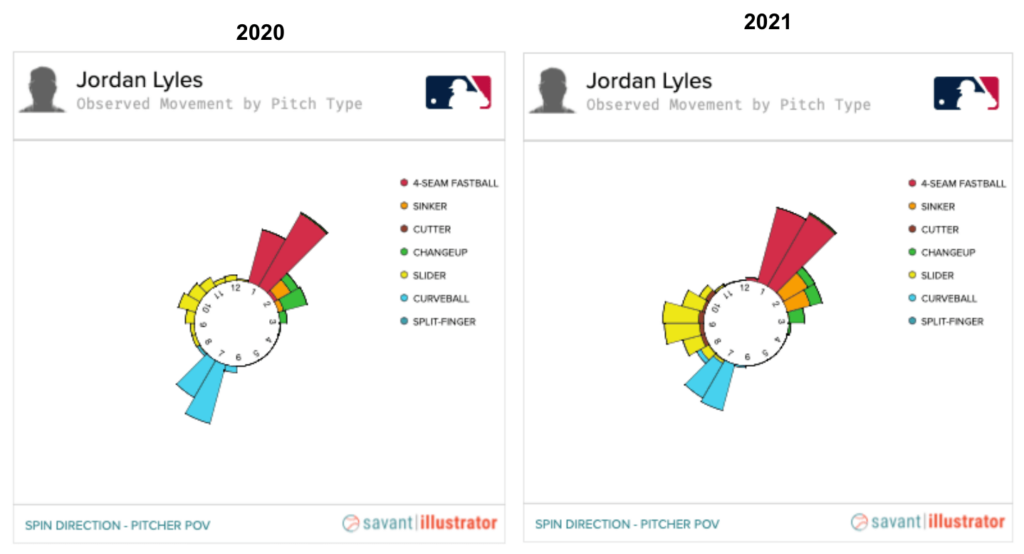 The Orioles signed Jordan Lyles to a one-year contract worth $7 million. Lyles projects as their SP2 behind John Means, with Bruce Zimmermann, Keegan Akin, and Zac Lowther filling out their rotation. However, D.L Hall and Grayson Rodriguez could debut sometime in 2022.

Overall, the point of noting Jordan Lyles involved the increased slider usage. Then it led to realizing the movement profile, velocity, and results changed. While I wouldn’t recommend drafting Lyles in 15-team redraft leagues or anything smaller, we’ll want to monitor him as a streaming pitcher. In Draft Champions leagues, Lyles is an ideal late-round pitcher for innings. The projection systems don’t look kind with a 5.37 ERA, 1.42 WHIP, 18.4% strikeout rate, and 7.9% walk rate in 148 innings per ATC.

HEADLINE: These are the BIGGEST changes we've seen to a park in years and they will have a BIG impact

Baltimore adjusted their home park dimensions, and according to Derek Carty, that makes it a neutral park. Regardless, Lyles will need to improve the awful 1.90 HR/9 in 2021, and theoretically, the home park may help. None of that matters if Lyles’ four-seamer keeps getting crushed with a .603 SLG and .412 wOBA in 2021.

Although we’re dealing with a small sample since Paolo Espino barely pitched in the majors before 2021, he increased the slider usage to 16.4% from 9.1% in 2020. The curveball is Espino’s second-most used pitch at 24.2%.

Paolo Espino’s best pitches involve the breaking pitches in the slider and the curveball. Both elicit double-digit swinging-strike rates with the curve at 15.5% and slider at 12.7%. We’re not here to discuss the curve, but it has a silly 42.6% O-Swing% too, with the slider close behind with a 36.4% O-Swing%. That said, the curve also warrants some notes later. 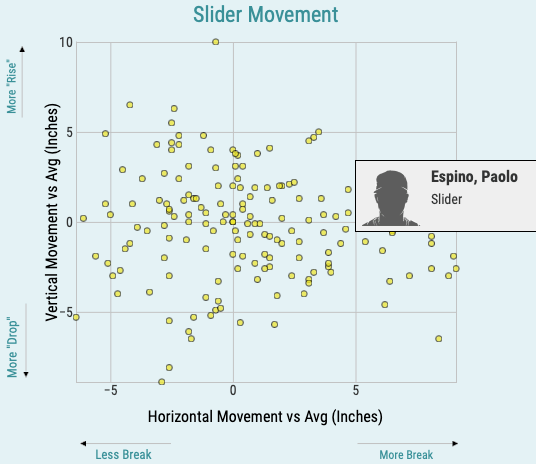 What Espino lacks in velocity with an 89 mph four-seamer, he makes up with movement on with 2.4 inches more vertical movement than the average pitch. Meanwhile, Espino’s slider has above-average horizontal movement with 4.7 inches more break. Espino’s breaking pitches avoided contact, especially outside the zone. The curve had a 68.8% Contact% with the slider allowing a 73.7% Contact%. 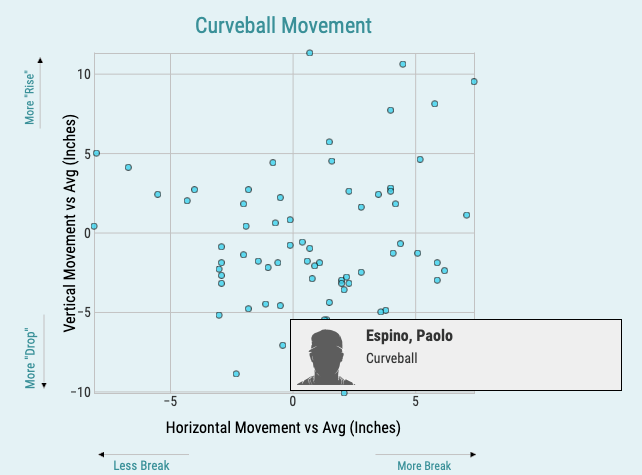 Espino’s curve gets a whopping 74 inches of drop, which translates into 7.1 inches versus the average. That ranks 4th amongst all curveballs. It’s a slow curve at 71.2 mph with that 1-7 type break.

Although Espino’s arsenal isn’t overwhelming, they’re his best pitches with a -3 Run-Value on the slider and -4 on the curveball. We noted the swinging-strike rates earlier, but the curve allowed a .289 SLG and .221 wOBA in 2021. Espino’s slider finished with a .462 SLG and .310 wOBA.

Espino limits the walks but also appears to command his pitches well, evidenced by the -20 Run-Value in the shadow area of the zone. Unfortunately, Espino had a +2 Run-Value in the heart. However, Espino pitches to contact with an 89.2% Z-Contact% and 81.4% Contact%, 4-5% higher than the league averages.

Kudos to folks that came this far to read about Paolo Espino’s 2022 outlook with above-average movement on three different pitches. According to Roster Resource, Espino projects as the Nationals’ fifth starter with the top two or three spots locked up in Stephen Strasburg, Patrick Corbin, and Josiah Gray.

ATC projects Espino for 90 innings with a 5.05 ERA and 1.37 WHIP. Like Jordan Lyles, fantasy managers won’t need to draft Espino in 15-team redraft leagues outside of draft-and-hold formats. However, monitor Espino as a streamer that may only give you five innings. Espino reached five innings in 12 of his 19 starts, but it’s hard to have confidence in a 35-year-old journeyman minor league pitcher before 2021. But, hey, Espino increased the slider usage, plus three of his pitches possessed above-average movement.

Deivi García threw 31 sliders in 2021 that accounted for 20.3% of his total pitches, up from 9% in 2020 – his least used offering that season. In the small sample, García boasts three pitches (changeup, curve, and slider) with a double-digit swinging-strike rate. 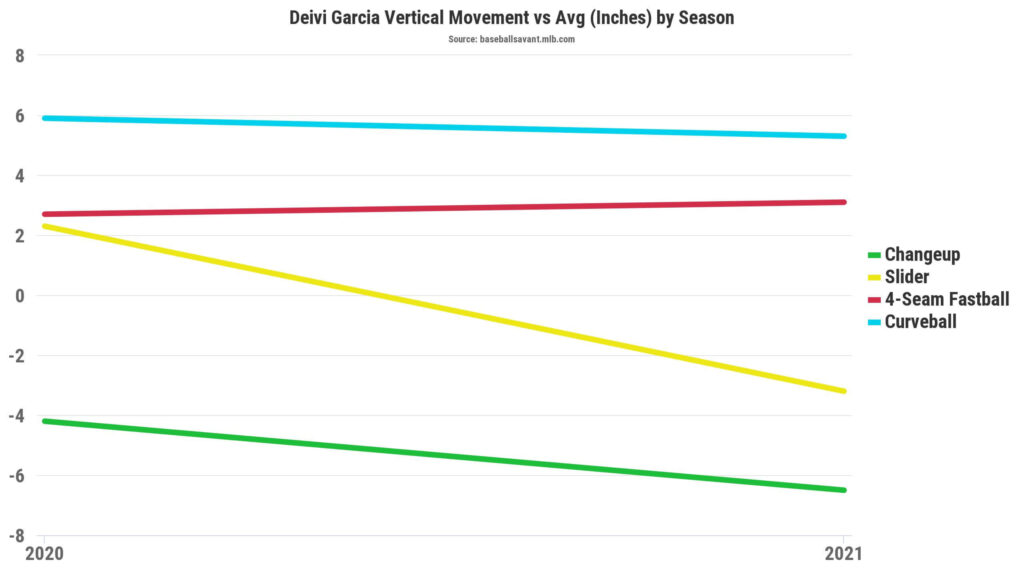 It’s hard to glean many takeaways from García’s pitch movement since it’s a tiny sample. However, in 2020, the curveball, four-seamer, and slider possessed above-average vertical movement that typically translates into whiffs. The movement profile for all pitches looks similar in 2021, but it’s probably not a large enough sample to qualify. 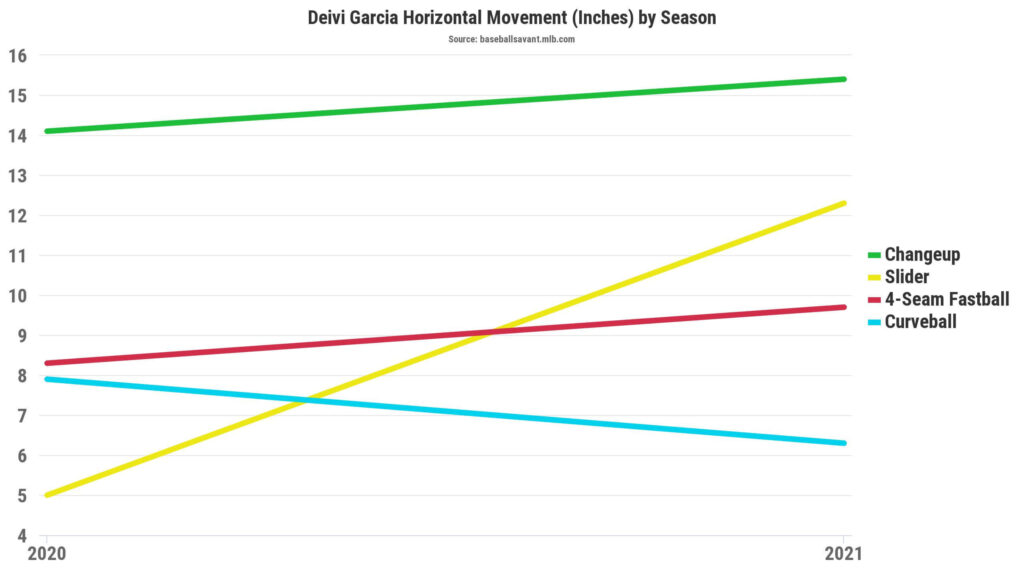 Again, a small sample. However, given the reduced vertical movement on the slider, it broke more – 3.1 inches more than average. The slider went from five inches of horizontal movement in 2020 to 12.3 inches in 2021. Let’s monitor the slider shape in 2022.

Unfortunately, Deivi García doesn’t have a clear role on the Yankees pitching staff, especially with Luis Severino expected to be ready for the season. Severino, plus the emergence of the crafty Nestor Cortes, adds to the rotation depth. They also have Michael King, Clarke Schmidt (a personal favorite), and Luis Gil possibly making spot starts.

Overall, I’m mentioning García as a name to monitor during the 2022 season. However, the lockout affects García and tons of other prospects, so hopefully, it gets resolved soon. García goes near pick 700 in Draft Champions leagues makes him a watch list type player on waivers.