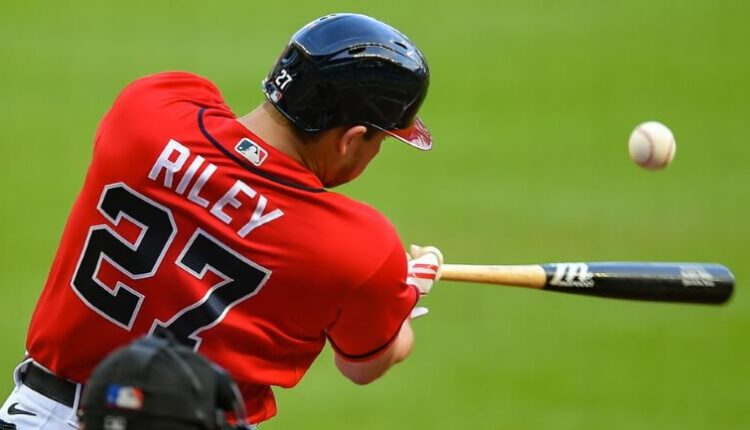 Last week, we looked at three hitters to become the next Austin Riley in Part One to post a career-best season. With those hitters, we observed quality spurts and possibly less-exciting names. We’ll review the arbitrary Austin Riley threshold to identify potential breakout hitter candidates. This week, we’ll identify three hitters in the later rounds, one of which plummeted in 2021. It’s a meaty one, so let’s dive in.

That aligned with the prospect profile indicating a below-average hit tool with a concerning 77.7% Z-Contact% and 66.9% Contact% combined in 2019 and 2020. Then in 2021, Austin Riley crushed 33 home runs with 91 runs and 107 RBI in 662 plate appearances. Even Riley’s .303 batting average based on the .368 BABIP boosted the value as No. 28 overall hitter according to the Razzball Player Rater between Julio Urias and Zack Wheeler. The BABIP jumped almost 100 points, but the line drive rate remained healthy at 25.1% in 2021 compared to a career rate of 24.8%.

Even Riley’s contact quality improved, evidenced by the 13.3% barrel rate (83rd-percentile) and 114.2 mph maximum exit velocity (92nd-percentile). Not only that, but the plate discipline improved with a 34.6% O-Swing%, 82% Z-Contact%, and 73.9% Contact% in 2021. Although Riley’s BABIP could regress, we admire the healthy line drive rate and contact quality.

When we examined potential breakout pitcher candidates, not all met every threshold. That said, the breakout hitter candidates likely won’t fit into all categories like Austin Riley. In 2021, Austin Riley had a 211 ADP with a minimum pick of 102 and 394 maximum. However, in the early 2022 Draft Champions leagues, Riley’s ADP sits around pick 62 over the past few weeks.

Granted, part of Riley’s impact involved health and the ability to compile 662 plate appearances with two games missed in the regular season. Let’s dive into part one of the series to find breakout hitter candidates as the next Austin Riley.

The No. 5 overall pick from the 2013 MLB Draft in Clint Frazier hasn’t lived up to expectations. Granted, Frazier noted mental health issues, depth perception, and injuries throughout his MLB career. Although Frazier rates poorly in the defensive metrics, evidenced by the -25 Defensive WAR, the depth perception would be significant for fielding any line drives or pop flies.

Regardless, the once top prospect now landed on a new team in the Chicago Cubs. We know the Cubs seem to be re-tooling with the 2021 trade deadline moves of Anthony Rizzo, Kris Bryant, Javier Báez, and Craig Kimbrel. So Clint Frazier has a prime opportunity for playing time in the Cubs outfield. It’s hard to look at any of Frazier’s seasons since he never compiled more than 246 plate appearances. In Frazier’s career (2017-2021), he totaled 29 home runs, 100 runs, 97 RBI, and seven stolen bases with a .239 batting average in 807 plate appearances.

However, Clint Frazier made some plate discipline changes over the past two seasons. From 2017 to 2019, Frazier possessed a 6.5% walk rate, .308 OBP, and 25.6% O-Swing%. We used the threshold of 2020 because Frazier made swing adjustments in 2020 to simplify the approach that translates into the underlying metrics. 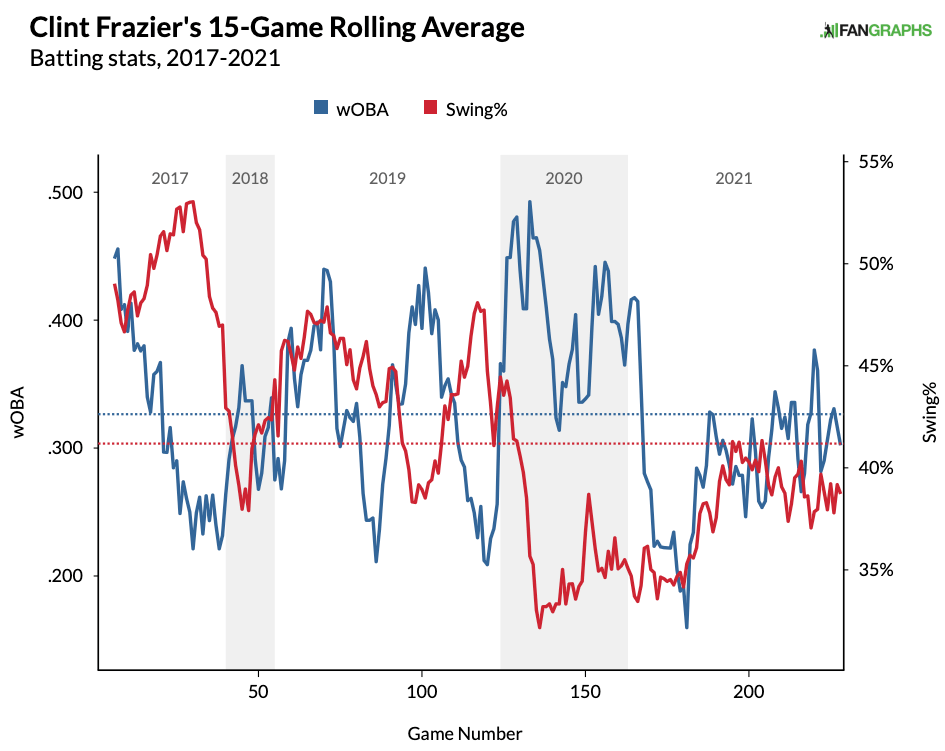 Again small samples, but Clint Frazier boasted double-digit barrel rates over the past three seasons with a career 10.9% barrel rate. Unfortunately, Frazier never logged enough batted ball events to qualify except in 2020. However, Frazier’s barrel rates and maximum exit velocities typically ranked in the top 25th-percentile of the league when lowering the BBE. 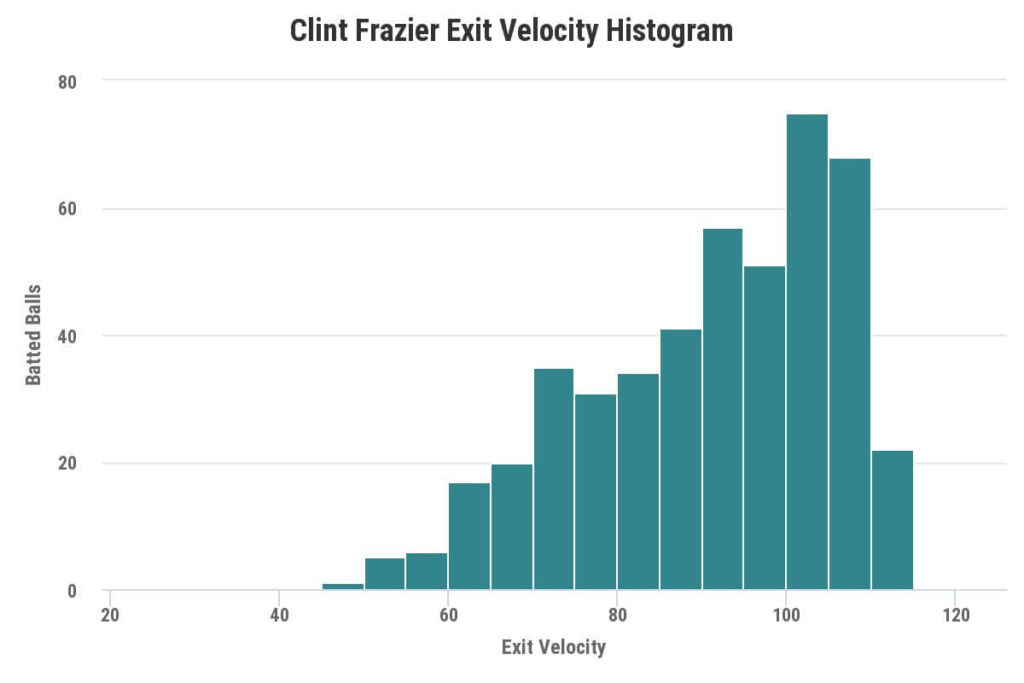 Meanwhile, 34.6% of Clint Frazier’s batted ball events recorded an exit velocity of 100 mph or higher. We note that because the power exists with Frazier. He should smack 25-30 home runs if given the playing time.

Since the beginning of February, Clint Frazier’s ADP in Draft Champions leagues sits right inside the top-400 picks. It’s a fun group of hitters, including Jorge Mateo, Paul DeJong, and Chas McCormick. As noted, Frazier checks several of the boxes with the improved plate discipline, above-average contact quality, better on-base skills, and a chance for a career-best season.

Assuming a high amount of PA, I like Frazier's ADP#FantasyBaseball pic.twitter.com/5O7dtJwAC0

STEAMER looks most optimistic with a .237 batting average and .327 OBP. Meanwhile, THE BAT X and ATC remain similar with 13 home runs, 80+ runs plus RBI, and a few stolen bases, yet a slightly lower batting average and OBP. With the universal DH, Frazier should have locked-in playing time with the Cubs with the chance to play in the outfield as needed. Ian Happ (535 PA) and Willson Contreras (483 PA) led the Cubs in plate appearances, not including the core hitters that moved via trade.

Finally, the STEAMER 600 gives us a glimpse into Frazier’s upside with 23 home runs, 70 runs, 72 RBI, and five stolen bases with a .237 batting average and .327 OBP. Frazier’s projected line isn’t far from teammate Ian Happ, who goes over 200 picks earlier, except for lineup spot, plus a few home runs and stolen bases.

As a consumer and writer of fantasy football, Alec Bohm draws me in with the linebacker frame of 6-foot-5 and 220-pounds like Austin Riley. After a small 2020 sample of 180 plate appearances, where Bohm hit .338 with a .410 BABIP, Bohm’s production dipped in 2021. Bohm compiled 417 plate appearances in 2021 due to a groin injury before the season, COVID-19 in the middle, and then a wrist injury towards the end. When we add in Bohm’s struggles, it feels like we could expect a bounceback in 2022.

Alec Bohm (#2 #Phillies prospect) went deep last night against the Mets.@ProspectJesus’s take:
Back 2 Back! In the bottom of the first Bohm took a 92 mph meatball to the opposite field going back to back with Bryce Harper in the process.#RingTheBell #PLive pic.twitter.com/gnXyPGQ3H3

As a prospect, Alec Bohm boasted an above-average hit tool with potential plus-graded power. However, the game power peaked at 14 home runs at Double-A in 2019. Bohm’s career 23.6% LD% with an 82.4% Z-Contact% and 76.2% Contact% aligns with the hit tool grade, but there’s a chance that improves with more reps.

Although we admire Alec Bohm’s line drive rate, the career 52.9% groundball rate concerns us. From a potential power standpoint, even Bohm’s 23.6% FB% and 28.8% Pull% seems odd because that’s unusual for power hitters. We know the narrative – if this hitter could just hit more flyballs, but that’s easier said than done.

If a hitter possesses a high groundball rate, they need to crush flyballs and line drives. In 2020, Bohm ranked 85th with a 93.6 mph exit velocity on FB/LD, then in 2021, Bohm finished with an identical exit velocity but ranked 90th. That’s not elite, but Bohm’s hard-hit rate ranked in the top 20th-percentile the past two seasons. 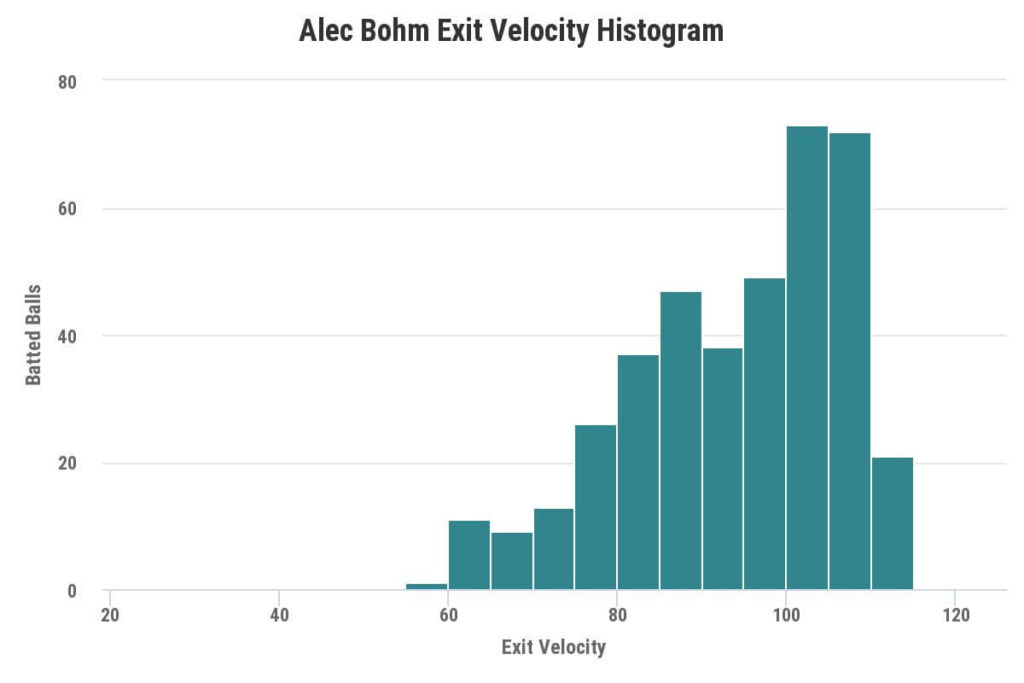 However, it’s still a smaller sample. Regardless, we know the raw power exists, with 41.6% of Bohm’s batted ball events having an exit velocity of 100+ mph and a 111.6 mph maximum exit velocity (82nd-percentile). Noticing Bohm’s 10.3% barrel rate dip to 6.6% in 2021 concerns us, but we could toss that aside with the injuries and COVID-19.

Let’s summarize the concerns, which involve the lack of home runs and counting stats, evidenced by the total 11 home runs, 70 runs, 70 RBI, and five stolen bases with a .274 batting average in 597 plate appearances throughout Alec Bohm’s career. As noted earlier, Bohm’s raw power exists, but it hasn’t shown up in the home run totals. Add in the heavy groundball rate with the low flyball and pull rates, and that’s a concerning profile.

Unfortunately, the projections look gross. THE BAT X appears most optimistic with 14 home runs, 59 runs, 55 RBI, and four stolen bases with a .265 batting average. However, it comes with 487 plate appearances in the projections, meaning they’re baking in missed time. If Alec Bohm improves the EV on FB/LD and lowers the groundball rate, there’s a chance we could witness an Austin Riley-type breakout. Overall, that assumes a career-high in home runs and counting stats to follow.

First off, Keston Hiura qualifies more as a bounceback hitter given the recent struggles after Hiura smashed in his 2019 rookie season. Like Eugenio Suárez a couple of weeks ago, Hiura warranted an extensive dive.

Outside of the metrics, we know the off-field issues likely impacted Keston Hiura about his mother dealing with a form of lymphoma. We’re so focused on the metrics and data, but there’s a human side of baseball to consider. With the potential swing changes for Hiura removing the high leg kick, that leads us to buy into a 2022 bounceback season.

Up last night researching Keston Hiura as a bounceback candidate. A year ago, this sharp mind @JDrake349 wrote a @ProspectsLive article about Hiura's possible swing adjustments.

Cool to see it seemingly happening in 2022 via hitting coach (next tweet)https://t.co/UUW1OUh88p

Will Sammon of The Athletic notes that Sean Thompson, Hiura’s personal hitting coach, and Hiura have worked on adjusting the leg kick to “fix” the timing issues. Thompson mentions Hiura’s timing issues caused alignment issues with the upper and lower body, which led to problems with the high fastball. My buddy Joe Drake of Prospects Live also examined Hiura deeply about a year ago worth revisiting.

We love small samples, right. Well, Keston Hiura rocks a career 14.1% barrel rate throughout the past three seasons. It even peaked at 15.2% in 2021, but that came with a career-worst wOBA of .250 and a .413 xwOBAcon. Hiura’s power rivals Austin Riley, but they’re two hitters trending in opposite directions.

All jokes aside about the contact quality in the small sample since we know Hiura crushes the baseball. The main issues for Hiura involve the plate discipline, evidenced by the 61.2% Z-Contact% and 54.3% Contact% that trended down since his debut in 2019. 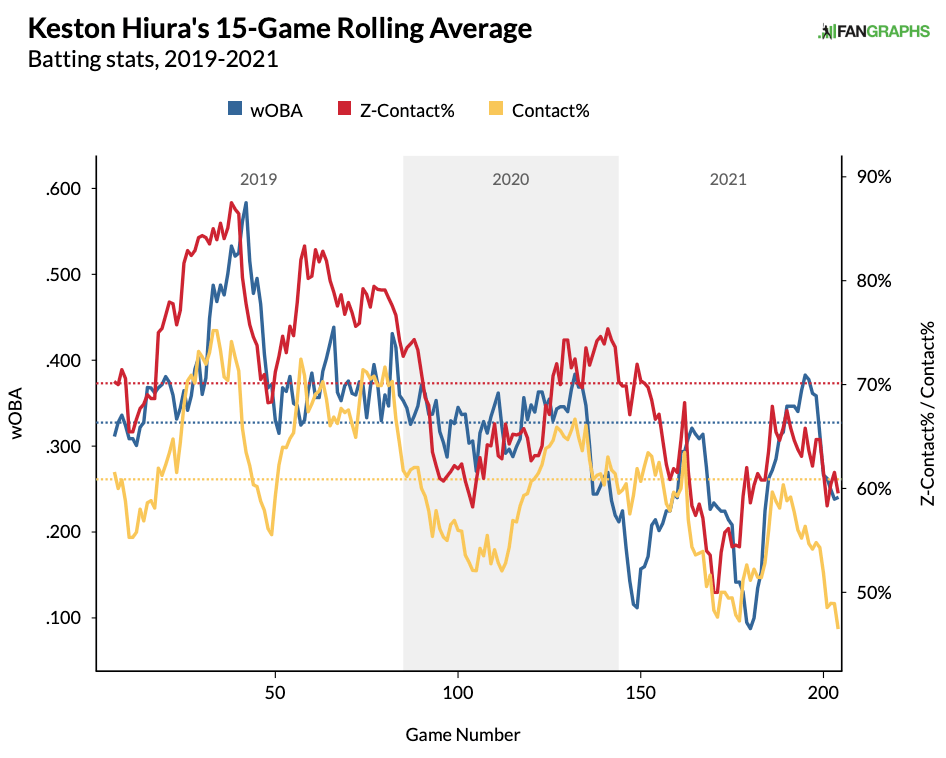 Even the overall 70.1% Z-Contact% and 60.9% Contact% throughout Hiura’s career gives us pause the past two seasons. That’s especially the case when they’re about 15-20% below the league averages in 2020 and 2021. As noted earlier, the swing adjustments should theoretically help Hiura with his timing and improve the contact rates.

Unfortunately, Keston Hiura only has first base eligibility. With the additions of Kolten Wong, Willy Adames, Rowdy Tellez, and Luis Urías, Hiura might need to garner playing time at DH. However, there’s a chance that Hiura also adds playing time in a platoon with Tellez, but the Tellez enthusiasts won’t like that. Tellez might end up in Part Three since he and Hiura crush baseballs like Austin Riley.

THE BAT X projects Keston Hiura for 13 home runs, 41 runs, 40 RBI, four stolen bases, and a .234 batting average. But, the 319 projected plate appearance includes the playing time question mark. Hiura’s ADP since February 1 sits outside the top-400 picks in a range, with hitters having worrisome playing time. It’s worth drafting Hiura with one of your last picks in 15-team redraft leagues based on the swing adjustments improving the contact rates.