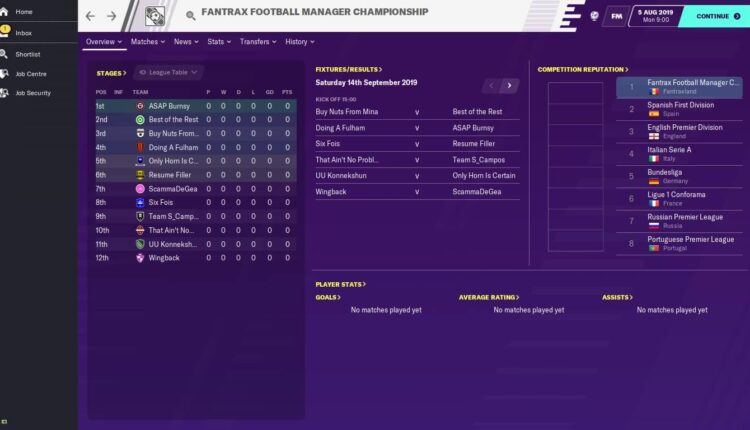 Football may have stopped in the real world, but not here at Fantrax; we’re staying to giving you your football fix with a little bit of help from Football Manager 20. On Monday, our first series kicked off with a look at @TT_CAM’s league and the opening five games of the season (check it out here if you missed it). On Tuesday, we took a look at gameweeks 6-10, and yesterday we saw what happened in gameweeks 11-15. Now it’s the business end of the season. The penultimate episode; gameweeks 16-20…

A huge matchup in Gameweek 16 as 3rd placed Konnekshun – on a 7-game unbeaten run – hosted 2nd placed Buy Nuts – themselves on a 5-game unbeaten run. Make that 8 and 6, respectively, as the two teams played out a 1-1 draw. Nick Pope had a shocker for Wingback as they lost to Doing A Fulham and Ayoze Perez’s fine season for That Ain’t No Problem continued as they hammered Best of the Rest. A second-half brace from Harry Kane saw Burnsy come from behind to win, and they now find themselves in 3rd place. Six Fois’ experiment with Buendia at left-back and Enda Stevens in the center ended in disaster as they conceded three to lose again – that’s five on the bounce now, yet they remain just three points off the top. 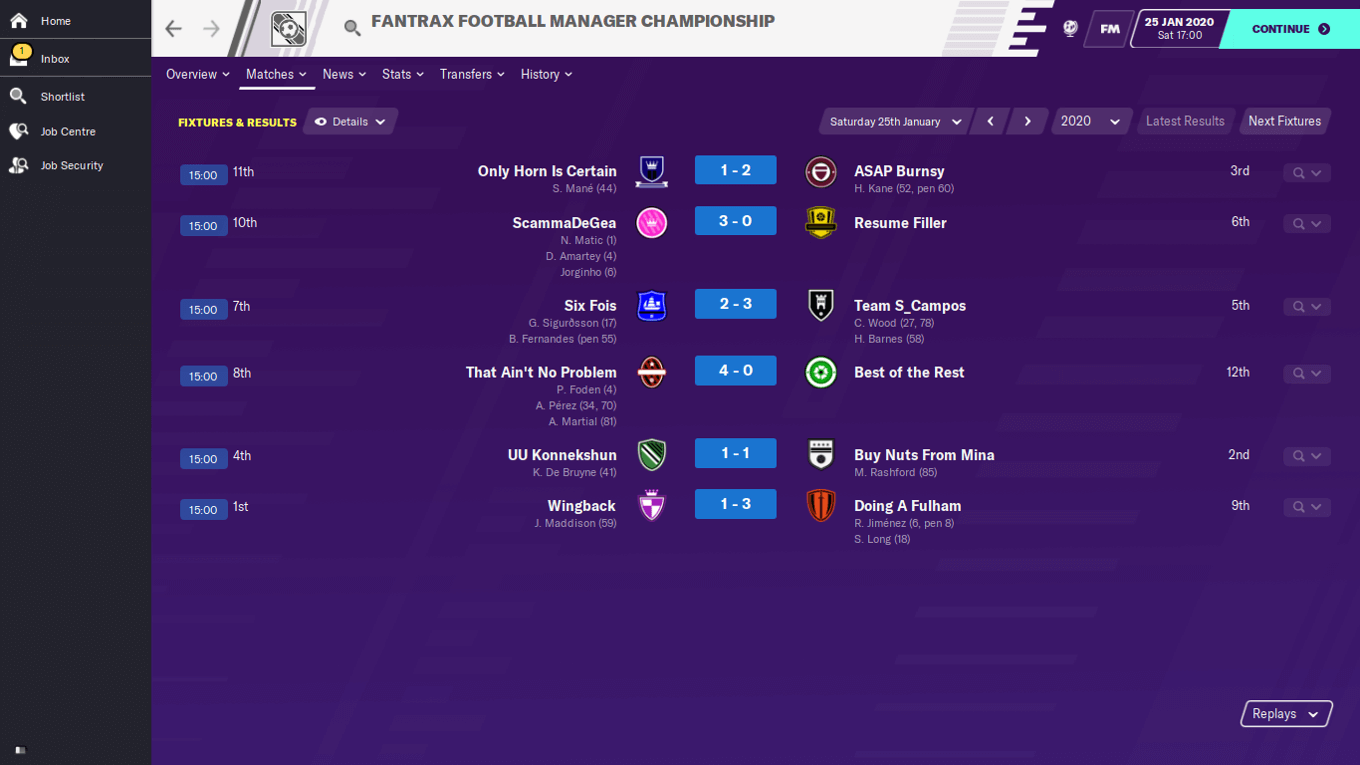 Massimiliano Allegri was sacked by Only Horn in the build-up to Gameweek 17, and the change proved effective immediately as they dented Resume Filler’s title hopes. Defenses came good for the top three as they each kept clean sheets in important victories. Haller scored his sixth of the season as Six Fois ended their run of defeats with a draw away at Doing A Fulham – the result probably ending Fulham’s faint hopes of glory. Likewise, Scamma’s campaign is surely focused on just avoiding the wooden spoon now, as they could only manage a point away at Campos. 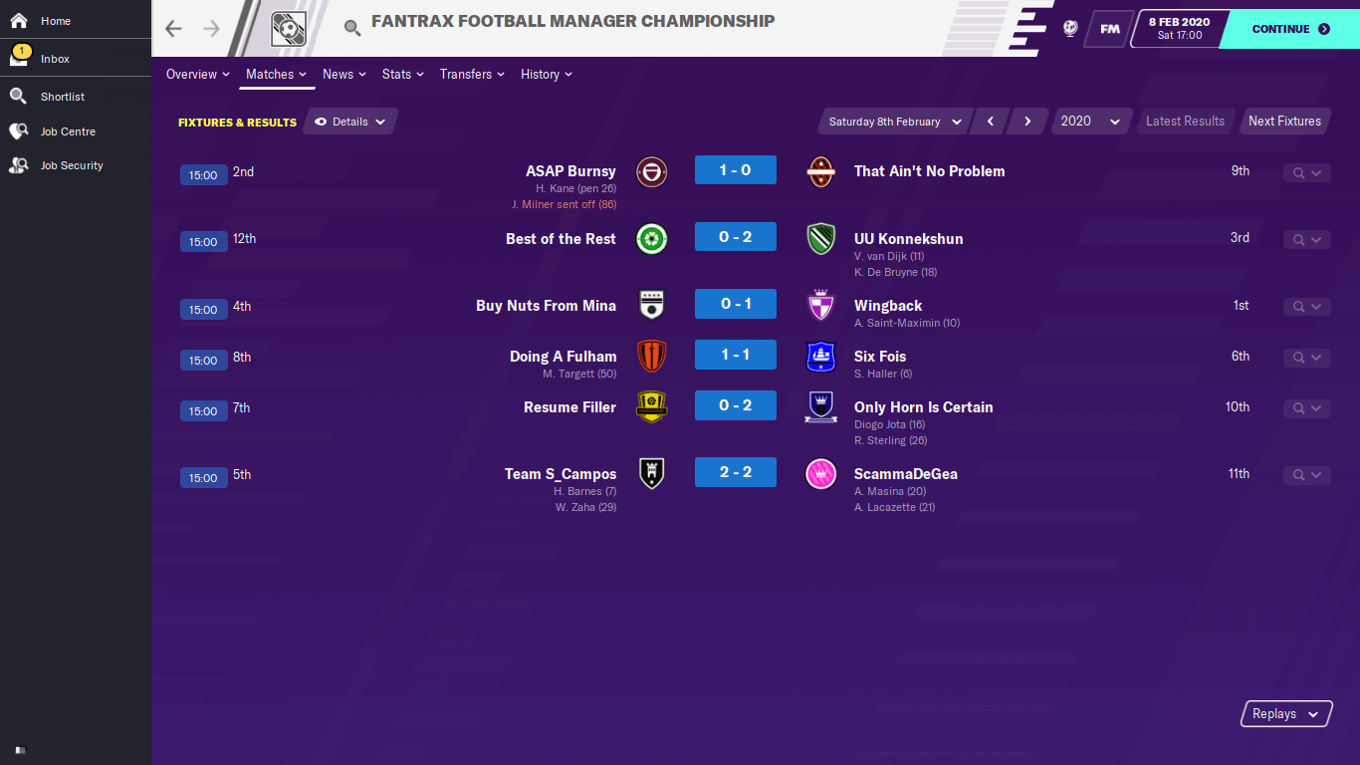 Nine weeks ago, Konnekshun was 11th. Six wins and three draws later, and they sit top of the table with just four games to go. In a squad with the likes of Kane, Abraham, and Ayew, it was a made-up Andorran center-back by the name of David Aguinaga that gave Burnsy a point to keep them 2nd. Only Horn will be wishing they’d sacked Allegri sooner after their convincing 3-0 win saw them jump to 7th. TAA returned to inspire Six Fois to victory over Wingback and keep them in the title race, and another Chris Wood goal – his 10th of the season – kept Campos firmly in the mix too. 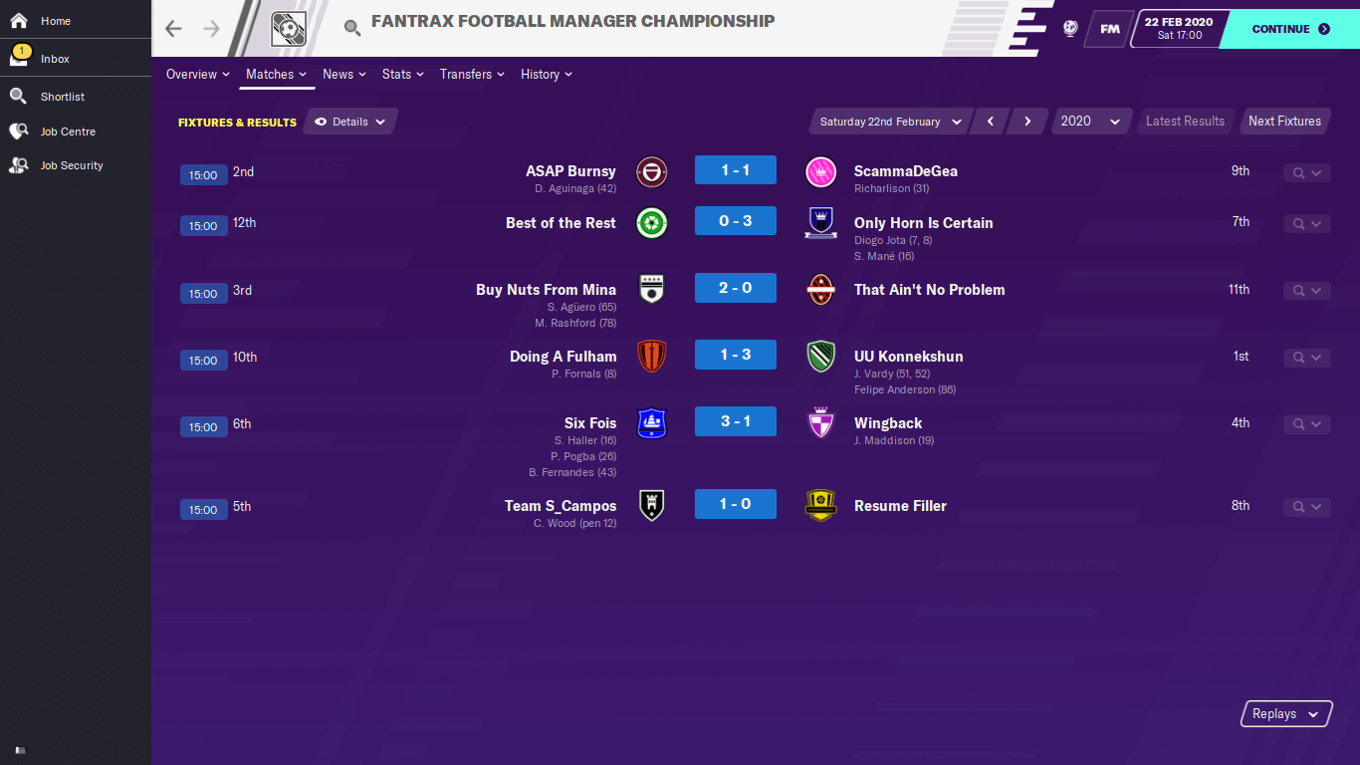 The managerial changes continued in the Fantrax Football Manager Championship as That Ain’t No Problem sacked Luciano Spalletti and replaced him immediately with none other than former Only Horn manager Massimiliano Allegri (Allegri seemingly having the astute interview skills of Marco Silva after his previous disastrous reign in the league). The change seemed to do the trick as they hammered Doing A Fulham by three goals to nil. The best player in the world right now led Konnekshun to another win, and with Burnsy, Buy Nuts and Wingback all dropping points, the league title picture was clearing up for the first time all season. And yes, that was Chris Wood scoring again for Campos. 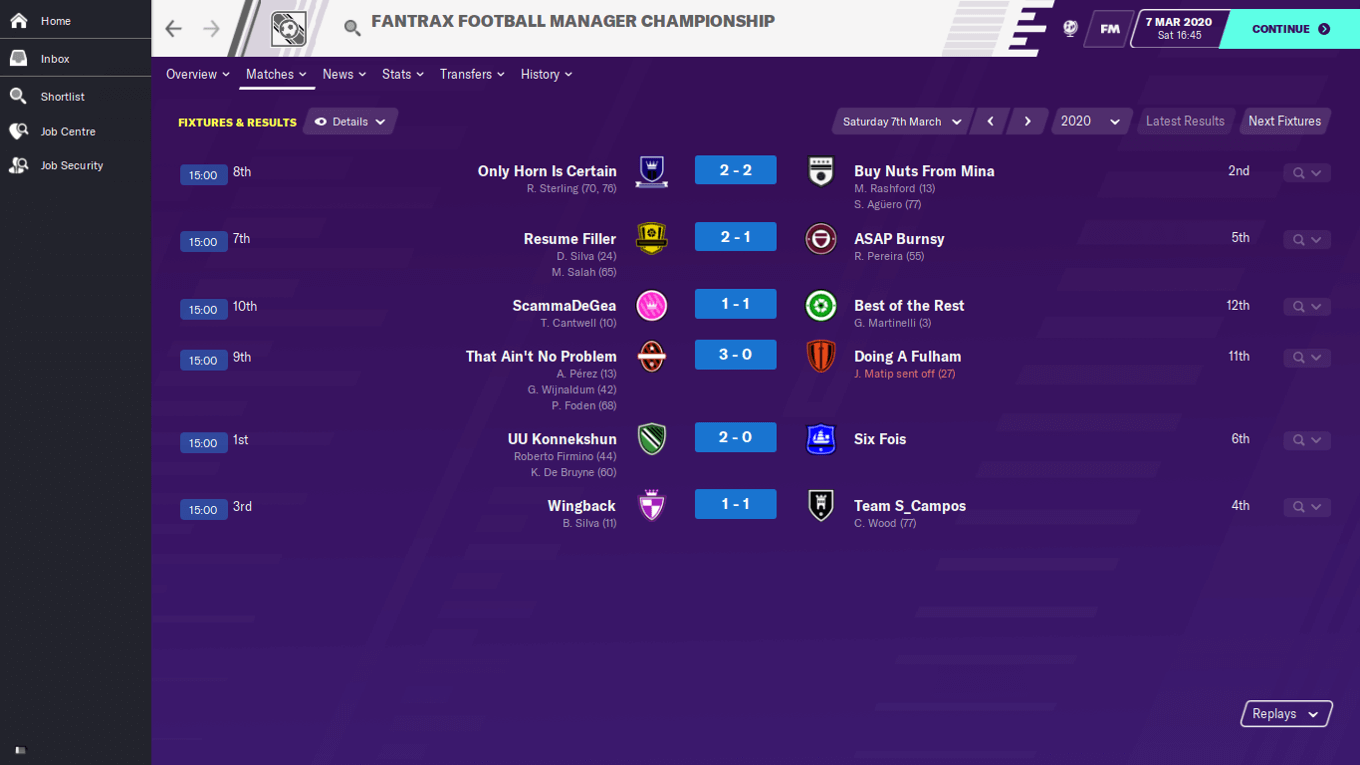 What a big win. Away at title rivals Wingback, KDB and Chilwell stepped up to give Konnekshun the three points and put one hand on the trophy. A late double from Aguero ensured that Buy Nuts will push them until at least Gameweek 21, whilst a 2-0 win for Burnsy will keep their name in the conversation too. There was late drama at the Doing Dome with Christian Benteke popping up in the 90th minute to grab the win for Doing A Fulham against 10-man Only Horn. Six Fois were without Ederson again, this time through injury, and it showed as they lost heavily to That Ain’t No Problem. 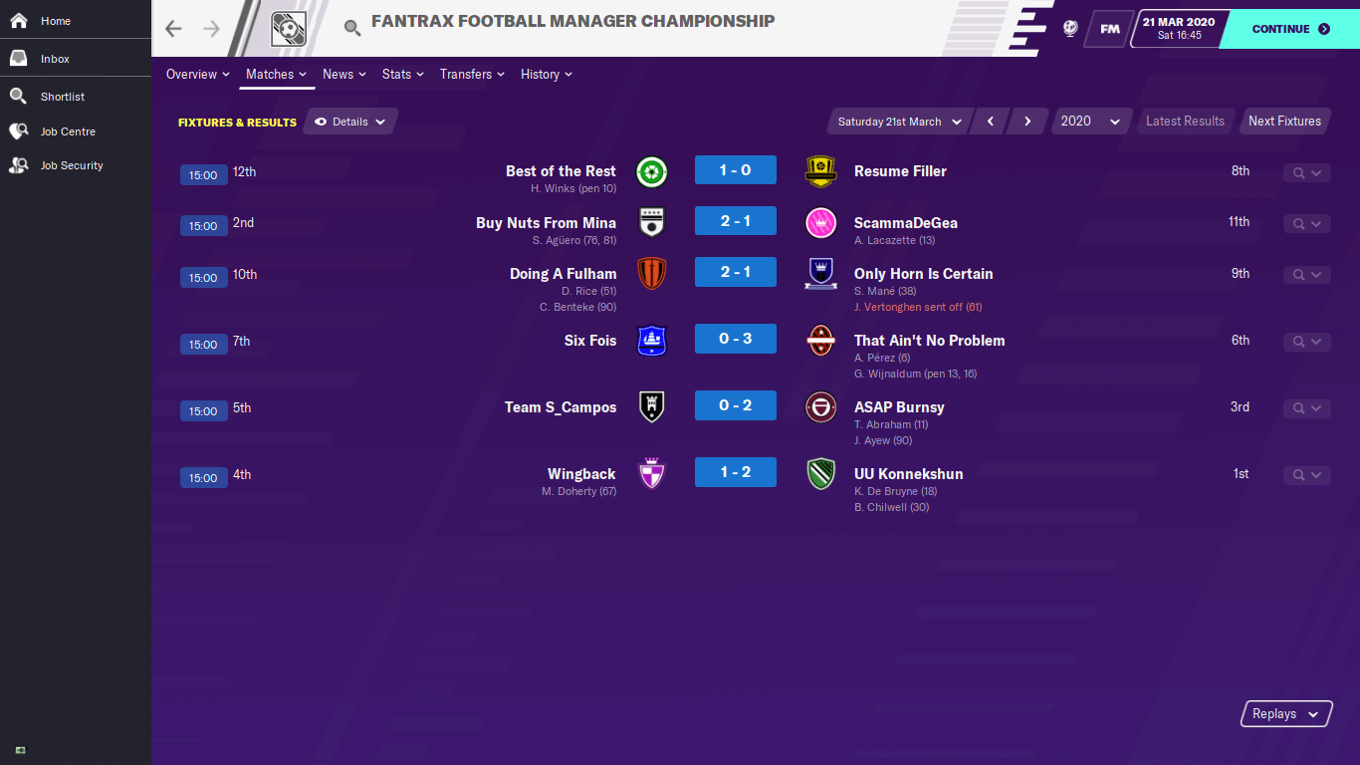 We’re almost there. Konnekshun needs three points from their final two games (home matches against That Ain’t No Problem and Campos) to secure the title, and that’s if Buy Nuts and Burnsy win their remaining games too. Wingback and Campos will be playing for pride, though they should both be proud of their seasons having been given pre-season title odds of 250-1 and 350-1, respectively. Best of the Rest can still humiliate someone if they avoid the wooden spoon – they are just two points behind Scamma, and four behind Doing A Fulham. The golden boat looks to be between Aguero (12 goals; Buy Nuts), Mane (12; Only Horn), and Chris Wood (11; Campos), whilst KDB (Konnekshun) looks a certainty for the player-of-the-year award, though Bilva (Wingback), Sterling (Only Horn), and Mane (Only Horn) have an outside chance. 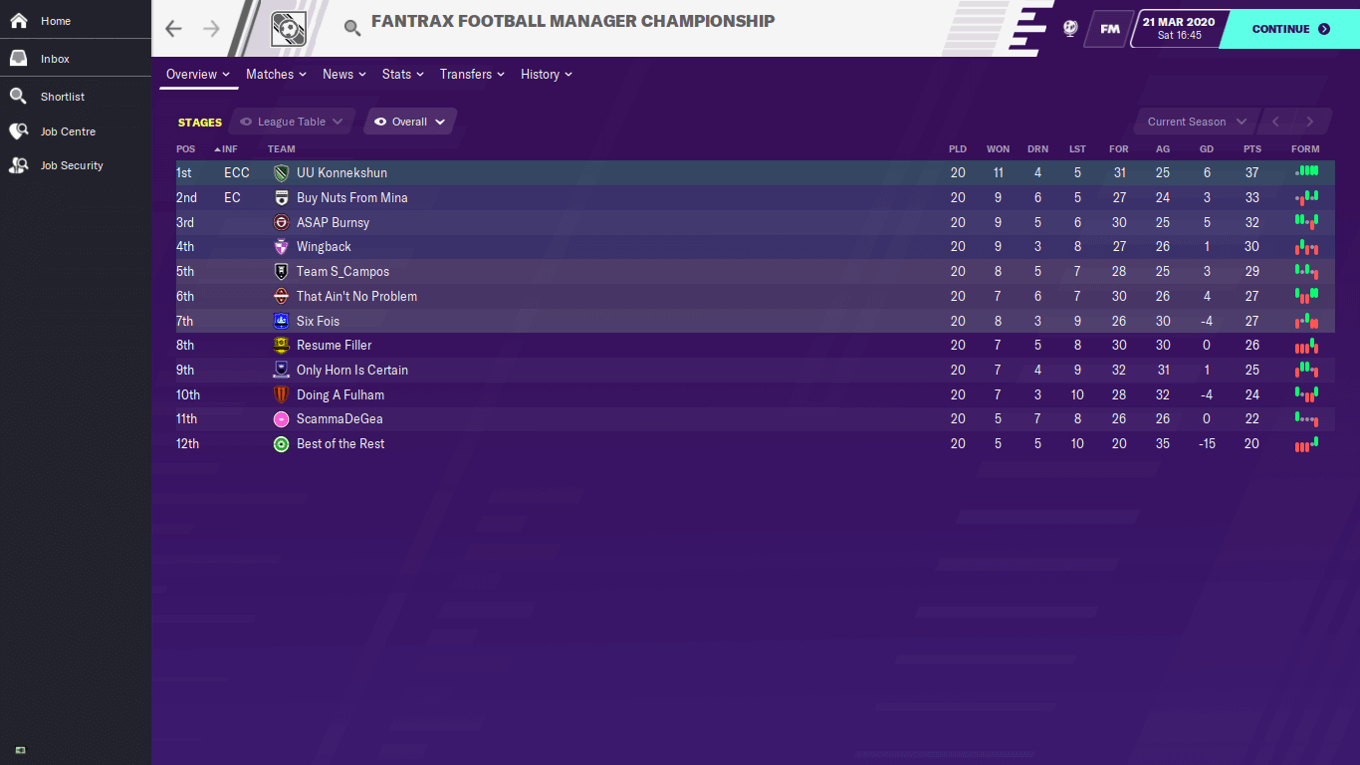 So that’s your lot for now. Come back tomorrow to see the final installment of Fantrax Does Football Manager with @TT_CAM!