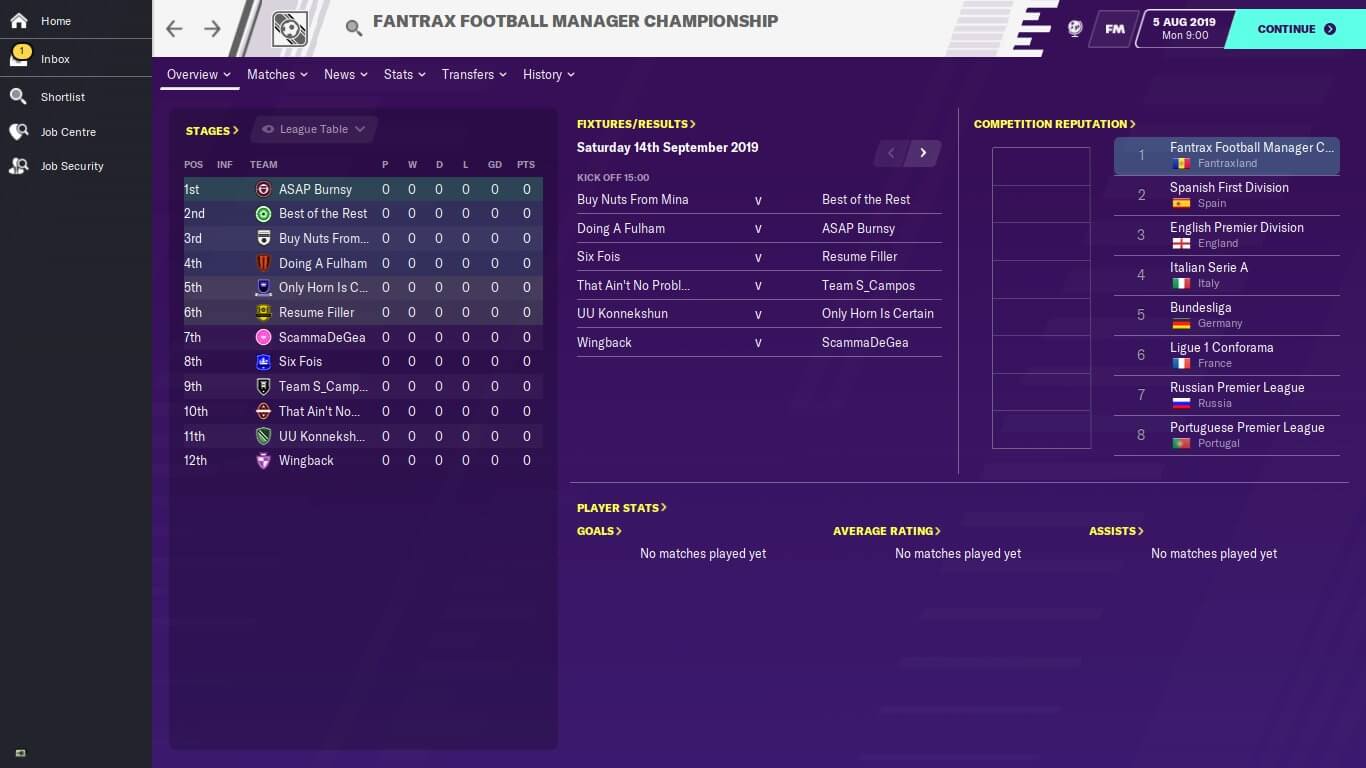 The Premier League may not be back until April 30th (yeah, right!), but we’re not going anywhere here at Fantrax. To give you your football fix, we’ll be doing something a little bit different, and something very cool and not in any way loser-ish. Yes, we will be simulating your Fantrax fantasy football league on Football Manager 20. We put out a call, and you responded, so each week one lucky league will get to see what would happen to their teams in the world’s greatest football game. First up, it’s @TT_CAM.

And So It Begins…

The league has been formed, the players have been added, and the fixtures have been set – all that’s left is the action on the pitch. The action being an AI-generated simulation of a football match using key highlights from the director camera with maximum speed between highlights all displayed on a 3D graphics engine, obviously. The reputable Fantrax Fanzine tipped Only Horn Is Certain for the title, just ahead of UU Konnekshun, with Six Fois, Resume Filler, and Buy Nuts From Mina also thought to be in with a chance. At the other end of the table, the wooden spoon race looked set to be between Doing A Fulham, ScammaDeGea, and Best of the Rest. But what do the bookies know ay? They once made Leicester City 5,000-1 shots to win the Premier League, so maybe there is hope for The Scammers.

Congratulations Oliver McBurnie and Buy Nuts From Mina! The first-ever goal in a Fantrax Football Manager Championship was scored by you! And if your career is illustrious as that of Brian Deane and Sheffield United, then boy do you have something to look forward to! Clean sheets led to three points for Burnsy and Campos, whilst Six Fois managed to hold on despite having John McGinn sent off just after the hour mark. A Mane hat-trick inspired Only Horn to a big away win over Konnekshun, and Bilva and Saint-Max gave Wingback a come-from-behind victory over Scamma. 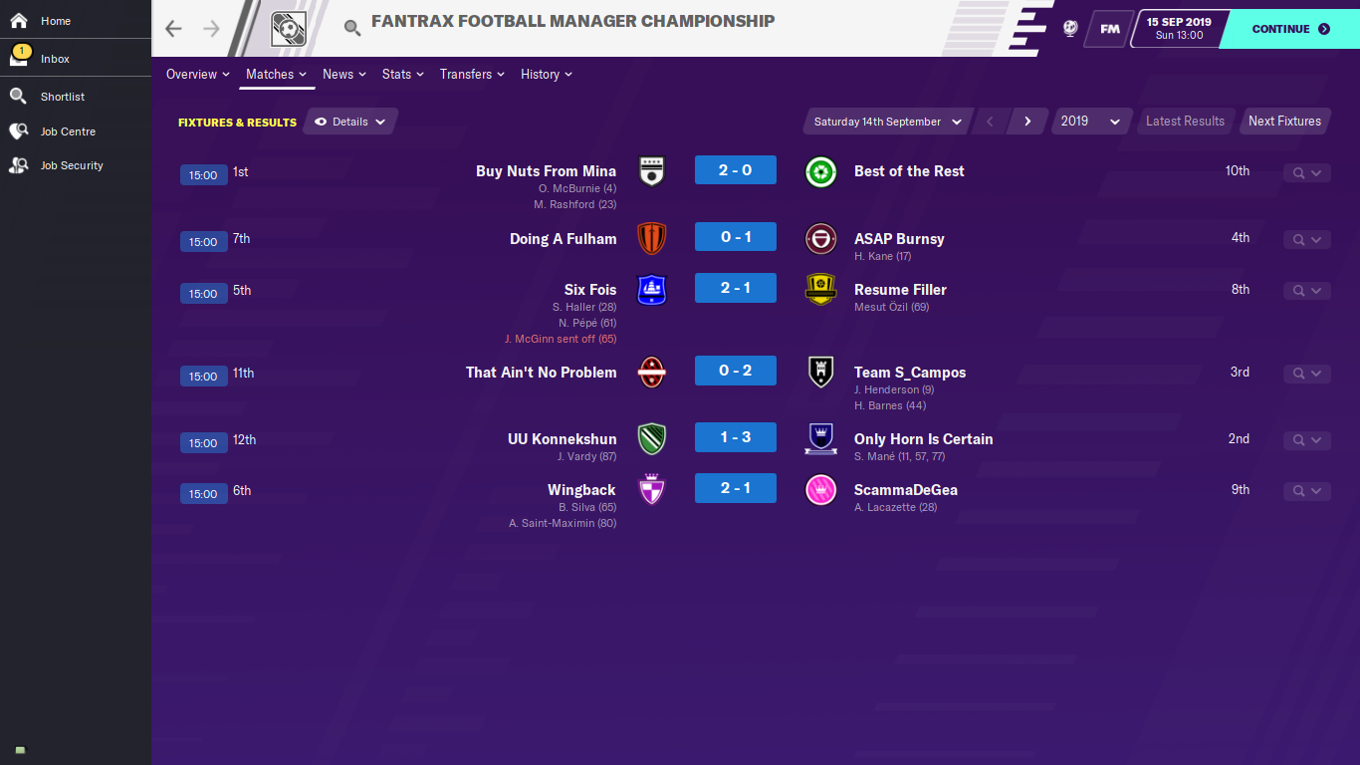 The big names turned up in Gameweek 2, with Aubameyang, Lacazette, Aguero, Firmino, Mane, Jesus, and John Fleck all getting on the scoresheets for their respective clubs. Another loss for pre-season title hopefuls Konnekshun left them as the early table proppers, whilst Wingback was handed the biggest loss in the long history of the Fantrax Football Manager Championship. Buy Nuts’ decision to play a 4-5-1 with Mount, McBurnie, and Daniel James as the midfield three has so far proven the doubters wrong as they won two from two. 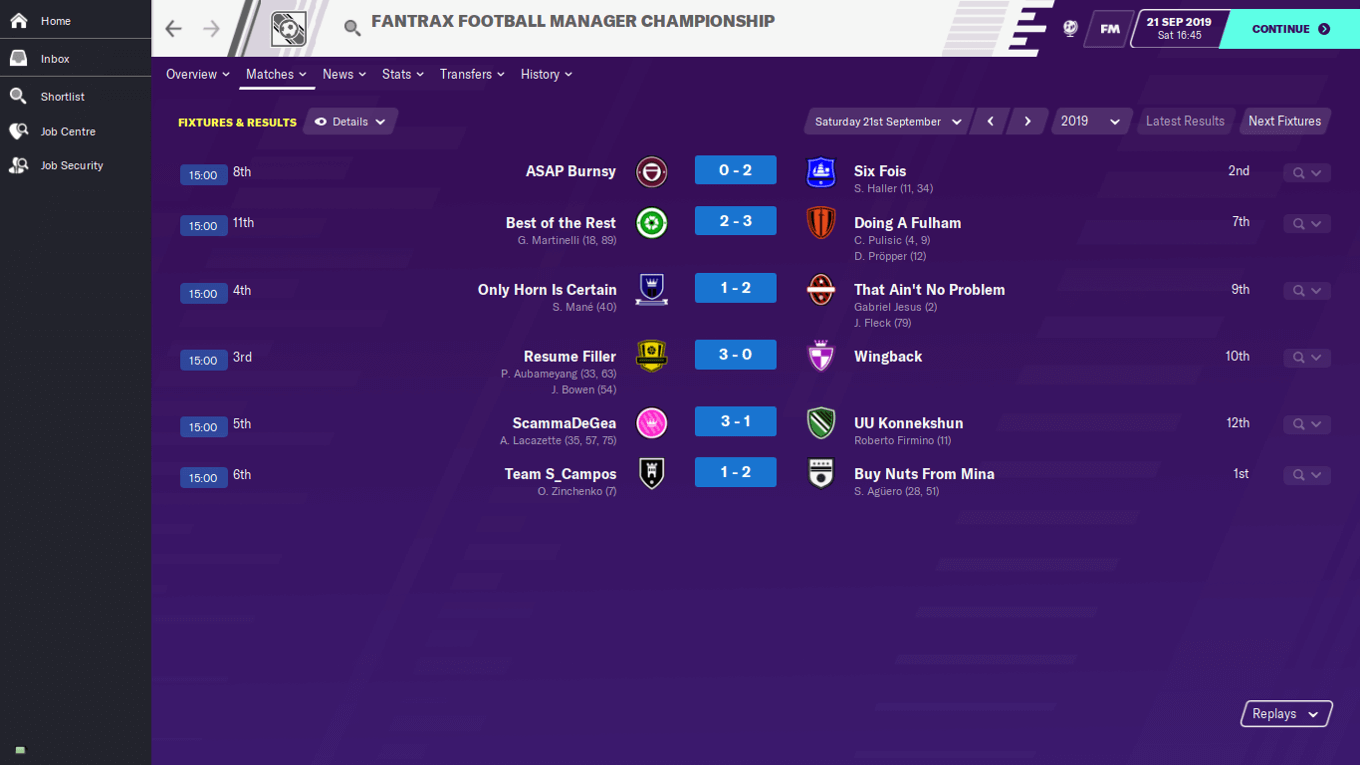 Six Fois suffered the ignominy of being the first side to drop points to Best of the Rest – a side put together to make up the numbers in this 11-team league. After starting this season with two good wins, this draw will be disappointing to the Fois faithful and already some are questioning the tactic of playing Reece James and TAA at center-back. Despite the draw, Best of the Rest remained the only team without a win, which should give some comfort to @TT_CAM and his league…can you imagine getting beat by a team of rejects?!? An extraordinary first half at the TANPro stadium saw five goals and a red card, but That Ain’t No Problem held on for the win, and even a Raul Jimenez double was not enough to stop Buy Nuts winning their third in a row. 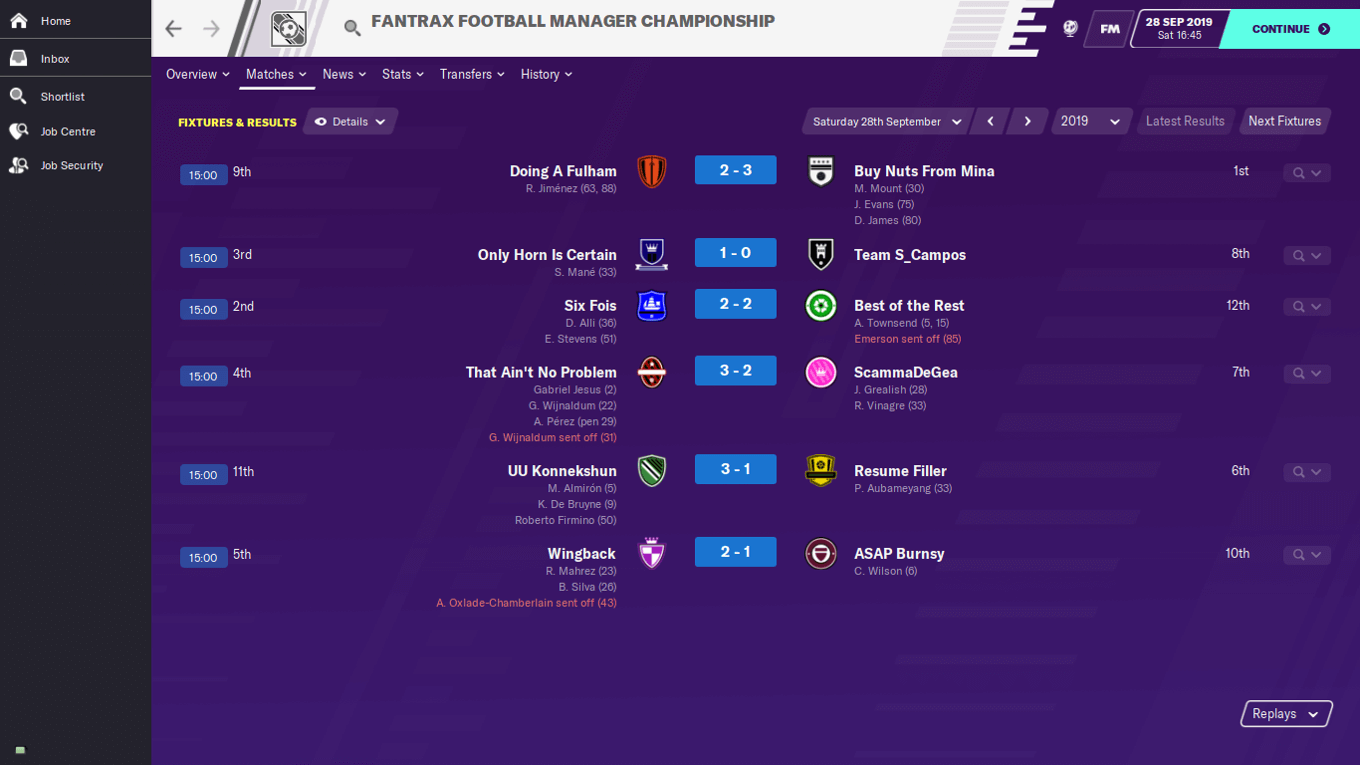 Gameweek 4 saw clean sheets become as rare as the sight of live sport on our TV screens, though to be fair, the league has been full of free-flowing, attacking football all season – anyone would think these managers heavily weight the attacking prowess of players when selecting them… Doing A Fulham got the better of an injury-ravaged Campos side. Campos is currently dealing with absences to five players and is resorting to filling their bench with greyed-out nobodies, similar to what Daniel Farke has been doing all season in real life. It was a weekend of late goals though, as Burnsy and Scamma turned losses into wins and That Ain’t No Problem managed to salvage a draw. 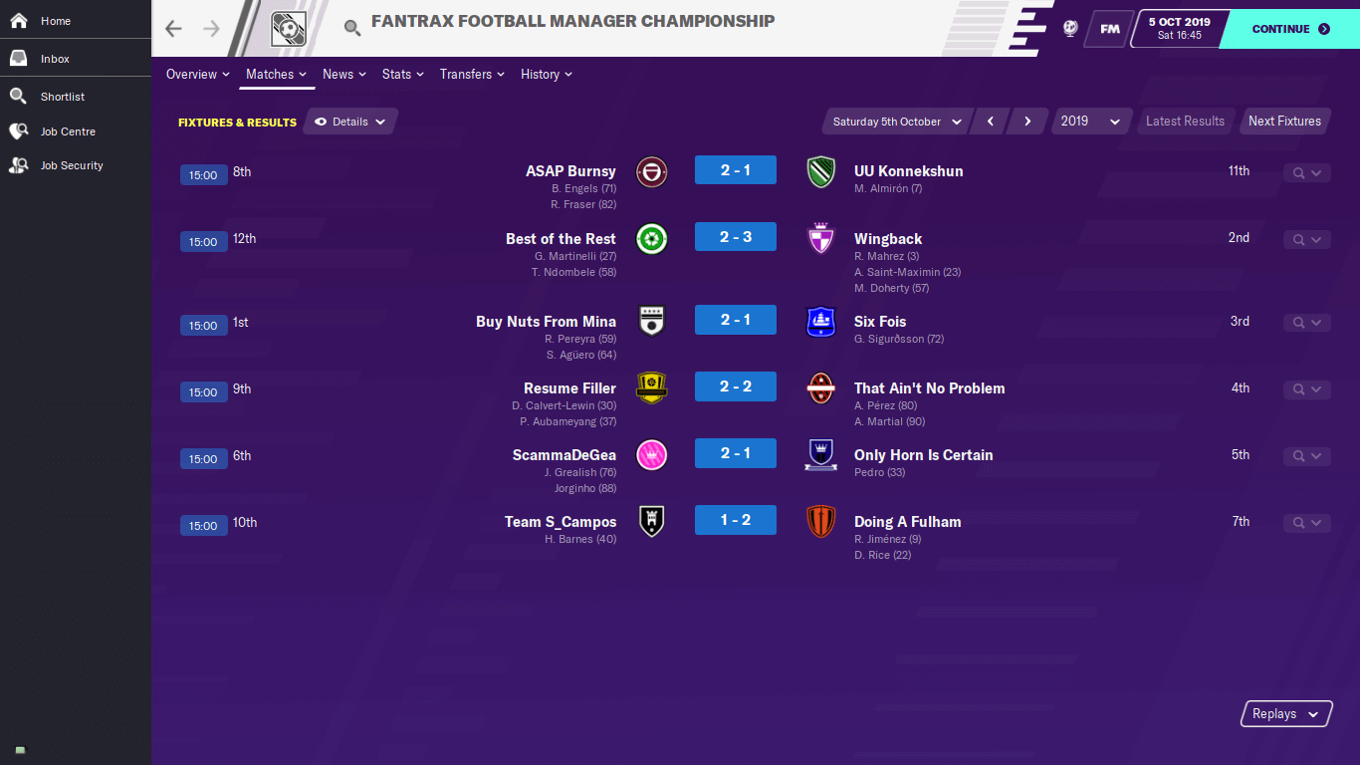 Wingback inflicted the first loss of the season on Buy Nuts, with Moutinho pulling the strings in a thoroughly deserved 2-0 victory. Milner’s sending off inspired Burnsy to fight back, but it wasn’t enough to overcome a King-Jesus combo for That Ain’t No Problem. Six Fois’ midfield (Pogba, Fernandes, Sigurdsson, Alli, Pepe…with Buendia on the bench) continued to overcome the frailties of a TAA-James center-back partnership. Scamma and Campos played out only the third draw of the season, but the best of the action was found at the OnlyArena as Resume Filler leapfrogged their hosts with goals from Aubameyang, Iwobi, and Salah. It’s early days but things are looking good for Buy Nuts and Wingback. Pre-season favorites Only Horn and Konnekshun sit on just 6 points from a possible 15, whist Best of the Rest continue to provide points for others in a manner that would make the 2008 Derby County side proud. In a league with KDB, Salah, Kane, and Grealish, it’s That Ain’t No Problem’s Ayoze Perez that leads the way on the individual front, with an average rating of 7.84. Perez has four assists already this season – the most in the league. On the goals front, Lacazette, Mane, and Aubameyang all have five from five – the same amount as the whole of the Campos team combined. 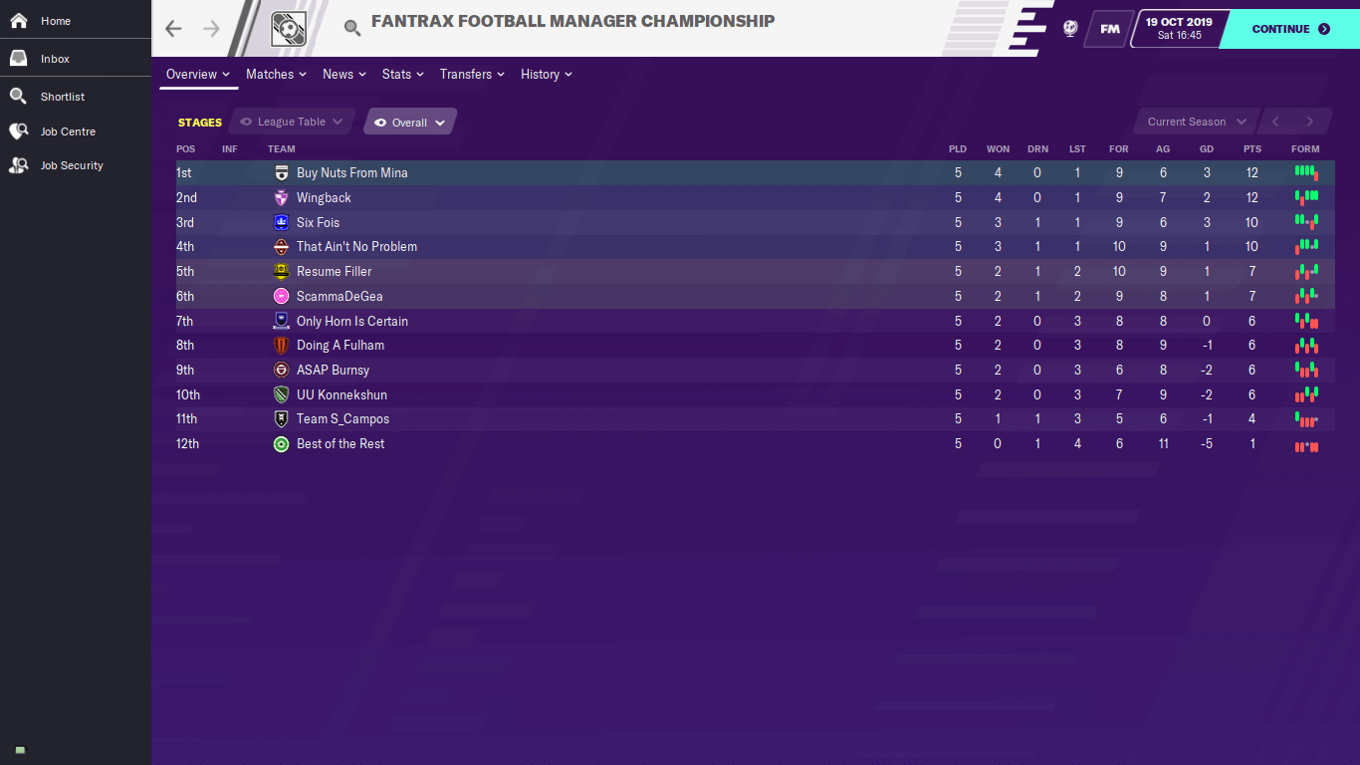 So that’s your lot for now. Come back tomorrow to see what happens in Gameweeks 6-10!