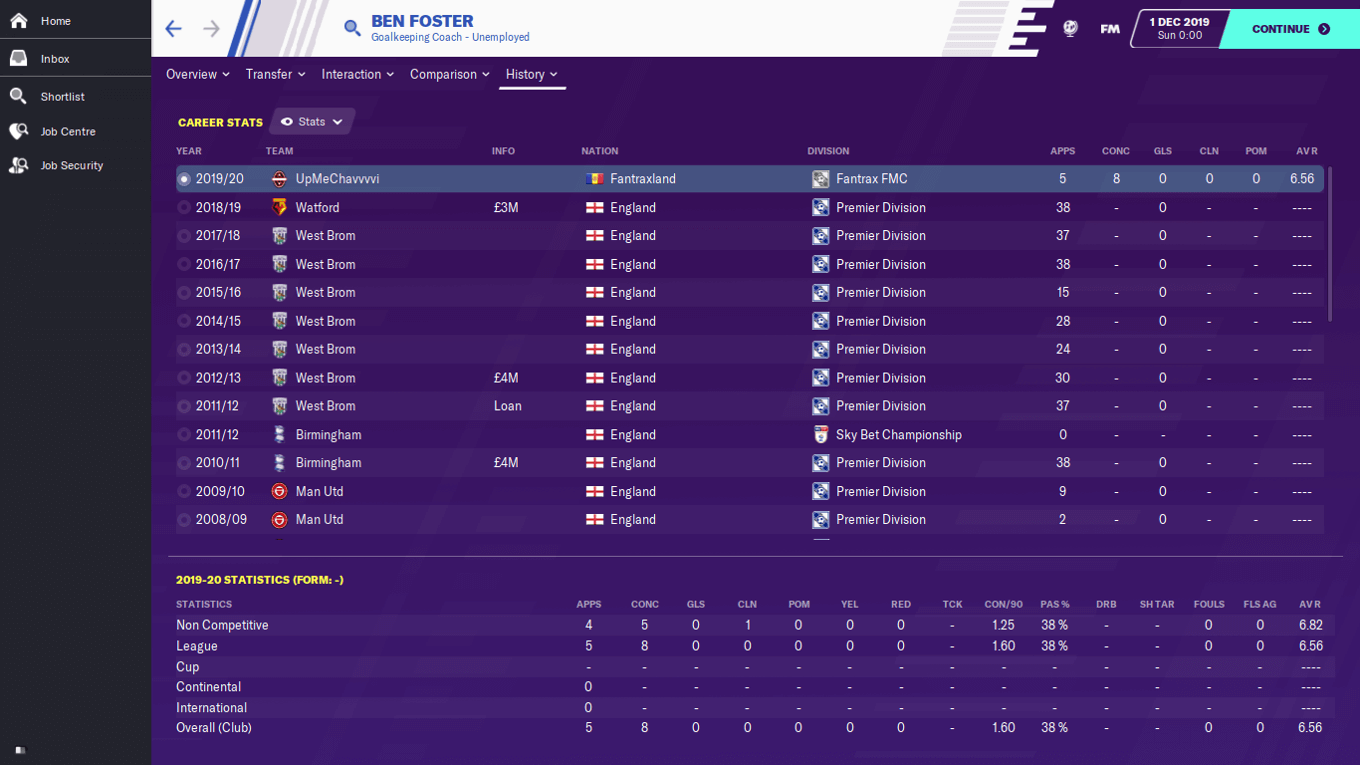 The Premier League may not be back until April 30th (yeah, right!), but we’re not going anywhere here at Fantrax. To give you your football fix, we’ll be doing something a little bit different, and something very cool and not in any way loser-ish. Yes, we will be simulating your Fantrax fantasy football league on Football Manager 20. We put out a call, and you responded, so each week one lucky league will get to see what would happen to their teams in the world’s greatest football game. First up we had @TT_CAM (check his series starter out here), now we have part 1 with @markflay. Enjoy!

And So It Begins…

The league has been formed, the players have been added, and the fixtures have been set – all that’s left is the action on the pitch. The action being an AI-generated simulation of a football match using key highlights from the director camera with maximum speed between highlights all displayed on a 3D graphics engine, obviously. The reputable Fantrax Fanzine tipped UpMeChavvvvi for the title, with Ramadan Rovers, We’ve Won It 6 Times, Bruno’s Squad, InterYaNan, and My Team Is Poop also thought to be in with a chance. At the other end of the table, the wooden spoon race looked set to be between Yankee Clippers (presumably because they are playing the wrong sports), The Vardy Boys, and Best of the Rest. But what do the bookies know ay? They once made Leicester City 5,000-1 shots to win the Premier League, so maybe there is hope for The Yankees.

The Table at Gameweek 10 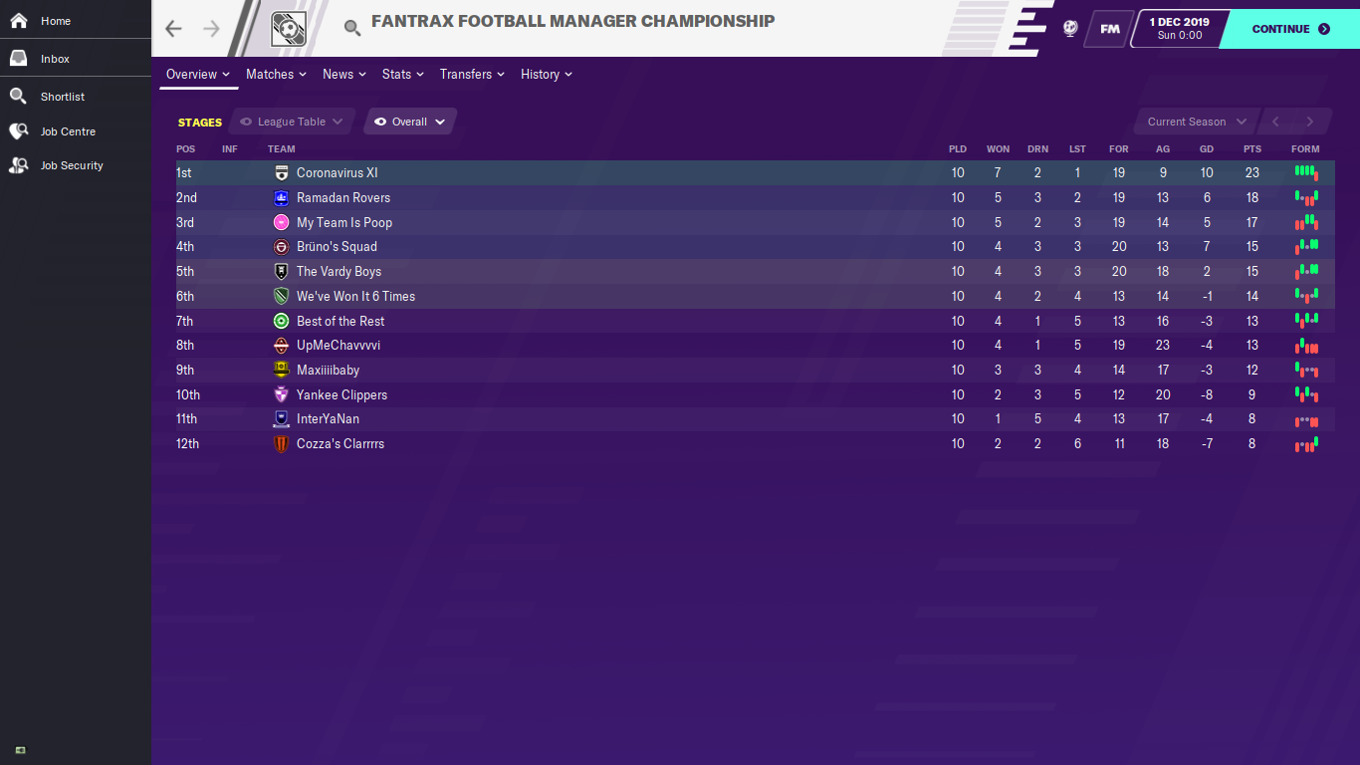 In a strange, but I guess apt tribute to the world in which we are now living, Coronavirus XI dominates the Fantrax Football Manager Championship after 10 games, leading as they do by 5 points. The team, led by Unai Emery and captained by Jonjo Shelvey (I know, crazy right?), have laid down the gauntlet on the back of a miserly defense which has conceded 4 fewer than any other team in the league. The club went unbeaten for the first 9 games but just lost to The Vardy Boys in a game in which Lacazette was sent off. The Frenchman temporarily joins Ozil on the sidelines (injured for 2-4 months) and it will be interesting to see if Corona will be able to maintain their great start without two of their highest performing players.

Ramadan Rovers are at the front of a congested chasing pack, with 5 wins, 3 draws, and 2 losses from their opening 10 games. The Rovers have been a three-man team so far this season, with Salah, Wijnaldum, and Laporte performing excellently, with not a whole lot of help from what is a good supporting cast (Rashford, Moutinho, Maguire, etc.). Salah’s 6 goals are the second-most in the league, and they are needed because probably the only weakness in this starting 11 is the lack of a “proper” forward. At the moment, Giroud is doing an okay job, but will that be enough to win them a league title?

In third is My Team Is Poop, who have so far been anything but that. Sergio Aguero can take a chunk of the credit for this. The main man leads the scoring charts with 8 goals in 10 games, and an absurd 7.87 average rating. Kane is also having a very good season despite being played out wide on the left (it appears the AI is not a fan of two up top) whilst van Dijk is bossing things at the back, as expected. One sour note for the club is the recent injury to Guilbert who had been ever-present at right back. Damaged knee ligaments have ended his season and at the moment it appears that Ward-Prowse will be moved back and a Harvey Barnes-John McGinn combo will be tasked with controlling the midfield.

Brüno’s “Squad” is more like a midfield plus spare parts. But that midfield might lead them to glory. Bruno Fernandes, Pogba, David Silva (5 goals, 3 assists, 7.39 average rating!!), Mahrez, Willian, Mount, McTominay…fitting them all in is going to be the issue. Well, that and the defence that consists of Tarkowski and Dunk in the centre (good in Fantrax, not good in FM!). The team started slow, winning just once in their opening six, but they are now unbeaten in four, and are coming off the back of a 3-0 win over Cozza’s Clarrrrs and a 5-0 win over Yankee Clippers.

Like Brüno’s, The Vardy Boys have seen an uptick in form after a shaky start. Four weeks ago they were down in 10th place, but 10 points from a possible 12 have seen them climb into contention. Captained by Phil Bardsley (seriously, every club’s captain seems to be a bang-average British player…), the team have scored the joint-most goals this season, yet their top scorers – Vardy and DCL – have just 4 apiece. DCL, by the way, is playing centre-mid alongside Fleck. It’s a strange one, but with the balance of this squad, there’s probably not a better alternative. Reece James has been the best player so far (7.15 rating), but I can’t see him keeping this club where they are; my money is on a bottom half finish for The Vardy Boys.

It’s a little surprising to see WWI6T in mid-table, given their strong and balanced squad. TAA, Walker, and Rudiger at the back; Fabinho, Henderson, and Lo Celso in midfield (yes, Lo Celso is better on FM than in real life), and Firmino, Jesus, and Pepe up top (yes, Pepe is better on FM than in real life). Unfortunately, not all of them are performing. All of the Liverpool lot are – no surprises there I guess – but the others have been a little disappointing, and Jesus has 0 goals and 1 assist in 10 games…that needs to change big time if WWI6T are to challenge further up the table.

Mark Flay’s league is an 11-team one, so to make the FM simulation easier to run, a Best of the Rest club was created, and as of right now, this team of rejects is sitting above a fair few teams. I don’t want to say that this is embarrassing for those below, but… Anyway, Fabianski has been the main man for this band of misfits, and he’s helped secure wins over Yankees Clippers, Cozza’s Clarrrrs, WWI6T, and My Team Is Poop. Up next is league leaders Corona…can they cause another upset?

Ben Foster, what happened? Were you not enjoying the Andorran sun? You have torn this team apart. I can place transfer embargos on clubs to stop players being sold, but I can’t stop the AI if it decides a player wants to retire! And mid-season too. Say goodbye to any glory UpMeChavvvvi, and say hello to the wooden spoon, because you’ll be playing the rest of the season with a greyed-out nobody in goal. Sorry. It wasn’t looking too bad a few weeks ago too, as the club reached 3rd in the league at one point. They are really going to be relying on Raheem Sterling to save their season now – the winger somehow has a 7.50 average rating despite not scoring and only assisting once!

Like Jack Grealish’s weekend, it all started so well for Maxiiiibaby but has now become a nightmare. Just 1 win from their last 8 games has seen them slide all the way down to 9th; not good enough considering the talent at their disposal (Aubameyang, Son, Azpilicueta, Marcos Alonso, Kante, Tielemans, Mendy, and Saint-Max, to name a few). The club took the controversial decision to hire an Andorran nobody as manager; he’s been one of the few to deviate from the favored 4-5-1 of FM20, and the results have not been great. A couple of big games are on the horizon as they take on 11th placed Inter and 12th placed Cozza’s next – whether the club are set for a wooden spoon scrap should be much clearer after those matches.

Another underperforming team is the Pochettino-led Yankee Clippers. Despite having the likes of Alisson, Bilva, Aurier, Chilwell, Maddison, Buendia, and Bergwijn, the team has won just twice all year, and those came against the two sides below them in the league. Not-so-fun fact for the team: Alisson has an average rating of 6.41…yikes. Bilva’s sending off in their last game – a 5-0 hammering by Brüno’s – means they will be without their only player averaging above 7 for their next three games. With Chilwell and Maddison also nursing slight knocks, it may get worse before it gets better for the Yankees.

Having two goalkeepers leaves the bench looking a bit thin. Even thinner when long-term absentee Leroy Sane is one of the squad members. And thinner still when Matt Doherty picks up a big injury on the opening day which has cost him most of the season. At least star man Mane isn’t injured….oh, wait. To be fair, the Senegalese forward with a 7.37 average rating will probably only end up missing two or three games, but when you’re in a wooden spoon dogfight, these things will hurt. When everyone is healthy, this team will be alright. It’s a little unbalanced but it has enough quality (Sigurdsson and Alli are having decent seasons) to see it to mid-table safety.

Well, Cozza’s last game was certainly eventful. A 4-2 win where Pedro (2 days), De Bruyne (4-6 weeks), and Norwood (3-4 months) were all injured. Norwood (club captain, obviously) hasn’t started all season, and Pedro won’t miss any games, but it’s that loss of KDB that will hurt. He has, of course, been the club’s best player with a 7.16 average rating, though as the best player in the league, this should probably be higher, and it explains why the club sit where they do. Oh, that and the zero clean sheets in 10 games. This isn’t a bad defense though (Matip, AWB, Cancelo, Soyuncu), nor a bad squad in general (Grealish and Raul Jimenez are amongst it), so even with the loss of KDB, I don’t see Cozza’s staying at the foot of the table for too long. 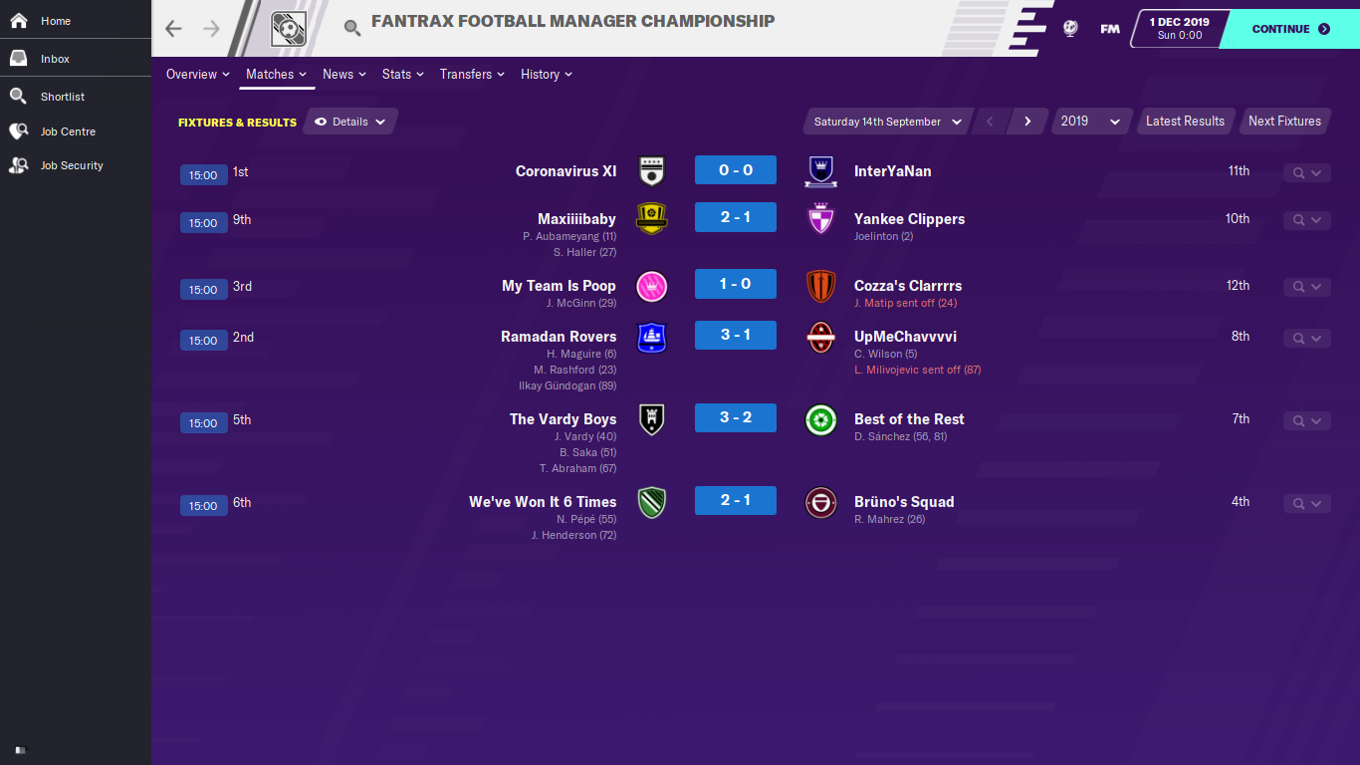 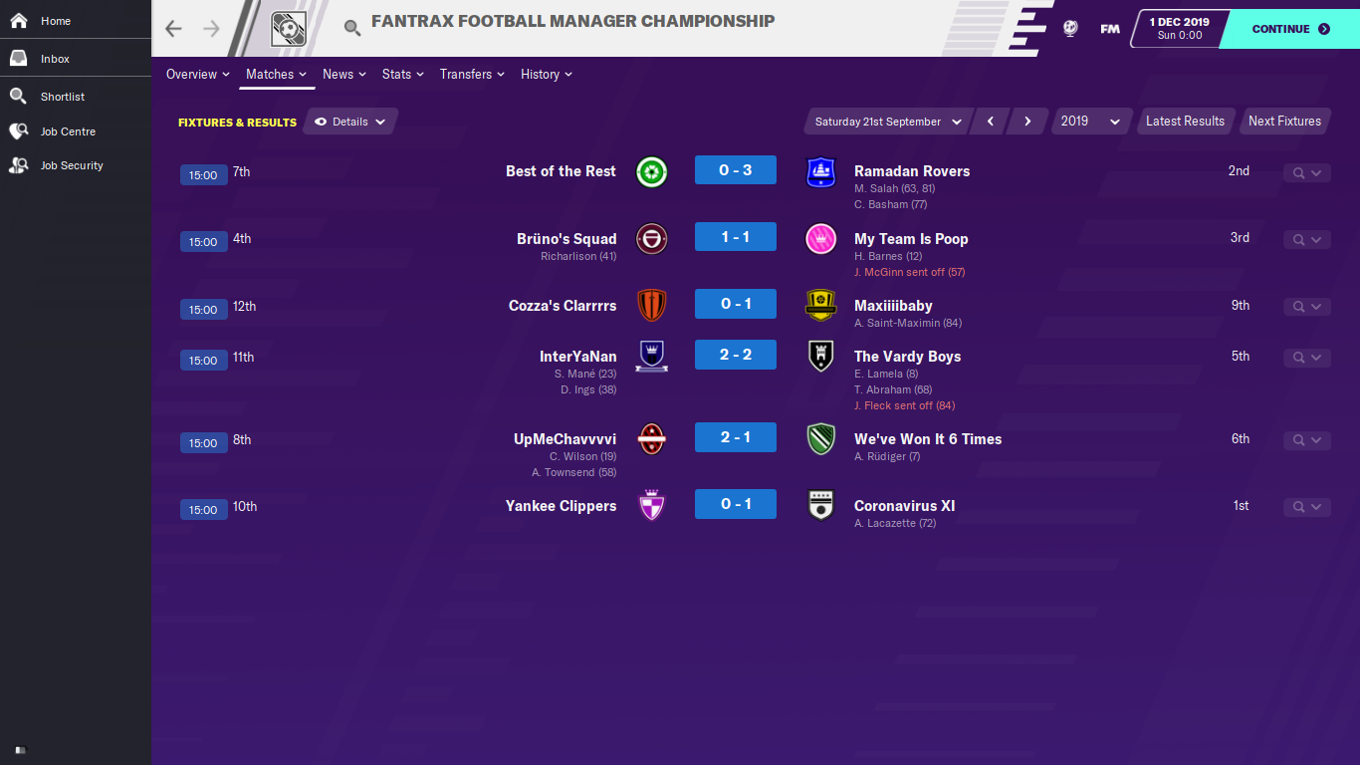 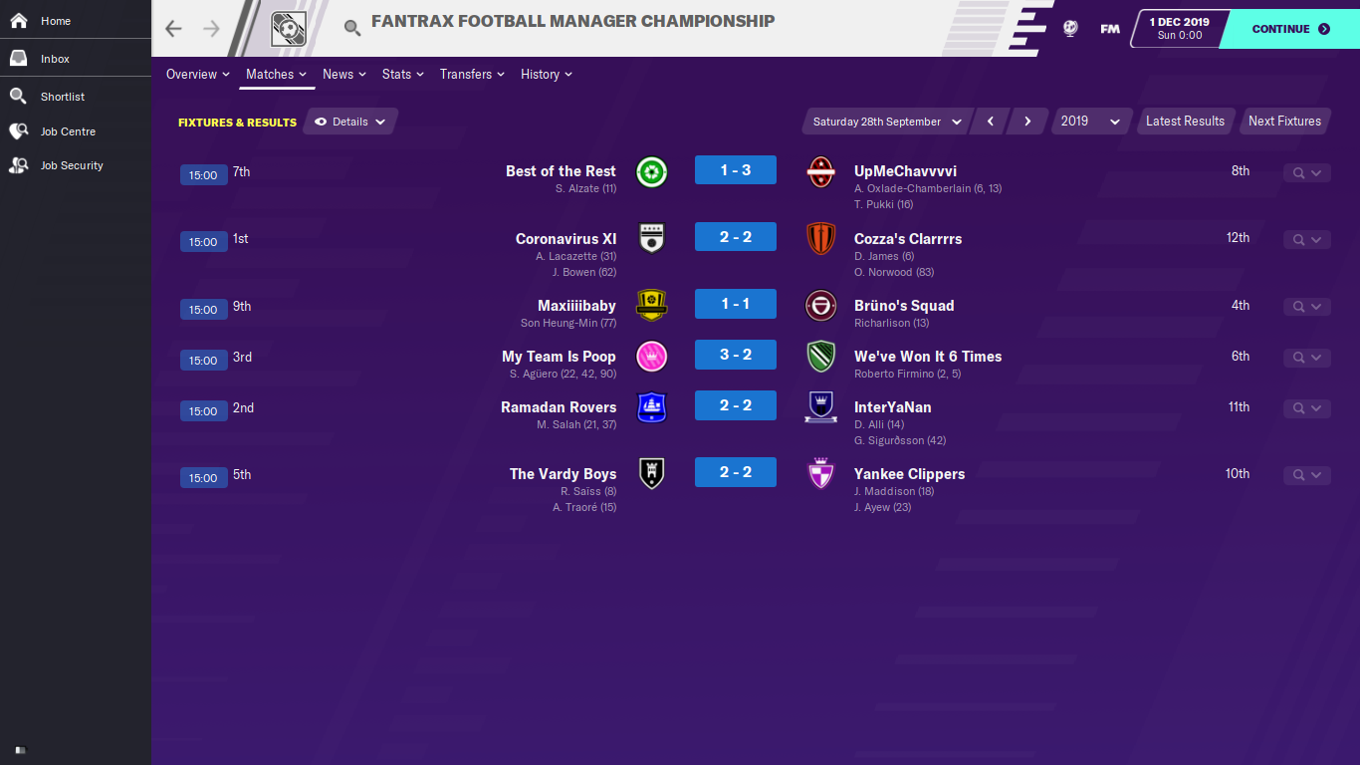 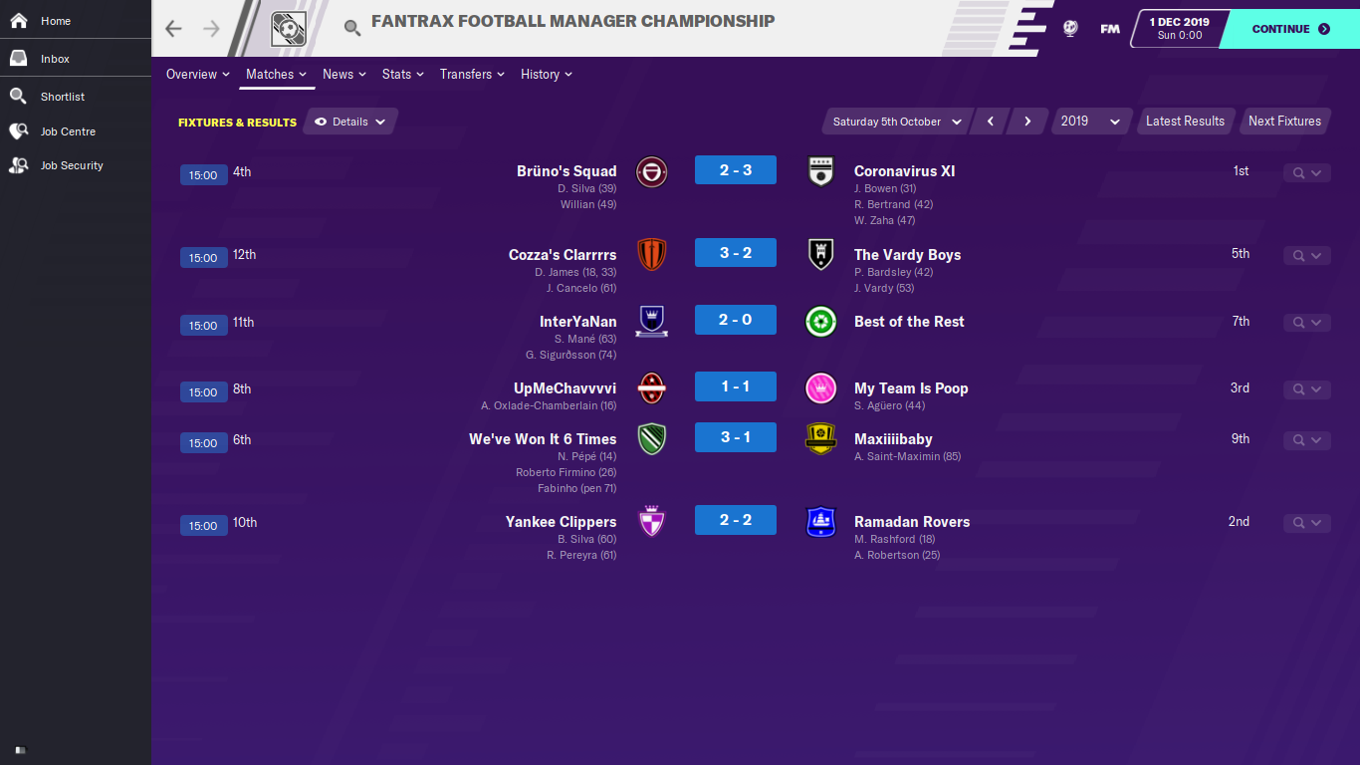 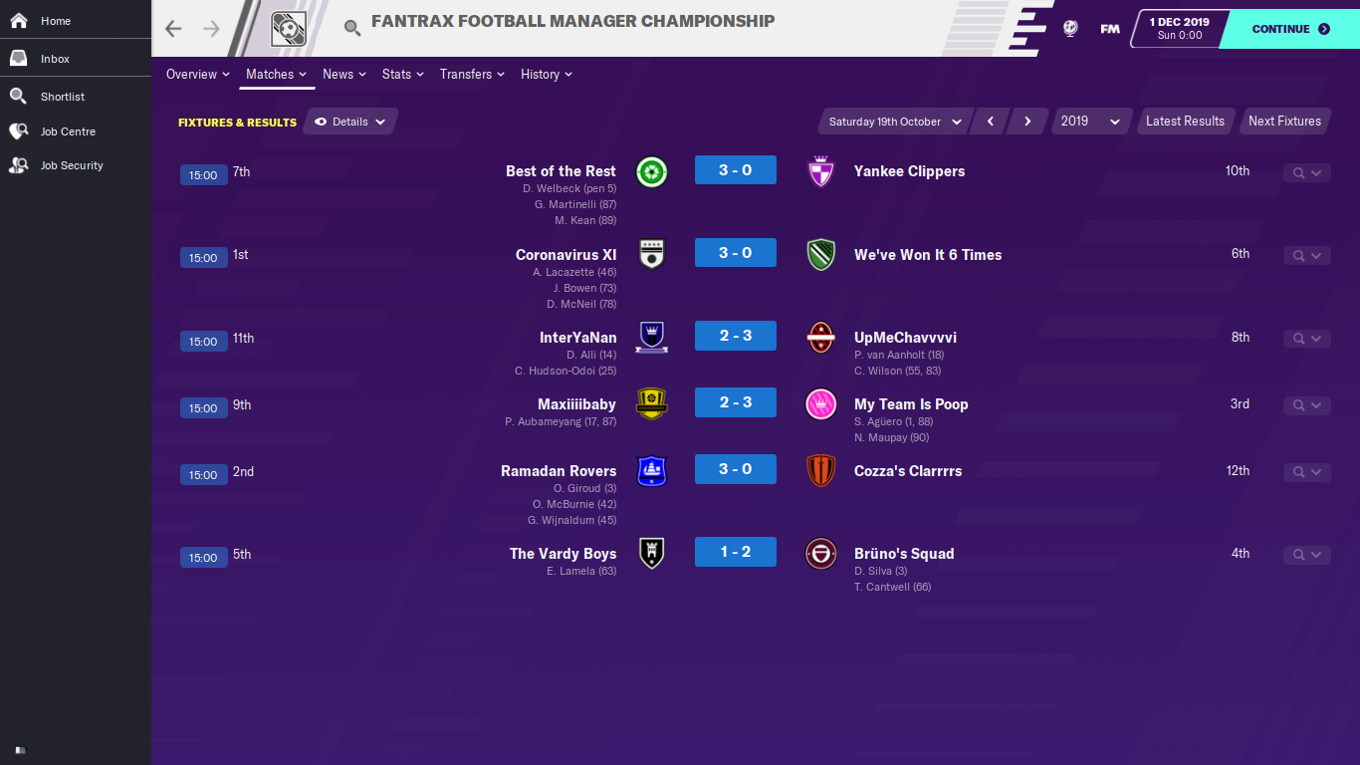 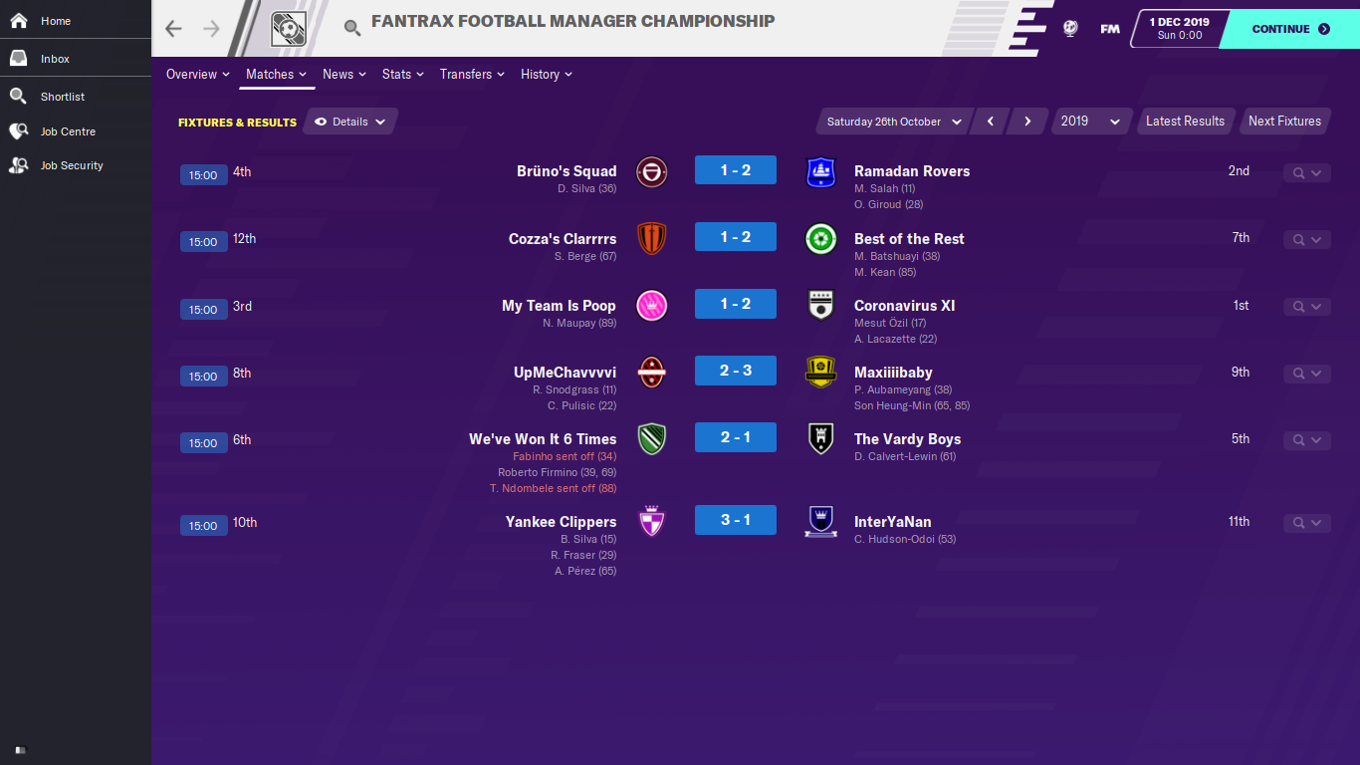 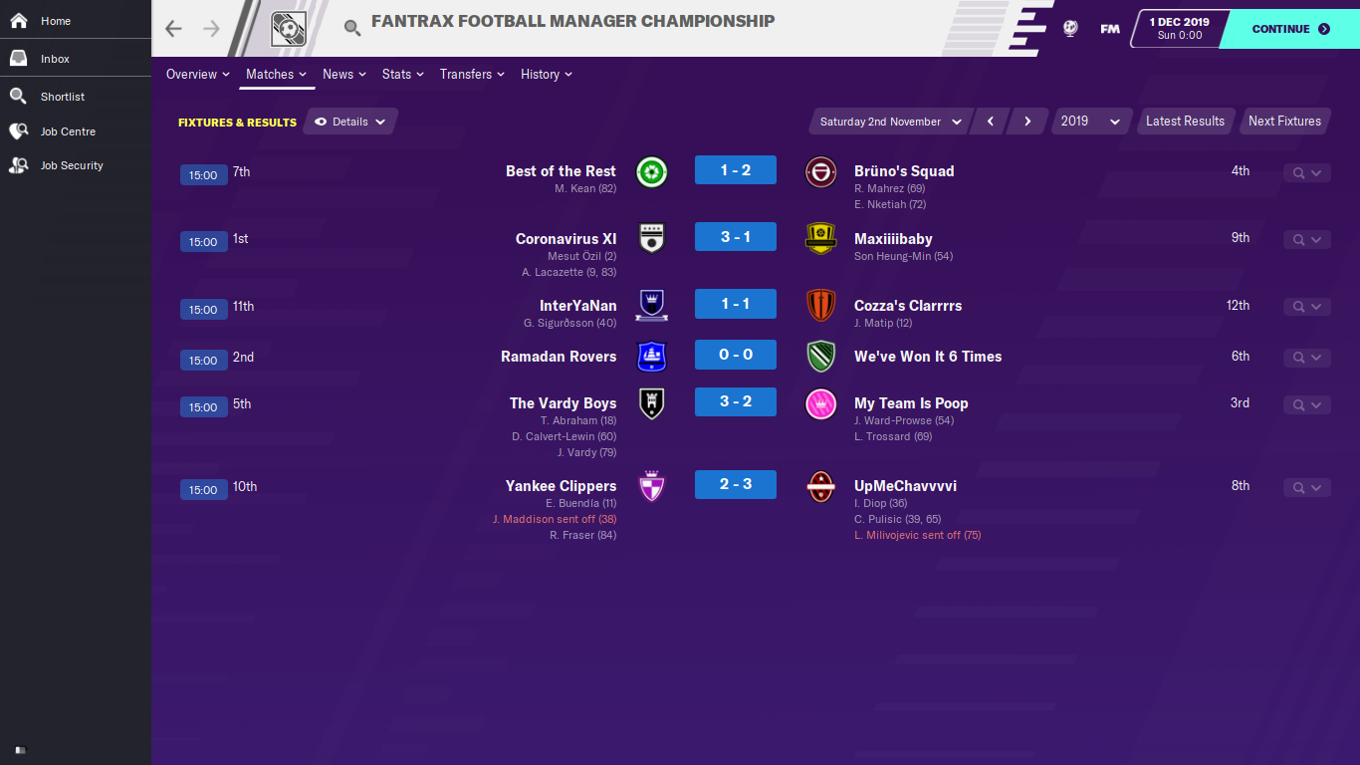 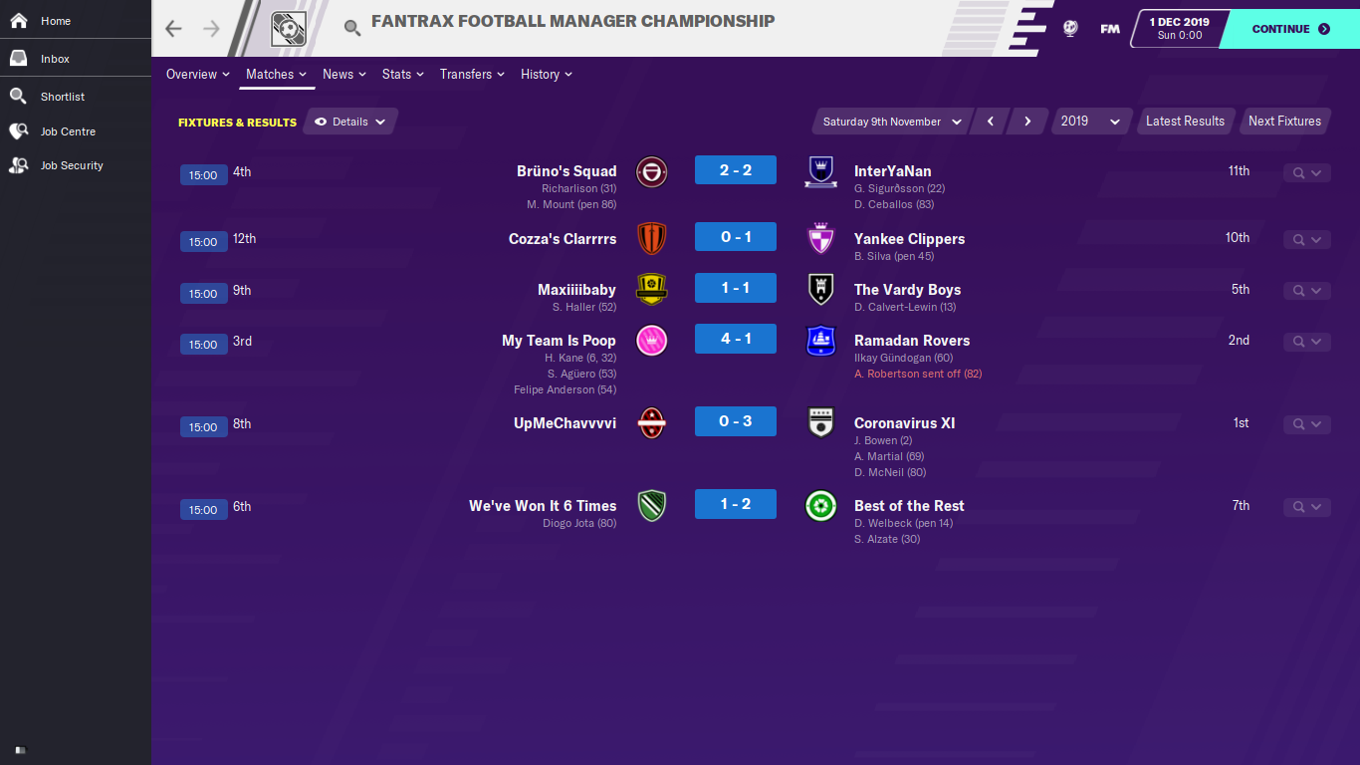 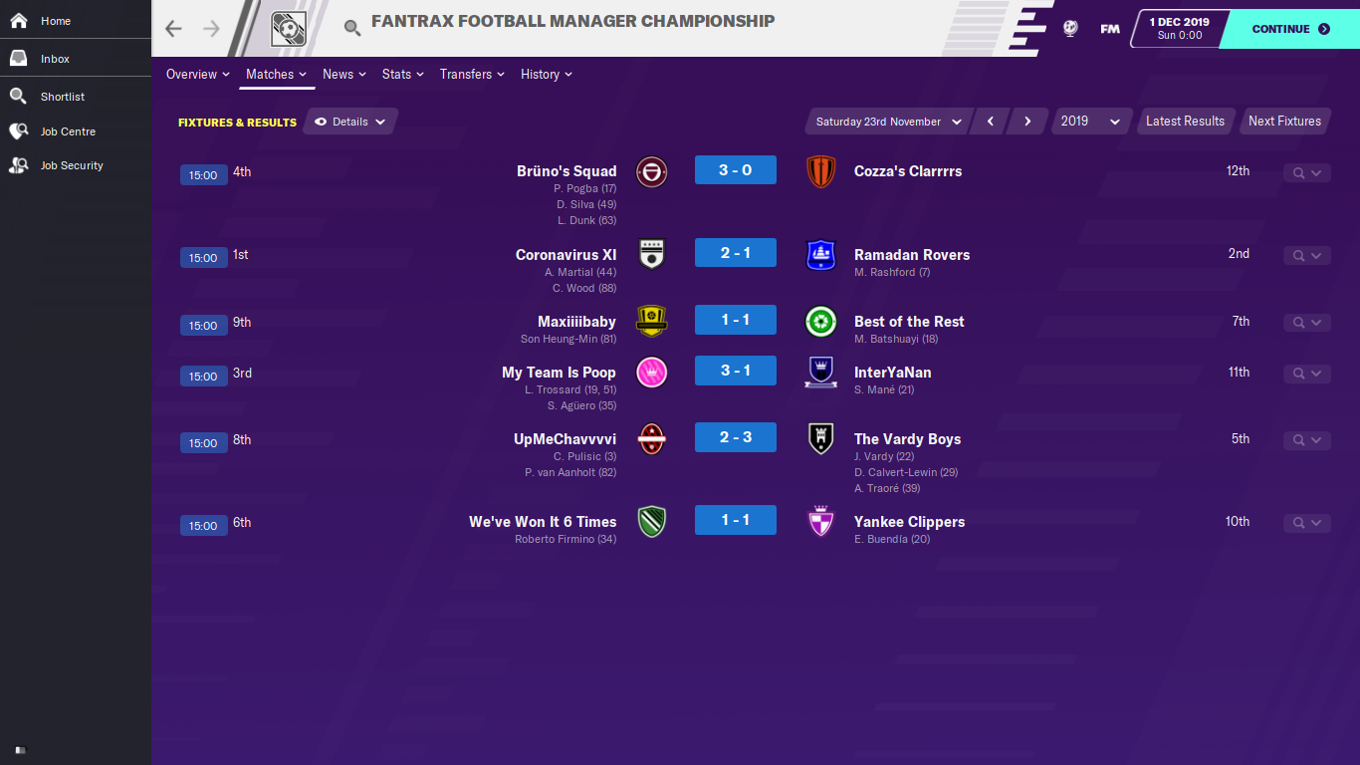 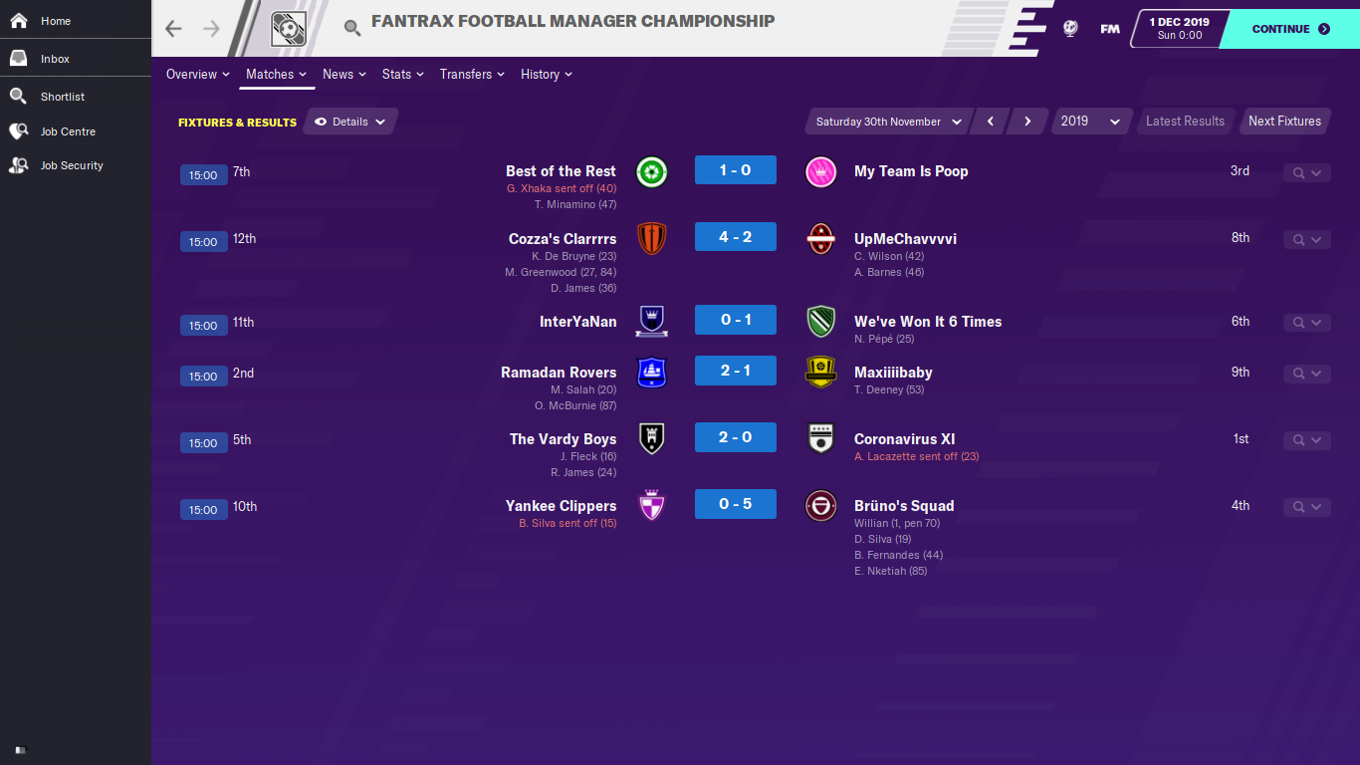