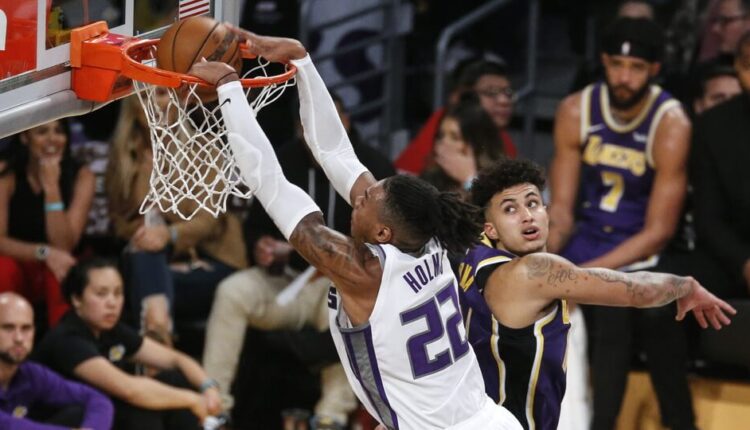 We’re back at it with more trade targets to consider! With Week 7 upon us, we are here to help you target key players to trade in your fantasy basketball league. Like any good stock trader, the best time to sell is when the value of a commodity is high. Inversely, the best time to buy is when a commodity value is low.

Our key trade targets take into consideration those players that have moved significantly in value against their average draft position (ADP) after the first six weeks of the NBA season.

Brogdon has been fantastic this year. He is averaging 19.4 points, 4.9 rebounds, 7.9 assists, 0.9 steals with 1.4 three pointers per game. His playmaking under coach Nate McMillan has been the highlight of this season. Brogdon currently sits in the top 10 in the league in assists. Jeremy Lamb has also been having a career yea. He is averaging 17.1 points, 5.6 rebounds, 2.9 points, 1.0 steal and 0.7 blocks.

Unfortunately for Brogdon and Lamb though, Victor Oladipo is due to return soon. Additionally, there has been some strong rumors of the Pacers interested in DeMar DeRozan. With Oladipo back and the potential for DeRozan to join the Pacers, Brogdon and Lamb’s value will not be any higher than now.

With Marvin Bagley back soon, it’s time to move on either Bjelica or Holmes. Holmes has been excellent since being inserted in the starting lineup. However, I believe Bjelica is likely to see his minutes, and value, hold a little better than Holmes’ current ranking. This is due to Bjelica’s ability to stretch the floor with his three-point shooting.

The Kings have been open about making De’Aaron Fox and Bagley the future of the Kings. Bagley has been going through on-court activities this week. He is likely to return later this week, after six weeks on the sidelines.

Holmes and Bjelica are role players. If you can get some good value now, they are great Week 7 trade targets.

With D’Aaron Fox likely an additional 2-3 weeks away, now is the time to sell high on Bogdanovic. While D’Aaron Fox was in the Kings lineup, Bogdanovic was limited to 24 minutes per game. Since Fox got injured, his minutes are up over 30 per game.

Coach Luke Walton will have a challenge on his hands with the distribution of minutes when Fox and Bagley are back. If you can get good value for Bogdanovic now, you will be better placed in the long term.

Fournier is in his eighth NBA season and is playing better than ever. He has carried his form from the World Cup into the NBA season. He is averaging a career-best 19.2 points per game. The major change to his game this year has been his efficiency. He is shooting 42.6% from the three-point land 47.7% from the field.