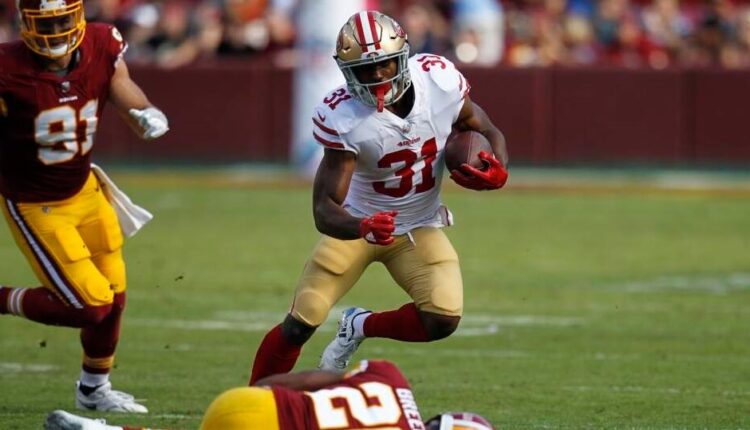 While the waiver wire isn’t as important now as it was during the bye weeks, this time of the year is more important than ever. Many of you are either in your playoffs or battling to get in, so we’re definitely going to have a more short-term outlook from here on out. With that in mind, let’s get into this Week 14 Waiver Wire.

If you have any questions or comments, reach me on Twitter @Bartilottajoel

Mostert is coming off the best game of his career and it’s quietly been a great year for this talented back. In that Week 13 defeat, Mostert led the Niners with 19 carries for 146 yards and a TD. Most importantly, Tevin Coleman had just five carries for six yards. Mostert also played 42 snaps to Coleman’s 10 and it’s becoming clear that they want to lean on Mostert more with Coleman struggling. What makes that even less surprising is the fact that Coleman has 99 rushing yards on 49 carries over the last five games while Mostert owns the best rushing average in the NFL among RBs at 5.9 yards per carry. Talent will always prevail and that definitely appears to be the case here.

Snell is another guy who’s found himself as the bell-cow back for his club and it’s strange to see his ownership remain so low. Not only is James Conner injured, but Jaylen Samuels has also turned strictly into a passing-down back. That’s clear when you see that Samuels has just 14 combined carries over the last three games while Snell has at least 17 carries in three of his last four fixtures. In those three games, Snell has 236 combined rushing yards and one touchdown. That’s huge from a guy below 50 percent ownership and we have to keep riding him until Conner returns. The Steelers schedule is nice too, facing the Cardinals and Jets over the next three games.

Don’t look now but Beasley is a Top-25 wide receiver. That really shocked me when I saw it but it’s really no surprise when you look at his consistency. Not only does Beasley have 55 catches for 635 yards and five TDs on the year, but he also has 79 total targets. Those are all rare feats from a player who’s widely available and he’s definitely hard to overlook in PPR leagues. The only real concern is the schedule, with the Bills facing the Ravens, Steelers, and Patriots over the next three weeks but that could force the Bills to throw more than usual.

With Eric Ebron out for the season and T.Y. Hilton seemingly injured every week, Doyle has established himself as the go-to guy for Jacoby Brissett. In fact, Doyle led the way with six catches for 73 yards and a TD on a team-high 11 targets in Week 13. Any tight end getting double-digit targets is definitely in consideration and it should definitely continue with so many weapons missing in Indianapolis. What we also like is that Doyle has established himself as the red-zone target for the Colts, catching a touchdown in three of his last four games.

This is going to be the most important part of this article over the next three weeks. Streaming the right defense can be the difference between a fantasy championship and heartbreak, so hopefully, we have some great plays for you here!

The Packers have established themselves as a much-improved defense this year and we absolutely love them against a team like Washington. Let’s start with that matchup, as the Redskins sit dead-last in both points scored and total yardage over their last 10 games. In fact, they’re averaging fewer than 13 points per game in that span. That’s truly horrific and it’s really no surprise when you see that Dwayne Haskins is their starting quarterback with very few playmakers on the offense.

That doesn’t even take into consideration that they allow the seventh-most sacks in the NFL and they’ll surely have an uphill battle in a place like Lambeau Field. Let’s take a look as the Packers defense too, with Green Bay ranked seventh in takeaways and 14th in points allowed. That’s why they enter this matchup as a 13-point favorite with Washington projected for just 14 points, the lowest team total of the week.

Starting D’STs against Cincinnati has been a profitable endeavor all season long and we need to keep doing it. While they did bring back Andy Dalton, it’s not like they were any good with him in the first place. In fact, they still sit 26th in total yardage and 31st in points scored. That’s scary considering they also allow the fourth-most sacks in the NFL, making this a tasty matchup for the Browns.

This is a defense that’s been much better recently too, allowing 24 points or fewer in five-straight games while surrendering just 16.2 points per game in that span. The oddsmakers clearly know all of this, making Cleveland a 9.5-point favorite in this matchup with a total of 41.5. That means we’re looking at the Bengals projected for just 15 points, the second-lowest team total of the week.

Derrius Guice (WSH): Guice just had the best game of his career in Week 13 and needs to be higher than his 50 percent ownership. He’s been in this article too often for me two write him up again but go pick him up!

James Washington (PIT): Washington has been the best Steelers WR over the last five weeks, recording a touchdown in three of his last four games while establishing a rapport with Devlin Hodges.

Bo Scarbrough (DET): Scarbrough has been in this article three straight weeks and it’s no surprise when you see that he’s averaging 18 carries a game in that span. Stop letting him sit on your waiver wire!