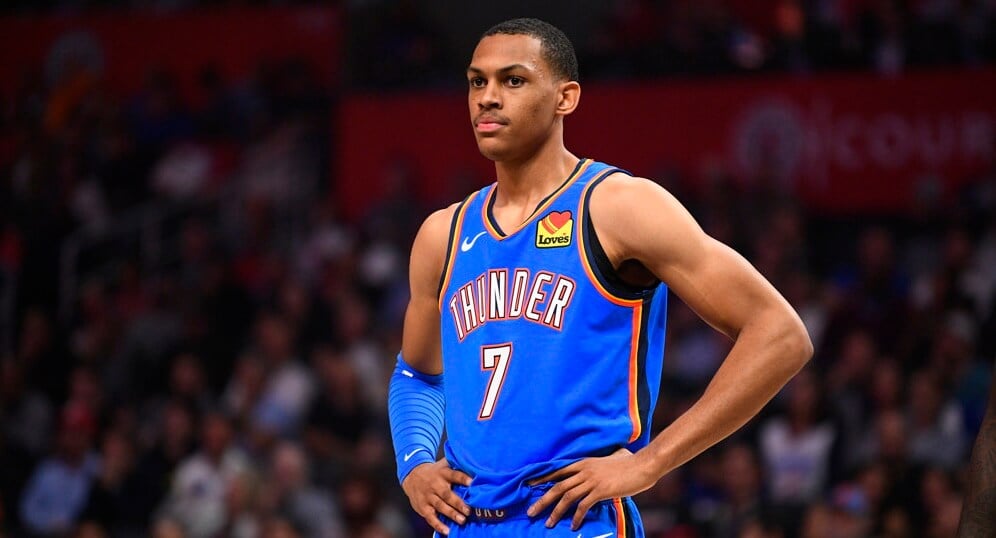 Congratulations if you are still alive in your fantasy basketball leagues! The finish line is in sight! Anything goes during this time of the season. It’s time to cut bait with some of your stars like Jerami Grant with the Detroit Pistons who remain in tank-mode. The best-player available theory is not always the right option with do-or-die playoff matchups. Oshae Brissett has been on fire for the Pacers but with only a three-game slate, I’m taking my chances on some Thunder players who play five times this week. Very nice! So, let’s sort through this week’s fantasy basketball waiver wire and find some players that will help you achieve the most playoff success…

The Thunder get their own little thread here as they have some of the juiciest adds available with a five-game slate. The Mavericks and Raptors also have five-game weeks but most of the main fantasy contributors are already owned on those teams.

I’ll keep this one short and sweet. Darius Bazley is the number one add for the week. We’ve mentioned his name quite a bit here on Fantrax, but Bazley is set up for great success this week. Bazley is on a tear right now averaging 24 points, 7.3 rebounds, 2.0 steals, and 1.7 3PM over his last three games and has posted at least six rebounds in six straight games. Pick him up.

Isaiah Roby continues to flash plenty of potential this season but just hasn’t been able to produce on a consistent basis. He’s got some massive upside this week as the Thunder continue to rest Luguentz Dort and Moses Brown’s minutes remain down. Roby has posted at least 8 rebounds in two of his last three games to go along with 14.5 points, 2.5 assists, 1.5 steals and 1.0 blocks. It’s time to roll with Roby for the fantasy playoffs.

Another Thunder, another inconsistent but productive player. Theo Maledon has quietly strung together a few nice games in a row here and deserves our attention with a five-game slate. He gets my nod for the not too shabby of the week award after posting 14.3 points, 3.7 rebounds, 6.7 assists, and 2.7 3PM. Solid numbers that will get the job done for you this week!

Khem Birch not only benefits here with the 5-game slate but the big news for Birch is Chris Boucher will miss the entire week with a sprained MCL. Birch might not wow you, but he’ll help you in the rebound and blocks category as he’s posted at least six rebounds and one block in six straight games. During that span, he’s averaging 9.5 points, 6.5 rebounds, 1.0 steals, and 1.7 blocks per game. He only went over 30 minutes in one of those games so the upside is there in the North.

The injuries for the Denver Nuggets are starting to pile up as Will Barton and Monte Morris join Jamal Murray on the injured list in Denver. This gives Facundo Campazzo sole possession of point guard duties in Mile-High. Campazzo thrived with the role, posting 13 assists Saturday night and makes for a solid add as assists can be hard to come by on the waiver wire. The points haven’t been there for Campazzo but averaging 8.5 assists and 2.0 steals over the past couple of games will get the job done in fantasy land.

I’ll admit Payton Pritchard is a bit of a risky add but the rookie has scored double-digit points in five of his last six games and remains a solid add for the week. The Celtics are dealing with some nicks and bruises here and there and have been resting key players. Kemba Walker does not play on back-to-back sets meanwhile, Jaylen Brown and Jayson Tatum were dealing with minor shoulder and ankle injuries last week and could become rest candidates down the stretch. Pritchard posted 22 points with six 3PM in his last game without Walker so look out for PP to make some noise this week. Do you like apples? I like Pritchard to rack them up and produce this week.

Houston…We have a problem. Sorry, I couldn’t help myself with that one. Although, the Rockets are dealing with injuries and health protocols left and right and only dressed seven players Saturday leaving some opportunity for Average Joe’s like D.J. Wilson. Christian Wood has been battling a sore ankle for quite some time and could be a shutdown candidate with the last-place Rockets having nothing to play for. Wilson thrived playing 40 minutes and posting 28 points, 8 rebounds, 4 assists, 3 steals, and 3 3PM on Saturday. There’s a lot of players who get the opportunity and still don’t post those kinds of numbers. Houston! Problem averted! D.J. Wilson is here to save the day.

Check out Mike’s piece on Fantasy Playoffs Strategy for more Tips & Advice to win your week!