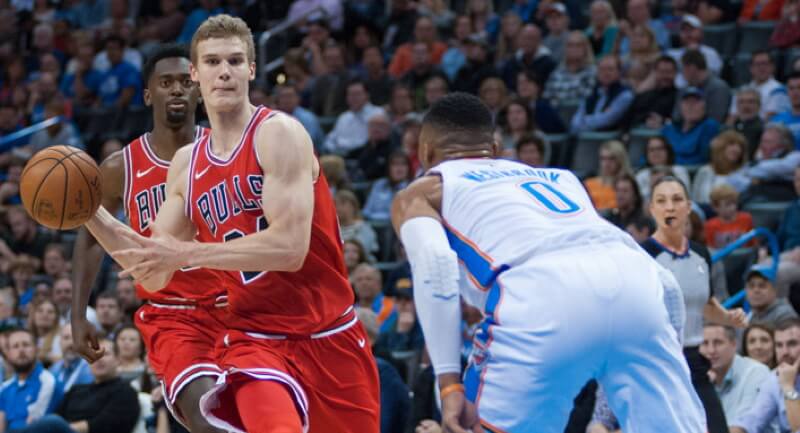 Depending on how your fantasy basketball season has gone this year, you might be heading into the playoffs with championship aspirations. Others, however, might be looking at an early end to the season. If you’re part of the latter group, or even if you’re not, it might be time to start looking ahead toward next season. Especially if you are in a keeper league, you can get a huge head start on next season by finding some great value out of players who will remain on your team for the upcoming year.

These are likely players who have either underperformed this season, were hurt for the majority of the year, or are perhaps young players who are expected to see a major boost in playing time next season. Whatever the reason, being able to target these players and keep them for next season could put you a few steps ahead of the competition as you prepare for the 2021-22 fantasy basketball season.

After playing just three games at the start of the season, Spencer Dinwiddie suffered a torn right ACL, prematurely ending what was expected to be another strong season for the Nets guard. While he was certainly going to take a step back in total production due to the presence of Kyrie Irving and Kevin Durant playing together, along with the eventual arrival of James Harden, Dinwiddie was still expected to carve out a major role as the team’s next top scorer and potential sixth man.

Dinwiddie put up the best numbers of his career across the 2019-20 campaign, averaging 20.6 points, 3.5 rebounds, and 6.8 assists while knocking down 1.9 threes per game. While these stats seem unattainable playing behind Brooklyn’s big three, it is very likely that he is still being severely undervalued heading into next season. Between rest and injuries, plenty of other Nets have stepped up to have big games, including Bruce Brown, Landry Shamet, and Tyler Johnson. If Dinwiddie was healthy and playing, however, it seems likely that he would be the one leading their short-handed offense on most nights as opposed to this “next man up” approach that the Nets have been forced to use.

While a torn ACL is certainly no easy injury to recover from, Dinwiddie has already done it once before back in his college days at Colorado, and he seems confident in his ability to do it again. Still just 28-years-old, Dinwiddie is theoretically entering the prime of his career, and he makes for a terrific bounce-back candidate for next season. If you are able to grab him as a keeper for the upcoming year of fantasy basketball, he could wind up providing fantastic value.

The Chicago Bulls have been a bit of a mess over the course of the season (and the last couple of seasons), and Lauri Markkanen has arguably been negatively impacted more than anyone. Playing the fewest minutes of his career, Markkanen has now been demoted to a bench role in which he’s scored 8 points or fewer in five of his last six games. For the season, his 14.7 points, 5.5 rebounds, 0.9 assists, 0.4 steals, and 0.3 blocks per game are all career worsts. However, the former seventh overall draft pick will be a free agent at the end of this season, and his new home could be the start of a much-needed fresh start.

The latest rumors are that the San Antonio Spurs are prepared to go after Markkanen in free agency, a fit that could be close to perfect, given their culture and their ability to get the most out of their talent. Though Markkanen has seemingly regressed on the surface, he is full of talent and is still just 23 years old. Two years ago, we saw him post a career-best 18.7 points per game to go with 9.0 rebounds and 2.3 threes per game. Given the right situation, it seems entirely reasonable to think he can average 20 and 10 while knocking down a couple triples per game, a feat currently only being accomplished by Nikola Vucevic, Karl-Anthony Towns, and Julius Randle. Even if he falls short of those lofty goals, he still makes for a strong bounce-back candidate next season and an excellent potential keeper in fantasy leagues.

Similar to Dinwiddie, Jonathan Isaac has missed this entire NBA season as he recovers from a torn left ACL. Having had a successful surgery back in August, however, he should have more than enough time to be back to 100% health and ready to go when the 2021-22 season kicks off. That’s big news for both the Magic and fantasy basketball players, as he has a great shot at being the NBA comeback player of the year as well as being a potential keeper who could be a huge difference-maker in fantasy hoops.

Still just 23 years old, Isaac already looked like one of, if not the best defender in the league in his 34 games played last season before going down with the injury. At 6’11” with a 7’1″ wingspan, Isaac was able to put up 1.6 steals and 2.3 blocks per game in just under 29 minutes per game. For reference, of the four players in the league averaging 2 or more blocks per game this season, none of them are averaging more than a steal per game. Isaac was essentially in a league of his own on defense, and he was doing it as a 22-year-old.

Elite defensive stats aside, the former sixth-overall draft pick has also shown great strides on the offensive side of the ball, and he looks like someone who could become a real threat in the near future. Isaac averaged 11.9 points, 6.8 rebounds, 1.4 assists, and 0.9 threes per game, which while not great individually, show a lot of improvement compared to his first two years in the league. He also took a major step forward in efficiency, knocking down 47% of his shots, along with a very respectable 34% mark from beyond the arc.

Assuming he can at least maintain, if not continue to improve on those percentages, Isaac will be a tremendous value as a potential focal point on offense for the rebuilding Magic. If you are able to roster him in fantasy as a late keeper, it could be the equivalent of stealing an early-round draft pick for the upcoming season.

Just like every other season, there are always several rookies who are expected to make a huge leap forward as they enter their sophomore campaign. Many of these guys would make for solid keeper candidates heading into next year, but my favorite of the group is Pistons’ big man Isaiah Stewart. Despite being drafted 16th overall in last year’s NBA draft, Stewart had very little buzz surrounding his name as the season got underway and he remained relatively quiet for the first couple months of the season. Eventually, however, the Pistons had no choice but to tank and develop their young talent, meaning Stewart has finally begun to get his chance at solid minutes over Mason Plumlee.

Stewart has taken advantage of the minutes he’s been getting, averaging 7.1 points, 6.3 rebounds, and 1.1 blocks per game on 57.9% shooting in just 20 minutes per game. What’s more important is that it is clear to anyone who watches that Stewart is getting better every day, and the game appears to be starting to slow down for him, a big sign that a true breakout is on the horizon. Over his last two games, the big man out of Washington played 28 minutes per contest, averaging 17 points, 16.5 rebounds, and 2 blocks. Stewart has also scored 14 or more points in every game he’s seen at least 30 minutes of action, something that should become a regular occurrence for next season, assuming the Pistons stay smart and don’t suddenly decide that giving more minutes to a 31-year-old Plumlee is the key to playing winning basketball.

Defensive-minded Dwane Casey also has to be pleased with how Stewart’s defense has progressed over the course of the season. Blocks aside, the big man has committed more than 2 fouls in a game just twice in his last nine contests. This is a major development for someone who was unable to do this in 17 of his first 33 games this year, despite seeing fewer minutes at the earlier part of the season.

Stewart has clearly grown a lot this season, and the sky is the limit for the big man who is still just 19 years old. Having likely gone undrafted in most fantasy basketball leagues this season, Stewart could be a huge steal as a keeper for next season.