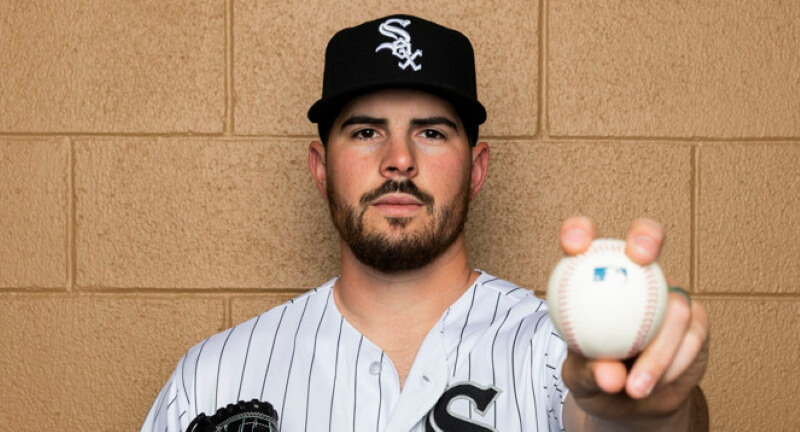 Hold onto your nachos, children! This week has been a fun one. Well, unless you drafted Stephen Strasburg or one of The Fallers. There are plenty of starters who have made tangible adjustments, leading to success stories. Casey Mize is one example, rocking an extra mile and a half with his fastball. Freddy Peralta is riding increased slider usage to a 15.5 K/9 and 2.00 ERA through 18 IP (3 GS). Matthew Boyd has had more success with his changeup (55% CSW in his last start!!) and avoided the long ball. There is a ton more to soak in, so let’s dive into this week’s biggest movers in my starting pitcher rankings.

Carlos Rodon, CHW (+9) – Rodon wasn’t the biggest riser in my starting pitcher rankings by any means, but I don’t care! You can’t stop me from writing about him! I’ve been a huge Rodon fan ever since he was drafted. He’s made some mechanical adjustments this year which have been very beneficial. So much so that he was one lazy foot-plunking away from a perfect game last week.

Rodon ranks in MLB’s 10th percentile leaders in essentially every expected metric on Statcast. His fastball velo is up two ticks and his control has dramatically improved thanks to his adjustments. His 1.93 BB/9 is easily the best of his career, while his Zone% is actually the lowest at 40.2%. Obviously, based on my ranking, I’m not saying Rodon is suddenly an ace. You always have to worry about his health, and his control isn’t likely to be quite this good moving forward. Still, he should remain a useful starter in all formats this season.

Alex Cobb, LAA (+18) – COVID cancellations have screwed Cobb from making his latest start. I’d like to see more of him, but what we’ve seen so far is encouraging, to say the least. What has fueled his 13.11 K/9? Well don’t look now MacReady, but it’s a lot more of The Thing!! 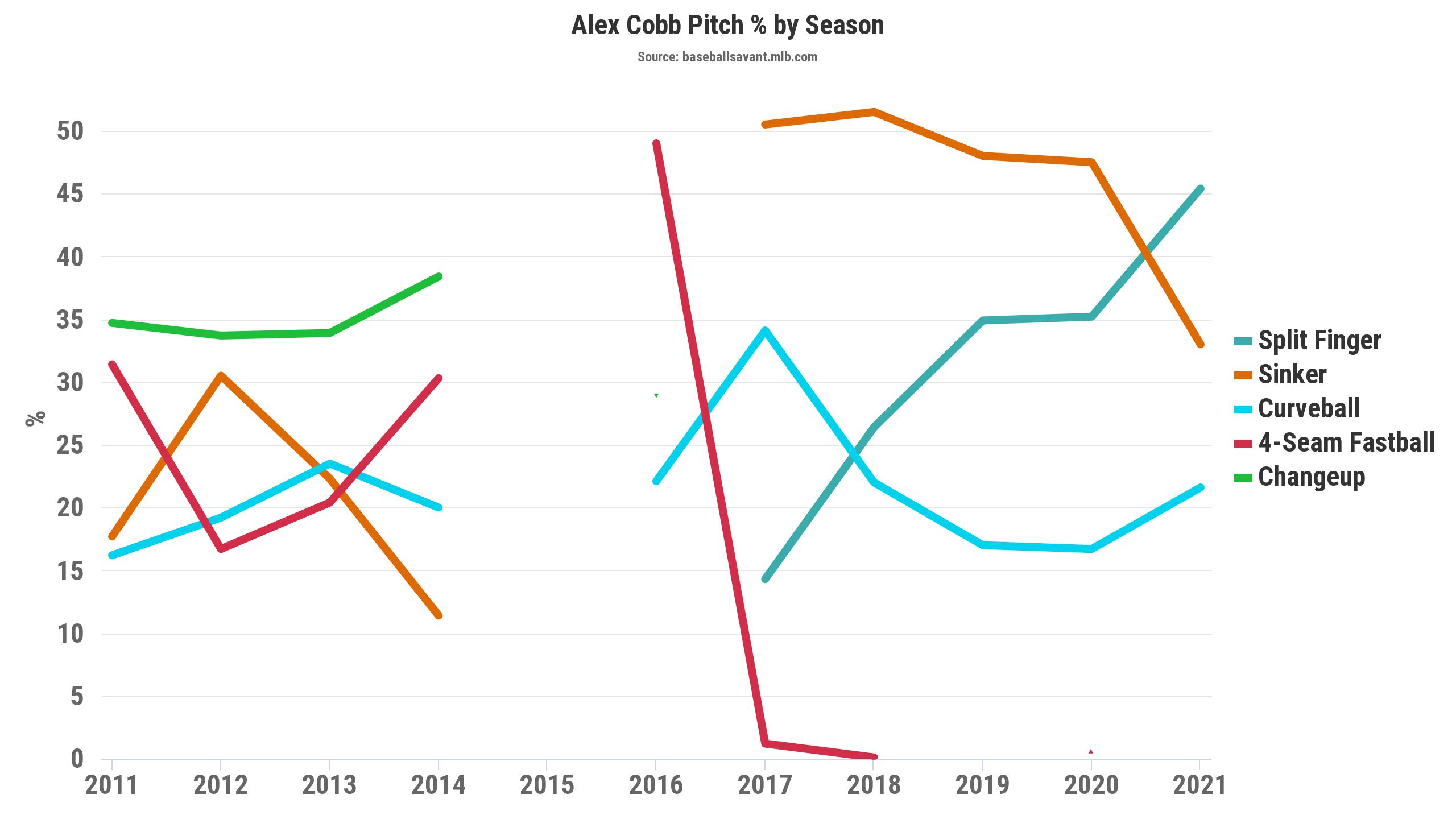 Yes, the splitter/changeup hybrid which Cobb dubbed “The Thing” has been his most used pitch! That’s something that he’s never done before. He has backed off the fastballs with 33% usage and tossed a whopping 45%, uhh, Things. That pitch has a lovely .214 xwOBA and 46.7% whiff rate, so the more the better as far as I’m concerned. Hopefully, I don’t have to tie you to a chair and probe your blood to get you interested.

He’s tried working in a new cutter to give him a legit third pitch, but hasn’t really had a chance to prove if it can be effective. At this point, adding a cutter seems like grasping at straws. I don’t have much confidence in Corbin returning to his ace-level production with the reduced velo and a bad changeup. That said, he should right the ship to an extent and be a competent mid-tier starter.

Carlos Martinez, STL (-18) – Speaking of diminished velocity, we have C-Mart returning to his starting role. Back in his heyday he averaged 96.7 MPH on the fastball. This year, well…not so much. He’s averaging 92.4 MPH in 2021, leaning more on his cutter (90.3 MPH) than ever instead. The cutter has a .468 xwOBA, which is less than idea. Rather than just ragging on everything that has sucked so far, I’ll just drop in this image for your eyeballs to absorb. 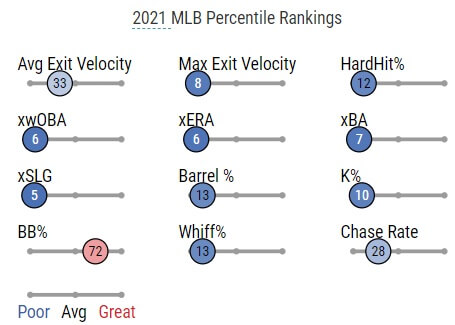 Is that bad? He’s not missing bats, and frankly, I don’t think he’ll be useful in 10- or 12-team mixers anytime soon. He could make some adjustments, theoretically, and recover some velocity. I think it’s more likely he leaves the Top 100 list instead.

Anthony DeSclafani, SF (SP63) – I held out on Tony Disco for a while before adding him to the list. Don’t yell at me, I was busy scrubbing the acrid taste of his 2020 7.22 ERA out of my mouth. He hasn’t exactly faced a murderer’s row of opponents either, with his last two being the Rockies at home and a trip to that weird cave in Miami. He has opted for a few more curves than sliders so far, but the key has been more grounders with the fastball. His launch angle has dropped from 22 degrees in 2020 to seven degrees this year. That has led to more grounders and fewer homers. I’m prepared to go back in time with my fondue set and do the Disco, particularly for home matchups.

Alex Wood, SF (SP73) – Making his triumphant return from a back injury, Wood pitched like a redwood among shrubberies. He tossed five shutout innings, giving up just three hits and striking out four without issuing a walk. He hasn’t actually been an effective fantasy asset since 2018, but this start leaves room for optimism. Wood used his breaking ball 44% of the time with an effective 42% CSW on it. His fastball was a solid 91.6 MPH and he spotted it well, earning 10 called strikes. As long as the command and the offspeed usage remain elevated, I’m gonna be excited to get some Wood.

Huascar Ynoa, ATL (SP77) – We saw the good and the bad with Ynoa over this past week. After a 10-strikeout gem against Miami in his first start, Ynoa blew up for six runs against what had been a sleepwalking Cubs lineup. Huascar also happens to be the sound I make when I get kicked in the nuts, and that’s how you felt after that last start. We can expect that sort of volatility as long as he’s in the Braves rotation. He has been working in more changeups, but in all reality, Ynoa is a fastball/slider pitcher. Without a viable third pitch, his innings will be limited. He’ll miss plenty of bats and be useful just because of that, but his ceiling is limited.

Are you on board with Nathan’s starting pitcher rankings? For more help in getting ready for the coming week, check out Eric Cross’s latest Fantasy Baseball Waiver Wire column.