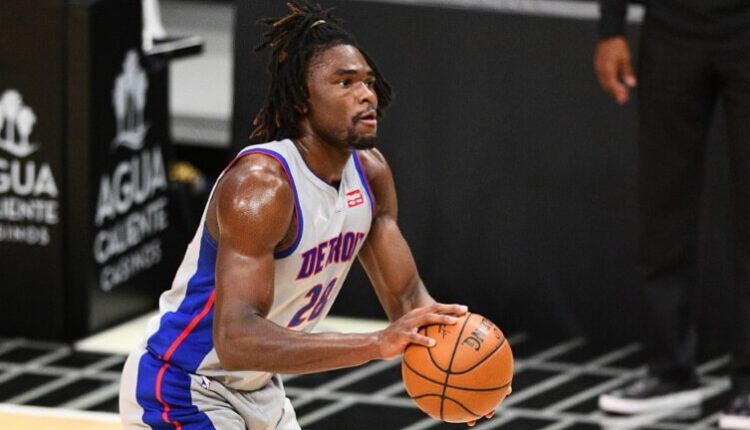 Here we go! The fantasy basketball playoffs are here! Congratulations on the long journey and best of luck the rest of the way. Some leagues may be in the semis already and lots of tough decisions have to be made. Injuries and Covid-19 health protocols continue to dominate the headlines and you may have to cut bait with certain players if they can’t help you in do-or-die mode. This week there are 19 teams that play four games which is a decent place to look. Only the Toronto Raptors play two games this week so you might want to stay away from the Malachi Flynn hype unless you have a bye-week! Here are a few players that are potentially available on your fantasy basketball waiver wire and can help you this week and begin your Championship journey!

It’s Isaiah Stewart time in Mo-Town folks. Mason Plumlee has already been ruled out Monday for rest despite the game not even being a back-to-back situation. This means the youth movement has officially arrived in Detroit. The rookie Stewart is fresh off two straight monster performances averaging 17 points, 16.5 rebounds, and 2.0 blocks per game. This is league-winning material you cannot miss out on! Drop Plumlee while you’re at it because I got no-time for DNP’s! Rev up your pistons this week for Stewart, baby.

Normally I won’t discuss someone in the 70% ownership level but since Coby White is in the top-20 most dropped players list I’ll make an exception here. White has been super inconsistent of late, battling injuries, Covid-19 health protocols, and being removed from the starting lineup! Things were looking pretty bleak for the sophomore but with All-Star Zach LaVine out at least the next 10 days due to health protocols the potential breakout player this season might be ready to turn it on just in the nick of time. White was awesome on Friday night, posting 27 points, 5 rebounds, 7 assists, and 4 3PM and he’s averaging eight assists over his last two games. Zach LaVine’s top-20 usage rate is up for grabs so look for White to be a contributor to your fantasy team once again! I’m feeling bullish about this one.

In need of points and three-pointers? Then Landry Shamet is your guy! The 24-year-old is having his NBA moment right now dropping a career-high 30 points and scoring double-digit points in four-straight games. Kevin Durant left Sunday’s game against the Heat with a thigh contusion and you can bet the Nets will take extra precaution with their star as he just came back after missing months from a hamstring injury. James Harden could return soon but even so this remains an excellent add for the week as Shamet was putting up solid numbers with Durant and Kyrie Irving in the lineup. Shamet has put together averages of 21.5 points, 3.0 assists, and 4.8 3PM over his last four games. Sign me up for that.

Speaking of three-pointers… Grayson Allen is 3rd in the NBA with 35 made three-pointers in the month of April. The third-year pro is coming on strong here scoring double-digit points in 8 out of his last 10 games including averages of 18.5 points, 4.3 rebounds, 1.0 steals, and 5.0 3PM over his last four. Jonas Valanciunas who’s been on an absolute tear is out with a concussion and Dillon Brooks is dealing with thigh soreness. The Grizzlies could be pretty thin to start the week so points will be up for grabs. Allen from Graceland baby! Book it.

It’s never a bad idea to add players from poor teams as veterans tend to rest for the youth. This hasn’t fully been the case yet for the 22-year-old in Washington, but things are on the rise right now for the 3rd year pro. Wizards Head Coach Scott Brooks continues to praise Gafford’s frontcourt presence with back-to-back four-block games so the minutes should begin to increase.  Rui Hachimura is out to start the week after suffering a knee injury and Alex Len is dealing with a minor ankle injury which could spur the breakout for Gafford. Gafford has produced top-40 Player Efficiency numbers on the season and was great in 26 minutes on Friday posting 18 points, 7 rebounds, and 4 blocks. If Russell Westbrook or Bradley Beal get some DNP’s down the stretch Gafford’s top-40 PER numbers could reach the top-20. Watch out D.C. we got a new superhero baby!

If you want to dabble in the daily in addition to your season-long endeavors, check out Brad Kilgore’s latest NBA DFS Previews and Picks!