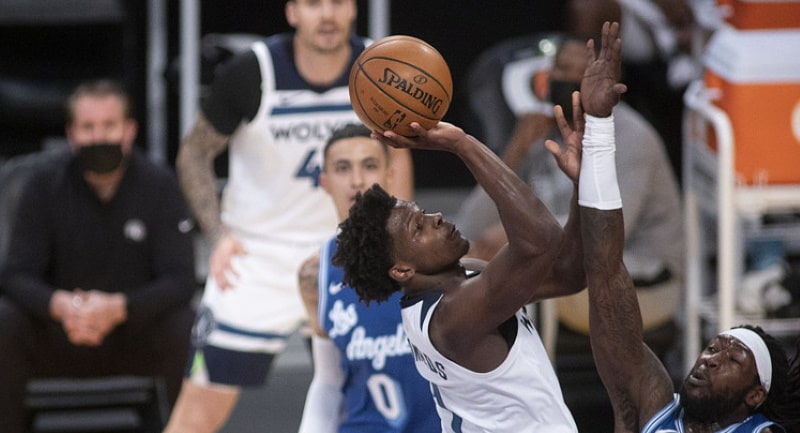 One of the toughest aspects of fantasy basketball every year is predicting how successful each rookie will be in his first season in the league. So much of it has to do with the situation they’re handed, and whether or not there is even an opening to playing time. Regardless of talent, it’s the opportunity for minutes that creates a lot of their fantasy value throughout the season.

Fortunately, the minutes tend to increase for a lot of rookies as the season progresses and they get acclimated to the NBA game. This is especially true for rookies on bad teams that fall out of playoff contention and simply want to develop their young talent toward the end of the year. So here we are, with just over a month left in the NBA regular season, and that is exactly what we are seeing. So let’s take a look at some rookies who are starting to play big minutes, and are capitalizing on their opportunities.

Rookies on the Rise

Taken as the first overall pick in the NBA draft, Anthony Edwards has not disappointed by any means. Since February 24th, the former Georgia Bulldog has been nothing short of spectacular. In that timeframe, he is averaging 23.8 points per game, including a career-high 42 against the Suns on March 18th. He is also pulling down 5.3 boards per game, reaching double-figures twice. The rookie has also made fantasy players very happy with his extreme willingness to shoot from beyond the arc, averaging 2.6 makes per game while putting up 7 or more attempts in 16 out of 18 games. As if that wasn’t enough, Edwards has been a strong defender as well, coming up with 1.6 steals per game, with at least one theft in all 18 of those games.

Edwards is now getting minutes in the mid-30s on a nightly basis, including a career-high 41 minutes in his most recent game on Saturday. With the Timberwolves owning a league-worst 12-38 record, they now seem fully committed to giving their top pick as many minutes as he can handle the rest of the way. As a result, Edwards should be a huge difference-maker down the stretch in fantasy hoops.

Though there was much less hype surrounding him entering the season, Anthony Edwards’ teammate has proven to be an almost equally exciting rookie for the Timberwolves this season. Taken with the 28th pick in the first round of the NBA draft, Jaden McDaniels has shown strong development throughout the season, basically forcing his way into the lineup with his defensive play as well as a growing offensive game.

McDaniels has respectable per-36 minute averages of 10.9 points, 5.8 rebounds, and 1.8 assists, but it’s the other categories that give him fantasy value, as he produces at a high level in threes, steals, and blocks. Per-36 minutes, the 20-year-old puts up 1.9 threes, 0.8 steals, and 1.7 blocks per game. Currently, there are fewer than ten players in the league who average even 1.0 three, 1 block, and 0.8 steals per game.

Now, McDaniels is starting to see those higher minutes as the Timberwolves have put an even greater emphasis on developing their youth. The former Washington standout has played 33 or more minutes in five of the team’s last six games, scoring 13 or more points in all five of those contests, while hitting at least 2 threes in six straight. With the defensive stats already there, the offense growing by the day, and the minutes finally sticking in the mid-30s, the rookie seems ready to provide a lot of value over the last month and a half of the season.

After being selected with the 9th overall pick in the NBA draft, Deni Avdija has shown flashes of potential but has yet to really put it all together at the pro level this year. Coming from Israel, Avdija was one of the more unknown players entering the league this year, but with a guard’s skill set and the size of the stretch four, there was a lot to like about his upside.

Avdija hasn’t seen the minutes of some other rookies thus far, averaging just 23 minutes per game this season. That has changed in his last four games however, playing at least 32 minutes in each of them, including a career-high 39 minutes against the Mavericks on Saturday. During this span, the 20-year-old has scored at least 9 points in three of the four games, while putting up at least 8 rebounds in all four of them. And while he hasn’t shown much in the way of defensive stats yet, he is averaging a three per game across the last two weeks.

With the Wizards now 7 games out of a playoff spot, having lost 11 of their last 14 games, they no longer have anything to play for aside from player development. Likely to see major minutes the rest of the way, fantasy players could do a lot worse than a near double-double and a three per game on a nightly basis, with the upside for more.

Selected with the 16th overall pick in the 2019 NBA draft, Chuma Okeke was forced to miss the entire 2020 season after suffering a torn ACL in the NCAA tournament. Now back to full health and playing big minutes with the Magic in full rebuild mode, Okeke is showing everyone why he was a projected top 10 pick before the injury.

Okeke is getting 32 minutes per game since Orlando decided to trade away Nikola Vucevic and Aaron Gordon with sights on the future, and he has made the most of this spike in playing time. The rookie is averaging 16.3 points per game in his last seven, adding 5.9 rebounds and 3 assists. He is also adding 2 threes per game, along with 1.3 steals and 0.7 blocks. Even more impressive is that he is doing all of this with high efficiency, shooting 52.4% from the floor and going 12-for-13 from the free-throw line.

Okeke is a defensive stud who also figures to be one of the focal points on offense down the stretch for Orlando. The former Auburn Tiger should be a huge difference-maker for fantasy teams down the stretch, as he could potentially be the best rookie in the league over the season’s final weeks.

While not quite as impressive as his teammate Okeke thus far, R.J. Hampton has shown the makings of a solid NBA guard over the last two weeks. Similar to Okeke, his stock sky-rocketed after the Magic began their rebuild at the trade deadline. Hampton was traded to Orlando from the Nuggets as part of the Aaron Gordon deal, and his time on the court has drastically increased as a result. The 24th overall pick in the draft has now played in five games with his new team, and he has gotten over 30 minutes per game in each of the last two. In those five games, he has per-36 minute averages of 16.4 points, 7.1 rebounds, 2.6 assists, and 1.6 steals.

In the short term, the only other point guards on the roster are Michael Carter-Williams and Chasson Randle, so the increasing minutes should only continue for now. His playing time might take a small hit when fellow rookie Cole Anthony returns from his injury, but with the Magic putting such a huge emphasis on their rebuild, there is no reason to believe the two rookies won’t share the court together for stretches. At 6’5″, Hampton is more than capable of sliding over to shooting guard in that scenario. Overall, the 20-year-old was traded into a golden opportunity in which rookies are being heavily prioritized, and R.J. Hampton appears ready to take advantage of it.