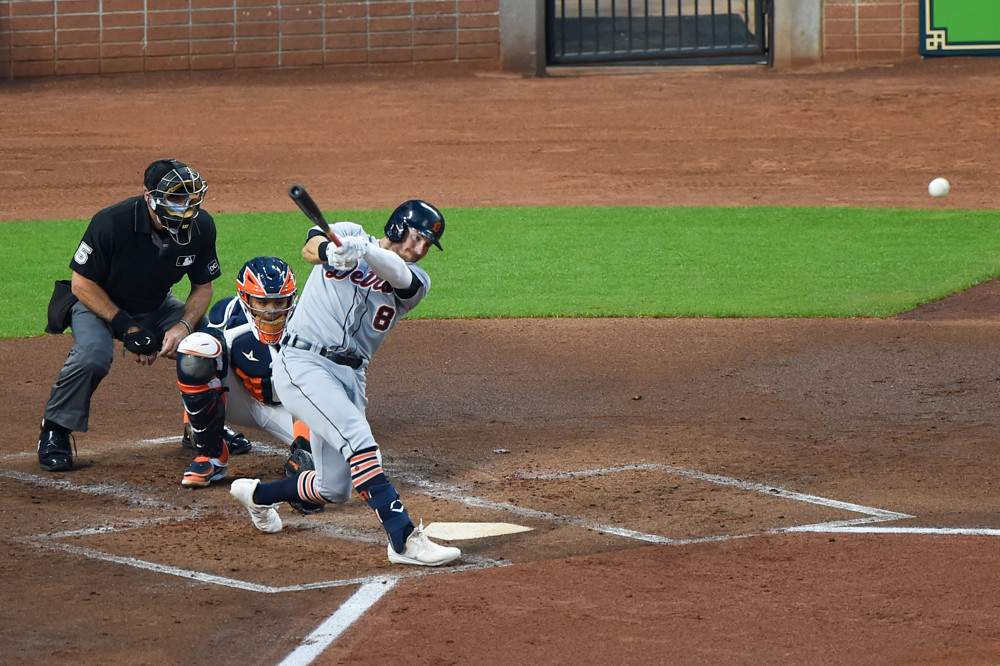 As the MLB season approaches the 1/4 mark, the injury bug keeps feasting. Isn’t that damn thing full yet? It’s unfortunate that we’ve been having to utilize the fantasy baseball waiver wire mostly to find injury replacements, but we have to play the hand we’ve been dealt. Even if it’s a terrible one. Luckily, there are plenty of players trending up this week on both sides of the ball including a couple of Tigers heating up in the Motor City.

While the rest of baseball (and fantasy baseball) is a weird place right now, Robbie Grossman is still doing Robbie Grossman things. His stellar plate approach has remained consistent (17.2 BB%, 21.9 K%) and now Grossman is making better quality of contact than he ever has. Through his first 35 games, Grossman has posted a 40.4% hard-hit rate, 89.4 average exit velocity, 10.1% barrel rate, .453 xSLG, and .421 xwOBACON, all of which are career-best marks.

With that said, his actual slugging is down 99 points from last season and he’s still only hitting .233. But in today’s game, .233 isn’t quite as much of a black hole as it used to be. Now, that’s simply a below-average mark. If you’re fine with never receiving a good AVG from Grossman, he can help your squad in other ways. Grossman has racked up seven steals thus far (T-3rd in MLB) and has a .377 OBP thanks to his big walk rate. He’s also heating up over the last two weeks, hitting .298 with four steals, eight runs, and 10 RBI while serving as Detroit’s everyday leadoff hitter.

Speaking of Detroit hitters that are heating up, hello Niko Goodrum. Players like Goodrum have taken on greater importance this season as we deal with all these injuries. With his multi-positional eligibility, Goodrum can help almost everyone right now looking for a player to fill in until your star players return from the IL. And over the last two weeks, Goodrum has been performing as a top-50 player thanks to a .310 AVG, eight runs, and a league-leading five steals.

On the season, Goodrum has four home runs and six steals, putting him right around a 20/30 pace. I’m not expecting that type of season out of him obviously, but his ability to provide a speed boost and a bit of pop with multi-positional eligibility makes Goodrum an appealing waiver wire addition right now.

Double-dipping isn’t something I often do in this fantasy baseball waiver wire piece, but listing Andrew Vaughn here made too much sense. The injury to Luis Robert opened up even more of a need for Vaughn to be playing every day and now even Tony La Russa isn’t screwing this up. And what a surprise, Vaughn is starting to heat up as well. SHOCKER!

THERE IT IS! Andrew Vaughn launches his first career @MLB home run. pic.twitter.com/gMSSuaKJNw

After a stellar minor league career as a top-10 overall prospect, Nick Senzel could be considered a major disappointment thus far in his three Major League seasons. A .248/.311/.401 slash line is a far cry from his .312/.388/.508 minor league line. Bit hey, we’re not here to judge on the past, we’re here to judge on the present and what Senzel can do for you moving forward. To start, he’s starting to heat up after a cold start to the season. Over the last week, Senzel is hitting .318 with five runs scored while hitting leadoff for the Reds. He’s also been playing some 2nd base and might have dual eligibility now depending on your league settings.

The underlying metrics here are promising as well. At least in some departments. Senzel has a .302 xBA this season along with a 96th percentile sprint speed, career-best walk rate, and career-best strikeout rate. I’m not sure I can say I’m confident he’ll hit for a ton of power this season, but the pieces are here for Senzel to provide solid value in runs and average/OBP with some speed mixed in.

NOTE: After finishing this article, Senzel left the game early after colliding with the outfield wall a couple of innings earlier. Keep an eye on this.

Now that Jarred Kelenic is up, who are the next prospects we should be stashing? On the hitting side of things, the answers are easy. Outside of Wander Franco who should already be stashed universally, Jarren Duran and Vidal Brujan appear to be the next two big-name prospects that could be up relatively soon. The profiles of these two prospects are fairly similar. Both possess double-plus speed, improving power, and an above-average (Duran) to plus (Brujan) hit tool. Both are flexing that newfound power this season with four homers each through the first week and a half of minor league action.

Duran’s path to Boston only has a struggling Franchy Cordero in his way and Brujan has been used at all three outfield positions at Triple-A so far which indicates to me that Tampa is trying to get him up sooner rather than later. Both should be picked up and stashed in all leagues of 12 teams or more.

Jarred Kelenic wasn’t the only big prospect to be promoted by Seattle yesterday. Logan Gilbert, arguably their top pitching prospect, was as well and made his first Major League start last night against Zach Plesac and the Cleveland Indians. I’m sure not many were impressed by his 4 IP, 4 ER, 2 HR line, but Gilbert seemed to settle in after a rough beginning and finished with five strikeouts on the night. Racking up the strikeouts is one of the many reasons why you should want Gilbert on your fantasy teams this season.

After being drafted 14th overall back in the 2018 draft, Gilbert has recorded an impressive 2.12 ERA, 0.94 WHIP, 6.1 % walk rate, and 31.5% strikeout rate. That strikeout rate would put him 15th in MLB this season and the 25.4% K-BB would put him 13th. Gilbert has the ability to miss bats at a high clip thanks to an electric four-pitch arsenal containing an easy plus fastball and three secondaries that all project as above-average offerings. On top of that, Gilbert has consistently shown above-average to plus command and control, even if the command wasn’t quite there in his debut. This is one of the 10 best pitching prospects in the game and needs to be universally rostered now that he’s up.

Adbert Alzolay is one specific problem away from having a really impressive season. Through his first six starts, Alzolay has posted an impressive 0.88 WHIP, 5.7% walk, 29.3% strikeout rate, 33.9% whiff rate (86th percentile), and his 23.6 K-BB% ranks 14th best among the 107 starters with 30+ innings pitched entering Thursday. A lot of these impressive marks are a result of his lethal slider that he’s using nearly 50% of the time this season.

But even with all of those impressive numbers, Alzolay has a 4.50 ERA due to allowing six home runs through his first six starts. All ERA indicators peg that ERA as a tad unlucky though. If Alzolay can limit the longballs a bit better moving forward, that ERA should come down a good amount, making him even more appealing for fantasy purposes.

Speaking of an arm high on the K-BB% leaderboard, Luis Garcia’s 19.5% mark puts him in the top-40 ahead of names like Jose Berrios. Jack Flaherty, Lucas Giolito, and Sandy Alcantara. On the season, Garcia has also posted a solid 3.60 ERA and 1.07 WHIP through his first 30 innings in Houston’s rotation.

Garcia has found success this season thanks to his five-pitch arsenal containing four offerings with a whiff rate above 40%. Those being his cutter, slider, curveball, and changeup. All four also have an xBA of .201 or below. As a grouping, Garcia is throwing them 7% more this season at the expense of his four-seamer which has been his worst pitch so far. There’s a lot to like here and also a good chance Garcia is sitting on your league’s waiver wire just waiting for you to pick him up.