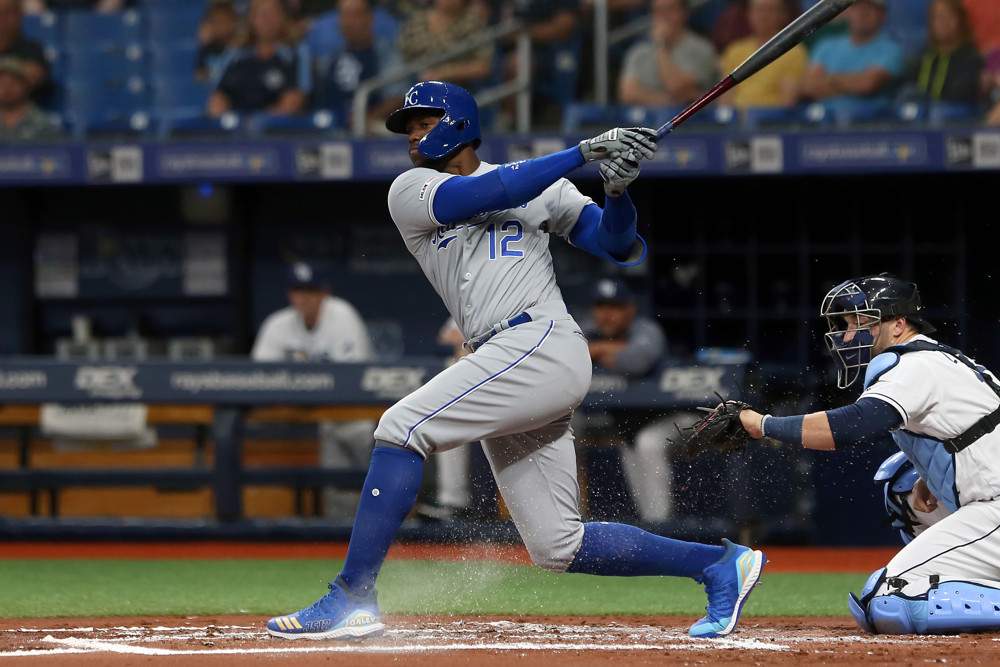 For the first time all season, we don’t have any prospect promotions invading the fantasy baseball waiver wire. Just the opposite actually as both Nate Lowe and Carter Kieboom got sent back to Triple-A. But that’s not why you’re here. You’re here to try and find a player or two to add to your team to fill a position of need or simply to add a player that’s hot at the plate. In this week’s Fantasy Baseball Waiver Wire report, we have a mix of both of those, including a former top-10 overall prospect and not one but two closing options. Let the fun begin.

Does it feel like Jorge Soler has been teasing us for quite some time now? He’ll show promise, causing us all to hustle to the waiver wire, then go back into his shell for a couple of months. Well, it’s that time again as Soler is hitting .306 with three homers, nine RBI, and nine runs over the last two weeks, and is on a 35/100 pace this season. How he’s still available in over 2/3 of leagues is a blowing my mind. Yes, the subpar plate approach is still there (career-high 33.5% strikeout rate), but Soler is hitting for plenty of power this season and is regularly hitting in the middle of the lineup for Kansas City.

Even if his 35/100 pace doesn’t last (which it likely won’t), some regression could still have him in the 25/80 range at season’s end with a batting average that you’ll likely be able to stomach. Do yourself a favor and go grab this guy if he’s available.

Say goodbye (again) to A.J. Pollock and hello to Alex Verdugo. With Pollock on the IL for at least the next six weeks with an infection in his elbow, Verdugo will man centerfield moving forward and could play himself into a full-time role if he hits well. And let’s face it, this is Verdugo we’re talking about, a career .309 minor league hitter. Hitting well is kind of his thing. Throughout his minor league career, Verdugo has displayed a plus hit tool and an advanced approach at the plate that has carried over to the Majors and even improved in some areas.

There’s not a ton of power or speed to bank on with Verdugo, but he’s the type of guy that can go 15/15 over a full season, and maybe a hint more in the power department. With the regular at-bats he has staring him in the face, Verdugo needs to be owned in more leagues.

Remember him? You know, the former top-10 overall prospect with the mammoth raw power? Yeah, you remember him, don’t you? Unfortunately, most of the memories we have of Miguel Sano are him being out of shape, not making much contact, and striking out at a very high clip. Those aren’t exactly good things to be remembered for. But hey, that’s all in the past now. In present day MLB, Sano is working his way back and appears close to getting called back up to the Twins lineup. He’s been performing quite well on his rehab stint too, recording eight hits in 20 at-bats with a pair of home runs and a pair of doubles.

Is there a chance he’s still the Sano of old and ends up back in the minors in a couple of weeks? Absolutely. But there’s still a copious amount of upside here and that’s work taking a chance on if you can stash him now. If he struggles, you drop him and move on.

In the midst of another sub-.500 season in Detroit, Ronny Rodriguez has quietly turned into a bright spot for this Tigers team. In 15 games, Rodriguez is hitting .321 with 12 extra-base hits, three homers, and a steal. Exactly 2/3 of his 18 hits have gone for extra-bases so far. Not too shabby. Obviously, that is unsustainable, but with his multi-positional eligibility around the infield, Rodriguez could serve as a decent fill-in for an injury-riddled team in desperate need of an infielder. And with the myriad of injuries this season, chances are one of your teams could use a guy like Rodriguez for the next few weeks or so. I had to make this exact move in one league where I have Fernando Tatis Jr on the IL and Carter Kieboom back down in Triple-A.

Big Mac is back! No, not the Big Mac that once his 70 homers in the season. This Bay area version isn’t nearly the same hitter, but there’s no denying that Mac Williamson can be a dangerous hitter at times. He was showing that in the Triple-A Pacific Coast League this season, slashing .378/.459/.756/1.215 with four doubles, nine home runs, 22 RBI, and 23 runs scored in 23 games. Now he has the chance to play regularly for the Giants moving forward as the San Francisco outfield has been mostly atrocious all season and could use a boost.

Big Mac provided that boost in his first game, going 2/4 with a homer, but then followed that up with an 0/5 performance last night. That’s likely what you’re going to get from Williamson this season. He’ll provide a steady power stroke, but the batting average will likely fluctuate. Still, the upside makes him worth a shot in deeper mixed leagues.

Over the last couple weeks, I’ve seen Ross Stripling’s ownership rate steadily decline to the point where he’s now available in over 40% of fantasy leagues. I get that him being jettisoned back and forth from the rotation to the bullpen isn’t ideal, but dropping him is a big mistake in my opinion. As I’ve said many times before, most of the Dodgers starting pitchers are extremely fragile. No one on this staff has made more than 27 starts in either of the last two seasons and it seems like Rich Hill, Clayton Kershaw, and Hyun-jin Ryu have one foot on the IL at all times.

While he might not be starting right now, Stripling will get more starts this season unless the aforementioned trio all off a sudden find some durability. Which isn’t likely. I’ve said it before and I’ll say it again, Stripling is a top-30 starter if given the opportunity. Even if he’s in a swing role this season, his low ratios and strikeout per inning can provide plenty of value. If Stripling was dropped in your league, I’d be adding him immediately.

After his first five starts of the season, Brandon Woodruff was sitting with an uninspiring 5.81 ERA and 1.48 WHIP. Since then, the young right-hander has reeled off three straight starts of 5+ innings and one earned run allowed, lowering his ERA and WHIP to the 4.25 and 1.37 they sit at now. Those numbers are solid but they really start looking good when you factor in his high .384 BABIP, signaling that he’s been a little unlucky in the early going this season. In fact, Woodruff’s FIP sits nearly a run and a half lower at 2.87. With a strong four-pitch arsenal, above-average command, and the ability to miss bats at a high clip, Woodruff makes for a strong buy moving forward.

After a dominant spring training, Pablo Lopez emerged as one of the top sleeper picks in drafts in mid to late-March. Many fantasy owners, myself included, felt pretty good about drafting a guy that posted a 0.90 ERA, 0.55 WHIP, and 16/1 K/BB ratio in 20 spring training innings. What followed was three lackluster starts to start the season, causing many to jump ship on the guy they considered a sleeper just a few weeks before.

Newsflash, Pablo Lopez is still pretty good and can provide plenty of fantasy value moving forward. While his ERA currently sits at 4.03, his FIP is much lower at 2.79 and his 1.08 WHIP, 2.1 BB/9, and 9.2 K/9 are all rock solid. Don’t expect a high number of wins or quality starts as Lopex doesn’t go deep into games and is on a bad Marlins team, but the ratios and strikeouts make him worth scooping up off the waiver wire.

The Rangers have had such a difficult time finding a closer this season, they’ve resorted to using the lead singer of Coldplay as their 9th inning guy. Well, not quite. This particular Chris Martin is a beast on the mound at 6’8 and has been arguably the Rangers top bullpen arm this season with a 3.14 ERA, 1.26 WHIP and 15 strikeouts in 14.1 innings. Martin throws in the mid-90’s and will mix in a slider and a cutter as well. After throwing his heater 51.1% of the time last season, Martin has increased that usage over 20% to 71.9% and it seems to be working for him so far.

Does Martin hold down the job for the rest of the season? Who the heck knows on this Texas team, but with how he’s pitched so far this season, Martin looks like he could keep the role at least for the short-term, and at this point in the season can you ask for more from a waiver wire pickup?

Hey look, two closing options on one waiver wire report. Is it Chrismas? Like in Texas, the Atlanta Braves closer situation hasn’t exactly been overly fluid this season. Arodys Vizcaino is done for the season and A.J. Minter hasn’t been as effective as everyone thought he would be. That’s putting it nicely too as the third-year southpaw has a 9.00 ERA and 2.09 WHIP this season, seemingly taking him out of the closer equation for now.

Since Minter has vacated the closer role, Jackson has thrived, picking up a couple saves and recording a 2.25 ERA and 1.19 WHIP on the season. Jackson certainly has the stuff to succeed in the 9th with a mid-90’s fastball and a sharp high-80’s slider that he throws more than 50% of the time. Jacob Webb has gotten a save opportunity as well over the last week, but Jackson is the favorite for saves moving forward.