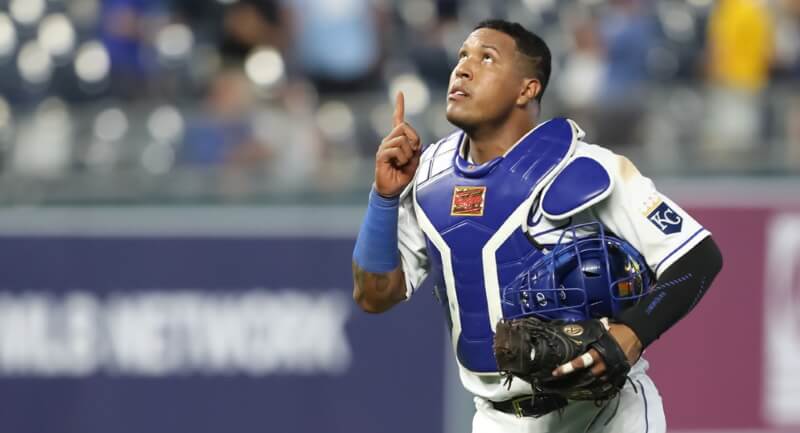 Diving into the player pool is essential in the initial stages of your Fantasy Baseball prep for next season. Knowing and understanding the player pool can help you better formula a draft strategy. It may seem like common sense, but knowing the deep and shallow positions can take you a long way. Today, we will look at the Fantasy Baseball catcher position and examine the player pool and draft strategy for the position. This article will be the first of a positional primer series that will take an in-depth look at each position across the diamond. But without further ado, let’s get into the catcher position.

It should not be a surprise that the catcher position is one of the more shallow ones for fantasy purposes. With the quality of prospects on the way, the position will only get better in time. In 2021, Salvador Perez led the way for the catcher landscape. He finished well ahead of every other catcher in playing time on top of putting up massive stats. Last year, Perez played 161 games, accumulating 665 plate appearances. J.T. Realmuto was the next closest at 134 games and just 537 plate appearances. Having volume is huge at a position like catcher and considering just seven catchers eclipsed 450 plate appearances with just three breaking the 500 mark, Perez is almost like a cheat code.

Playing time is a massive issue at the position, so the more quantity you get, usually the better. But what about actual production?

We keep going back to Salvador Perez, but that is how good his season was. He hit 15 home runs more than the next closest competitor, Mike Zunino. Perez hit a home run every 13.8 plate appearances, while Zunino averaged a home run every 11 plate appearances. What is also relevant is that Perez hit for average(.273) versus Zunino, who sunk you in that category (.216). Only seven catchers hit more than 20 home runs, and only three hit more than 25.

Perez had 45 more RBI than the next closest catcher and 16 more runs scored. Will Smith took second place spots for both stats. The correlation between counting stats and playing time keeps showing itself true.

If you are looking for stolen bases behind the dish, J.T. Realmuto and Daulton Varsho are your best bets. Realmuto still posts elite sprint speeds and is efficient in stealing bases. His 13 last season were a career-high, but a number close to 10 would not be surprising moving forward. Varsho also boasts high-end sprint speed and the willingness to steal bases. It will not be surprising if he leads all catcher in stolen bases next season.

Of the 24 catchers who received at least 350 plate appearances in 2021, the only one to hit above .300 was Buster Posey, who is now retiring. Tyler Stephenson boasted a .286 batting average over 402 plate appearances, putting him a distant second ahead of Perez’s .273 batting average. Be prepared for your catcher not to provide decent average, but Stephenson looks very intriguing, especially with Tucker Barnhart in Detroit now.

In a two-catcher, 15-team league, I find it pretty vital to get one of the top three catchers as my C1. The position falls off pretty hard, and if you wait too long, you will end up with two catchers that will likely hurt you in far too many categories. Getting a top player at the position also gives you a massive boost of production over the competition. Having Salvador Perez last season was the most significant singular advantage at any position. This year, you will have to pay for that production. You will have to decide if he is worth the draft cost to you.

On the flip side, outside of the top catching options, most catchers will cost you minimal draft capital. In a way, you do not find yourself at a massive disadvantage to most teams by waiting outside of the three teams who took the top three options. The decision comes down to whether you want to pay the premium price for Perez or wait for a few rounds for Realmuto or Smith if you want a top-flight catcher. I do feel as if this is an intelligent move for 15-team, two-catcher leagues.

It may make sense to wait on the position if you are in a standalone league with 10-12 teams. Getting the tenth or 12th best catcher could end up being as valuable as the team who drafted the fifth-best catcher off the board. Worst case, you could stream catchers week-to-week and end up being okay.

Ultimately, drafting catchers will depend a lot on how the draft falls to you. If my top-ranked catchers fall to a place I feel comfortable, I don’t mind drafting them. Otherwise, I will wait for later options such as Alejandro Kirk, Tyler Stephenson, or Keibert Ruiz in a shallower league.

Well, based on the title of this section, you probably guessed it. Salvador Perez is in a league of his own for catchers. Perez has arguably the best season of any catcher in history in 2021. It was a massive feat that he played 161 games and accumulated 665 plate appearances. That led him to dominate every other catcher when it came to counting stats. Perez finished the season with 48 home runs, which tied with Vlad Guerrero Jr. for most in baseball. No player finished with more RBIs than Perez’s 121. Even though Perez only walked at a 4.2 percent clip, he still managed to be extremely valuable with a .273/.316/.544 slash line. 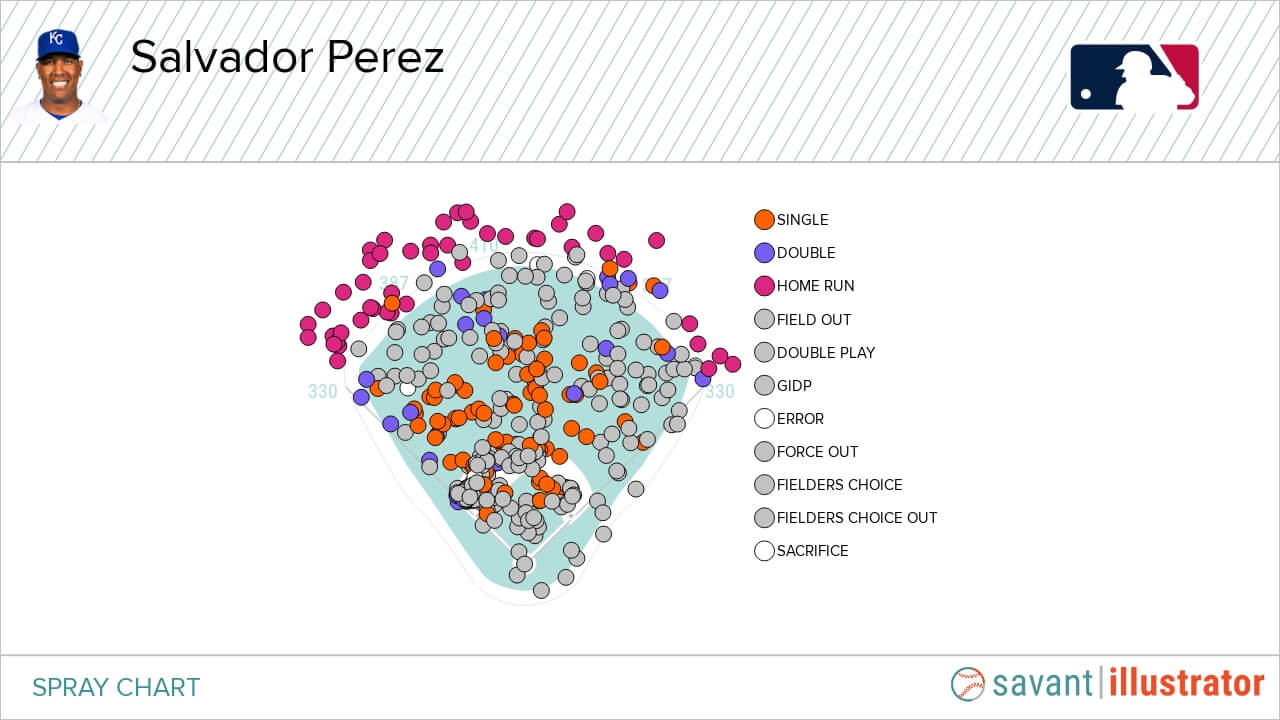 Due to the number of plate appearances that Perez accrues, he is by and far catcher number one for 2022. I would not be expecting 2021 numbers again, but another 30-35 home run season with a solid batting average is undoubtedly in play.

The second tier of catchers has only two players; J.T. Realmuto and Will Smith. These players will likely go much later than Perez does in drafts. These two end up in their tier because they find themselves in the next tier of playing time on top of producing at a high level.

The down season for J.T. Realmuto creates a decent buying opportunity as he still hit 17 home runs and stole 13 bases in 2021. I will be monitoring Realmuto’s batting average closely. He was a consistent .275-.278 hitter from 2017 to 2019 but has seen his average trend downward every season since 2016 when he hit .303. His BABIP was a massive outlier in 2016 but has otherwise been consistent. Maybe he settles in the .260 range? He will be entering his age 31 season, which does give me a few concerns, especially that his speed declines. But overall, you should be pretty confident in a J.T. Realmuto rebound.

Will Smith, on the other hand, is just entering the prime of his career. The Dodgers led many to believe that Will Smith would share time at catcher with Austin Barnes in 2021. The good news was that Smith got most of the time behind the dish, finishing with 501 regular-season plate appearances and adding 52 more in the postseason. Smith has some of the best power among catchers outside of Perez and Mike Zunino. He is capable of hitting 25 or more home runs regularly. The batting average is nothing to write home about, but it is solid.

Drop down to my third tier of catchers, and you have what I call the “volume, but questionable production tier.” Yasmani Grandal had a tremendous second half of the season but will be 33 years old next year and has dealt with injuries. Daulton Varsho also had a solid second half and could earn a decent amount of playing time thanks to his flexibility to play both outfield and behind the plate. He could provide a Realmuto-type season thanks to his power and speed. Willson Contreras rounds out this tier. You can expect a solid amount of playing time from Contreras, but the inconsistent batting average will likely hurt your team. He does make up for it by providing better power than most catchers, and he accrues playing time which helps his overall numbers.

After the third tier of players, the catcher position feels like a complete crapshoot. The position has and will continue to improve with players like Adley Rutschman, Gabriel Moreno, and Francisco Alvarez on the way. There are many other talented catching prospects as well.

For the immediate future, the 2022 Fantasy Baseball catcher landscape is murky. There is talent at the top, and you have to decide whether you are willing to pay the price to secure consistent at-bats from good catchers. The biggest positive for the position might be if the universal designated hitter comes into play next season. If that happens, we will undoubtedly see more National League catchers getting reps at DH on their off days from behind the plate.

I hope this Fantasy Baseball catcher primer gives you a solid strategy and approach for a shallow position. Trades and signings can undoubtedly shake things up, as we have already seen with the Tucker Barnhart trade to Detroit. Be sure to check back soon for the first base positional breakdown.

For now, enjoy all our other great Fantasy Baseball content on Fantrax HQ.