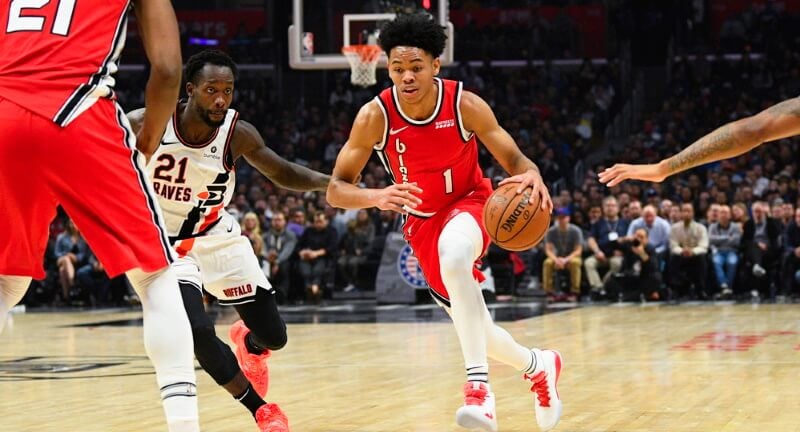 The veteran forward Nicolas Batum is a must-add player right now. The 32-year-old is not letting age get in the way of his new starring role in LaLa land averaging 15.5 points, 6.8 rebounds, 1.8 steals, and 4.0 3PM over his last four games. The Clippers will continue to lack depth without Kawhi Leonard, and with no Marcus Morris either Batum is definitely taking advantage of his 30 minutes a game. His 3-point, steals and rebound contributions make for an excellent addition to your fantasy roster. Add away and roll out the red carpet for Batum baby!

Collin Sexton left Sunday’s game with a knee injury and it was the Ricky Rubio show ladies and gentlemen. Rubio was outstanding dropping 37 points, 10 assists and 8 3PM. Rubio is top-10 in the NBA in assists making him a great add on that alone. His top-30 rank in steals is icing on the cake and he’ll be a top-50 player with Sexton out of the lineup. Get those apples in Cleveland before it’s too late!

Hello Anfernee Simons! Simons is entering the 6th man of the year sweepstakes averaging 15.4 points over his last five games. He’s quietly producing in other categories with 2.5 rebounds, 2.5 assists and 2.6 3PM over his last week but his 100% mark from the free-throw line and nearly 50% FG% puts him on the map. He’s an injury away from great numbers but still is a top-100 player on the season and is on the rise in rip city.

Time to dig deep with the 4% rostered Josh Richardson! Jaylen Brown is out two weeks due to a hamstring injury which opens up the door for Richardson who has always been a waiver wire gem in the fantasy world. Richardson is averaging just 7.5 points on the season but chipped in with 13 points, 3 assists, 1 block and 1 3PM on Saturday without Brown. Richardson also dialed up 18 points with Marcus Smart out of the lineup last week, so the journeyman Richardson once again gets his time to shine here! Worth an add.