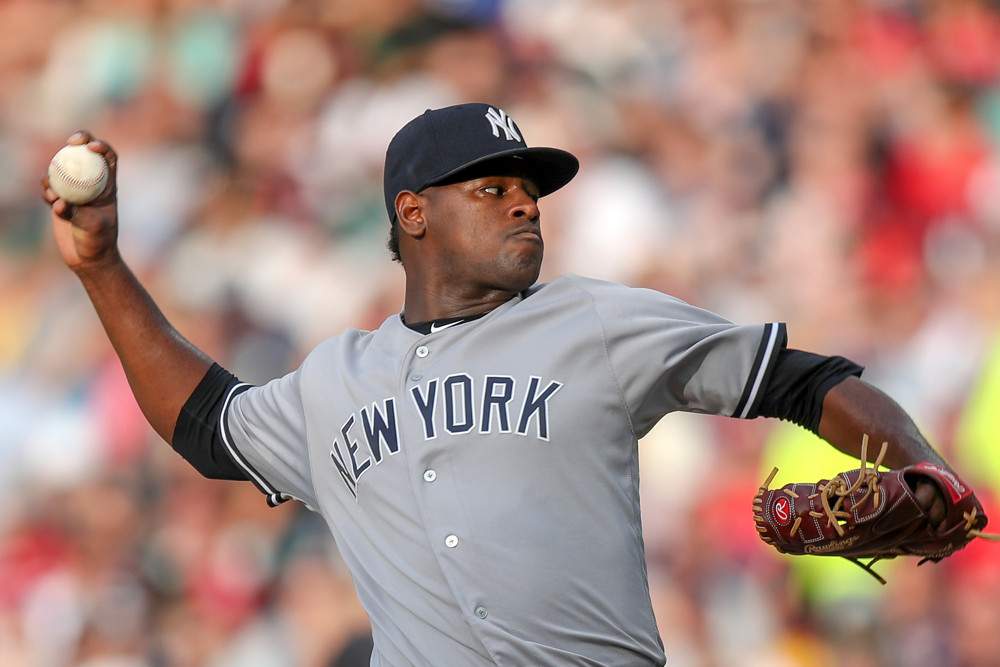 A few weeks ago, I went over several hitters to buy-low on in dynasty fantasy baseball leagues. Today, my buy-low pitchers step to the plate. Hopefully, this won’t be as ugly as 99% of the Major League pitchers trying to hit these days. No, I’m not talking about you Madison Bumgarner. This article also pairs nicely with my piece from earlier in the week on pitching prospects outside my top-100 overall to invest in. The sentiment is the same here in that pitching can be a royal pain, regardless of the level. Countless injuries continue to rack up through all levels and it seems like we all have a big name pitcher that’s not performing up to snuff this season. I’m looking at you Blake Snell!

So, what is a fantasy baseball owner to do when some of their top-end talent is kicking them in the gut? You can do many things, but one of my personal favorites is trying to acquire some buy-low talent that could pay big dividends for me down the road. That’s what we’re going to get into below with some talented arms that have fallen on hard times in 2019 for various reasons.

Can we take a second to remember just how dominant Luis Severino can be when he’s healthy? In the 2017 and 2018 seasons, Severino combined for a 3.18 ERA, 1.09 WHIP, 2.3 BB/9, and 10.5 K/9 in 384.2 innings. Both of those seasons resulted in an all-star game appearance and a top-10 finish in the American League Cy Young Award voting. As a Red Sox fan, I knew it was going to be a tough game to win anytime Severino toed the rubber against us, which he did nine times in the last two seasons. Everything was as good as can be for Severino before a shoulder injury cropped up that has derailed his 2019 season off the tracks and into a gutter.

As a Severino owner, you cannot be pleased with your investment in him right now, regardless of what format you play. In re-draft leagues, 2019 Severino is nearly a lost cause. However, this injury-plagued season has opened that buy-low window and the time is now to pounce. Now, I’m not saying that Severino is going to 100% return to his pre-injury form, but for the price you’ll likely have to pay to get him, it’s damn sure worth a shot. Let me remind you that he finished in the top-20 last season in K/9 (11th), FIP & xFIP (9th), SwStr% (13th), and many more while boasting one of the best sliders in the league per FanGraphs. If I could get Severino for 80 cents on the dollar right now in dynasty leagues, I’d be ecstatic.

When it comes to pitching prospects, none have been more frustrating to own than Alex Reyes over the last few years. Anything that could go wrong for Reyes has, and some of the issues have been his own doing. Nobody to blame but yourself when you punch a wall and break your non-throwing hand. You could call it a silver lining that at least it was his non-throwing hand, but there’s really no silver linings in a situation like that.

Due to the various arm ailments, Reyes has been limited to 67.1 combined innings between the minors and Major Leagues since 2016. After making his Major League debut in 2016, compiling a 1.57 ERA across 46 innings, Reyes missed the entire 2017 season recovering from Tommy John surgery. Following that was a torn lat muscle early in 2018 and then the broken hand. I’m probably missing an injury or two but it’s hard to keep track.

#STLCards longtime No. 1 prospect Alex Reyes returned to the mound today after making just one #MLB appearance in the past two years and hit 9⃣8⃣ with his fastball while breaking off some "scary good' curveballs: https://t.co/AY1QSeXpLh pic.twitter.com/6M7h2YkN4N

With Reyes, you need to look no further than his dynamic arsenal to remember why he was one of the top pitching prospects in the game for several seasons. Reyes will sit in the mid to upper 90’s with his heater and offset that with a plus curveball and a changeup and slider that both flash plus as well. When he’s commanding those pitches, he’s a true ace in the making. But, that command has come and gone, as has his control, and the injuries certainly don’t help either. Still, the upside here is massive and worth the risk in dynasty if you can get him on a discount.

Speaking of talented and injured former top prospects, Michael Kopech fits that bill to a freaking tee. At one point in time, Michael Kopech was considered the top pitching prospect in the game, ahead of names like Walker Buehler, Brent Honeywell, Brendan McKay, MacKenzie Gore (Padres Twitter just lashed out in outrage), and the aforementioned Reyes. For good reason too. Kopech combined a nasty arsenal of a triple-digit heater, plus-plus breaking ball, and an above-average changeup, with a bulldog mentality and elite strikeout potential. Acquiring him was a vital part of the Chris Sale trade from the White Sox side. Sure, they were dealing away one of the top pitchers in baseball, but getting Kopech back, along with Yoan Moncada and others, softened the blow.

Kopech’s first season in the White Sox organization back in 2017 ended with a 2.88 ERA, 1.17 WHIP, and well over a strikeout per inning. The 2018 season was more of the same, albeit, with much less consistency. However, Kopech turned it on when it mattered, registering a 1.84 ERA and just four walks over his last seven Triple-A starts before his promotion to the Windy City. Unfortunately, Tommy John got his greedy paws on Kopech’s pitching elbow, causing the flame-throwing righty to kiss the 2019 season goodbye. Like with Reyes, the talent here is off the charts when he’s commanding his pitches, so making a sneaky buy-low offer right now in dynasty leagues is highly advised.

Coming into the season, Zack Wheeler was one of the hottest pitcher targets in drafts. He was coming off a stellar 2018 campaign and appeared poised to join the elite ranks. So much for that. We’re 20 starts in for Wheeler and the result is a 4.71 ERA and a seat on the trading block. Chances are, Wheeler will be donning a new uniform shortly after this article is published with the MLB tradeline looming on Wednesday. So, how did we get here?

Firstly, Wheeler actually hasn’t been quite as bad as his 4.71 ERA lets on. If you take out his four starts against Washingon (20 ER in 22.2 IP), Wheeler’s ERA slides a tick under four at 3.98. Still not as low as we were expecting, but certainly easier to deal with.

If you look at the bigger picture, Wheeler’s BABIP and LOB% are up this season while his HR/9 has nearly doubled. Nothing has really changed with his pitch mix, but Wheeler is getting hit much harder in 2019 than he did last season. Nearly a full 10% harder to be exact. If he can get back to avoiding that hard contact like he’s done in the past, better surface numbers will be on the horizon.

I’ll leave you with one last little tidbit of information to munch on. Out of all qualified pitchers in 2018, Zack Wheeler’s 24.8% hard contact allowed was the lowest of them all. Numero uno. He might not be a fantasy ace, but Wheeler certainly is able to get back to his 2018 levels. Buy low while you can.

These three are still big names so I won’t go as in-depth with them, but without question, I’m expecting better things from them moving forward than they’ve shown us thus far in 2019.

With Aaron Nola, it’s 110% been about his command. His walk rate has risen from 7.0% to 9.5% this season, largely due to a near 10% drop in his first strike percentage from 69.4% in 2018 to 59.8% this season. The drop in both command and control has caused his fastball and curveball to be much less effective this season. Hitters are swinging less, chasing less, and making more contact on Nola’s pitches than they did during 2018, despite his velocity and pitch mix being nearly identical. It’s all about the command right now and due to what I’ve seen from Nola during both his Major League and minor league career, I’m expecting him to right the ship.

When it comes to Blake Snell, we truly got spoiled by him in 2018. A season with 21 wins and a 1.89 ERA? What is this, a video game? You had to know some regression was coming after that type of season. We just didn’t expect Snell’s ERA to rise above four. And now Snell is on the IL for the next 4-6 weeks following weirdly-timed elbow surgery. Snell’s FIP is less than half a run higher than 2018 and he’s even striking out more batters than in his Cy Young campaign, so it hasn’t been quite as bad as it looks on the surface. While he might not ever reach his 2018 numbers again, Snell certainly is better than his 4.28 ERA this season.

The 4.23 ERA for Noah Syndergaard is a little tougher to figure out. There are no big differences in any of his peripheral numbers and he’s even throwing more first-pitch strikes than he ever has. Sure, you could say his fastball and slider have been less valuable this season per FanGraphs, but at the same time, Thor’s curveball and changeup have been more effective than in 2018. This is not a 4.23 ERA pitcher. Expect Syndergaard to get back in line with his low-3 ERA and return to fantasy ace status soon enough.