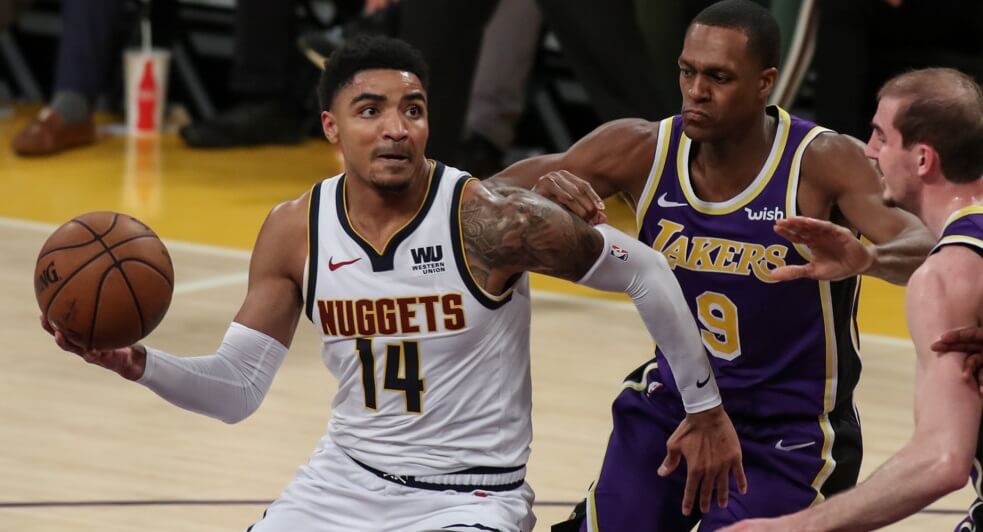 Many NBA rosters are now all but complete meaning fantasy values are starting to take shape. The starting five of a number of teams could still change in the coming months meaning these fantasy basketball values are of course, not certain. I have put together a list of the depth charts of every team as we now head to the Western Conference with the Northwest division, highlighting who I believe could be in the starting five. Of the standard league relevant players, I have projected where you will likely have to target them in the early drafts. This is followed by, what I think might be their ceiling and finally, whether they could be considered fantasy basketball values in relation to their ADP.

Despite returning with the same starters, there is certainly value to be had on the Denver roster. Gary Harris was a trainwreck last season and could, therefore, slide dramatically in drafts. He is only 12 months removed from a projected ADP inside the top-50. He could potentially drop outside the top-100 in many leagues giving him a lot of upside. Will Barton was another player who saw his season derailed by injury. Much like Harris, he could fall to the final rounds across many formats. While he doesn’t quite have the upside of Harris, there is still value to be found. Jerami Grant was acquired during the offseason and is a very solid addition. Whilst he will likely find it difficult to replicate his numbers from last season, a top-80 finish is within reach if everything falls the right way. If you are looking to take a real flier, Michael Porter Jr could be a player worth that risk. The fact he is yet to play a single game provides more questions than answers. That being said, the Nuggets have been talking him up and he is worth a look to see exactly where he fits in the rotation.

The Timberwolves failed to make any real noise this offseason, at least on the surface. Jeff Teague returns as the starting point guard and could have value given his tumultuous 2018-19. Jarrett Culver was drafted by the Timberwolves and is a real chance of starting. Much like Michael Porter Jr, Culver is worth a look with your final pick. Robert Covington is typically undervalued when it comes to draft season and that will likely be the case once again. If you can get him after the third round, there is a decent chance he returns value on his ADP. Andrew Wiggins is yet to prove anything to anyone when it comes to fantasy. Until he delivers on his potential, he is more of a late-round guy. Karl-Anthony Towns could certainly be taken with the number one pick in many formats this season. The top of the draft board is wide open with up to five players having a strong case to be number one. Towns typically plays the majority of games and no one would begrudge you taking him at one. For those in deeper formats, Noah Vonleh and Jordan Bell are players to keep an eye on.

The Thunder lost their two best players in Russell Westbrook and Paul George in separate deals. Coming in are a number of players, both veterans and youth. Chris Paul will take the reigns as the starting point guard, with the length of his tenure remaining a question for many. As long as he is on the floor he should flirt with second-round value at least. He does, however, have a well-documented injury history meaning he could slide in drafts. Shai Gilgeous-Alexander has a great opportunity and is likely to be hyped as draft season approaches. Managers are going to have to use a mid-round pick but that could climb to the early rounds come October. Danilo Gallinari is another addition to the Thunder and could be a nice sleeper based on last seasons numbers. Managers are still going to play it safe when it comes to drafting the Italian, giving him plenty of potential value. Steven Adams remains and could be in for a breakout season. Without Westbrook on the floor, Adams could emerge as one of the best rebounders in the league. His free-throws will likely continue to be an issue, putting a cap on his value. That being said, a top-50 campaign is certainly within reach.

Portland’s guard rotation remains the same with both Damian Lillard and C.J. McCollum at the helm. The forward rotation is arguably the hardest to predict moving forward. It could even be as simple as whoever starts has immediate value. Kent Bazemore and Mario Hezonja seem like the obvious candidates, however, neither has tremendous upside. Jusuf Nurkic appears as though he is going to miss the bulk of the season, making him near impossible to draft. Hassan Whiteside should come in as the starting center and will be looking to turn things around after a couple of subpar seasons. Zach Collins is perhaps the most intriguing player on the roster. My initial thought was that he would serve as the backup for Whiteside. However, word is that the Trail Blazers are leaning towards giving him the starting power forward spot. He is a player worth grabbing late based on his fantasy-friendly skill set and could be a fantastic value pick.

The Jazz were big winners this offseason and look set to challenge for the Western Conference title. Mike Conley replaces Ricky Rubio as the starting point guard and should have similar value to last season. Donovan Mitchell was disappointing during his sophomore season but with more talent around him, could be in line for a bounce back. Bojan Bogdanovic is coming off a career year in Indiana and certainly adds to the Jazz’ offensive prowess. From a fantasy perspective, he should be able to flirt with top-100 value which is likely where he will be going in drafts. Joe Ingles should also hold value when compared to his projected ADP, as should Rudy Gobert. For those in deep leagues, Ed Davis is almost certainly going to provide elite rebounding numbers off the bench.

Also, check out the Fantasy Values of the Atlantic Division, Southeast Division, and Central Division