Pitching Prospects Outside My Top-100 to Invest Heavily In 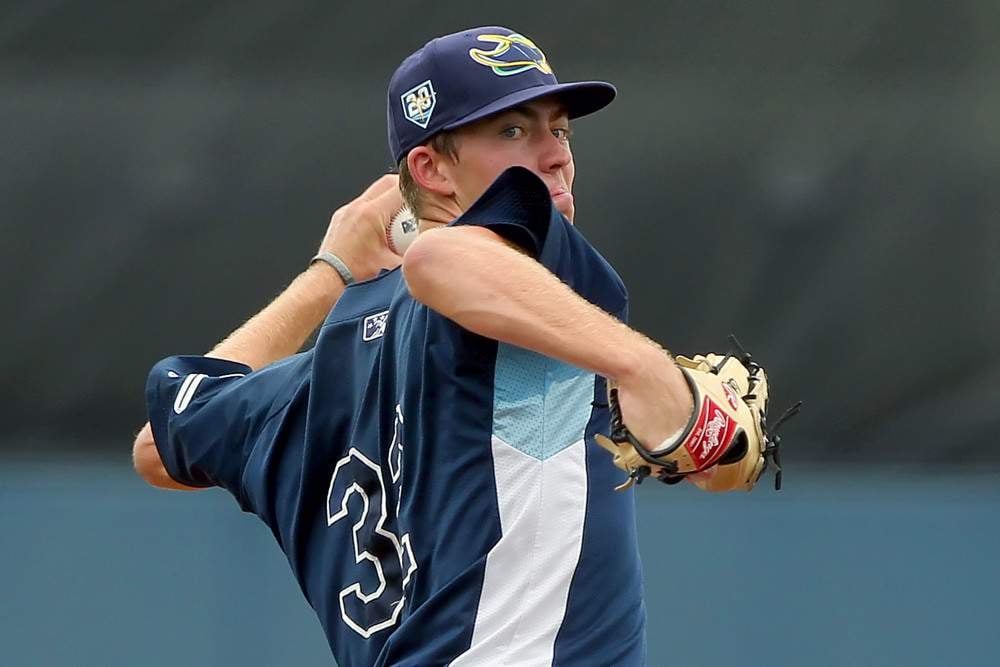 Owning top-end pitching prospects in dynasty leagues can be a fickle beast. Honestly, it can be a downright pain in the ass. This year has been a perfect example of that. Coming into the season, my top five pitching prospects were Forrest Whitley, Jesus Luzardo, Michael Kopech, Alex Reyes, and Dylan Cease, in that order. Now, let’s see how 2019 has gone for this high-upside quintet of arms…

Jesus Luzardo – After a strong showing in Spring Training, Luzardo missed the first two months of the season with a shoulder strain and is now currently shut down with a rotator cuff strain. He was only able to get on the mound for five outings between the two injuries and now his 2019 MLB debut is in doubt.

Michael Kopech – Out for the season after undergoing Tommy John surgery.

Alex Reyes – Has dealt with performance issues, injuries, maturity issues, etc. Cannot seem to gain any positive momentum towards being a Major League force. The upside is still immensely high, but there are a lot of things to work out here.

Dylan Cease – Has had an okay season in Triple-A, but has struggled some with his command which has extended into the Majors. Hasn’t really built off his dominant 2018 season.

Chances are if you own one of these guys, especially one of the first four, you’re pretty frustrated right now. This is just my top-5 arms too. We also can’t forget that Brent Honeywell is once again injured, Hunter Greene is out for the season, A.J Puk is still working his way back from TJS, and pitchers like Touki Toussaint and Mitch Keller have struggled. Sure, it hasn’t all been bad with MacKenzie Gore, Chris Paddack, Casey Mize, and others excelling, but that just proves the point I’m trying to make here. There’s so much uncertainty and risk when it comes to pitching prospects and investing in elite arms.

That’s where this article comes in. Chances are almost everyone reading this article has been burned this season by their pitching prospects, especially their top ones. There’s a reason why the acronym TINSTAAPP was created. And for those that don’t know, that means “There is no such thing as a pitching prospect.”

Below are several arms that have the upside to develop into elite pitching prospects within the next year or two. Investing in some of these guys now could pay big dividends down the road and help ease some of the frustration you’re having now.

Pitching Prospects to Invest Heavily In for Dynasty Leagues

Okay, I’m cheating a little bit here, but I just can’t help myself. Matthew Liberatore could be the next Jesus Luzardo and he might be that highly ranked within the next 12 months. Now, Liberatore is a little different than most of the guys on this list. He doesn’t have a blazing fastball, mostly sitting in the low-90’s but with the extension in his delivery, arm side life, and plus command of the pitch, his fastball grades as plus in my eyes.

That plus command extends to his curve, slider, and changeup as well, all of which grade as above-average or better. Liberatore’s curveball is the best of the bunch right now with phenomenal depth thanks to a high spin rate and his changeup has flashed plus with both drop and fade. His slider is probably the 4th best pitch he throws but still projects to be an above-average offering for him.

It hasn’t taken long for Liberatore to showcase his top of the rotation upside. After the Rays drafted him 16th overall last June, Liberatore dominated rookie ball for nine starts with a 1.38 ERA, 1.04 WHIP, and 10.2 K/9, and currently has a 2.60 ERA for Single-A Bowling Green in 11 Midwest League starts. With the potential for four above-average to plus pitches and plus command, I can easily see Liberatore developing into an ace and joining the elite pitching prospects in the very near future.

Even back when this system boasted Sixto Sanchez and Adonis Medina as it’s top pitching prospects, a little part of me thought that Spencer Howard might end up as the best pitcher in the system. He’s done his best to back up that notion so far in his professional career, posting a K/9 of 11-plus at every level so far. The 2019 season so far has been his best yet with a 1.79 ERA, 0.74 WHIP, 1.6 BB/9, and 12.5 K/9 across nine starts, mostly with Class-A Advanced Clearwater.

A big reason for Howard’s success this season has been improved command of his arsenal. He’s always had the stuff to develop into one of the top pitching prospects in the game, and now that he’s commanding his arsenal better, the ratios are following suit. Howard sits in the mid to upper-90’s with his fastball with strong arm side life and will mix in a plus slider, an above-average changeup, and an average curveball. The changeup flashes plus at times also. This is likely the last time you’re going to see Howard outside my top-100 overall.

While I have Daniel Espino as my #1 ranked pitching prospect from the 2019 draft, Jackson Rutledge possesses an equally as high upside and is more advanced of an arm. A big right-hander at 6’8 and 240 pounds, Rutledge works with a mid-90’s fastball that he can crank up into the upper-90s and offsets that cheddar with a plus slider in the mid to upper 80’s with sharp two-plane tilt. His low 80’s curveball has inconsistently flashed above-average to plus and Rutledge will also mix in a changeup which is behind the other three pitches in both upside and consistency.

To get to that next level and develop into the top-end pitcher I believe he can be, Rutledge will need to develop his changeup and refine his command and control. Having a plus fastball/slider combination is all fine and dandy, but in order to get to that lofty ceiling, the changeup will need to improve. That’s what I look for in a top-end arm. Sure developing more consistency in his curve could help also, but having an above-average changeup to offset lefty batters would be a big boon to his value. If he does that, watch out.

Edward Cabrera K’d 10 tonight for @JaxShrimp and I was told this week in terms of talent, he is right there with Sixto Sanchez. Internally the Marlins feel he is developing into a potential ace.

Well then. You know, at first glance you might think “No freaking way!” But after you really watch Edward Cabrera pitch, it doesn’t sound as far-fetched. Personally, I still give the nod to Sixto, but the gap is definitely closing. The big 6’4 right-hander has dominated both the Class-A Advanced Florida State League and Double-A Southern League this season. In 15 combined starts, Cabrera has compiled a 2.20 ERA, 0.98 WHIP, 2.7 BB/9, and 11.0 K/9 in 82.0 innings. Opposing batters are only hitting .191 off Cabrera with five home runs.

When it comes to the arsenal, Cabrera fits the mold of your prototypical big hard-throwing righty with a plus breaking pitch (slider), an inconsistent changeup, and below-average command. Those last two were what gave me pause in ranking him highly in the past. But now that both have shown improvement in 2019, Cabrera is on the fast track to joining the elite ranks of pitching prospects. If he continues to develop/perform like he has this season, get ready to see him in or near my top-50 overall next spring.

With all the pitching talent in this Detroit system, Tarik Skubal’s breakout season hasn’t gotten nearly as much publicity as it should. After ending 2018 with a 0.40 ERA across eight relief appearances and one start, Detroit moved Skubal into the rotation full-time and assigned him to Class-A Advanced Lakeland to start 2019. He made 15 starts at the level, posting a 2.58 ERA, 1.01 WHIP, 2.1 BB/9, and 10.9 K/9 in 80.1 innings. That strong performance earned him the bump up to Erie in the Double-A Eastern League where he’s been even more impressive. Through his first three starts with Erie, Skubal has allowed just one run in 16 innings while striking out 34. Yes, 34. That’s a sexy 19.1 K/9 for those wondering.

Made Brujan look silly with the last pitch.

Hindsight is 20/20, but the Tigers got a steal when they took Skubal in the 9th round of the 2018 draft. The arsenal consists of a low fastball that can get up into the mid-90’s at times with run that grades as plus, a plus curve with good depth, and also a slider and changeup that are at least average. The slider has flashed above-average, albeit, inconsistently. While the arsenal is solid by itself, Skubal’s above-average to plus command and control has really been a key to his success. He’s able to pound the strike zone and can throw his curve for strikes or bury in below the zone for a strikeout. Already skyrocketing up my prospect rankings, it wouldn’t be surprising at all to see Skubal join the elite ranks of pitching prospects within the next year or so.