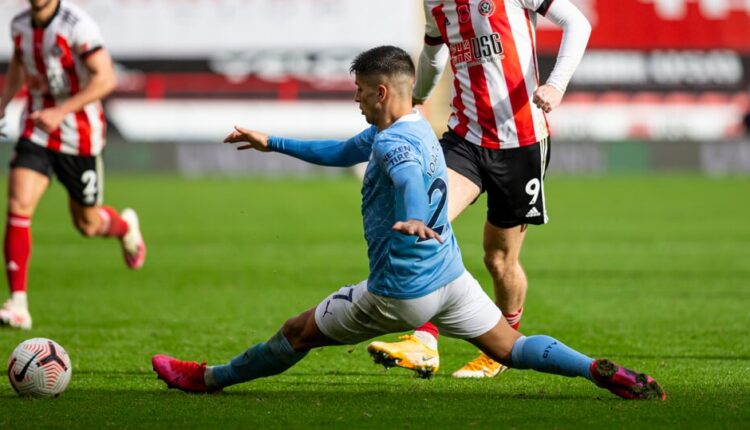 Our Gameweek 8 Player Rankings are here to outline the current prospects of key Fantasy EPL players.  The ‘Hot’ or ‘Cold’ status will help take away your emotional attachment to certain Draft Premier League players and bring in the players that you need to help you dominate your Fantrax Draft League!

What’s Changed?: I love Joao Cancelo. The Manchester City full-back was performing really well towards the end of last season, and Pep was full of praise for the Portuguese defender. I placed Cancelo in 12th position in my pre-season Defender Draft Rankings, but based on his recent form this should have been higher! After missing the first four games through injury, Cancelo has gained 55.75 points across the subsequent three games.

I drafted Cancelo in the 7th round of the Community League, and I couldn’t be happier after sticking with him through a rough first few weeks of the season. It may be too late to trade him into your roster, but give it a go and try and convince the other manager he’ll suffer from rotation. I personally can’t see that happening considering the injuries/form/fitness of Mendy and Zinchencko.

What’s Changed?: Another player that I love. James Ward-Prowse started the season rather steadily with scores of 7, 12, 7, 12.5, and 3.5. After the score of 3.5 points in Gameweek 5, we were flooded with questions about what to do with the Saints captain. We told them all to stick by him. Ward-Prowse was averaging 8.4 PPG at that time and our advice was that his current PPG is actually pretty good all things considered. If he adds attacking returns then he’s going to be scoring exceptionally well.

Fast forward two weeks and the midfield maestro has added four attacking returns, and 54 Fantrax points to his tally! Ward-Prowse was touted as a third-round draft pick during pre-season, and he’s showing exactly why right now. Consistent performer, and not dependent on attacking returns.

What’s Changed?: Perhaps it’s becoming clear why Wolves were happy to sell Diogo Jota to Liverpool. Pedro Neto was ready to feature in the Premier League on a full-time basis. The young Portuguese winger has always looked very talented from his limited minutes in the Premier League, but it was a bit of an unknown to whether he could perform to a consistently high level.

This season has changed that perception. Neto is currently the 10th highest scoring forward in the whole of Fantrax and has a PPG of 11.93. To gain an average points score in this range after “only” gaining three attacking returns so far is impressive. Very impressive. Neto looks to have established himself in the strongest XI after gaining most of his minutes in the Europa League during his debut campaign last year.

What’s Changed?: Saiss was dropped to the bench for Gameweek 8 after playing the last couple of games at left wing-back. The big Moroccan is not a natural wing-back, so it wasn’t all that surprising that he was replaced by a player more suitable to this position in Alt Nouri. However, the fact that young defender Max Killman kept his place in the back three has the alarm bells at Saiss HQ going. The Wolves man was a solid mid-round draft pick, but he’s now seemingly lost his place in the side!

Recommendation: Hold tight and hope that Saiss gets back into the team at the expense of Killman. Nuno’s lineups are so hard to predict at the moment, its worth keeping Saiss for now. He has too much value to drop to the free-agent pool.

What’s Changed?: This is painful to write, as I’m a huge fan of Jarrod Bowen. His form last season after arriving from Hull City was amazing, and I was excited to see what he could do in a full season in the Premier League. But this season has been very poor for Bowen so far. Take away his two goal-scoring appearances in Gameweek 3 and 4, and his scores are as follows: 0, 4, 2.5, 1, 0.5. That’s 8 points from those five games. Shocking.

Of course, it’s easy to take away a player’s goals and say that his points scoring has been bad. But elite level Fantrax assets need a steady stream of ghost points to enable them to consistently score good points. Bowen just doesn’t have that right now.

Recommendation: The good thing here is that West Ham’s fixture schedule is about to turn very good. Which means that even if Bowen is now dependent on attacking returns, he’ll have plenty of chances to add to his tally of 3 goals so far this season. If you own Bowen, you’ve got to stick by him. His trade value is too low to make a deal. If you don’t own Bowen, send over some cheeky offers like Saka, Walcott, Soucek, or March for him.

What’s Changed?: Neal Maupay started the season incredibly well, gaining five attacking returns between Gameweek 2 and 4. Many Fantrax managers bought into this, as his numbers were very impressive. Delve into those numbers a little further though and you’ll reach one conclusion. Maupay doesn’t score well without attacking returns. I was always skeptical about his long term prospects because of this.

And now, Maupay was dropped for the Gameweek 7 defeat to Tottenham, didn’t make the bench, and was reportedly not injured. Considering Potter decided to enter the game without a recognized striker would lead us to believe there has been some kind of off-field incident.

Recommendation: If there is a decent free agent out there, I’d probably drop him altogether. Someone like Karlan Grant is the same kind of player as Maupay, but he actually plays. Get rid of and avoid the headache of trying to work out what has happened behind the scenes!