Dalvin Cook: Set to Break Out or a Fantasy Bust Waiting to Happen? 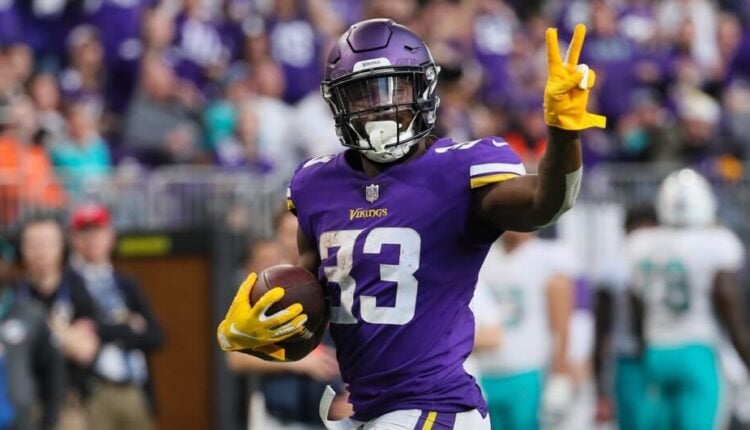 Dalvin Cook has teased fantasy owners in the past, but injuries have derailed his progress. Gary Davenport checks in the Vikings running back and tries to determine if this is the year he puts it all together.

There’s no more important position in fantasy football than running back. Even in an era of spread offenses and fantasy leagues with three weekly starters at wide receiver, having a strong cadre of running backs is crucial. Of the top-12 players in Average Draft Position here at Fantrax, 75 percent are running backs.

The problem is that before you even get out of Round 1, the questions begin at the position. Whether it’s LeVeon Bell’s new team and long layoff or Todd Gurley’s balky knee, there is no shortage of backs with question marks as big as their draft-day price-tags.

Minnesota’s Dalvin Cook doesn’t carry quite the asking price of Bell and Gurley, but he’s not cheap, either—Cook’s coming off draft boards as a low-end RB1 in the second round of most drafts. Some fantasy drafters actually see that as an opportunity for value—they believe that given his talent and an improved situation that a healthy Cook has elite fantasy upside in 2019.

Of course, there’s another camp with little interest in acquiring Cook’s services at his present ADP. They believe just as strongly than an oft-injured back on one of the worst teams in the NFL running the ball a year ago is a waste of valuable draft capital.

But which group’s right? Is Cook a rising player set for a third-year breakout or an injury-prone bust in the making?

The Case for a Breakout Season

This much isn’t really up for debate—whether you love Cook or hate him, his talent is undeniable.

It didn’t take long for that talent to be on full display. In his NFL debut last year against the New Orleans Saints, Cook peeled off 127 rushing yards on 22 carries. He averaged over 100 total yards a game and was a top-10 PPR fantasy option on a points per game basis as a rookie.

He wasn’t as effective for fantasy owners in 2018, but Cook wasn’t cat food, either. He was a top-20 PPR running back in fantasy points per game, averaged 4.6 yards per carry, and caught 40 passes. Over the last three games of the 2018 fantasy season, Cook piled up 353 total yards, scored three touchdowns, and ranked seventh in PPR fantasy points among running backs.

That late surge corresponding with the in-season elevation of Kevin Stefanski to offensive coordinator. Stefanski’s back for another run in 2018, but this time he has company—in the form of long-time OC and two-time head coach Gary Kubiak as an offensive advisor.

Kubiak’s long been a proponent of a zone-running scheme that would appear an excellent fit for Cook’s skill-set, and with Latavius Murray gone Cook is the unquestioned No. 1 back in the Twin Cities. Hall of Fame running back Terrell Davis (who played under Kubiak in Denver) expects the coach’s arrival to mean big things in 2019.

“How many times last season did Mike Zimmer say he wanted the offense to run the ball more? I lost count by November,” he wrote at NFL.com. “This is why no one should be surprised that he brought in Gary Kubiak, who came out of retirement, to guide and help the unit under new offensive coordinator Kevin Stefanski. Kubiak is the right guy to right this offense — I know because I played for Kubiak as the running back for the Denver Broncos from 1995 to 2002. Kubiak brought out the best in me (and the entire Broncos’ offense) during our run to back-to-back Super Bowl titles in the late 1990s. In fact, Kubiak’s offenses ranked among the top five in total offense and top 10 in scoring offense in eight of his 11 seasons as Broncos offensive coordinator (1995-2005). Great news for Kirk Cousins, Cook, and the entire offense.”

It’s not just Davis, either—Maurice Jones-Drew slotted Cook 10th among all running backs in the league at NFL.com.

“The hiring of Kubiak in Minnesota bodes well for Cook,” Jones-Drew said. “Throughout the years, Kubiak has turned unheralded backs into 1,000-yard rushers, including former sixth-round pick (and Hall of Famer) Terrell Davis and Mike Anderson (in Denver), Steve Slaton and undrafted free agent Adrian Foster (in Houston), and Ray Rice (in Baltimore). Cook is one of the more naturally talented backs Kubiak has worked with. Look for the third-year veteran to be maximized in this year’s offense.”

The upside present with Cook is as obvious as it is undeniable. The Vikings upgraded the offensive line this year with the addition of veteran Josh Kline and rookie first-rounder Garrett Bradbury. And given Minnesota’s formidable duo of wide receivers, you aren’t likely to see many stacked fronts.

The Case for a Bust Season

There’s a saying in fantasy football—”the most important ability is availability.”

And that’s where the Cook bandwagon hits one whopper of a pothole.

There’s just no easy way to put this—Cook’s missed more games over two NFL seasons than he’s played in. As a rookie, he made it just four games in before an ACL tear ended his season. The script was flipped after a fashion the following year—a hamstring pull caused Cook to miss five of the first eight games of the season. He carried the ball more than 10 times in a game just twice over the first 14 weeks of the year and didn’t carry the ball 20 times in any game last year.

That injury history was enough to land Cook on the preseason “Bust” list of FanDuel’s Braulio Perez.

“Which Dalvin Cook will show up for the Minnesota Vikings in 2019? Last season, Cook finished with 615 yards and two touchdowns in 11 games, splitting touches with Latavius Murray, who rushed for 578 yards and six scores,” Perez said. “With Murray now with New Orleans, the door could be open for Cook to be a top-12 RB in fantasy in 2019. However, keep in mind that Cook has proven to be injury-prone and inconsistent in his two NFL seasons, and that the Vikings will remain a pass-first offense with Kirk Cousins under center.”

The potential for injury isn’t the only problem with Cook. Under Stefanski and Kubiak the Vikings no doubt want to run the ball more. Whether they will be able to remains to be seen. Only two teams in the NFL averaged fewer yards per game on the ground last year than Minnesota’s 93.3. The Vikings O-Line was good at pass protection last year (ninth in the NFL per Football Outsiders), but the team struggled in run blocking—23rd overall.

There’s also the matter of third-round rookie Alexander Mattison, who was ostensibly selected as Murray’s replacement. At first glance, Mattison doesn’t appear a serious threat to Cook’s carry share. But all it takes is one nagging injury for the team to look to take pressure off Cook by giving Mattison more work. And while the youngster isn’t an elite talent, he does possess a well-rounded skill-set.

None of these issues are deal-breakers in and of themselves. But added together they present a legitimate cause for concern.

Full disclosure—I invested pretty heavily in Cook last year. It was an investment that turned out to be ill-advised. By the time he came on down the stretch, more teams than not that invested an early pick in Cook were just playing out the string.

As much as I try to leave the past in the past, I can’t say with 100 percent certainty that last season’s disappointment hasn’t colored my view at least a little.

In fairness, late in Round 2 isn’t an awful ADP for Cook, either. It’s a full round later than he went a season ago, the upside’s still there with the 23-year-old, and a reasonably compelling argument can be made that the situation around Cook has improved in 2019.

If he plays all (or even most) of the season, Cook should meet his ADP. He might even exceed it.

The thing is, we’ve seen this movie before—just last year. As much as we’d like to imagine the idea of Cook rolling through a full 16-game slate. But we’ve yet to see that happen. In fact, Cook hasn’t come especially close.

If you miss out on the likes of Joe Mixon of the Bengals in Round 2, the advisable course of action might just to be to pass on Cook for a wide receiver and come back after a Damien Williams (Chiefs) or Devonta Freeman (Falcons) the following round.

Or, I could be wrong about Cook for a second straight season—which obviously means he’s out to ruin me.

Where do you fall on Dalvin Cook? For more from Gary and all of our football crew head on over to the 2019 Fantrax Fantasy Football Draft Kit for more great strategy, analysis, and rankings.