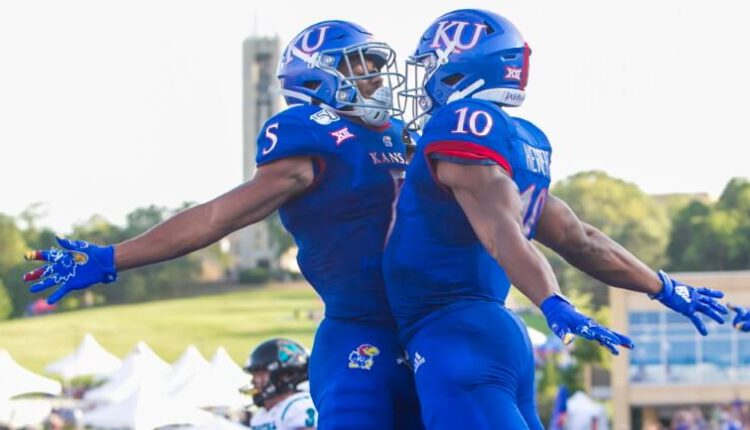 I sympathize with Oklahoma coach Lincoln Riley after the Sooners dropped their second straight game in conference play. My college fantasy football teams are performing well below standards after five weeks. Unlike Riley, I can find upgrades for my roster among free agents. Every week, CFF Diehards must work the waiver wire and upgrade the depth on their rosters. I identify the top players to acquire in CFF leagues this week.

Over the past three weeks, Grayson McCall ranks among the finest field generals in college fantasy football. He has produced the seventeenth most points, scoring 58. McCall has passed for 595 yards, rushed for 66, and tossed six touchdowns.

In high school, McCall was a three-year starter and three-star recruit by 247Sports. As a junior, the dual-threat quarterback was named the 2017 Southwestern 4A Player of the Year in North Carolina. After playing in only two games last year, he looks like a much-improved player in 2020.

After leading the Chanticleers to an upset over Kansas on September 12, McCall was named to the Davey O’Brien National Watch list. In three games, the redshirt freshman has scored 37.9, 23.8, and 34.5 fantasy points and registered 11 total touchdowns.

Against Arkansas State on Saturday, McCall completed 20 of 29 passes for 322 yards and four aerial strikes as Coastal Carolina cruised to a 52-23 victory. Impressively, the Chanticleers fell behind 14-7 after one quarter but rallied with 24 unanswered points.

McCall has led Coastal Carolina to an undefeated start (3-0) and first place in the East Division of the Sun Belt. The Chanticleers are scoring over 44 points and accumulating 441 total yards per game. The remaining schedule is not difficult, and McCall should continue scoring an abundance of fantasy points for the remainder of the year.

In 2020, the Cavaliers had to replace two-year starter Bryce Perkins behind center. Brennan Armstrong competed with Mississippi State transfer Keytaon Thompson for the position. Over the summer, Armstrong won the assignment and has exceeded expectations in the first two games of the season.

A dual-threat quarterback, Armstrong has produced over 30 fantasy points in each start this year: 30.1 against Duke and 32.4 versus Clemson last week. He ranks ahead of Spencer Rattler, K.J. Costello, Dillon Gabriel and Mac Jones in fantasy production over the last two weeks.

The redshirt freshman has completed 48 of 88 passes for 539 yards, rushed for 136 yards and totaled six touchdowns. A scrambling quarterback should never be available in over 75% of CFF leagues, and Armstrong can be a starter for the remainder of the year.

Who Ya Got at quarterback on the waiver wire?

“Grayson McCall, mainly due to the schedule he plays. Wilson was impressive yesterday, but he can’t do that each week versus the SEC.” JustinNottingh6

“All great choices because they can all run, so go with the better runner: Terry Wilson.” @aceholesrule

“Matt Corral. I know he has Alabama coming up, but looking past that matchup.” @dukeallstar1

Sometimes, it is better to be lucky than good. I needed a running back on one of my rosters last week and placed FAB bids for Deuce Vaughn, Trestan Ebner, and Khalil Herbert, who was third on my list. Two owners grabbed Vaughn and Ebner, and the fantasy gods bestowed my roster with Herbert…Bazinga!

Against Duke, Herbert rambled for 208 yards and two touchdowns. He also returned three kickoffs for 150 yards, including an 83-yarder in the third quarter. “Khalil’s been fantastic…he’s just been explosive and strong and has just got good vision. He’s been really good for us.” coach Justin Fuente stated after the game (roanoke.com).

A transfer from Kansas, Herbert has made an immediate impact on the Hokies’ ground game. The graduate student-athlete has rushed for over 100 yards in back-to-back games. Over the past two weeks, he has registered 54 fantasy points—third-best among running backs—with 312 yards rushing and three touchdowns. He has also grabbed two passes for 46 yards.

Without question, Herbert will be one of the top targets on the waiver wire among CFF diehards this week.

I looked forward to the South Carolina-Florida game to scout QB Kyle Trask and TE Kyle Pitts. However, Kevin Harris ran with power, passion and purpose all afternoon and caught my attention. He rambled for 100 yards on 22 carries, sneered four passes for 27 yards and crossed the finish line twice in the Gamecocks 38-24 loss.

Last year, Harris totaled 179 yards on 21 attempts, averaging 8.5 yards per carry and scoring four touchdowns. In his opening game, he became the first true freshman at South Carolina to score three times in a game since Marcus Lattimore in 2010. For his efforts, he was one of three players chosen for the team’s Strength and Conditioning Award, and in the classroom, named to the SEC First-Year Academic Honor Roll.

When MarShawn Lloyd tore his ACL, many South Carolina fans and onlookers assumed that there would be a running back by committee approach in 2020. Well, Harris has clearly distanced himself from the pack.

In two games, he leads the team in attempts (35), yards (155), and touchdowns (3). Offensive coordinator Mike Bobo complimented the 5’10” and 225-pounder in early September, “Kevin Harris has been really consistent, knowing what to do and getting what you can get on certain runs,” he stated (247Sports.com). It is evident when watching Harris that Bobo’s words are accurate.

Despite a formidable schedule in the SEC, Harris should be acquired by CFF managers. His performance and production in the first two games foretell a productive campaign ahead in 2020.

Who Ya Got at running back this week on the waiver wire?

“Khalil Herbert is going to have a very nice season for the Hokies. I am upset that I didn’t pick him up earlier this year. His price will be through the roof this week.” @aceholesrule

“J.D. King all the way if he is still on your waiver wire. In a run-heavy offense, just would like to see him get a few more opportunities around the goal line.” JustinNottingh6

While scouting Alabama on Saturday, I could not believe how Ainias Smith exploded off the TV screen. The Aggies employed Smith all over the formation, and he rambled for 29 yards on five carries and snatched six passes for 123 yards and two touchdowns against the Crimson Tide.

In 2019 as a true freshman, Smith played in 12 games, making three starts. He moved from receiver to running back before the Texas Bowl last year. More importantly, he is listed at both positions on Fantrax, which provides amazing roster maneuverability for CFF diehards.

Throughout the summer, Smith worked out with his father to be prepared to take the additional punishment as a ball carrier. “When you move to running back, you have got to get him stronger and bigger. We were doing a lot of weights and then a lot of speed work. By the time we ended up doing a test again, he actually ran a 4.41 [40-yard dash] and in the shuttle he ran a 3.9.” Maurice Smith, Sr. stated in mid-September (theeagle.com).

The additional training has clearly paid off. In the Aggies first two games, Smith leads the team in receiving yards (150) and second in rushing yards (80) while crossing the finish line three times. He is the sixth-ranked player among running backs in college fantasy football, notching 45 total points.

A prolific pass catcher, Smith has logged 30 receptions for 398 yards and five touchdowns in his first 14 games in an Aggie uniform. The sophomore provides much-needed flexibility when making starting lineups each week and is a great addition to CFF rosters.

Many NFL Draftniks, Dynasty owners, and professional scouts surely watch Georgia games to get a bird’s eye view of star prospect George Pickens. Yet, teammate Kearis Jackson has outperformed Pickens in the Bulldogs’ first two contests of the campaign.

The redshirt sophomore dominated Auburn on Saturday, recording nine receptions for 147 yards. He must be plucked off the waiver wire onto CFF rosters this week.

“Kearis is one of our leaders, he’s one of our toughest players, he’s one of the most demanding guys of other people, he’s a great academic student, he does what he’s supposed to do when he’s supposed to do it. He deserved that game more than anybody. He made plays, and he did a great job with that.” coach Kirby Smart proclaimed after the Auburn victory (dawgnation.com).

At 6’0” and 200-pounds, Jackson enrolled on campus as a highly-decorated recruit. In 2018, he played in the Under Armour All-American Game and named to Nike’s The Opening finals. Both PrepStar Magazine and ESPN ranked Jackson as a four-star prospect and among the top wide receiver prospects in the nation.

Opposing defensive coordinators must focus on slowing down Pickens, and Jackson most likely enjoys advantageous matchups each week to exploit. Grab Jackson this week before he is scooped up by competitors.

Who Ya Got on the waiver wire at wide receiver?

“M-I-N-G-O and Mingo was his Name-O. Give me Jonathan Mingo…that Ole Miss offense rolls and there are plenty of touches to go around.” @aceholesrule

If you found John’s College Fantasy Football Waiver Wire helpful, then you’ll definitely want to check out all of our CFF content and follow John Laub on Twitter!