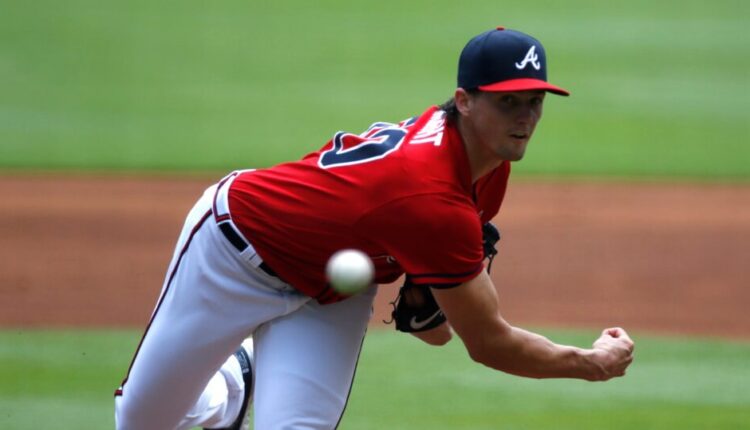 For quite some time Kye Wright was amongst the better pitching prospects in all of baseball. That was, thanks to a fastball that while it can get in the mid-to-upper 90’s doesn’t generate the swings-and-misses one would expect and a bunch of average to above secondaries. The slider is my favorite of his offerings, but he’ll flick in a curveball that will show above average from time to time and a decent changeup. He also shows quality control and decent command of his pitches. All of these ingredients should come together and create a solid mid-rotation starter and while there have been flashes he has yet to show that consistently at the highest level.

A Deeper Look at Kyle Wright

Let’s go under the hood a little bit with Kyle Wright before we decide what to make of him going forward.

Going through this season and looking at the pitches as a whole you realize something pretty quickly, outside of the slider no pitch is a true swing-and-miss offering. This is pretty alarming, I know it is a small sample size but that’s all we have to work with, with Kyle Wright. Sinkers are generally not swing and miss offerings, but what is most alarming is the four-seam fastball. He threw it 101 times and got 6 total swings and misses on the offering. In today’s game that is less than ideal. The sinker is fine(for what it is), but the curveball and changeup aren’t generating swings and misses which is a problem in the fantasy game.

So we know that outside of the slider he isn’t generating swings-and-misses at a high clip which explains why the strikeout rate isn’t high. But let’s take a look at how the pitches are performing. We shall be adding wOBA, to the above chart to show how they are performing. Feel free to use this link to what wOBA is, keep in mind we are referring to pitchers here so the lower the wOBA the better for the pitcher.

So besides his bad four-seam fastball, the pitch that gets hit the worst is his slider. So the only decent swing-and-miss offering is either getting hit and not having great results for him or generating swings-and-misses. He should probably throw the curve more because that isn’t hurting him as much. The question is what do we do with all this information because it’s clear as of right now he doesn’t generate swings and misses nor does he have fantastic results from his pitches.

He is a sinker-baller, which is a type of pitcher that while it may be valuable in real-life doesn’t tend to be highly valued in the fantasy game. There is an upside of being a ratio play unless he scrapes the sinker and even then you don’t want him throwing the four-seam fastball. There has been little to be excited about with Kyle Wright. But how do we treat him going forward because he’s still so young into his major league career?

Well, that’s hard. The easy answer is to wait and see but he was once a prominent prospect so we can’t play that game with him. In any sort of dynasty setting, you probably paid a decent price for him especially considering his draft pedigree and ranking on prospect lists. You probably envisioned him working his way to a solid mid-rotation option for you, but he hasn’t been that. He has been droppable for many stretches. He doesn’t punch people out, he allows 1.84 HR/9 over his career, and he hasn’t been an asset to your ratios.

So far, and I hope things turn around, Kyle Wright has been underwhelming and not worth holding onto. If you can trade him, I would recommend that. Let him be on someone else’s roster because what he is right now is not worth having on your bench. A sinker-slider guy who doesn’t generate K’s doesn’t help in the ratios department, maybe he gets a win here or there but that’s about it. He is currently a negative asset for you. He should be essentially free because he is going to have some sort of job next season, so maybe he’s worth a flier with your last pick.

I sat down to write this, hoping to find any sort of positive with Kyle Wright but as things currently stand I can not find any positives and believe it might be time to move on from him. Pitching at the highest level is hard, even harder when you have unremarkable stuff like Kyle Wright. To answer the title question, he is not the Wright guy for your fantasy team.

How To Use Statcast Data to Win in Fantasy Baseball