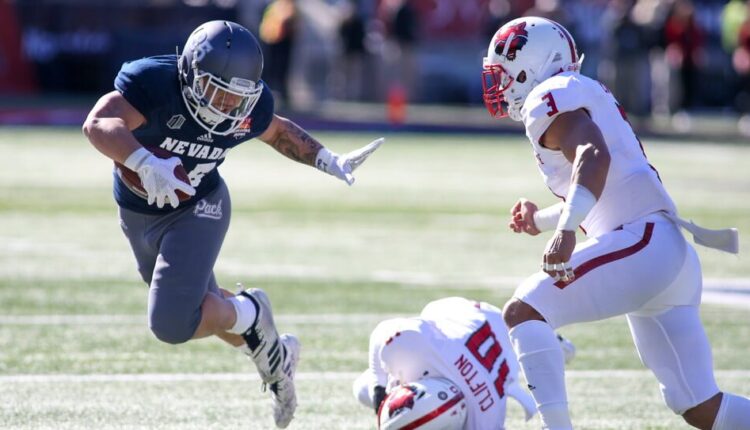 It is my busiest week of the fall at school. The first marking period is over, and I have to complete all the grades by Friday. Luckily, I have learned how to assess my students and watch football at the same time. The CFF playoffs are near and managers must continue to upgrade the depth on their rosters on the college fantasy football waiver wire. Eric Froton and I identify the top players to obtain in CFF leagues this week.

Hutchinson enters the season as an unheralded commodity who replaces a starting quarterback in Mike Glass III who produced quality fantasy numbers on a routine basis over the last two years. Hutchinson started one game in 2019 when Glass III had to sit out due to injury, completing 31 of 36 passes for 357 yards, three passing touchdowns and a rushing TD for good measure.

Last season EMU averaged 29.2 points and 283 yards passing per game while reaching bowl eligibility in three of the last four years. HC Chris Creighton is already easily the best coach in program history. So it should come as no surprise that Hutchinson performed well in his first 2020 appearance, completing 21 of 35 passes for 241 yards and a 2:2 TD:INT ratio while also punching in a rushing TD.

This week Eastern Michigan faces a Ball State team that allowed 34 points to a Miami OH team that was helmed by their backup QB after Brett Gabbert got knocked out. Hutchinson is an excellent addition for any team in need of a No. 2 QB who handles goal-line carries and has accounted for seven touchdowns in his two career starts.

Washington State logged its seventh consecutive victory over Oregon State as a new coach and freshman quarterback opened their campus tenures in memorable fashion. Nick Rolovich became the first Cougars’ coach to earn a victory in his initial game on the sideline since Warren Powers in 1977.

In school history, Jayden de Laura became the first true freshman to start a season-opener and was the first freshman since Jeff Tuel (at Oregon, 2009) to call signals for the Cougars. The 6’0” and 195-pounder got off to a hot start with his maiden touchdown pass in the first quarter, a 29-yarder to Travell Harris. Throughout the game, he exhibited a strong arm and scrambling ability, completing 18 of 33 passes for 227 yards and rushing for 43 yards.

A scouting report from the coach: “Good arm strength, good understanding, good timing, good zone manipulation of defenders. Gets the ball out quick, has some accuracy, has some ability to make some plays off script. And his competitive nature. I think he came here for a reason,” Rolovich stated last week before the opening game of the 2020 campaign (cougcenter.com).

De Laura attended St. Louis high school in Honolulu, Hawaii, and led the team to two state championships. As a senior, he was named High School All-American by MaxPreps and Gatorade Hawaii Player of the Year. As a recruit, he netted four-stars by both Rivals.com and 247Sports.com.

I am always interested in Run and Shoot quarterbacks in college fantasy football, and Rolovich’s version manufactures fantasy luminaries behind center. There is no track record for de Laura and it may be a bumpy ride for the reminder of the 2020 campaign, but the risk is worth the reward down the stretch.

Identify the most impressive QB in the Pac-12 this weekend:

On Thursday night, I finished grading and turned on the Nevada game to scout quarterback Carson Strong and wide receiver Romeo Doubs. Throughout the contest, running back Toa Taua caught my eye, gaining 107 yards on 12 carries and scoring a touchdown. He also secured seven passes for 45 yards.

Both the Doak Walker and Paul Hornung award committees named Taua to its preseason watchlists. In the first two games, he looks like a worthy nomination. The junior piledriver has carried the ball 24 times for 192 yards and two scores.

In 2018, Taua earned Mountain West Freshman Offensive Player of the Year honors after rushing for 872 yards with six touchdowns. In 2019, he logged another 807 yards on 196 attempts with another six scores.

In 2020, the 5’9” and 210-pounder wanted to be an even better player and dedicated himself in the offseason to refining his skills. “I kind of started taking on my responsibilities, whether it was watching extra film or taking certain things upon myself to do what I needed to do,” Taua said before the season started (syvnews.com).

The Nevada offense is cooking, averaging 36 points and 511 yards per game. I want a piece of coordinator Matt Mumme’s air raid attack for the playoff stretch run. Taua provides CFF diehards a nice option to fortify their backfield depth late in the 2020 season.

A Kansas City native, White attended Mt. San Antonio Junior College in Sacramento, CA for his first two years out of high school. He primarily served as a backup in his freshman year, but excelled as a sophomore rushing for 1,264 yards, a 6.4 ypc. and 10 touchdowns in eleven games. He ranked second in the CCCAA in yards per game with 115. Clearly the JUCO standout matured in the two years since his high school recruitment and arrived in Tempe with a chip on his shoulder.

Entering fall camp, highly touted true freshman DeaMonte Trayanum was the favorite to start thanks to a standout set of abbreviated spring practices. However, when Arizona State took the field on Saturday, White and Trayanum split carries evenly with 12 apiece. Where White really distinguished himself was in the passing game, as he showcased his all-purpose skills by catching three passes for 70 yards and a 55-yard touchdown. Trayanum failed to catch a pass, but did rack up two touchdowns on the ground.

Coach Herm Edwards clearly prefers to lean on the run game, racking up 258 yards on the ground to just 134 in the air. I expect the running back combo of Trayanum and White to form a west-coast version of UNC’s Michael Carter and Javonte Williams. While Trayanum already owned at a 35% clip, White is available almost everywhere and worth a waiver scoop for teams in need of a boost at RB.

Who are you targeting at running back on the college fantasy football waiver wire this week?

The Hurricanes are a much better offensive unit with quarterback D’Eriq King calling the signals. Nevertheless, over the first four games of the campaign, none of the Miami receivers made a significant fantasy impact. The tide has now turned with Mike Harley’s performance over the past two games.

After a standout performance against the Cavaliers two weeks ago, Harley netted the ACC Receiver of the Week award. He recorded a career-high 10 passes for a career-best 170 yards with one touchdown.

Against the Wolfpack on Friday night, the speedster snatched the game-winning touchdown, scoring from 54 yards away, with less than three minutes remaining. “…then to have Mike Harley go for 153 and to make the play right there at the end, that’s what you want your seniors to do. You want them to make those plays. He’ll remember that for the rest of his life,” coach Manny Diaz stated after the game (miamihurricanes.com).

Over the past three weeks, Harley is the eleventh most-productive receiver with 18 catches for 323 yards and three touchdowns despite only playing in two games. King and the aerial assault is grooving, and Harley has become the prime downfield weapon. Grab the Hurricanes’ game-breaker now.

Back in June, I joined the CFF: On Campus podcast with my teammates Scott and John. On my very first episode, I was asked about my favorite sleepers for the upcoming season. The player I voiced my most vociferous excitement about was none other than budding superstar Travell Harris.

Since I had all-world quarterback Anthony Gordon on three of my CFF squads and lived on the west coast, I watched an unnatural amount Wazzou football. One of the fortunate byproducts of watching those games was getting to see Travell Harris grow on a game-by-game basis into a stellar wide receiver. The advanced stats back up the eyeball test, as Harris caught 47 of 58 passes, an 81% completion rate while dodging 17 tackles for an elite 36% broken tackle percentage and 8.2 yards after catch. All of these marks rank amongst the very top receivers in the country on a per catch basis.

New HC Nick Rolovich prefers to roll out his best four wide receivers and pound them with a bevy of targets, which is in stark contrast to Mike Leach and his wideout merry-go-round. Simply put, there was absolutely no way coach Rolo was going to sit Harris on the bench. As illustrated by his tenure at Hawaii and the 100-plus targets that were distributed amongst Hawaii’s top three wide receivers last year, Harris was in line for a heavy workload.

Saturday against Oregon State Harris caught seven-of-eight targets, a 88% catch rate, for 107 yards and two touchdowns. While I expected such production from Harris in the passing game, what I didn’t know was that the Wazzou staff intended to give Harris two carries for 49 yards and a 44-yard touchdown on the ground. I firmly believed that entering the season that Travell Harris was the best wide receiver in the country that nobody knew about. He’s 12% owned right now, do your CFF team a favor and pick him up off the college fantasy football waiver wire immediately.

There are still quality receivers on the waiver wire in CFF leagues: Who Ya Got in Week 11?

Make sure to also check out John’s College Fantasy Football Waiver Wire from last week to see if any of those players are available.