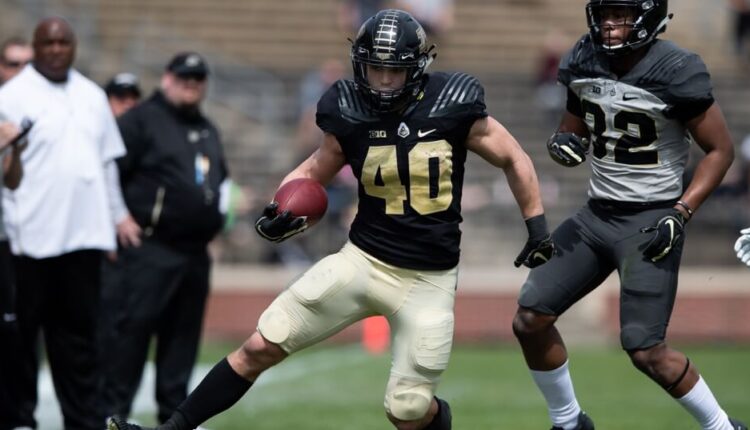 The Tagovailoa family must be one of the happiest in the nation. Tua earned the first start and victory of his NFL career against the Rams on Sunday, and Taulia led the Terrapins to an unexpected OT victory over Minnesota on Friday night. In school history, Maryland had never won after trailing by 17 points in the fourth quarter.

In the comeback, Taulia passed for 394 yards and three touchdowns while adding 64 yards on the ground with two touchdowns. He paced all CFF signal-callers in points scored with over 44. In the last 20 seasons, he was only the third Big Ten quarterback with 350 passing yards, three passing touchdowns and two rushing touchdowns in a game: The others were Dwayne Haskins (Ohio State, 2018) and Zak Kustok (Northwestern, 2001).

“He’s (Taulia) so smart in the pocket. He does a great job identifying pressures. He (is) a game manager, along with him just balling out in the passing game,” senior RB Jason Funk said after the come from behind thriller against Minnesota (washingtonpost.com).

At 5’11” and 205-pounds, the former four-star recruit lost the scuffle with Mac Jones for the starting assignment at Alabama and transferred to Maryland. During the summer, he was granted eligibility to play and named the starter after training camp. In two games, the sophomore has completed 66.7% of his passes for 488 yards and rushed for 48 yards on 11 attempts.

Maryland has a nice matchup at Illinois this weekend. Run to the waiver wire and place a healthy FAB bid on the Terrapin’s dual-threat star.

Clearly, Starkel enjoys pitching against New Mexico. As a Texas A&M redshirt freshman, he threw for 416 yards and four touchdowns against the Lobos. He now has five games in which he has passed for at least 300 yards: Texas A&M (2), Arkansas (2), and San José State (1).

In the first two games of the campaign, Starkel has posted a 7:1 TD:INT ratio, completed over 73% of his throws and compiled 693 passing yards, which are fantasy-worthy numbers.

A graduate student, the 6’3” and 214-pounder played for Arkansas last year and spent three seasons on the Texas A&M campus, including a redshirt campaign. In 2017, he put together his best crusade with 1,793 passing yards and 14 touchdowns for the Aggies. Before joining San Jose, Starkel played in 19 games with Texas A&M and Arkansas.

With Bailey Gaither and Tre Walker lining up at receiver, Starkel has an incredible playmaking duo to play pitch and catch with each week. Many college fantasy footballers need help at quarterback, and Starkel is a nice option on the waiver wire.

While millions of students quarantined at home after colleges closed campuses in the spring, Carson Strong made the most of an unprecedented and historic moment. He worked with his father to improve deep ball accuracy in order to excel in coordinator Matt Mumme’s air-raid scheme.

“It’s the number one thing I’ve been working on in quarantine with my dad. It was something I wanted to improve upon. I love making big plays, and I left a lot of yards on the field out there last year…I’m just going to get better at it, we can start hitting those consistently,” Strong stated (nevadasagebrush.com).

There is no denying the early results of Strong’s workouts and fortitude. In two games, he has averaged 9.7 yards per attempt, which is a noticeable improvement from last year.

The redshirt sophomore has scored over 50 fantasy points in the Wolf Packs’ two victories to open the season. He leads the Mountain West Conference in passing yards (770) and competition percentage (75.9%) and is second in touchdown passes (6) and passer rating (182.9).

In the CFF: On Campus listener league, I wanted an upgrade at quarterback this week and acquired the Nevada signal caller off the waiver wire to insert into my lineup. Will you join me and roll with Strong against the Aggies, who have surrendered 80 points in two games, on Thursday night?

Terrific options at quarterback on the waiver wire: Who Ya Got this week?

“Nick Starkel! LOVE the offense and since he has been around since the 90s, his experience gives him the nod.” @aceholesrule

Whenever I think about Purdue football, the great quarterbacks who wore the Black and Gold in West Lafayette, Indiana come to mind: Len Dawson, Bob Griese, Jim Everett, and Drew Brees. In recent seasons, the wide receivers have grabbed the headlines.

A walk-on who earned a scholarship, Zander Horvath packs a punch at 6’3” and 230-pounds. A two-time Academic All-Big Ten (2018 & 2019) honoree, Horvath illustrated his potential on the field in the final game last year versus Indiana with 164 rushing yards, two touchdowns, and four catches.

He has continued his dominance in 2020. To open the season, Horvath has rambled for 229 yards on 43 carries, snatched eight passes for 60 yards, and crossed the finished line once for the undefeated Boilermakers. The redshirt junior should not remain on the waiver wire any longer after scoring 27.5 and 15.4 fantasy points. Do not let opponents acquire a valuable asset this late in the fantasy season.

On Friday evening, I needed a cheap DFS option at running back in my lineup for the Saturday main slate. While researching, Keyon Henry-Brooks had a salary of $3,900, which is well below my threshold for a salary-saving ball carrier…Bazinga!

Against Mississippi, Henry-Brooks produced 25.5 fantasy points on 66 rushing yards, five receptions for 89 yards and a touchdown. In two games, the Commodores’ ball carrier has sauntered for 138 yards on 36 carries, secured nine passes for 110 yards, and scored twice.

A three-star recruit out of Georgia, he earned a varsity letter in football, track and field, and basketball in high school. Last year, Kenyon backed up Ke’Shawn Vaughn and totaled 309 yards from scrimmage and scored a touchdown.

He missed the first two games this season but has played well since entering the lineup. The 6’1” and 200-pounder could provide a fantasy boost to your team despite playing for winless Vanderbilt with Mississippi State, Florida, Tennessee, and Missouri on the schedule.

Let’s discuss the Heisman race with Trevor Lawrence out with COVID-19: After 9 weeks, who is the leader in the clubhouse?

“This is Justin Fields’ award to lose at this point.” @EdHug77

“Thank you for having Sam Ehlinger listed. Dude is carrying this team.” @lukebrofffb

“Zach Wilson is playing the game with style and grace. He gets my vote.” @aceholesrule

It is difficult not to watch Jahan Dotson’s impressive one-handed catch for a touchdown against the Buckeyes on Saturday night over and over on YouTube. I must have viewed it at least 20 times over the past 48 hours.

“I kind of have to practice that after practice. The coaches prohibit that at practices. It’s two hands every time you get an opportunity to catch the ball. I kind of practice that on the side…I got to show I was capable of doing it in a game today,” Dotson stated after the game (centredaily.com).

While the catch mesmerizes the observer, college fantasy footballers do not acquire a player based on highlight clips. It is the totality of past production and future potential opportunities that illuminate a potential pickup on the waiver wire.

Dotson fulfills both the aforementioned requirements to prioritize this week. In two games, he has logged 12 receptions for 238 yards and four touchdowns on 17 targets. The junior wideout is the alpha male in the Penn State aerial assault and will continue to be heavily targeted moving forward.

A four-star recruit by ESPN and Rivals, Dotson established high school team records with 187 receptions for 2,755 yards and 40 touchdowns. The 5’11” and 182-pounder was a three-year letterman and named First Team USA Today All-USA Pennsylvania Football Team.

As a sophomore last year, he secured 27 passes for 488 yards and five touchdowns and finished fifth in the Big Ten averaging 18.07 yards per catch. I made the mistake of benching Dotson this weekend against Ohio State and promise to keep in my starting lineup the rest of the season.

When Rashod Bateman opted out of playing over the summer, I immediately scanned the Minnesota depth chart to find the next man up. Chris Autman-Bell, who played behind Tyler Johnson and Bateman for two seasons, caught my attention. When the Big Ten announced that it would play in 2020, Bateman reversed course and decided to rejoin the program.

“When he (Bateman) came back, I can’t even talk about how happy I was. I’m glad I got my partner in crime back…It’s exciting. I can’t wait to get on the field with him on Saturday,” Autman-Bell stated two weeks ago (startribune.com).

With Bateman in uniform, how would Autman-Bell be deployed and how many targets would he see? In the opening game against Michigan, the junior home run hitter only had two targets and one catch for 45 yards. Against Maryland, Tanner Morgan targeted Autman-Bell five times, and he secured four passes for 122 yards and a touchdown. On five receptions, the Golden Gophers’ playmaker averages a whopping 31.4 yards per catch.

At 6’1” and 215-pounds, Autman-Bell initially committed to Western Michigan with coach P.J. Fleck but changed his mind when Minnesota hired the former Broncos’ coach. Nicknamed Crab, Autman Bell was a consensus three-star prospect in high school and redshirted his first year on campus in 2017.

In his first two seasons, he secured 56 passes for 820 yards and five touchdowns. College fantasy footballers have a little more clarity on Autman-Bells usage, role and production this season, and he is a worthy candidate to add onto CFF rosters.

After nine weeks, identify the surprise team in college football?

“It has to be Coastal Football, right?” @5yardcollege

“All great choices, but Coastal Carolina is the right call. I think with QB McCall at the helm, they will be great next season as well.” @aceholesrule