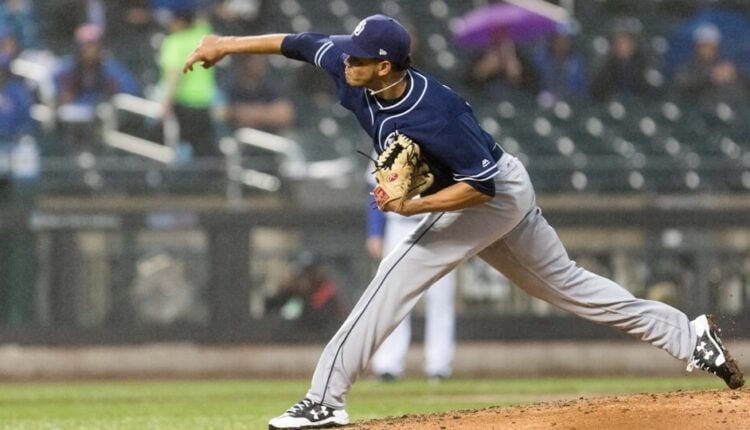 The MLB Offseason news has already started churning as the White Sox turned back the clock and brought back Tony LaRussa after a short 35 years apart. But today, I want to continue digging into positive and negative aspects of certain players’ 2020 seasons. In a season in which a global pandemic was occurring and we only had 60 games of data, it is incredibly hard to make assessments about players and their performances, and that includes Dinelson Lamet, who I’ll be looking at in this article.

This offseason, I’ll be doing a series of articles looking at what went right, what went wrong, and the overall 2021 outlook for certain players. I can only take into account the data that has been given and use that to best assess what to expect from each player in 2021. This should be fun! Let’s dive into our next player in this series: Dinelson Lamet.

What Went Right for Dinelson Lamet in 2020

The Best Pitch in Baseball

I know what you’re thinking. Mendy, stop drinking and get serious. I’m actually very serious. Lamet allowed just 10 hits in 125 at-bats in 2020, which is equivalent to a .080 BA.  His xBA supported this as well as it was still a meager .097. This pitch also carried a tiny .162 xSLG and xwOBA, while maintaining a good exit velocity of 85 mph and an AWESOME 47.4% whiff rate. It also carried a 19.7 pval value and a -19 run value. Both were tops in baseball.

All these metrics were even better than his 2019 slider data, which was already elite to begin with. While the horizontal movement, spin rate, and mph roughly all stayed the same from 2019-2020, he did slightly increase his vertical movement on the pitch. The main reason it seems for the increased success is his jump in usage. Lamet jumping from a 12% usage to a 53% usage seems to have made the pitch even more effective.

Lamet also increased the zone rate on his slider from 40.6% in 2019 to 46.4% in 2020. The threat of it being called for a strike increasing this season only made Lamet more unhittable against this pitch. This also could have helped contribute to the lower walk rate which we’ll get to next.

In order for a pitcher to be truly elite, they need to keep their walks low while they maintain a high strikeout percentage. Lamet accumulated the lowest walk rate of his short career thus far in 2020 at 7.5%. While it is a small sample size, let us not forget he pitched nearly the exact same amount of innings in 2020 (73 in 2019 and 69 in 2020) and lowered it 2%. That is a combination of his increase in zone percentage and a career-high in O-Swing percentage (hitters swinging outside the zone).

Lamet was able to decrease his walks while keeping up his elite strikeout rate. His elite strikeout percentage actually went up from top 7% of the league in 2019 to top 6% in 2020 at nearly 35%. Lamet also slightly upped his swinging strike percentage and still maintained 12 K/9. This dangerous combo is the result of a pitcher having better control of the zone to get ahead in the count. This is evident by his 3rd consecutive year of increased 1st pitch strike percentage, which results in Lamet using his best stuff to get strike hitters out on a consistent basis.

Kept the Ball in the Park

When you have a pitcher that throws as hard as Dinelson Lamet does, it’s important to keep the ball in the yard as much as possible. Lamet lowered his line drive rate by nearly 7% while slightly upping his ground-ball percentage as well.  Lamet in his 3 seasons has gone from 1.42, 1.48, and this year to a drastic decline of 0.65 HR/9.  The number of home runs Lamet allowed in 2019 compared to 2020 went from 12 home runs to 5. This was again, in only 4 fewer IP.

Lamet allowed harder contact this season, but that does not always tell the tale. With the decreased line drive percentage and increase in ground-ball percentage, that ball could just be hit hard into the ground. This also paints a picture for us as Lamet’s HR/FB rate went down from 19.7% in 2019 to 7.9% in 2020. A drastic decrease. If Lamet can keep up these changes, it will add to his case of being among the league’s elite pitchers when healthy.

Reliance on One Pitch

Maybe Lamet believes in the saying, “If you don’t use it, you lose it.” That was the case with his slider as he used it a WHOPPING 53% of the time. For comparison, Patrick Corbin was the next highest qualified starter (minimum 100 PA) at 40%. Corbin is the perfect example of the successes and failures that come when a pitcher relies too much on one pitch. There can be dominant years as Corbin has shown in the past. We also see what can happen as we did in 2020, when that one pitch that’s relied so heavy upon becomes ineffective.

This also can be a problem when you see how ineffective his second most used pitch aka his fastball is. Lamet had roughly the same usage of his fastball the last two years and has achieved an xBA in the .280’s and xSLG’s of .439 and over. He also is not getting very many whiffs off of it as he has had an 18.6% whiff rate each of the last two years. The numbers comparison of a 20 slider pval compared to a 2.2 fastball pval shows the real difference between his two best offerings.

Lamet had a GREAT curve that he threw in 2019 that almost acted as a second slider. This led to great success and great numbers against this pitch. With a largely ineffective 3rd pitch this season (His sinker at a .293 xBA), if Lamet were to reintroduce this curveball and decrease the usage of his fastball a little more, we may see an even more successful Dinelson Lamet.

Lamet had a right bicep injury that put a major damper on his incredible 2020 season. Lamet had looked durable until his last start and then things started to crash and ultimately shattered the Padres chances of advancing in the playoffs.

According to the San Diego Union-Tribune, Lamet started receiving “platelet-rich plasma injections”  on his injured elbow at the end of the 2020 season. This is primarily to reduce pain but a big part of this treatment is rest. Unfortunately, Doctors have found that rest alone won’t naturally repair the damaged tendons but this process can aid in facilitating the repair of these tendons.

Skeptical if this process actually works? You’re not alone. Look no further than his teammate in 2020 Garrett Richards, who underwent a similar procedure in 2016. The result was a delayed Tommy John and then he became a project in San Diego. This feels like delaying an eventual surgical procedure that could affect the start of the 2021 season for Lamet.

Let us not forget that Lamet is also the same pitcher who had Tommy John surgery in 2018 and missed all but 10 starts in 2019. The injuries are something that HAVE to be strongly considered when drafting Lamet for your fantasy team.

One thing we all know about Dinelson Lamet is that he does not go deep into games. That was the case in 2020 as Lamet averaged 5.75 IP this season. In fact, Lamet has not averaged 6 IP per start in a season in his big league career. Lamet in his three big league seasons has pitched 114, 73, and 69 innings.

Dinelson Lamet has never pitched above 114 big league innings and has not gone over 73 in each of the last few seasons. Even with a 50-60 IP bump which is about average for most pitchers, that would still only leave Lamet at between 120-130 IP in 2021. That is of course, barring injury which has been a big part of his past. It can become a hard decision drafting Lamet at his current price with the hard-capped ceiling he currently presents with his inability to go deep into games and go 150 or more innings. This is evident with his 13 wins total in his three big league seasons.

Outlook for Dinelson Lamet in 2021

When drafting Lamet, it is going to be important to determine the risk/reward ratio when selecting a pitcher of his checkered past. Lamet is capable of a 7 IP and 12 K game easily but he’s also capable of going 5 IP 80% of his starts and hitting the IL for multiple stints.

Lamet is currently going as the 19th pitcher off the board at around a 53 ADP according to the 2EarlyMocks. That is just ahead of Max Fried, Sonny Gray, Mike Clevinger, Carlos Carrasco, Sixto Sanchez, and Zach Plesac. With pitchers like this around Lamet, it will be important to consider how you’ve built your rotation and if you can afford to gamble with drafting Lamet here.

If Lamet is either your first or second pitcher, I would not risk drafting him at this spot. If his ADP slides down to closer to 75-80, I would be a lot more comfortable drafting him there. Lamet has made a lot of amazing strides but still strictly relies on one pitch and has a horrible injury history. For those reasons, I would stay away from drafting Lamet unless his cost goes down.