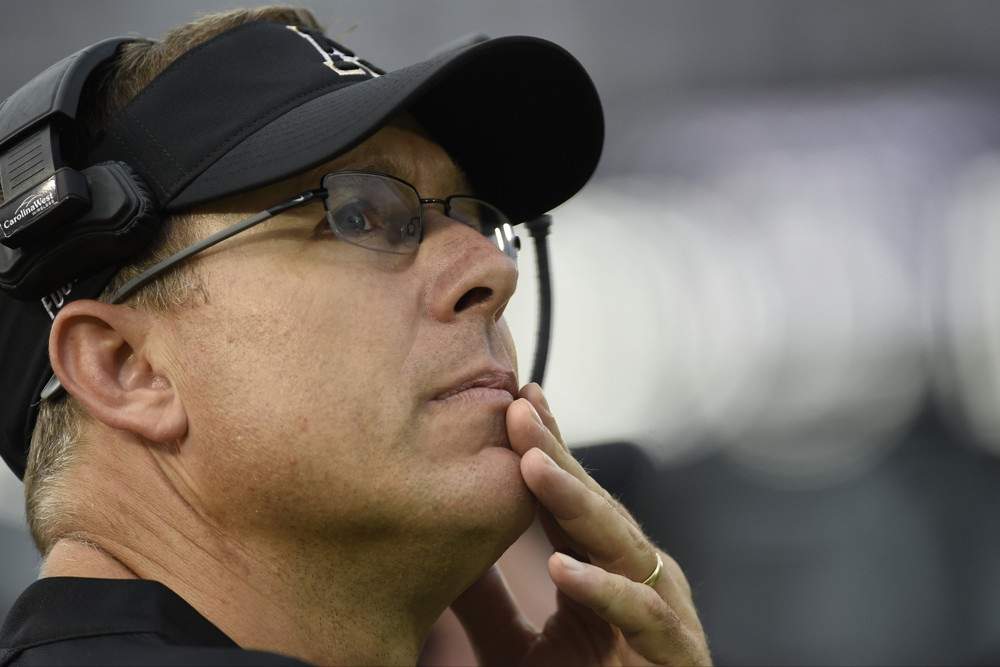 Ah, Spring Time. The flowers are in bloom, March Madness is in full swing (I’ve got Duke winning if you’re curious), and Spring Games that will change the landscape of the 2019 College Fantasy Football season are on deck in April.

Spring Games give us the opportunity to evaluate some bigger names and give us something to talk about. Last season it was Adrian Martinez and Jace Sternberger who popped up. They also provide opportunities for us to see who will take over some of the bigger fantasy roles in the upcoming season. Here are some of my predictions for those higher profile fantasy battles this Spring.

So this one may not be the most unsettled battle but it’s definitely one to monitor. Oklahoma’s offense has featured prolific passers over the past couple seasons and Jalen Hurts is not that. Hurts’ running ability is very running back like but he doesn’t have the arm of Mordecai or Rattler. If Coach Riley decides that Hurts’ running isn’t enough, a change could be made to the top quarterback from the 2019 class sooner rather than later.

Prediction: Hurts will play as the starter for the season. Lincoln Riley knows how to use different skill sets and succeed.

It’s a bit of a crowded quarterback room in Tempe, Arizona. The man who has the first chance of claiming this one is Dillon Sterling-Cole who played as the backup for Manny Wilkins over his career. Arizona State also brings in three blue-chip quarterbacks in the 2019 class in Jayden Daniels, Joey Yellen, and Ethan Long, two of which were the highest rated at the position that the Sun Devils have brought in. Walding is a former walk-on who pushed Sterling-Cole for the backup quarterback role last season and is a dark horse to land the job but a name worth mentioning.

Prediction: Sorry Sterling-Cole, Jayden Daniels is too much of a stud to waste a year of his eligibility.

Jarrett Stidham didn’t quite live up to expectations after leaving Baylor and that’s partly due to scheme fit and partly due to an awful offensive line. With Stidham gone the Tigers are looking at 2018 backup quarterback Malik Willis and the No. 2 quarterback from the 2019 class Bo Nix. Right now, Willis is working as the starter and has been likened to former-Auburn quarterback Nick Marshall. Bo Nix is the best quarterback recruit ever to come out of Alabama and won’t need two years to fine tune his passing ability.

Prediction: Malik Willis will start off as the guy but Bo Nix steals the show early in the season.

I’m just going to come right out and say that Perry won’t win the job. He had his shot last year and proved that he wasn’t that much better than Malik Rosier and he can’t seem to stay out of trouble. Jarren Williams was a good bet to win out despite never really receiving a shot last season. Willaims does many things well; throws a good ball, runs well, reads defenses well. But, the name that has everyone buzzing is Tate Martell. Martell transferred out of Ohio State after Justin Fields joined after leaving Georgia. Martell is very mobile and has a good arm to complement that. Can Martell prove that he can succeed outside of Columbus?

Oklahoma State is a huge farm school for fantasy quarterbacks and this year they face a similar task as they did a season ago. Taylor Cornelius did a fair job as the guy and this season we will see Hawai’i-transfer Dru Brown and redshirt-freshman Spencer Sanders battle it out. Dru Brown looked incredible as the guy in a non-run and shoot system at Hawai’i. He finished up with 5,000+ yards in two seasons as the starter with 37 touchdowns. Spencer Sanders was said to have had the tightest spiral in the 2018 class and has some dual-threat abilities of his own.

Prediction: I’m going to go with Brown on this one due to experience but I’m aiming to draft both of them if a starter isn’t announced by week one.

With Tua Tagovailoa throwing the ball it almost doesn’t matter who takes over at running back but I can’t not address this position battle. Alabama running backs have been a staple in the fantasy game for a while now and the first name to bring up is Najee Harris. Harris has been on breakout lists for years now and this is finally going to be his year to at least see first-team reps. Trey Sanders was the top back in this past class and will likely see second-string duties in Alabama’s running back rotation. Robinson is an absolute bruiser of a back and just has the look of an Alabama running back with how aggressive he runs.

Prediction: Alabama doesn’t usually ignore seniority in the backfield. We will likely see all three guys play with Harris leading the way, Robinson on third downs, and Sanders picking up playing time more and more every week.

USC is a far better team when they have an effective runner. Last season’s committee of backs just wasn’t working and they need someone to step up. Carr is the most high profile of the backs but he hasn’t been able to stay healthy. Malapeai just doesn’t bring that explosiveness to the table that Carr or Stepp have. Stepp is a strong runner but we haven’t seen him play much given that he redshirted last season.

Prediction: Either Carr stays healthy and takes over or USC goes back to the committee.

Penn State has a plethora of options in 2019 after losing Miles Sanders. Ricky Slade saw significant time last season behind Sanders and looked to be the next man up. But then you have to give Journey Brown a look. Brown was a high school sprinter and needed to round a few things out before taking the next step. Brown appears to have gained some ground on the position over the offseason as he skills have fallen into place. Then you have to account the recent additions of Noah Cain and Devyn Ford who both enter in as highly ranked recruits from the 2019 class. And lastly, but certainly not least, is the Notre Dame transfer CJ Holmes who walked-on at Penn State following his dismissal from the Irish.

Prediction: I’m a huge fan of Ricky Slade but I’m continually reading that Journey Brown is a favorite to take home the job.

Michigan’s backfield was an intriguing talking point this offseason. Karan Higdon’s departure left the door open for Chris Evans to take over but Evans appears to no longer be a part of the football program in Ann Arbor. Tru Wilson and O’Maury Samuels both saw time last season but didn’t really show flashes of greatness to come. The player that has shown that is Zach Charbonnet. Although Charbonnet is a leg behind due to a spring injury, he has that big play ability that the other two just don’t have and could immediately see time in the Maize and Blue uniform. (Insert pun about Charbonnet playing A-Maize-Ing football).

This shouldn’t be a storyline but it is. Maurice Washington appears to be in legal trouble which could hinder his season. If Washington can’t go, Juco-Transfer Dedrick Mills is up and ready to roll in his place. Mills was the main back for Georgia Tech in his time there and topped 1,000 yards in Junior College. Wandale Robinson is the top-rated All-Purpose Back from the 2019 class and is the future of the program if Washington is dismissed from the program.

Prediction: It’s the Dedrick Mills show if Washington is out.

I’m just going to come out and say that Elijah Moore and Braylon Sanders already have the top two receiving spots. Ole Miss receivers are fantasy studs under Matt Luke and Matt Corral will help keep the production rolling this season. The third receiving spot will feature Jonathan Mingo, Dannis Jackson, and Dontario Drummond. Mingo and Jackson are the two more highly touted recruits from the 2019 class but Dontario Drummond is coming off of a huge season at East Mississippi C.C. where he caught 58 passes for 857 yards and 11 scores.

Prediction: The three guys split time at the last receiving spot with Drummond winning out in the long run due to his experience and explosive ball skills.

Texas has one of my favorite quarterbacks returning in Sam Ehlinger and appears to have righted the ship after having a down few years. Lil’Jordan Humphrey’s early departure has opened up a spot for someone to break out in 2019. The best option of the three is Bru McCoy who transferred over from USC after Kliff Kingsbury bolted to the NFL. McCoy has all the skills to be a stud in his first season but needs to be cleared by the NCAA. Jordan Whittingham is a human highlight real waiting to happen when he has the ball in his hands with his running back like abilities on the ground. Jake Smith has elite speed and is an ideal fit for a slot receiver. Moore was once a top-100 recruit who has fallen by the wayside ad Humphrey and Collin Johnson have succeeded.

Prediction: Bru McCoy is the future of the program and should take that spot over. If he’s not eligible, I expect Smith to take that spot and Whittingham to work out at running back.

It’s hard to know what Texas Tech’s offense is going to look like given the change in coach. The days of the Air Raid are over and even though I’m still sold on Alan Bowman being a stud under Matt Wells, it’s hard to say the same thing about the receiving corps. The receivers at Tech that can say have a chance at contributing this year are listed above. Collins doesn’t seem to want to graduate as he’s in his fifth or sixth year of eligibility. Vasher was expected to be the guy by many last year but quickly fell by the wayside behind Antoine Wesley’s dominance at the position. Carter had a minimal role in the Red Raider offense last season and finished with less than 10 yards per reception. Lastly, Mannix transferred over from Nevada and left there with the potential to break school records in career receiving yards. His transfer to Texas Tech would’ve been huge for Mannix but his stock has since dropped due to the firing of Kliff Kingsbury.

Prediction: I like Mannix and Vasher to see the bulk of the receptions. We just need to watch some Spring football and see if that means anything for fantasy football.

Ugh, more turnover at receiver at Colorado State combined with transfers makes predicting Colorado State that much more difficult. Last season Preston Williams won out over Jackson and Olabisi Johnson and this season was supposed to be Jackson’s year. Enter Auburn-transfer Nate Craig-Myers. Although Craig-Myers was lost in the shuffle at Auburn, he’s undoubtedly coming to Colorado State for playing time.

Prediction: Jackson’s time has come. It just has to be Warren Jackson O’Clock.