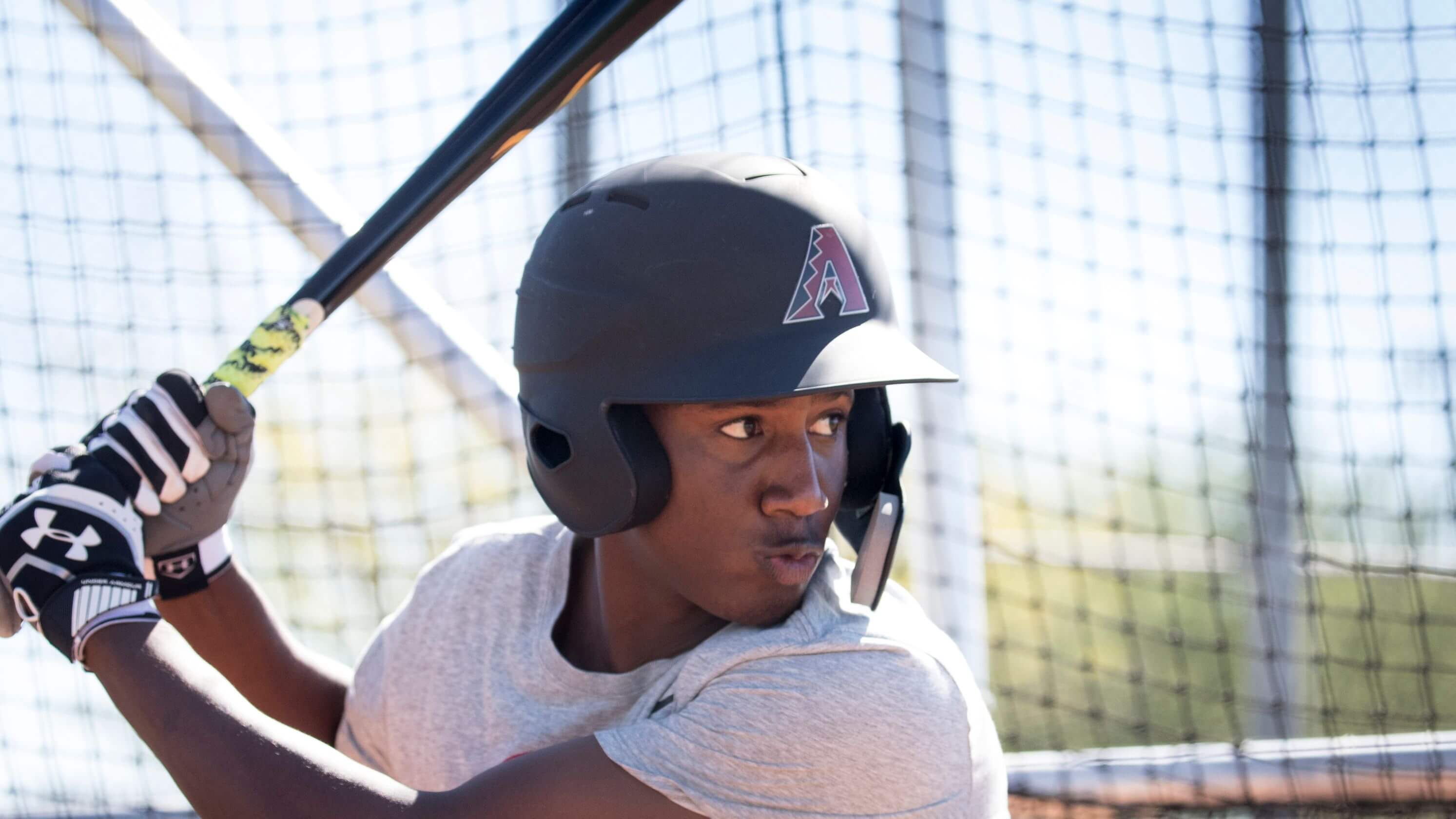 One of the many joys of dynasty leagues and discussing MLB prospects is the “what if” game. What if this prospect breaks out and becomes elite? What if this top prospect falls flat on their face? So many “what ifs” with prospects. But that’s what makes prospects so damn intriguing. We never 100% know what is going to happen. We do our best to watch, analyze, and project how we think certain prospects are going to perform in the future and try to grab the guys in our dynasty leagues that we think are going to be valued higher in the future. Everyone loves a good breakout prospect and that’s what I’m looking at today.

Now, let me preface by saying that these aren’t necessarily all going to be “sleeper prospects” or unknown guys. That’s an article for another day. Some on this list will be lower prospects while others will be known prospects that I believe are in for a big jump up the rankings in 2019. A few names you see and think, “Hey, this guy has already broken out.” That may be true, but is the breakout and ascent up prospect rankings over for that player? If they’re listed below, I believe the answer to that is no.

Basically, this article is looking to identify players to target now in dynasty leagues before their price tag goes up. When compiling my master list of these players, I came up with so many that I needed to break it up by MLB division or else this article would take you three hours to read. And nobody wants that. So, first up we have the NL West. A division with the deepest farm system in baseball (San Diego) and plenty of rising talent.

One of my favorite players from the 2018 FYPD crop is Alek Thomas, a man with “future leadoff hitter” written all over him. With plus contact skills, speed, and an advanced plate approach, he’s a prep bat I expect to move rather quickly. I said back in my Diamondbacks top-25 that Thomas would be the D-Backs leadoff hitter by 2023. That timeframe might have been a little generous too. There’s not a ton of power projection here, but that’s okay. Thomas has the upside to hit .300-plus with an OBP close to .400 while swiping 30 bags in a season. Currently a little outside my top-100, Thomas has the upside to push for top-50 status with a strong season in Single-A.

As of now, the carrying tools for Geraldo Perdomo are his defense at short and his strong throwing arm. But it’s quickly become obvious that Perdomo can handle the lumber as well. Through his first 425 minor league at-bats, Perdomo has a .280/.423/.372/.795 slash line with 40 steals and more walks (99) than strikeouts (81). As a switch-hitter, Perdomo has shown a good feel for hitting from both sides with a solid approach. While the power might never be more than 10-15 HR annually, the upside to hit for average with 25+ steals should have him shooting up prospect rankings over the next year or so.

I’ll admit, I’m one of the highest in the industry on Lavigne, and potentially the highest overall. But if I continue to babble about why Lavigne is a future offensive monster, maybe more people will hop on the bandwagon with me. Come on board, I don’t bite. We have heated seats up here and everything. One way I’ve described Lavigne is “Paul Goldschmidt-Lite.” That should be enough to get even the grumpiest of people excited. Average, power, SPEED (for a first baseman), it’s all there.

Lavigne dominated rookie ball last season, flashing all those aforementioned tools and an advanced plate approach to go along with it. While I don’t expect much more than 10-15 steals annually from him longterm, Lavigne has the contact skills and raw power to hit .300 with 30 homers. A year from now, Lavigne has a strong chance of becoming the top first base prospect in the minors.

When talking about Diaz, it’s all about the elite speed upside. Don’t even try to extrapolate that stolen base total out over a full season cause your brain might sizzle when it sees the number. He wasn’t a candidate to make my top-250, but could be in the running next spring if he continues to hit and steal bases at a high clip. You can basically get him for free in dynasty leagues as he’s still a relative unknown, nowhere to be seen on MLB/Baseball America lists.

A 20-year-old dominating rookie ball does not make this list due to his stats. While impressive, Decolati’s raw tools are what make him a prospect to target in dynasty leagues. There are some questions about his hit tool moving forward, Decolati has shown average to above-average raw power and speed and has immense athleticism. That athleticism allowed him to transition rather easily to the outfield which is a plus due to the logjam Colorado already has in the infield.

There are a lot of intriguing names on this list, but the one that might shoot up more than all the rest is Miguel Vargas. At 6’3 and 200 pounds, Vargas packs a punch at the plate with his plus raw power standing out the most. You’ll hear scouts talk about when they hear “the sound” when a ball comes off a bat. Well, Vargas is a player that can generate that sound. Loud contact is a regularity with Vargas and 25 homers annually is realistic down the road with a solid batting average to go with it. To fully tap into that power though, he’ll need to change up his approach a little and add some loft.

He’s not a lock to stay at the hot corner, but Vargas’ potent bat will play just fine at 1B as well. Once he starts climbing the ladder into high-A and Double-A, the name Vargas will be more and more common on prospect rankings. I already have him at 235 and would rule out Vargas pushing the top 100 with a strong season in 2019.

At first glance, the stats for Tirso Ornelas in 2018 don’t exactly jump off the page at you. But when you watch Ornelas at the plate or in the cage, the upside is immediately noticeable. You also have to be impressed with how he held his own in full-season Single-A last season as an 18-year-old. The time is now to buy Ornelas stock in dynasty leagues. With an advanced plate approach, above-average contact skills, and plus raw power, it’s only a matter of time before Ornelas shoots way up rankings, potentially into the top-100 next spring.

We all know about how great Luis Patino is by now. Back to back dominant seasons in the low minors tends to get people’s attention. Now 139.1 innings into his professional career, Patino has posted a 2.20 ERA, 1.08 WHIP, 2.7 BB/9, and 10.1 K/9 while pitching the entire 2018 season as a 18-year-old in the Single-A Midwest League. Patino’s fastball and slider already grade as plus and his curve and changeup, while a little behind, both have above-average or better potential. Mix in solid command and clean mechanics and you have a top-5 pitching prospect and top-25 overall prospect waiting to happen. The price on Patino is already fairly high, but if you want him on your dynasty squad, this will likely be the last chance to grab him before his price reaches ace levels.

In addition to having a fun name to say, Tucupita Marcano, is turning into a fun prospect to own in dynasty leagues. Though there’s not much power, the contact skills are strong and Marcano has shown an advanced approach at the plate, striking out in only 6.8% of his plate appearances in 2018. It’s hard to say where he fits into the middle infield logjam in this organization, but he’s still a couple of years away. So for now, enjoy the .280/25 upside and worry about where he plays down the road.

Big fastball, big command issues. Those five words sum up Andres Munoz pretty damn well. He’ll run it up into the mid to upper-90’s with regularity, touching triple-digits at times, but has struggled with his command and developing a reliable secondary offering. His slider has flashed above-average to plus at times, but the command will need to improve. If it does, we could be looking at the future closer of the San Diego Padres. Definitely one to monitor in dynasty leagues.

Zero. That’s how many professional at-bats Marco Luciano has under his belt so far. Now onto the next number… 22. If you’ll look below for me, you’ll see where that 22 comes from. And don’t mind the two Michael Kopechs.

The tools here are so robust, I already am projecting him as a top-25 prospect as soon as next season. The bat speed is explosive, yet controlled, and Luciano is able to generate plenty of hard contact and natural loft in his swing without selling out for power. Obviously, he’s still a few years away, but this type of offensive talent deserves the lofty ranking I’m projecting for him in 2020.

As a whole, the San Francisco Giants system makes most run away screaming in terror. And rightfully so. But at least they had some promising signings in the 2018 J2 period with Luciano and Jairo Pomares. Luciano is obviously the big name, but don’t sleep on Pomares in dynasty leagues. The tools are sound, especially his hit tool and speed, and there’s some developing power here as well. Not many have Pomares on their radar at the moment, but by this time next season, I have a strong feeling that will change.

Emerging from the quiet 2017 J2 period for the Giants, Toribio has a chance to become an above-average offensive contributor at the hot corner. During his pro debut, Toribio hit for above-average power while displaying patience at the plate which led to an 18.6% walk rate. He’ll need to add some loft to his swing to fully maximize his raw power, and if he does so, expect to see Toribio much higher on prospect lists 12 months from now, maybe even in my top-250.