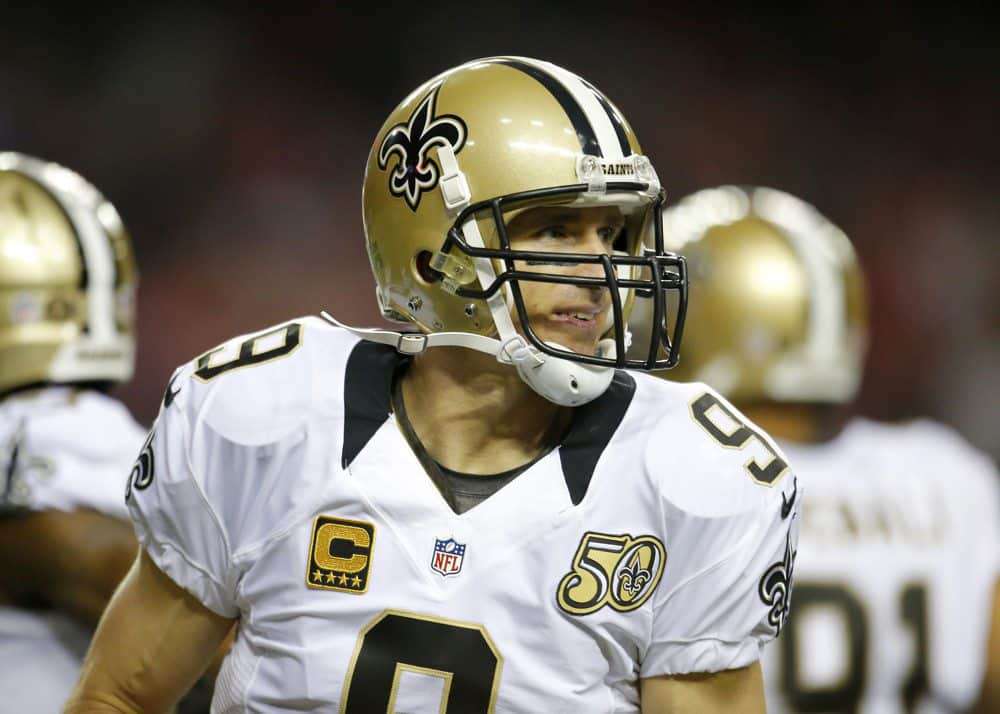 In fantasy football, you have to look for a quarterback that is consistent week to week. You don’t want to be stuck with the guy who lights it up one week and follows it up with a 175-yard passing game with zero TD passes and three interceptions. With that in mind, here are the guys I would draft to be my starting fantasy quarterback.

1. Matt Ryan, Atlanta Falcons – Ryan had a truly breakout season in 2016, as he was the NFL’s MVP.  There is no reason to think he’s going to slow down in 2017, as all of his impressive weapons return. Ryan threw for over 300 yards six times last year, including one game where he threw for over 500 yards. He also had an amazing seven games in which he threw three or more TD passes.  The thing that really impressed me about Ryan in 2016 was that he didn’t have a single game in which he threw for fewer than 200 yards, he had no games without a TD pass, and he didn’t have multiple interceptions in any game.  He is the No. 1 QB heading into the 2017 season as far as fantasy football is concerned.

2. Tom Brady, New England Patriots – Brady took all of his frustrations out on the NFL hierarchy after he came back from his four-game suspension due to DeflateGate.  Brady had no rust when he was eligible to play in Week 5 against the Cleveland Browns.  Brady had an amazing seven games with three or more TD passes in his 12 starts. He also had five games with more than 300 yards passing, with over 400 yards in two of them.  Brady did have two clunker games with zero TD passes and one game where he threw for under 200 yards, but that is really just nitpicking.  Brady has a couple of new toys this year in running back Mike Gillislee and wide receiver Brandin Cooks, so look for him to have another outstanding year in 2017.

[the_ad id=”384″]3. Aaron Rodgers, Green Bay Packers – Rodgers got off to a slow start in 2016, but he finished the season really well. He threw three or more TD passes in half of his games (eight of them) and had 300 or more yards passing six times. He did have some subpar games last year, as he threw multiple interceptions on two separate occasions.  He also had one game of under 200 yards passing and one game with no TD passes.  The good news is that the Packers signed tight ends Martellus Bennett and Lance Kendricks as free agents over the offseason, which will give Rodgers even more options in the passing game.  Look for Rodgers to have a monster season in 2017.

4. Drew Brees, New Orleans Saints – Brees keeps evading Father Time! He was amazing once again last year with 10 games of 300 or more yards passing, including over 400 yards in two of them.  He also had eight games in which he threw three or more TD passes.  Brees did have two games with zero TD passes and four games with multiple interceptions, so he was far from perfect.  That being said, he didn’t have any games with fewer than 200 yards passing last year.  The Saints signed Adrian Peterson and drafted Alvin Kamara, but don’t let that fool you.  The Saints aren’t going to turn into a run-first team overnight.  Look for Brees to have another banner year throwing the ball down the field to wide receivers Mike Thomas, Willie Snead, Ted Ginn and Brandon Coleman.

5. Andrew Luck, Indianapolis Colts – Luck had shoulder surgery last January, so keep an eye on him in training camp.  If he is healthy, he still is going to be a top-level fantasy QB in 2017.  Luck’s style of play mirrors that of Ben Roethlisberger, as they are both big guys who like to buy time in the pocket and throw the ball deep.  The only problem with that is that they both take a lot of big hits.  Luck stayed healthy enough to start all 16 games for the Colts last year.  He had five games with over 300 yards passing and three games with three or more TD passes.  Luck was pretty consistent last year with only one game with under 200 yards passing and no games without a TD pass.  He did have three games with multiple interceptions last year, so he needs to clean that up.  The Colts are loaded with fast wide receivers in T.Y. Hilton, Donte Moncrief and Phillip Dorsett, so look for Luck to continue throwing the ball deep quite a bit in 2017.

6. Derek Carr, Oakland Raiders – Carr was in the midst of a true breakout campaign in 2016 when a broken leg ended his season right before the playoffs.  He should be healthy and ready to rock in 2017.  Carr had six games with more than 300 yards passing, including one 500-yard effort.  He also had five games last year with three or more TD passes for the Raiders.  He is capable of carrying your team on any given week.  Carr did have a few clunkers, as he had three games with under 200 yards passing and two games without a TD pass.  However, he didn’t compound those problems, as he didn’t have any games with more than one interception last year.  Carr has two elite wide receivers in Amari Cooper and Michael Crabtree to throw to again in 2017.  The Raiders also signed TE Jared Cook as a free agent to give them another weapon in the passing game.  All systems are go for Carr in 2017.

7. Kirk Cousins, Washington Redskins – Cousins is coming off another outstanding season for the Redskins.  He had six games with 300 or more yards passing last year and three games with three or more TD passes!  However, he did have some clunkers.  He had two games without any TD passes, two games with multiple interceptions and one game with under 200 yards passing in 2016.  With DeSean Jackson and Pierre Garcon both leaving via free agency, the Redskins (and Cousins) better hope that Terrelle Pryor (a free agent signing) and second-year WR Josh Doctson are ready and capable to take their places.  That being said, WR Jamison Crowder and TEs Jordan Reed and Vernon Davis are back for 2017.  I look for Cousins to have another rock-solid year in 2017.

8. Philip Rivers, San Diego Chargers – Rivers tried to do too much last year for the Chargers.  The results were some stunningly good games and a few clunkers.  He threw for over 300 yards six times last year, and he had four games with at least three TD passes.  His biggest issue last year was the interception, as he had six games with multiple interceptions.  Rivers had one game with under 200 yards passing and one game in which he didn’t throw any TD passes.  Look out this year, as the Chargers drafted a wide receiver in the first round (Mike Williams) and took some offensive linemen to protect him in 2017 and beyond.  WRs Keenan Allen, Mike Williams, Tyrell Williams, Travis Benjamin and TEs Hunter Henry and Antonio Gates give Rivers a ton of good options to throw to whenever he drops back to pass.  You heard it here first: Philip Rivers is going to have a great year in 2017.

9. Carson Palmer, Arizona Cardinals – Palmer quietly had a pretty good season in 2016.  He had six games with 300 or more yards passing and four games with three or more TD passes in 2016.  He wasn’t without some clunkers, though, as he had two games with under 200 yards passing, two games without a TD pass, and four games with more than one interception last year.  Palmer has an excellent running back in David Johnson.  Johnson is not only a great runner, but he is a outstanding receiver out of the backfield.  Larry Fitzgerald is back with his outstanding set of hands.  WRs  J.J. Nelson and John Brown both have the speed to get deep and make big plays any time Palmer looks their way.  I look for Palmer to have another big year for the Cardinals in 2017.

10. Ben Roethlisberger, Pittsburgh Steelers -Roethlisberger contemplated retiring in the offseason, but to almost no one’s surprise, he’s back for another season.  Roethlisberger started 14 games last year and had three or more TD passes in half of them.  He also threw for over 300 yards four times last year, with over 400 yards passing once.  He did have more clunkers than usual in 2016, though.  He had four games with multiple interceptions, two games with under 200 yards passing and three games without a TD pass in 2016.  The Steelers probably have the best wide receiver in the NFL in Antonio Brown, and running back Le’Veon Bell is arguably the best RB in football.  Bell catches the ball well out of the backfield in addition to being a tremendous runner.  Roethlisberger is in line for another big year in 2017.  If you draft Roethlisberger, make sure you also draft a solid backup, as he has played all 16 games just three times so far in his NFL career.

11. Matthew Stafford, Detroit Lions – Stafford runs hot and cold.  When he’s hot, he can carry your team.  He had four games with more than 300 yards passing and four games with three or more TD passes in 2016.  However, he also had an amazingly awful four games in which he failed to throw a single TD pass.  He also had one game with fewer than 200 yards passing and two games with multiple interceptions.  The Lions didn’t fix the running game in the offseason, so look for Stafford to fill the air with footballs again in 2017.  A lot of people thought Stafford would fall off production-wise following the retirement of Calvin Johnson, but he looked even more effective in spreading the ball around last year.  Look for Stafford to have another big year in 2017.

12. Sam Bradford, Minnesota Vikings – This is the name that really doesn’t fit here, right?  Wrong!  Bradford completed an NFL record 71.6 percent of his passes last year with 3,877 passing yards, 20 TD passes and only five interceptions.  He had only two games with over 300 yards passing and two games with three or more TD passes in 2016.  However, he also had only two games with fewer than 200 yards passing, two games without a TD pass and no games with multiple interceptions in 2016.  The Vikings will have a better running game in 2017 after drafting Dalvin Cook and signing Latavius Murray as a free agent in the offseason.  Having more balance offensively is going to open more things up in the passing game for the Vikings in 2017.  I look for Bradford to have a solid year in 2017.