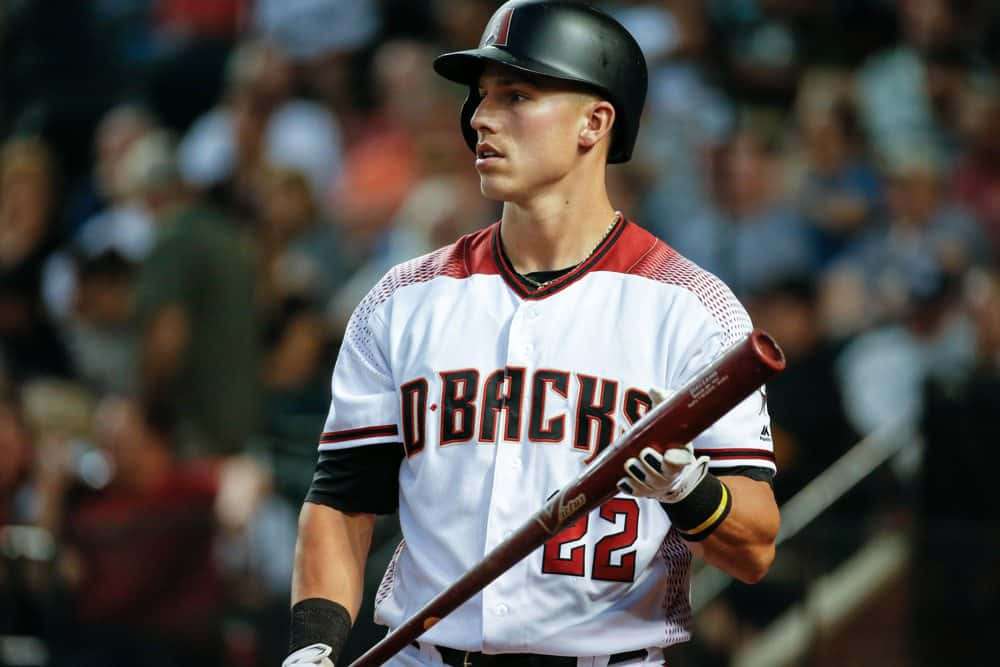 There have been a lot of breakout players and scorching hot starts so far this season. Narrowing down a list to just 10 guys was difficult. Certain players, like Ryan Zimmerman and Corey Dickerson, are having great seasons, but I don’t consider them true “breakout” players. These 10 players have always had potential, but this is the year they’ve started to put it on full display. The below list combines both 2017 performance and predicted future success.

I should probably include at least one pitcher on this list, right? Originally it was going to be Eduardo Rodriguez, but serving up four dingers to Baltimore ruined his chances. Sorry, Eduardo, you have only yourself to blame. Instead, I’ll include 25-year-old strikeout machine, Robbie Ray.

Even though his ERA in 2016 was pushing 5.00, there was some solid buzz surrounding Ray entering this year after his 11.3 K/9 rate in 174 1/3 innings. “If only he could lower his ERA,” or something along those lines, was a common phrase to say when discussing him this spring. Ray rubbed the magic genie lamp and got everyone’s wish granted. So far in 2017, his ERA sits at an even 3.00 through 11 starts. His stellar strikeout rate has remained almost identical, too, at 11.0 K/9.

Raise your hand if you predicted before the season that Scott Schebler would be leading the NL in home runs at the end of May. Anyone? I sure didn’t. Through the season’s first two months, Schebler has cranked 16 home runs to go along with a .249 average and 30 RBI. The low average has kept Schebler hitting out of the six hole most nights, which has suppressed his RBI totals.

This breakout might not have been expected, but it shouldn’t be too surprising. What Schebler is doing this season is exactly what he did in the minors. He was a .276 hitter in the minors while averaging around 24 homers per 600 at-bats. Great American Ball Park has always been favorable to hitters, too, which should only help Schebler moving forward.

All he needed was a chance to play to truly show off his immense raw power. An Adrian Beltre spring training injury created that chance for Joey Gallo. If you play in a league with a standard 5×5 category format, you’re probably pretty satisfied with Gallo’s production in four of those five hitting categories. Gallo has crushed 16 long balls to go along with 36 runs, 33 RBI, and four steals.

The only area that he struggles in is batting average. Saying he “struggles” with his average is like saying Shaquille O’Neal only “struggled” with shooting free throws. Let’s be honest: Gallo’s .207 batting average is pathetic. Probably always will be, too. Since the first time I saw video of Gallo, I’ve compared him to Adam Dunn. Nothing he’s done so far in his young career has made me change that comparison. He should continue to hit homers in bunches while being a black hole in batting average.

Everyone’s favorite April breakout player has slowed a bit after his torrid start, but he is still a dangerous hitter. Over the first two months of the season, Eric Thames has hit 14 home runs. Granted, a vast majority of those were in April. He’s really cooled off in the last month.

Those April numbers obviously weren’t going to last all season, but the dropoff from April to May is alarming. With that being said, I’m not writing him off quite yet. Pitchers have adjusted to him, and now it’s his turn to do the same. The average won’t be anything special, but Thames should be a solid power threat for the rest of the season and beyond.

Mitch Haniger might be a surprise entry to this list given how little he played before his oblique injury that landed him on the disabled list. However, his minor league track record and hot start to the season make me a believer in his future potential.

He can hit for both average and power and has good enough wheels to steal double-digit bases annually. Haniger has never been a big name in fantasy or the real world, but that’s something you can use to your advantage in fantasy leagues. He profiles as an outfielder that should contribute solidly across the board and not hurt you in any single category.

This might one of the best hitters in the league that nobody pays attention to. Jake Lamb has been absolutely raking to start the season. He currently sits second in the majors in RBI with 45 and boasts a strong .289/.376/.584 batting line. Lamb showed some power last season with 29 homers, but this year is truly his breakout season. Amongst full-time third basemen, only Miguel Sano has a higher OPS than Lamb.

Hitting in the middle of a potent Arizona lineup along with Paul Goldschmidt is going to keep Lamb’s runs and RBI totals high. He might not be quite this good moving forward, but Lamb is cementing himself as a near-elite option at the position.

It feels like Miguel Sano has been a potential breakout player for a decade now. It hasn’t been quite that long, but after years of waiting, Sano has finally arrived as a fantasy force. His strikeout rate has remained high this season. In fact, it’s the highest of his young career at 37.1%. What has helped Sano break out this season has been the fact that he’s making much better contact. His soft-contact percentage has dropped from 14.1% last season to a mere 4.3% this season. At the same time, his hard-contact percentage has risen from 40.1% to 53.3%.

Those are great numbers but likely not sustainable for a full season. Regardless, Sano is going to be a power force for the foreseeable future. Just don’t expect the average to be near .300.

I’m struggling to believe that even the Dodgers believed themselves when they originally said that Cody Bellinger would only be up in the majors for a brief time. Honestly, who was really blocking him? Adam Toles, Trayce Thompson, or Andre Ethier? Please. A recent skid has dropped his average down to the mid-.200s, but the power has remained steady since his call up.

In just 131 at-bats, Bellinger has already launched 11 home runs. There’s no denying that he’s already arguably the most feared hitter in the Dodgers’ lineup. It remains to be seen if he’ll keep his average in the .300 range or if he settles in as a .260-.270 hitter. Whichever it ends up being, Bellinger is for real.

The top two on this list are a couple of slugging outfielders from the Big Apple. Michael Conforto has always had this potential. It’s just taken him a couple years to fully realize it. As we enter June, he’s on pace for around 40 home runs, 100 RBI, and 100 runs scored. Pair that with an average that should remain close to or over .300, and Conforto have become a top-10 or top-15 outfielder.

Speed has never been an asset of his, but the rest of his production should be strong enough to offset that. I think we’re all just glad that the Mets started giving him everyday playing time.

Was there really a question about what player would be No. 1 on this list? If you’ve read my previous articles, you might think I have a man-crush on Aaron Judge. The truth is, I do. And as a Red Sox fan, it pains me because I know this guy is going to be a thorn in my side for however long he’s in pinstripes.

The 6-foot-8 Goliath can do it all. He can hit for a good average, drive in runs, and hit bombs with the best of them. Like Conforto, speed will never be a big part of his game, but he’s smart enough on the bases to steal close to 10 each season. All rise and witness the greatness.

One list done, and another one begins. Check back in next Saturday for another issue of the Fantrax top-10.