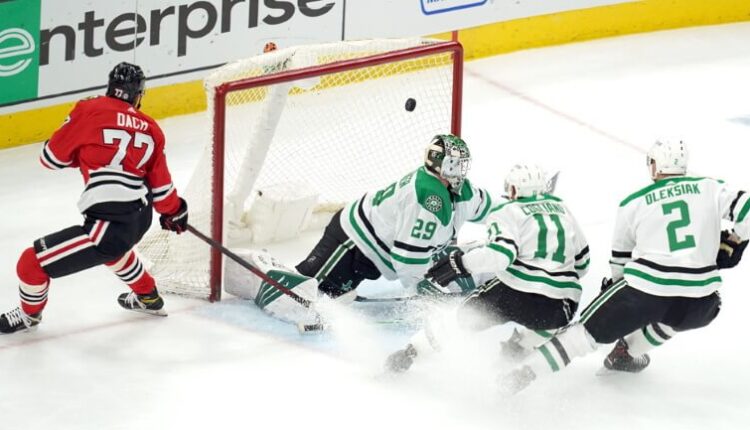 The Central Division has a clear front runner and also a clear bottom feeder. As to what happens in between is likely anyone’s guess, but that’s why we’re here, to give you our thoughts as to how each team will finish. As we did with the Atlantic and Metro Divisions, we will highlight a few key fantasy players on each team as well as someone who we see as a breakout performer this year.

1. Colorado Avalanche: The Avalanche are the clear favorite in the Central. The Avs enter this season as one of the favorites to win the Cup. They can throw out arguably the best line in hockey with Nathan MacKinnon, Miko Rantanen, and Gabriel Landeskog, all of who offer great fantasy value. On defense, Cale Makar is right at the top of the best offensive D in the game. Devon Toews and Sam Girard offer good value at defense as well. The newly acquired Darcy Kuemper is one of the more underrated goalies in the league and now that he is out of the obscurity of Arizona he should finally get the recognition he has deserved.

Newhook is a skilled player who has put up points where ever he has played. Though he is just 20 years old, it looks like he will make the jump into the Avs lineup. Having the advantage of being sheltered on the offensive side of the puck because of the presence of Mackinnon, Makar and company should allow Newhook the breathing room to show his potential as early as this season.

2. Dallas Stars: Dallas has balance and depth throughout their lineup at forward, defense and goal. The ageless Joe Pavelski is coming off an outstanding year. Calder Trophy finalist Jason Robertson and Roope Hintz will help lead the offense which will be reinforced by the return of Tyler Seguin from a season-long injury. Miro Heiskanen and John Klinburg will lead the defense. Look for Ryan Suter to have a bounce-back fantasy year as he joins the Stars after being bought out by Minnesota.

Kiviranta burst onto the scene two playoffs ago with a game-7 hat trick in the Western Conference final against Colorado. While last season did not live up to the game 7 hype, Kiviranta should be playing in the Stars top 9 in 2021-22. A natural goal scorer, a 20+ goal season should be in the cards for the 25-year-old Finn.

3. St Louis Blues: The Blues have strength down the middle with Ryan O’Reilly, Brayden Schenn, and Robert Thomas. Pavel Buchnevich is over from the Rangers. Both he and Jordan Kyrou will be sneaky good fantasy pick-ups. On defense I expect both Tory Krug and Colton Parayko to improve over last year’s numbers which saw them regress from their normal fantasy value. Jordan Binnington will get the majority of time in goal and should rank in the top 10 of fantasy goalies.

At 19, it’s safe to say that not many expected Neighbours to make the Blues as early as this season. It’s difficult to not notice Neighbours as he is a high-energy player who can score and create offense. He has earned at least 9 games with the Blues to start this season, at which point they will have to decide whether to keep him around or send him back to Junior. My bet is Neighbours is with the team for the entire year.

4. Chicago Blackhawks: What’s old is new in Chicago with the return of eventual Hall of Famer Jonathan Toews who was forced to sit out all of last year due to health concerns. There are some excellent scoring options upfront with Alex Debrincat, Dominik Kubalik, and of course Patrick Kane. Tyler Johnson will also be someone to take note of as he will have a more prominent role in Chicago than he did in Tampa. Two other new additions will be fantasy must-haves; Seth Jones and Marc Andre Fleury will both help elevate this Hawk team to a playoff contender.

Dach is the heir apparent t the #1C role on the Hawks. He will have the benefit of having Toews around this year to mentor him. Dach is a big, powerful two-way center who will be a mainstay in fantasy league lineups for years to come.

5. Winnipeg Jets: Winnipeg significantly improved their defense this offseason with the additions of Brendan Dillon and Nate Schmidt. Neal Pionk is an under-the-radar defenseman to consider. Kyle Connor, Mark Scheifele Nikolaj Ehlers are the must-haves on Winnipeg. While Blake Wheeler and Pierre-Luc Dubois should be on your radar, you may want to consider both of these players at a lower value than in previous years.  Grab Connor Hellebuyck early as he is one of the top 5 fantasy goalies in the league.

Vesalainen will likely slot into the Jets’ 3rd line this season. He has good offensive instincts and even though he may not initially get powerplay time, as a power forward who can score it may be difficult for Coach Paul Maurice to hold him back.

6. Minnesota Wild: The Wild are an up-and-coming team. They are not offensively gifted but they have 4 solid lines and 3 good defense pairings which makes them tough to play against. It goes without saying that superstar in the making, Kirill Kaprizov, will put up outstanding offensive numbers. Joel Eriksson-Ek will be someone to target in mid to late rounds depending on the depth of your league. Jared Spurgeon and Matt Dumba will supply the offense from the defensive side of the puck. Cam Talbot and Kaapo Khakonen will share the net. The Wild will need big years out of one or both of them to be able to contend for one of the wildcard spots in the Western Conference.

Pitlick is destined for a middle 6 position but as he has excellent speed and is very creative offensively, he is one Wild player to keep tabs on through the waiver wire.

7. Nashville Predators: The strength of the Predators is from their back end. Roman Josi is one of the top 5 fantasy defensemen in the league. Juuse Saros will offer above-average goaltending and help keep the Preds competitive. There are way too many questions upfront for Nashville to be able to compete near the top in the Central. Filip Forsberg continues to be the go-to offensive threat. Continued growth out of Eeli Tolvanen, as well as recently acquired Cody Glass beginning to fulfill his potential, will be essential for Nashville to stay competitive this season.

Tomasino is a fantastic offensive player who works extremely hard. He will be filling the role of #1C on Nashville for years to come. It may be a lot to ask of him as a 19-year-old to assume this role as early as this season but I expect to see Tomasino grow into his destiny as the year progresses.

8. Arizona Coyotes: Arizona has been stockpiling draft picks and they will be battling for the #1 pick overall in the 2022 entry draft. They have some key players to build around such as Clayton Keller, Jakob Chychrun, and Victor Soderstrom but as there are a number of stop-gap players in this lineup, expectations are extremely low for this season.

There were high hopes for Hayton as the #5 overall pick in the 2018 draft. It’s been a slow burn as he tries and makes his way as a regular in the Coyotes lineup. With an open shot at the #1 or 2 center ice position, Hayton should be able to establish himself as another one of Arizona’s cornerstone pieces as they rebuild their team.