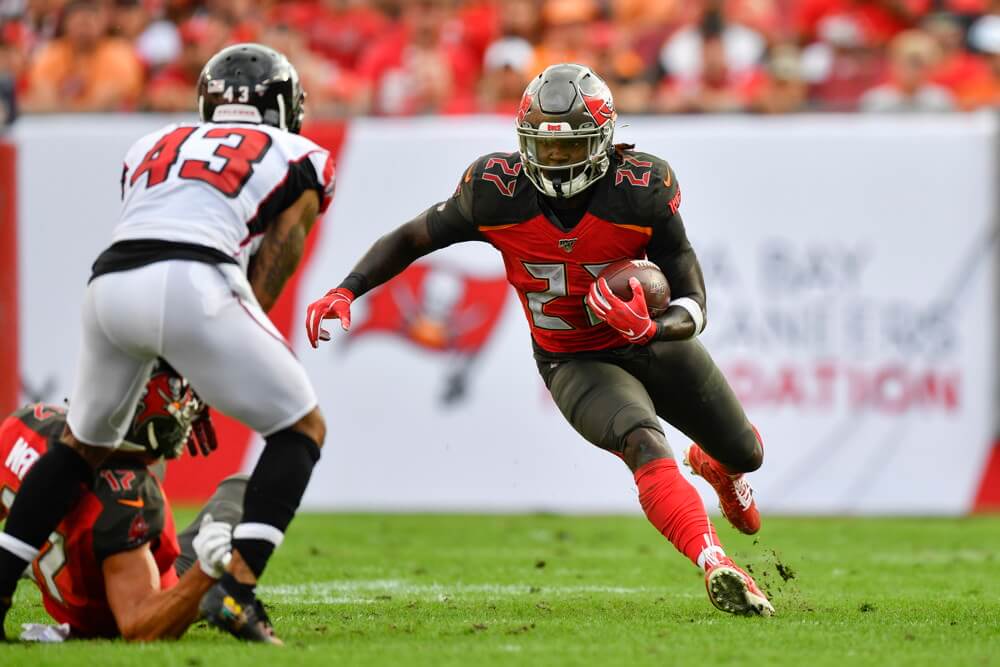 It’s that time of year again! Finally, we’re about to learn which of our favorite rookies and young upside players will earn themselves a prominent role. If your fantasy football league drafts late, training camp storylines are a must follow to ensure you’re drafting with the best odds of success. If your fantasy football league drafts early, I guess it’s a time to rosterbate over positive player news, orrrrrr prematurely worry that you picked the wrong players. Here are the top storylines in NFC Training Camps to keep an eye on.

The Redskins backfield is essentially the equivalent of Chicago’s crowded tight end group. The only difference being there are actually some talented players in Washington’s backfield. The real problem is figuring out which ones (if any) are worth drafting. There’s Adrian Peterson, Derrius Guice, Antonio Gibson, Bryce Love, Peyton Barber, and J.D. McKissic; it’s a big ol’ clown car full of running backs. True, it’s more of a battle between the top three listed names, but the bottom three still have a chance to earn snaps in what will inevitably be a muddled mess of a backfield. Many think it’s going to be Guice leading the way, but will the team have a lead runner? Will Gibson and Peterson have roles as well? What about Bryce Love? This is a backfield to avoid at the moment, but hopefully training camp will sort it out for us.

In June, Deebo Samuel suffered a Jones fracture while training for the 2020 season. This will likely lead to Deebo landing on the PUP list for the first six weeks of the season, perhaps longer if there are complications. The unfortunate injury leaves a massive void at receiver for the reigning NFC champions. Brandon Aiyuk and Jalen Hurd are the most likely to lead the team in wide receiver targets until Deebo comes back. Hurd is the current favorite due to Aiyuk not being afforded the benefits an offseason program rookies desperately need, but we won’t know for sure until training camp reports begin to come out. Keep your eyes peeled, it may net you a No. 1 receiver.

Sean McVay says he wants a three-man backfield in 2020. Do we really believe him though? Not this guy. He has three running backs to choose from at the moment. First, there’s five-year veteran Malcolm Brown who has less than 1000 total yards and a career YPC of 3.9 (Yawn). Then there’s the more talented, but so far very disappointing Darrell Henderson who at best profiles as a complementary running back in the NFL. Then there’s Cam Akers. Similar to D’Andre Swift in Detroit, the Rams made a statement drafting Cam Akers in the second round of the 2020 draft. Akers profiles as a three-down back with great upside. As Swift will, Akers will also be forced to pick things up quickly in training camp, but if he does, he’s the heavy favorite to lead the Rams’ backfield in touches by a large margin. Keep an eye on training camp reports for positive news on Akers. His value and upside make him a very nice mid-round pick.

It’s been a difficult stretch for Aaron Rodgers. Not only has he only had one 1000 yard receiver since 2016, but no other receiver has even reached 700 yards in that time. In 2016, Jordy “White Chocolate” Nelson went for 97-1257-13, while Davante Adams totaled a very respectable 75-997-12. Since then, with the exception of Davante Adams’ 2018, it’s been hurt city for Rodgers and his receivers in Green Bay. We know they have a legit No.1 receiver, but will they finally have a respectable No.2 receiver capable of 800 yards or more? They have four talented options about to duke it out for the No.2 job, and whoever wins could definitely hit that mark. The fantasy community’s favorite is Allen Lazard, as he held that role last year, but he only managed 477 yards and is no more talented than Equanimeous St. Brown, Marquez-Valdez-Scantling or Devin Funchess. Each of these four players has nice upside and has flashed. Expect all of them to have an opportunity to win the job in training camp.

D’Andre Swift was among many pundit’s pick as the best running back in the 2020 NFL draft. He was selected by the Lions with the third pick in the second round of the 2020 NFL draft. This would lead us to assume he’s going to be the lead running back in Detroit. Standing is his way is the talented, but delicate Kerryon Johnson. With a normal off-season, the odds would heavily favor Swift starting the season as the lead back, but this is obviously not a regular off-season. It will be challenging for rookies to get up to speed in time for week one with no off-season program.  As a result, Kerryon stands a chance to force a timeshare with the more talented Swift. If Swift can get up to speed quickly, the odds are good that Swift will be the top dog out of the gate. Keep an eye on the training camp updates for positive news on Swift. If he’s showing well, he could be a league winner with a friendly ADP, especially if Kerryon continues moonlighting as Humpty Dumpty.

The biggest running back battle of training camp in the NFC will take place in Tampa Bay. It’s easily the hardest to predict as well, so the training camp reports will be instrumental in choosing the right running back for your fantasy football team. Ronald Jones is a more talented runner than Ke’Shawn Vaughan, but Tampa Bay made a clear statement when drafting Vaughan in the third round. It’s likely Vaughan was chosen for his receiving and pass protection upside (two things Tom Brady wants in an RB). Ronald Jones has made improvements as a pass blocker in his first two years, but he still has a ways to go to ensure he doesn’t draw the ire of Brady or Arians. If Jones can’t protect Brady, expect him to keep a spot on the bench warm and toasty. When it comes down to it, Jones will need to show more improvement as a pass blocker to garner substantial touches. It’s just a guess, but odds are the better pass protector will win the starting job in Tampa Bay. The caliber of offense the Buccaneers have on paper makes this an extremely important training camp battle to monitor. The winner could have RB1 upside behind a potentially elite passing attack.

We have ourselves a big-time battle for starting quarterback in Chicago between Nick Foles and Mitch Trubisky. Psych! We have no battle; no battle at all. This is Foles’ job to lose. However, there is the outside chance that Trubisky makes a fourth-year leap after an atrocious 2019 that inspired several less than flattering nicknames. It’s unlikely, but anything can happen in this game we love. If Trubisky comes out hot and shows growth, he could be a late-round steal. It may sound laughable to some, but his 2018 was very respectable and Foles isn’t exactly a franchise quarterback that can’t be unseated.

Which position battles are you watching in NFC Training Camp? Share your thoughts in the comments below. Also check out all of our Fantasy Football content to get ready for the season!