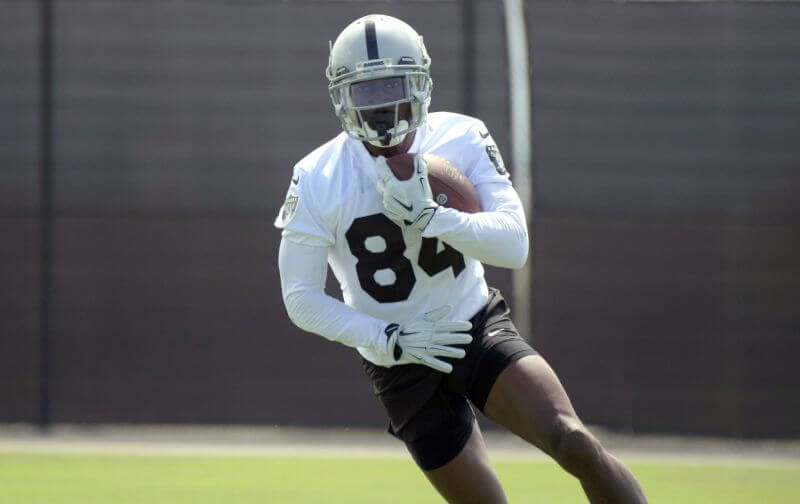 After breaking down running backs last week, we’re back at it with wide receiver busts here. One thing that I always like to reinforce is that these are guys who I don’t see living up to their draft prices. Bust is always a questionable term in my opinion but it’s fantasy football, so we have to overexaggerate as much as possible. With that in mind, let’s start with the best wide receiver of this decade.

How can this possibly go right? While Brown has been the best wide receiver in fantasy for a decade, it’s hard to endorse him after this controversial offseason. This is not going to be the sort of guy where you can look at his stats and see a definitive downfall but there are so many off-the-field issues that I just don’t see this ending well. We’re talking about one of the most volatile personalities in the league joining one of the most dysfunctional franchises.

That alone makes Brown a tough sell but moving from Ben Roethlisberger to Derek Carr certainly won’t help. We’re talking about Brown leaving the fourth-ranked QB based on QBR and teaming up with a guy who finished 27th in that statistic last season. Don’t forget about what Carr did to Amari Cooper, as he single-handedly tried to ruin his career before breaking out with the Cowboys. The simple fact is, Big Ben hounded Brown with targets and it’s unlikely that Carr will do the same thing. Since 2013, Brown actually leads the NFL in total targets and has finished Top-5 in total targets in each of those six seasons.

Carr throws way less than Roethlisberger and he only provided 7.5 targets per game to Cooper in his 52 games with Oakland. Cooper and Brown really aren’t much different at this point in their respective careers, and we simply can’t trust Carr to give us a Top-5 wide receiver.  It’s not just the targets either, as their abilities to throw down the field will definitely hurt Brown too. Over the last four seasons, Big Ben has finished Top-4 in the percentage of passes traveling at least 20 years down the field three times while Carr is averaging 26th in that statistic in the same span.

If you read my quarterback busts article last week, you probably could have seen this coming. The simple fact is, the Seahawks don’t throw enough to produce a Top-20 wide receiver. In fact, Seattle ranked second in rushing attempts last season while recording the fewest passing attempts in the league. That’s a scary thought for a guy who never had more than seven targets in any game last season while recording just 57 catches on 71 total targets.

Lockett is currently going as the 19th receiver off the board according to Fantrax ADP and I’d rather have guys like Jarvis Landry, Cooper Kupp or Mike Williams, who are going well below him. The targets from those guys are likely to dwarf Lockett’s and it’s truly a scary thought that Lockett ended up catching 57 of his measly 71 targets. That’s an unsustainable rate, especially when you consider the fact that Lockett averaged 16.9 yards per reception. He also never surpassed five receptions or 107 receiving yards in any game last year and people are only drafting him this high because of Doug Baldwin’s retirement.

His size worries me too, as it’s tough for a 5’10” wide receiver to become the focal point of an offense. That was evident last season when Lockett received just 10.7 percent of the target shares in the red zone, which ranked 86th in the NFL among all WR’s. Any guy scoring 10 touchdowns on just 57 receptions and 71 targets is due for some inevitable regression and it’s hard to see him duplicating a season like that. I do think Lockett has some serious upside but I’m simply not willing to take him in the Top-50 like Fantrax ADP projects.

Why do we keep doing this with Davis? Haven’t you had enough self-destruction in your life? Since getting drafted two years ago, we go over this massive Davis hype throughout the offseason and I’ve had enough of it. Whether it’s Marcus Mariota or Ryan Tannehill throwing the ball, we simply can’t trust Davis. We’re talking about a guy who has 99 receptions on 177 targets throughout his career, as he’s a victim of this terrible quarterback play. This isn’t so much about Davis’ talent, as it’s more about this offense. Not only did Mariota and Tannehill both rank outside the Top-20 in Raw QBR last season, but this also happens to be a run-first offense.

That was crystal clear when they ranked 31st with 27.3 pass attempts per game last year and 28th in that statistic in 2017. That’s simply not enough targets for any wide receiver, especially a guy who’s drafted in the Top-60. Over his final seven games last season, Davis averaged only 5.1 targets per game, with Tennessee running Derrick Henry into the ground. Davis very well may have all the talent in the world but as is the case with several of my wide receiver busts, he simply can’t succeed without the opportunity.

Adam Thielen (MIN) – I really like Thielen as a player but this price tag scares me with how he played at the end of last season. The Minnesota WR had just 20 receptions and 235 receiving yards over his last five games, which equates to four catches and 47 yards per game. That’s a frightening four-game stretch from a guy who’s going as a Top-10 receiver, especially with Dalvin Cook likely taking over this offense.

Dante Pettis (SF) – I actually believe that Pettis is being drafted right around where he should be but I’m not so sure he’s going to play as big of a role as everyone else does. The 49ers have acquired a gluttony of talent, as they now have to feed Tevin Coleman, Jerrick McKinnon, George Kittle, Jordan Matthews, Deebo Samuel, Marquise Goodwin, and Trent Taylor. That’s a lot of mouths to feed and it’s tough for me to trust a wide receiver who’s only had a handful of good games in his career.

Which wide receiver busts are you staying away from in 2019? For more great analysis check out the 2019 Fantrax Fantasy Football Draft Kit.