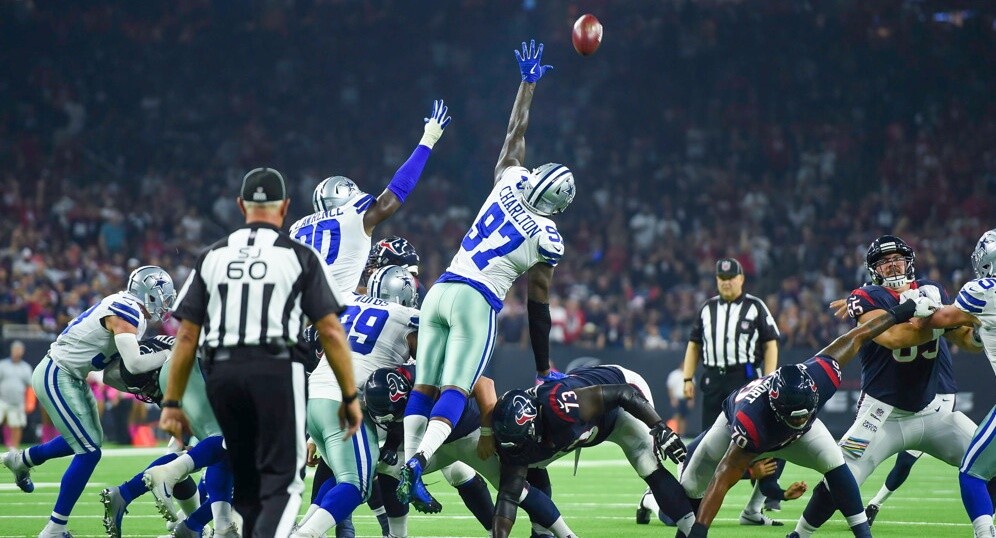 Bye week blues got you feeling blue? Gary Davenport is here to turn that frown upside down with his favorite IDP sleepers for Week 6 of the fantasy football season.

As if IDP owners didn’t already have enough problems.

There was already a mounting pile of injuries to prominent individual defensive players to deal with. That pile got all the bigger after Week 5. In last week’s loss to the Indianapolis Colts, the Kansas City Chiefs lost both defensive tackle Chris Jones (groin) and inside linebacker Anthony Hitchens (groin) to injuries that will more likely than not sideline them in Week 6. It was that much worse for Baltimore Ravens safety Tony Jefferson—he suffered an ACL tear that ended his 2019 season in last week’s overtime win over the Pittsburgh Steelers.

Now, the first of the four-team bye weeks are here. Tremaine Edmunds of the Buffalo Bills won’t be playing. Neither will Roquan Smith of the Chicago Bears. Or Darius Leonard of the Indianapolis Colts (not that he has been anyway, although he’s cleared the concussion protocol and should finally return in Week 7). Or Tahir Whitehead of the Oakland Raiders.

And that’s just at linebacker.

More IDP owners than ever need a sleeper—a spot-starter owned in 20 percent or less of the IDP leagues at Fantrax they can plug in as a starter in Week 6.

Here’s hoping these players wake up.

A former first-round pick of the Dallas Cowboys, Charlton’s NFL career never got off the ground in Texas. He told Alain Poupart of the Miami Dolphins website that he still feels he can have the sort of professional career as a couple of his NFL and college teammates in his new home in South Florida.

“I was blessed to be behind DeMarcus (Ware) in Dallas, so I could learn a lot of his stuff. I grew up behind Frank Clark at Michigan, so I was able to learn a lot of stuff he did. He had a great past couple of years with Seattle, now with Kansas City. They’re guys who have my same body mold — long, lanky, can use their arm length, fast twitch — guys who I can just mirror. I always tell people that everybody’s body moves different, so you can do the same exact thing they do exactly how they do it, but you make it fit your body the way you move and you can make it successful.”

Charlton’s off to a good start with his second team, logging sacks in each of his first two games with the Dolphins. The Dolphins are admittedly terrible, but so is Washington’s pass protection—three games in a row with a sack isn’t at all out of the question.

“Washington is terrible in a way that will prevent it from becoming anything else but terrible,” Tanier wrote. “It is unlikely to attract anyone who can bring fresh ideas or energy to the organization, and if a true innovator does arrive, it surely will trigger a power struggle. Any top prospect or quarterback of the future within the organization will then be trapped in that power struggle, which could ruin him. Meanwhile, Daniel Snyder will sip wine, watch Imax movies on his yacht and wonder why so few people will purchase merchandise with the team’s name on it.”

However, the team isn’t completely without talent—especially at defensive end, where Washington sports a pair of young bookends in Jonathan Allen and Matt Ioannidis. Sunday the Redskins travel to Miami to face a Dolphins team that might be even more talent-bereft than Washington is. And both Allen and Ioannidis should make some hay against a Miami O-Line that is offensive in every sense of the word.

Two weeks ago, Josh Bynes was sitting on his couch watching football. Last Sunday in Pittsburgh, Bynes was playing inside linebacker and directing traffic for the Ravens in an overtime win on the road against their most hated rivals. Per Andrew Gillis of NBC Sports Washington, Bynes is much more comfortable doing the latter than the former.

Bynes played remarkably well in his first game action since November, logging five tackles and an interception in just 60 percent of the team’s defensive snaps. Given how well he played and how much better Baltimore’s defense looked when Bynes was on the field, his snap count is going to go up this week at home against the Cincinnati Bengals making him one of my top IDP sleepers for the week.

As I mentioned earlier in this piece, Anthony Hitchens left last week’s loss to the Colts after injuring his groin, which is the sort of injury that can linger. Hitchens practiced in a limited capacity Wednesday, but as Walton Spurlin wrote at Fantasy Pros if Hitchens can’t go Sunday against the Houston Texans fifth-year veteran Damien Wilson is ready to step into the void.

“It’s still unclear how much, if any, time Anthony Hitchens could miss after leaving Week 5 with a groin injury,” Spurlin said. “He was unable to return to the game and Wilson stepped up. He put up 12 total tackles while playing 79% of the snaps. He has put up 20 total tackles in the past two games. The Texans’ offense allowed 21 combined total tackles to De’Vondre Campbell and Deion Jones last week.”

Five games into the 2019 season, it’s actually Wilson, and not the more-heralded Hitchens, who leads the Kansas City defense with 35 total tackles. Those stops didn’t all come last week—even if Hitchens does play, Wilson has some IDP value. If Hitchens can’t go against the Texans, Wilson will have quite a bit.

As a first-year cornerback thrown to the wolves in the NFL, Murphy has had his share of ups and downs over the first five games of his pro career. But as Scott Bordow wrote for the Athletic, Cardinals head coach Kliff Kingsbury has been impressed by both the level of play and maturity of the former Washington standout.

“He’s been game to everything and hasn’t blinked, so that’s encouraging for us,” Kingsbury said. “We know there are going to be some ups and downs and there’s some dynamic players he’s going to be asked to cover that it’s going to be tough, but I believe he’s up for the challenge mentally and will keep getting better.”

IDP owners have been plenty pleased with this year’s living embodiment of the “rookie corner rule”—over the last two weeks, Murphy’s piled up 13 solo stops—including a nine-tackle, eight-solo effort last week against the Bengals. Heading into a matchup with an Atlanta Falcons team that has given up fantasy points in buckets to defensive backs, Murphy’s a viable spot-start even in IDP leagues that don’t require the cornerback position.

When the Arizona Cardinals released strong safety DJ Swearinger recently, the general belief in the IDP community was that rookie Deionte Thompson would get the first crack at replacing the veteran. Well, both Thompson and fifth-round supplemental draft pick Jalen Thompson saw the field quite a bit last week against the Bengals, but it was Jalen who both played more snaps and had the better day statistically, finishing with eight total tackles.

Thompson admitted to Bob McManaman of the Arizona Republic that he didn’t quite expect to hear his number called this early in his NFL career.

“I’m ready to go,” Thompson said, “It was kind of unexpected. But me and D.T. are both ready for the job and we’ve just got to make plays.”

It was Jalen who made for plays against the Bengals—and that means he gets the nod here against a pass-heavy Falcons team that will likely force the Cardinals into a lot of three-safety looks. No team has allowed more fantasy points to defensive backs this year—so many that both Jalen and Deionte may well wind up at least serviceable spot-starts by the time the dust settles.