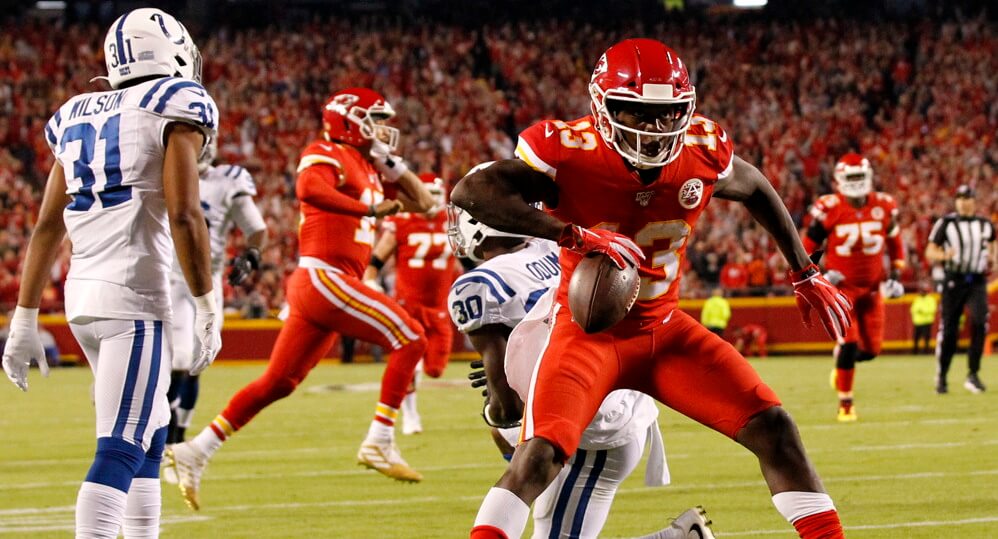 Strap yourself in, because this is when things really start to get challenging in Fantasy Football. The past two weeks, only two teams were on byes. Well, the Miami Dolphins didn’t even count last week, so we were really only affected by the Lions being idle. You may have not spent too much of your Free Agent Acquisition Budget, also known as FAAB, in Week 5.

Beginning in Week 6, though, four teams are on byes. That will be the case in six of the next seven weeks. You will have to start tapping into your reserves and rolling out less than ideal lineups. But we’re not going to feel sorry for you. We’re all dealing with the same challenges. Overcoming it is what ultimately determines the true winners in Fantasy Football.

There isn’t much to be found in terms of immediate impact players on your free agent list this week. We do have some important recommendations that could help you later, though, if not now. In terms of our RB suggestions, it’s more about safety in case of injuries.

If your league doesn’t use the FAAB process you should also check out our Week 6 Waiver Wire.

Chase Edmonds, Arizona (36 percent owned in FanTrax leagues): He saw his snap count elevate to 35 percent in Week 5 and scored on a 37-yard TD run. Edmonds finished with 86 scrimmage yards and must be owned more widely by those who have David Johnson. An essential handcuff like Edmonds must be rostered by the D.J. owner. If Johnson gets injured at any point, Edmonds will become an immediate impact Fantasy RB2. Recommended FAAB Bid: 10 percent of your budget, Johnson owners only.

Jordan Wilkins, Indianapolis (26): Smart Fantasy owners had him at the ready in case Marlon Mack was not able to play this week, but the Colts starter admirably played very well despite being deemed a game-time decision because of an ankle issue. Wilkins actually saw some goal-line work and has a short-yardage TD called back because of a penalty, and he nearly scored a play later. Wilkins, who tore off a 55-yard run in Week 2, may get to start at some point. Mack has been a game-time call twice so far this season. Recommended FAAB Bid: 10 percent if you won Mack, four percent if you don’t.

Reggie Bonnafon, Panthers (36): We may have finally identified the handcuff to Christian McCaffrey. CMC actually needed some breathers on Sunday and Bonnafon played 17 percent of the snaps, a season-high for any backup Panthers RB. He also came through with a 59-yard TD run. Our pickup emphasis at RB this week is on handcuffs that are still available, as impact RBs on free agency are very scarce. Bonnafon is now a viable handcuff. Recommended FAAB Bid: Six percent of your budget, McCaffrey owners only.

Byron Pringle, Chiefs (1): How surprising was his breakout performance on Sunday night? This second-year undrafted free agent is barely owned in any FanTrax dynasty leagues! Pringle caught six passes on nine targets for 103 yards and a TD. Mecole Hardman and Demarcus Robinson have been erratic, so Patrick Mahomes started trying to work with a new potential target, and the results were indeed impressive. Pringle could get more opportunities for significant contributions if injuries continue to be an issue at WR for Kansas City. But keep in mind different players have rotated as premier playmakers for Mahomes while Tyreek Hill has been out. Recommended FAAB Bid: 14 percent. We will spare you any of the bad potato chip puns you may see elsewhere and remind you Pringle’s Fantasy relevance may be short-lived.

Darius Slayton, Giants (11): Sterling Shepard is in the concussion protocol for the second time this season, and Slayton played a season-high 65 percent of the snaps in Week 5. He finished with 62 receiving yards, including a 35-yard TD reception. He also finished with 82 receiving yards in Week 3. Slayton is certainly demonstrating some upside early in his career and could complement Golden Tate going forward if Shepard is out awhile. Recommended FAAB Bid: 14 percent.

Mohamed Sanu, Falcons (71): His ownership percentages are lower on other sites, and he should definitely be added as a bye week plugger in the 29 percent of FanTrax leagues where he is actually available. Sanu totaled 164 receiving yards in Weeks 3 and 4 and caught his first TD pass of the season in Week 5. He has been a bit overrated and miscast as a Fantasy WR3 at times in the past, but he is an ideal fill-in as the Falcons will continue to throw a lot. Recommended FAAB Bid: 18 percent.

Gerald Everett, Rams (43): The coaching staff had vowed to get the TEs more involved in the Los Angeles offense, and Everett delivered a career performance in an epic battle at Seattle on Thursday. He caught seven passes for 136 yards, regularly breaking tackles and eluding defenders. At such a thin Fantasy position, he is worth the flier, although he could revert to mediocrity quickly. Recommended FAAB Bid: A cautious nine percent.

Chris Herndon, Jets (58): A reminder that he is now due to return from his suspension. Sam Darnold may be back soon, and the two seemed to have a real on-field rapport with each other as rookies. Herndon could carve out a trusted role as a frequent TD threat for Darnold. He can ideally slide into the big target role. Recommended FAAB Bid: 16 percent.

Teddy Bridgewater, Saints (28): His increasing comfort level in the Saints offense was evident in Week 5, as he let loose for a career day vs. the Buccaneers with 314 passing yards and four TDs. He finally “unleashed” the deep ball, completing three passes of 20-plus yards downfield. Bridgewater has quality weaponry in New Orleans and is worth an add as a backup if you need one. It seems Drew Brees is not quite yet on the verge of returning. Recommended FAAB Bid: Six percent. Some owners have actually cut Brees in some leagues, though, and that is a 45 percent recommended bid if you need a QB upgrade.

Gardner Minshew, Jaguars (50): He posted a career-best 374 passing yards in Week 5 and has thrown two TD passes in four of five outings as a rookie. He has also rushed for over 40 yards twice. Minshew doesn’t have a high Fantasy ceiling but he has quickly become a viable backup. Recommended FAAB Bid: Six percent if you need the QB2 in a one-QB league.